In 1963 Pete & Toshi Seeger & their children left America for a trip around the world, visiting 22 countries in 10 months.

While they were in Australia Pete visited the (Sydney) Bush Music Club where Pete was very impressed by traditional singer Harold "Duke" Tritton, source of many traditional songs & an outstanding songwriter & poet. He even called Duke on stage to join him at a concert, a call not appreciated by a teenage folkie who wanted to hear Pete, not an old Australian bloke. Soon after the teenage folkie became a convert to bush music & an admirer of Duke. (source - Ralph Pride)


(Weevils in the Flour) The song has an interesting history bound up with the folk song movement, Australian literature and Australian industrial history since the 1930s depression. A history so interesting that the song has accreted a fair amount of folklore itself. Sometimes it is published as an anonymous song written in Newcastle in the 1930s. It was one many new Australian songs that a small gathering of Sydney folkies in Barbara Lysiak's home sang to Pete Seeger during his visit in 1963.

In 2009 a video Pete Seeger Live in Australia 1963 was published from recordings made on this tour.

Pete's interview with Duke This crackly video was made from a copy of the original film given to the Bush Music Club.
~~~~~~~~~~~~~~~~~~~
Earlier contact with Pete
Minutes Friday 26th June, 1957 mention a letter from Pete Seeger, which unfortunately has not survived.

Minutes 1957-1978. This was to thank BMC for a donation to his legal expenses relating to his appearance at the House Un-American Activities Committee - conversation with Dale Dengate 5th June 2020 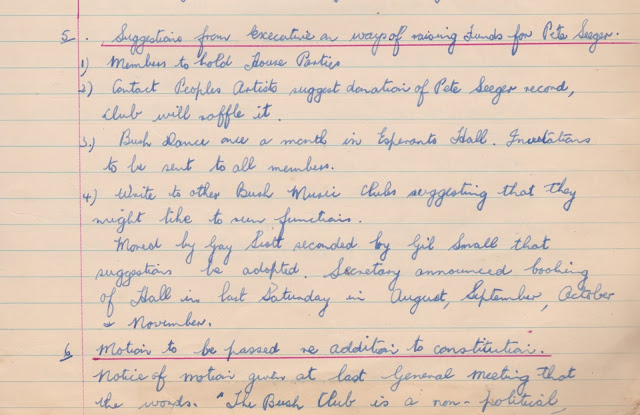 Extract from minutes 3/7/1957, page 1Extract from More than a Life - John Meredith & the Fight for Australian Tradition by Keith McKenry, p.189

Suggestion made by Brian that nights at private homes be held to hear Pete's records before raffles are held.

General Meeting minutes 2nd May, 1961 - Correspondence The Secretary wrote to "Singout" of America to find out the facts of the Pete Seeger case which who was reported in a Sydney newspaper as having been jailed for a year for contempt of Congress. 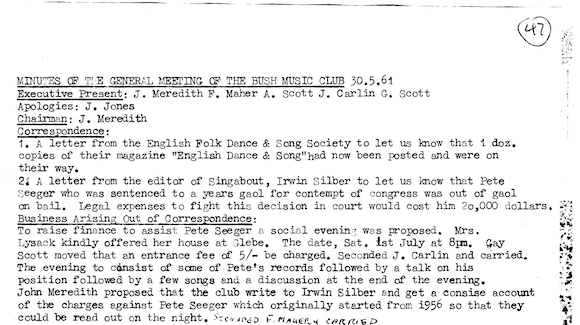 General Meeting minutes 30.5.61 - Correspondence - letter from Irwin Silber Editor of SingOut - Pete Seeger is on bail - legal expenses will cost 20,000 dollars. Business arising - Social evening proposed to raise finance to assist Pete Seeger, Sat 1st July - club to write to Irwin Silber for concise account of the charges from 1956 to read out on the night. 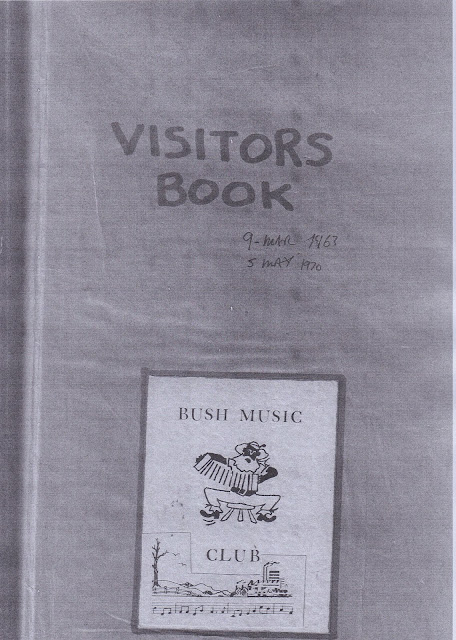 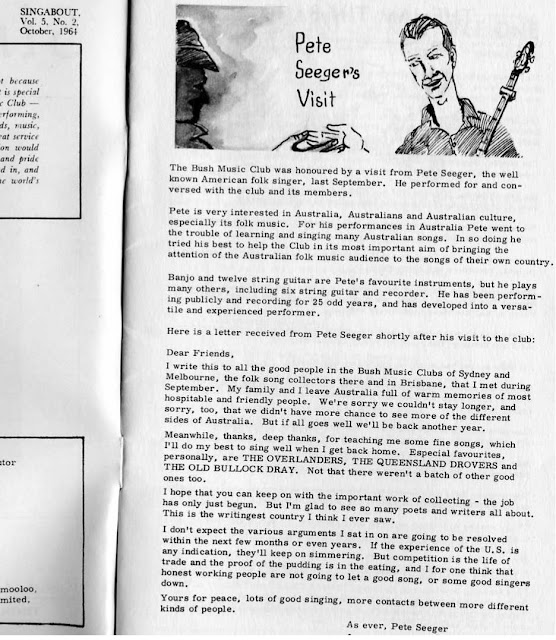 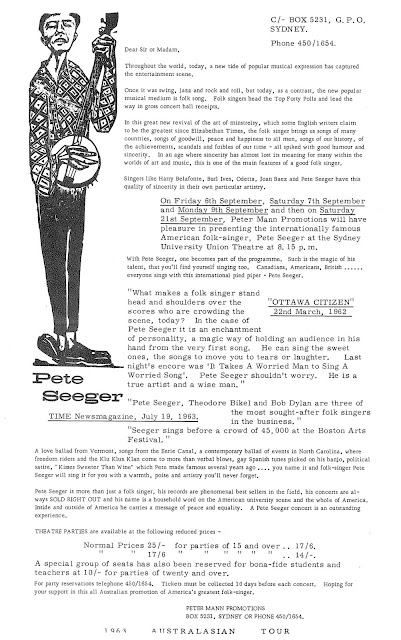 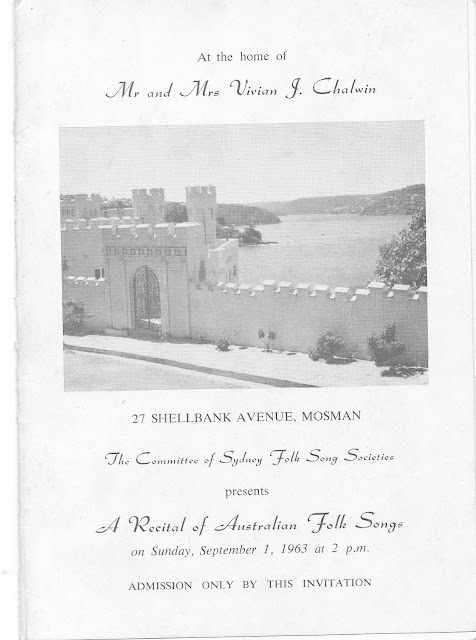 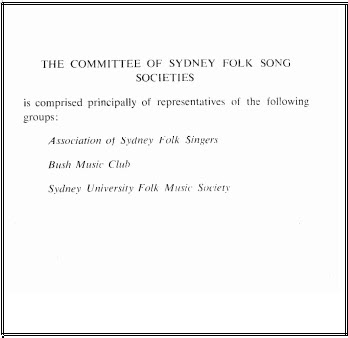 Extract from Victorian Folk Music Club member David Lumsden's memories of Pete Seeger's visit
In 1961 my father was part of the organising committee of a concert to raise money to assist Pete Seeger during Pete's House of Un-American Activities trial. (Pete, of course, was only one of hundreds of people accused of being un-American during the McCarthy era.) At this concert I met fellow committee member, Wal Cherry, Director of the Emerald Hill Theatre Company
...  early 1963. That same year, I recorded the LP Moreton Bay‚ with Martyn Wyndham-Read and Brian Mooney. (By this time I had taught myself to play guitar. Later I bought the 12string guitar that Trevor Lucas had bought from Peter Laycock. I still have that monster: it has a neck like a tree trunk!) I also traveled to Sydney with my parents to meet Pete Seeger and his family. I sang at a welcome concert with many Sydney performers, including Alec Hood and Chris Kempster. At Pete Seeger's Melbourne concert, held in the Town Hall, I sang one song with Pete, plus the (notorius!) National Anthem.
-----------------------------
Song by BMC members Alan Scott & John Dengate 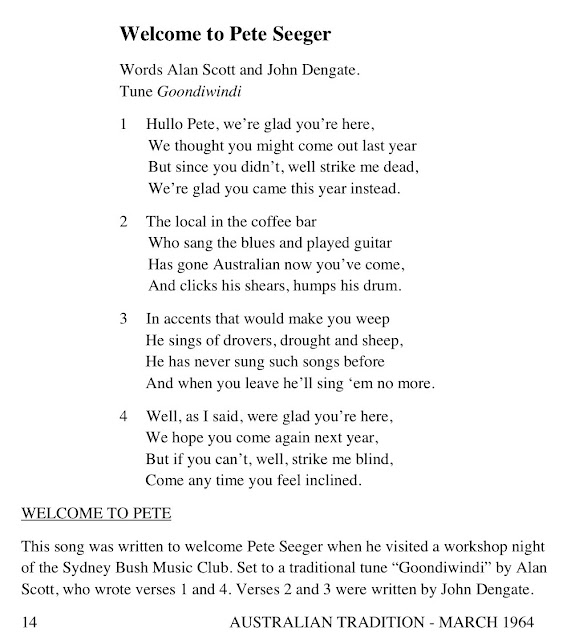 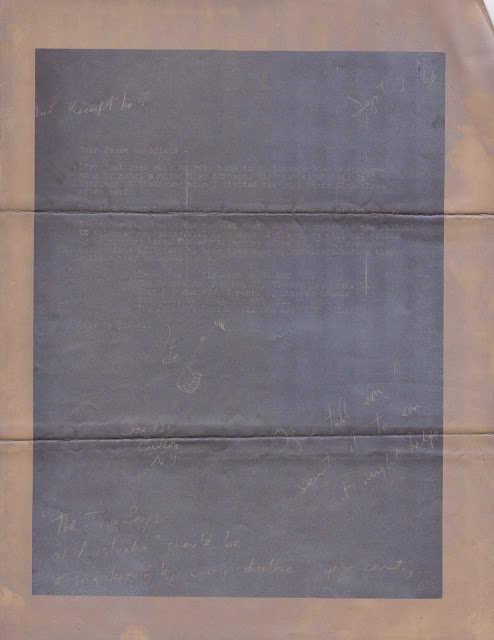 Original found with Correspondence in 2016 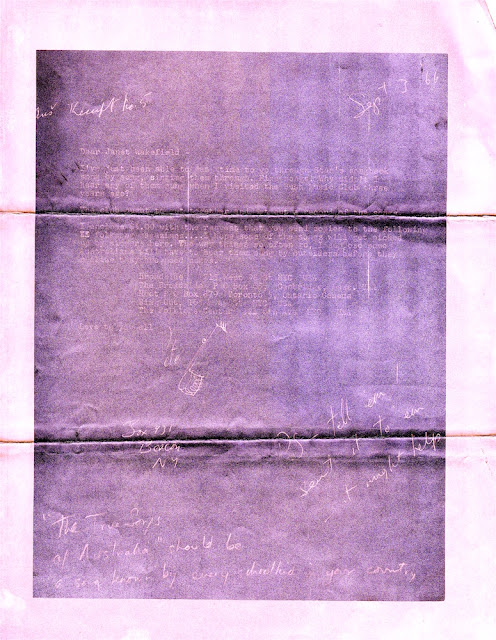 Aus Receipt No. 5     Sept 3 '66
Dear Janet Wakefield -
I've just been able to put time to go through Stan's songbook song by song, singing them through. Fine songs. Why didn't I hear any of them sung when I visited the Bush Music Club three years ago?
The club ought to get together and put out a record of the songs.
I enclose $5.00 with the request that you send copies to the following folk magazines.... I hope some of the songs will get picked up by singers here. The way things so often go, I suppose some Australians will have to hear them sung by outsiders before they realize they are good songs. 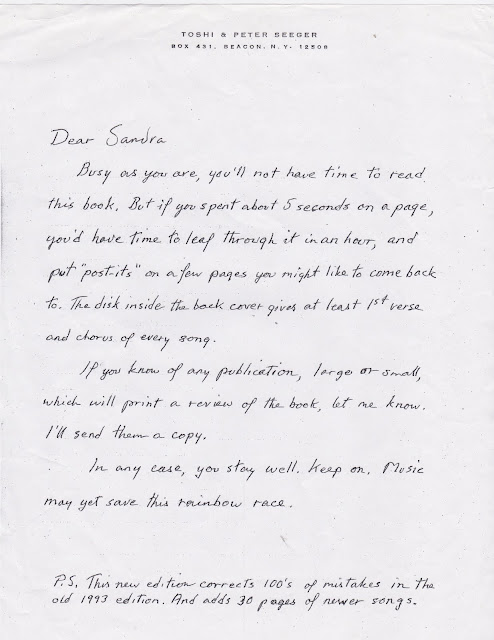 Where Have all the Flowers Gone – A Singalong Memoir
by Pete Seeger, Revised Edition, 2009 plus CD
A Sing Out! Publication with W.W. Norton & Co., New York & London
$?? From ???

This is a wondrous book … 320 pages of story, verse, reminiscences, music, photos and autobiographical tales from the long and fruitful life of Pete Seeger – all bound up in an American 11” x 8½” format song book.
This is the revised and expanded third edition of Pete’s book, originally published in 1993 and then revised and expanded in 1997 .. And a long way down the track from the little blue ‘Pete Seeger Song Book‘, the remnants of which, having survived my wanderings of the 1960s, are now held together which a bulldog clip so they don’t disintegrate all over my bookshelf.

This is much more than a song book. Pete gives the background, the sources of inspiration, the politics of the days of many seminal songs … the conscious (and, often unconscious) sources of tunes, rhythms and presentations that seem to many of us to have been around all our lives. As a consummate musician – growing up in a family of musicians and music educators – Pete’s knowledge of his sources shames most of us who seek to find and draw upon the traditional music forms of our own regions. As a man driven by moral awareness, he is often forced to admit to “stealing” tunes … either unconsciously (which is fine, within the “folk process”) - but also being aware of the appropriation – when the tune was just right for a noble purpose.

Whatever the sources (and they are all detailed in this magnificent volume!) Pete gives the music for every variant … from how he wrote it – to the versions developed in groups he sang with – to the inspired changes often made by other groups whose popular releases are often the ones we all know … and frequently adopted by Pete.
Anyone aiming to work through all the variants and developments detailed in the book will appreciate the included CD, which has musical examples from some 267 of the book’s songs. It is certainly a long way from my 1960s struggles trying to turn a rudimentary grasp of guitar into a convincing rendition of the “dots” on the crumpled pages of my little blue book.
I can’t find any evidence of a local distributor for this wonderful musical memoir. It is published for Sing Out! By W.W. Norton and can be ordered direct from <www.singout.org> … for US$24.95 + p/p.
Review in Mulga Wire, Dec 2009
**************************************************************************
Posted by secretary at 20:02 No comments: