Launch of John Dengate's third book - May 2012 by Chris Woodland

Songs, Poems, Satire and Shouts All the Way

Of all the giant slayers now afoot in the great Australian political, commercial and media deserts, John Dengate’s sword is the sharpest. (Adapted from a Gore Vidal statement regarding journalist John Nicholls.) 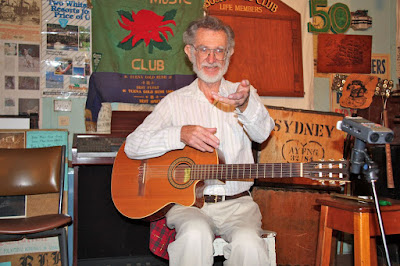 About a century ago Lord Northcliffe stated: News is something someone somewhere wants to suppress, all the rest is advertising. Ironically, I can imagine that that particular Lord Northcliffe could be one hereditary Lord that John Dengate agrees with, at least in that utterance. For John abhors deceit, deception, pretence and all those other antonyms of honesty and sincerity. John sees through the cleverly manufactured bulldust that the PR people throw at us. John throws their deceitfulness right back at them; John is fair dinkum.

Now, fair dinkum is a very important Australian word. The New Zealand-born Australian philologist Sid Baker – a man for whom I have the utmost respect, tho’ he’s no longer with us – collected definitions of what it was to be an Australian. It dates back to the outback when men had few rights but lots of hardship; it relates to the origins of the trade union movement when men had to rely on their mate and others like them for survival. These men were mainly itinerant workers who were attempting to earn a living to support their wives and children back home in the town, city, or on the farm.

Sid Baker had much to say about this Australian character. Here are a few examples: Australians possess - 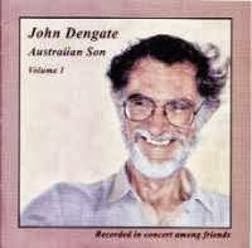 I don’t apologise for my earlier – what some people would call – plagiarism. Arlo Guthrie said of his father - the immortal Woody Guthrie - that Woody’s habit of borrowing tunes and lines from traditional songs may now be called plagiarism, but was, in his father’s day, just a natural part of the folk process. And, of course, it still is today. It must be, because in 1982 our very own John Dengate wrote: Purloining tunes and writing parodies are time-honoured processes, so I refuse to apologise.

I first met John in 1962. He was, as he is now, a quiet bloke, but when he stood up to sing or recite his presence was both authoritative and commanding. From his sharp mind and feeling soul came original works of someone who had mastered the English, or rather, the Australian English language, and could use it in its many forms: poignancy, humour and insight; with a great knowledge of history, and a passion for simple, natural justice for all. Like many of us here today I was brought up with these values, but here was a young man who could articulate them better than anyone else I’d ever heard, or perhaps will ever hear. His photographic memory ensured that his songs and poems, and the songs and poems of innumerable others was in a safe place, and ready for delivery at the drop of a hat, or the offer of a beer, or more seriously, to drive the nails in the coffin of some powerful human-imitating monster who had spent their life – nay, existence - as some despotic, tyrannical, heartless machine.

No doubt such genius would have surfaced somewhere, at some time; it was irrepressible. Fortunately it was the Bush Music Club that offered itself as a sounding board, then as an outlet, for this talented man who became recognised as a National Living Treasure in the Australian folk world. The Bush Music Club owes a great debt to Dale Morgan for directing - perhaps enticing? - her work colleague, later to become his wife, along to the BMC in the first place.

As already stated, I was amazed and impressed by this young, quiet man who not only sang and recited, but wrote poetry, sang rebel songs and songs of the oppressed, and of satire - very articulate, witty, well-crafted songs.

Every week BMC members would arrive at the meeting room in Clarence Street anticipating another of John’s gems:

Later
Little Harold Went Swimming…  Many were still suffering from the well-conditioned cringe.

The Libellous
My Old Father’s Name

The Humorous, of which many are very serious indeed!
Train Trip to Guilford


My Tongue Goes Bungling Through Georgia


If I’d Been Tony Blair’s Mother

The Tunes
Mostly John cleverly selects tunes with a similar title and/or theme such as the It’s a Long Way to Tipperary tune was selected for his Long Way to Cunnamulla.

Slim Dusty’s When the Rain Tumbles Down in July was used for When the Pope Comes to Town in July.

The tune Little Fish, used for Little Harold Went Swimming, was a natural for a Prime Minister who decided to emulate piscatorial pursuits in a tempestuous ocean.

In 1965 – the 50th anniversary of the Easter Uprising in Dublin - John wrote the tribute, The Answer’s Ireland, to Roddy McCorley.

There will be no prize given this evening for determining which tune was used for My Tongue Goes Bungling Through Georgia. It is sufficient to say that the tune, like all the others is very apt.

The Book
The title, Songs, Poems, Satire and Shouts All the Way just about says it all. 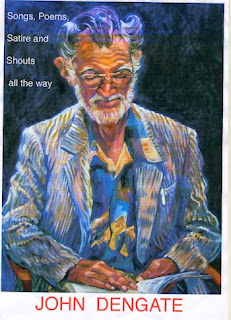 The Cover was painted by John and Dale’s good friend, Kate Scott. The portrait is life-like and is truly a fine work of art. Many will know of Kate, who is lead fiddler and co-ordinator of the Canberra-based Scottish band Strathmannan.

Dale Dengate had the onerous task of putting the book together. Dale, as many may not know, has, for many years, been a tireless worker for the folk movement and other socially aware bodies. She has been very active with the Folk Federation and has had her finger in many National Folk Festival pies. Also, living with the songwriter and having first-hand knowledge of his work made it that little bit easier, perhaps less difficult might be the correct term. Thankyou Dale.

We have the Bush Music Club to thank for the costs of publishing the book with profits intended to further the aims of the club. That is, to spread the knowledge of Australia’s traditional songs, ballads, dances and the spoken word. All profits from the book will go towards those aims. We are hopeful that funding can be found to digitise and put online some of John Meredith’s collection and the collections of others.

Thankyou for all attending tonight. If you don’t already have a copy of the book buy one, you will not be disappointed. If you do have a copy buy another in case you lose the first one!

I declare John Dengate’s SONGS, POEMS, SATIRE and SHOUTS ALL the WAY launched. 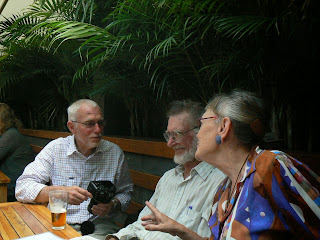