From the Archives - Charlie Mopps 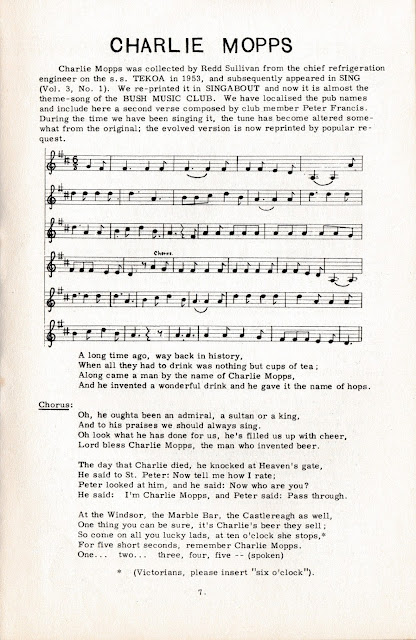 It was collected by Redd Sullivan from the Chief Refrigeration Engineer on the SS Tekoa in 1953. The second verse was written by BMC member Peter Francis, and the last verse sent by an English contributor Tam Murrell from Twickenham. BMC members localised the pub names and it became almost the theme song of the club and is still wildly popular 60 years later.

We considered it an English song (the SS Tekoa was English ... ?). Admittedley, by the 1960s Poms were saying they had never heard the song ... but they weren't on the SS Tekoa!

It is interesting that Eric Winter's The Challenge Songbook also cites the collection of the song by Redd Sullivan, from the chief refrigeration officer of the SS Tekoa in 1953. I must reread our entry on the song ... it may be that publication in our Singabout magazine drew on other primary sources ... or that The Challenge Songbook drew on us ... who knows? (I'll try to find out!)

BTW: Joe Offer - I remember the: "A bushel of hops... shilling and tuppence in tax" stanza as having: "Shame! Shame! Shame!" chanted after it (and before the standard chorus) in much the same way that "1,2,3-4-5" follows the "... ten o'clock she stops" stanza.

It sounds music hally, but I'm pretty sure it isn't. Classic music hall material (because of the activities of licensing and watch committees) rarely includes the name of God other than in sticky sentimental songs. My guess is that this is 1930s or later and probably originated with a Young Communist League song writer. I seem to remember it appearing in an early issue of 'Sing' magazine, but can't for the moment lay my hand on the copy.

SING (UK Magazine which ran from 1954 through to 70s. Edited by Eric Winter)

Redd Sullivan - What a Man!!! The version I recall him singing many times, at Curly d'el Monte's Poles Apart in Auckland was akin to the one above...

MANY MANY years ago, way back in the early '60s, my sister had a Swedish pen pal with whom she exchanged records. One of those she received was by someone called Hans "Hasse" Burman with "Balladen om Charlie Mopp" on one side!!

Bill Weeks: I'm sure the song never appeared on the British "legitimate" stage ... it would never get past the Lord Chancellor (or whoever issued imprimatur for acceptable stage fare. However, someone might argue that really classic music hall material was what happened, in the early part of the 1800s, before it went "legitimate" ... when a bunch of Cockneys would rent a shop front and turn it into a "music hall" ... until authority descended on them - and they scarpered with the takings and a rent bill (if not a bill for repairing the unauthorised "renovations"!).

However, it probably comes out of the left end of working class ... and, obviously with the Redd Sullivan connection, the merchant marine and maybe a Navy one too: " ... ought to be an Admiral ... &c ... ". The merchant marine connection certainly explains it turning up all round the world, even sapper82's Swedish "Balladen om Charlie Mopp"!
-----------------