Click images for larger size.
Bob Bolton has been searching through our Archives & gathering items of interest. It is amazing what our founders & founding members accomplished in the first 12 months. 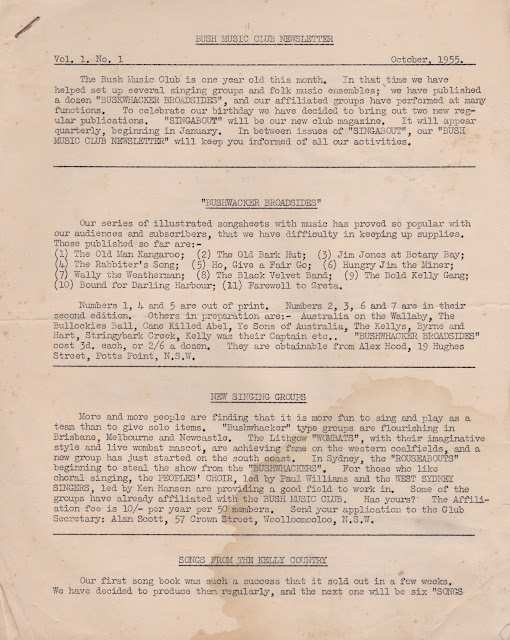 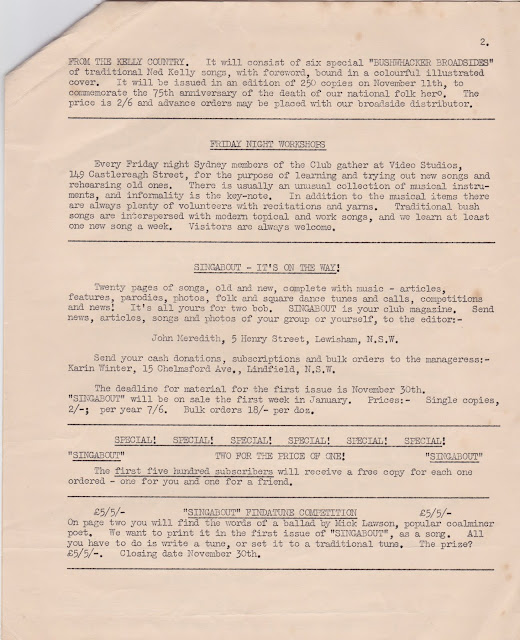 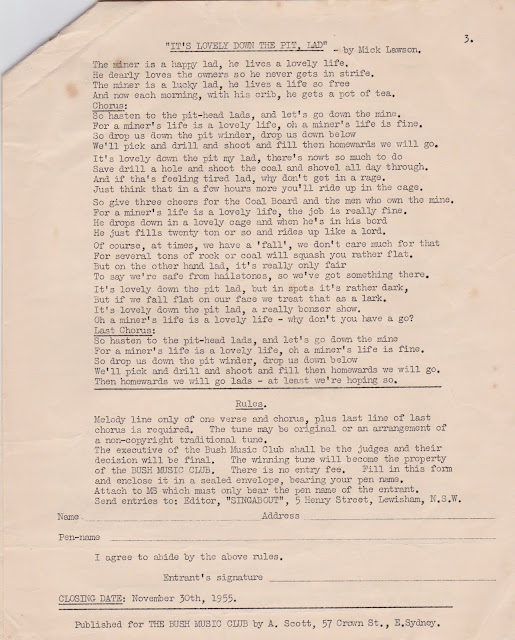 The newsletter was not illustrated but pictures of relevant items have been added.

Numbers 1, 4. and 5 are out of print. Numbers 2, 3, 6 and 7 are in their second edition. Others in preparation are:- Australia on the Wallaby, The Bullockies Ball, Cane Killed Abel, Ye Sons of Australia, The Kellys, Byrne and Hart, Stringybark Creek, Kelly was their Captain etc.. “BUSHWHACKER BROADSIDES” cost 3d. each, or 2/6 a dozen, They are obtainable from Alex Hood, 19 Hughes Street, Potts Point, N.S.W, 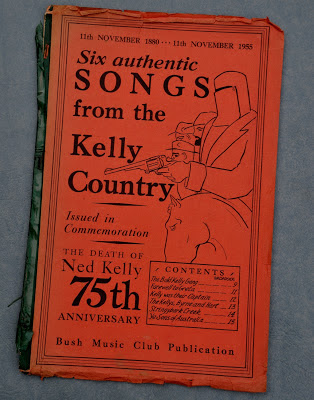 Every Friday night Sydney members of the Club gather at Video Studios, 149 Castlereagh Street, for the purpose of learning and trying out new songs and rehearsing old ones. There is usually an unusual collection of musical instruments, and informality is the key-note. In addition to the musical items there are always plenty of volunteers with recitations and yarns, Traditional bush songs are interspersed with modern topical and work songs, and we learn at least one new song a week, Visitors are always welcome. 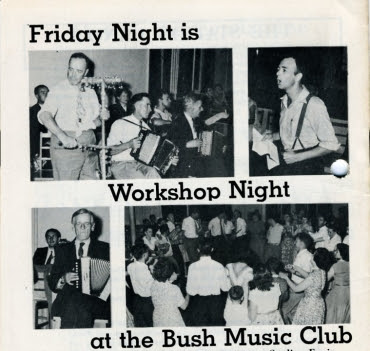 SINGABOUT - IT’S ON THE WAY!
Twenty pages of songs, old and new, complete with music - articles, features, parodies, photos, folk and square dance tunes and calls, competitions and news! It’s all yours for two bob • SINGABOUT is your club magazine, Send news, articles, songs and photos of your group or yourself, to the editor:-
John Meredith, 5 Henry Street, Lewisham, N.S.W.

£5/5/- “SINGABOUT” FINDATUNE COMPETITION £5/5/-
On page two you will find the words of a ballad by Mick Lawson, popular coalminer poet. We want to print it in the first issue of “SINGABOUT”, as a song. All you have to do is write a tune, or set it to a traditional tune. The prize? £5/5/-. Closing date November 30th.

We’ll pick and drill and shoot and fill then homewards we will go.
It’s lovely down the pit my lad, there’s nowt so much to do
Save drill a hole and shoot the coal and shovel all day through.
And if tha’s feeling tired lad, why don’t get in a rage.
Just think that in a few hours more you’ll ride up in the cage.
So give three cheers for the Coal Board and the men who own the mine.

For a miner’s life is a lovely life, the job is really fine.
He drops down in a lovely cage and when he’s in his bord
He just fills twenty ton or so and rides up like a lord.

Of course, at times, we have a ‘fall’, we don’t care much for that
For several tons of rock or coal will smash you rather flat,
But on the other hand. lad, it’s really only fair
To say we’re safe from hailstones, so we’ve got something there.

Rules.
Melody line only of one verse and chorus, plus last line of last chorus is required. The tune may be original or an arrangement of a non-copyright traditional tunes. The executive of the Bush Music Club shall be the judges and their decision will be final. The winning tune will become the property of the BUSH MUSIC CLUB. There is no entry fee. Fill in this form and enclose it in a sealed envelope, bearing your pen name,
Attach to MS which must only bear the pen name of the entrant.

Published for THE BUSH MUSIC CLUB by A. Scott, 57 Crown St., E. Sydney,