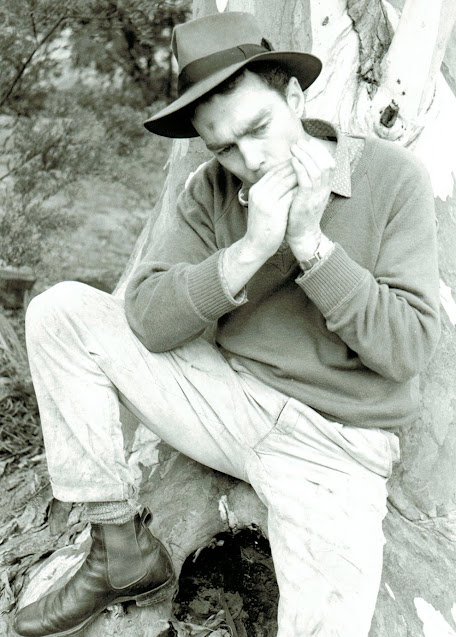 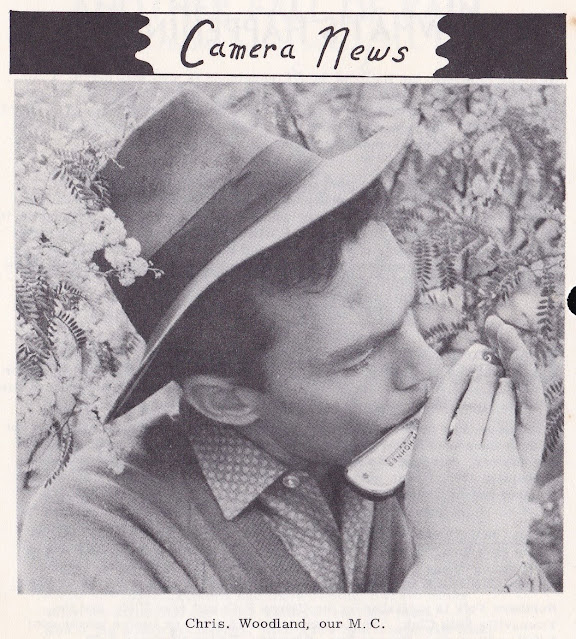 Singabout 6(2), 1967 (John Meredith photo, BMC Archives)
Chris is a folklorist and historian and has been a member of the Bush Music Club since the early 60s and was MC from 1963 to late 1967. He moved from Sydney early 1968 and has always stood up for Club ideals.
He accompanied John Meredith on many collecting trips over the years, and did a lot of collecting on his own. His Oral History interviews are held by the National Library, and artifacts owned and collected by him are in Regional museums. He has recorded the more recent songs of John Dengate, taking up where John Meredith left off. For many years he has shared his knowledge by giving talks and lectures and is a repository of club history. (Citation for Chris's Life Membership, 2014)
~~~~~~~~~~~~~~~~~~~~~~~~~~~~~
A Few Comments on John Meredith by Chris Woodland - Talks from BMC's 2012 National Folk Festival Themed Workshop on BMC's First 10 years.

As we are aware he became known, in his time, as the greatest collector of Australian folk songs and music; without him, and a few others, a whole tradition would have been lost.

He was also an author of about twenty books, was a poet and reciter, musician and singer.

He was more than a collector. He was, among many things, a knowledgeable man of many cultures, varieties of music and literature. In my collection I have six books he produced of Japanese Haikus.

He had collected all these songs relating to the shearing industry, but did not work in a shearing shed until he was 73 years of age; that was in 1993 on our way back from Cooper Creek when I took him to a station from my past in the Paroo River area of outback north-west NSW. John Meredith, Merro, was also an ornithologist, a thespian, photographer, confidant, colleague, correspondent and collaborator. He was a mentor, mate and much, much more; and we still miss him. 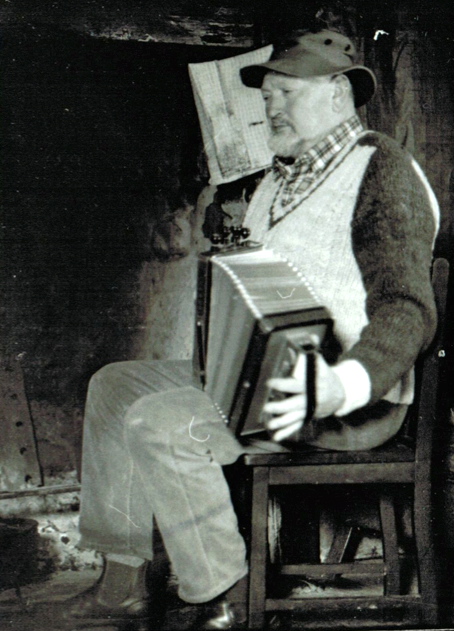 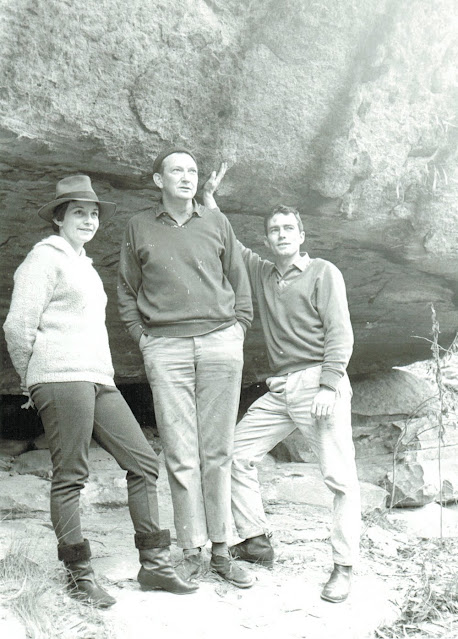 Virginia (then Brown, later Woodland), John Meredith & Chris Woodland at a Donahoe cave on the Moore's property near The Oaks, c.1965 The two sisters of Tom Inglis Moore (writer, critic and editor, 1901-1978) ) were resident at the time. (Photo by John Meredith) 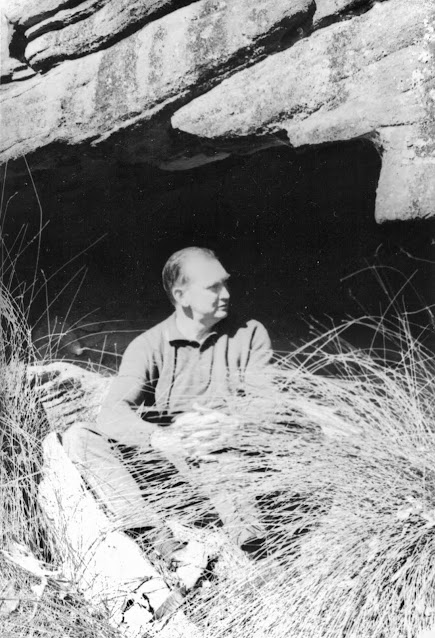 Here are three of my photographs which are associated with Merro’s (superior) snaps taken on the same occasion when we were hunting for Donahoe’s (the Wild Colonial Boy) caves in about 1965. The accompanying text reads: Merro during our search for Donahoe caves, Mt Hunter near The Oaks, south of Sydney; c.1965 & a gully in the creek where we were seeking the Donahue caves. ‘Twas very wooded, deep and bushy, tho the surrounding country was cleared for grazing (Photos by Chris Woodland) 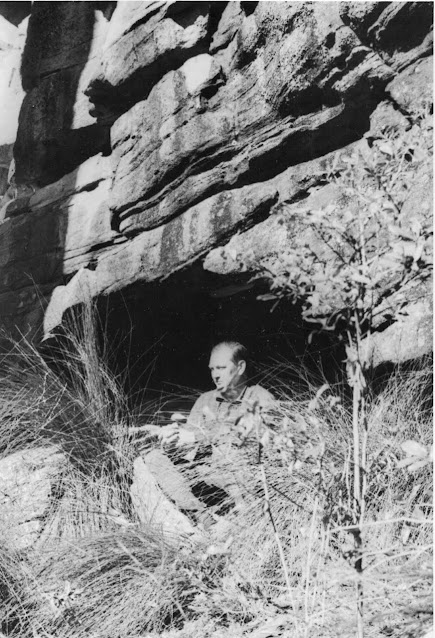 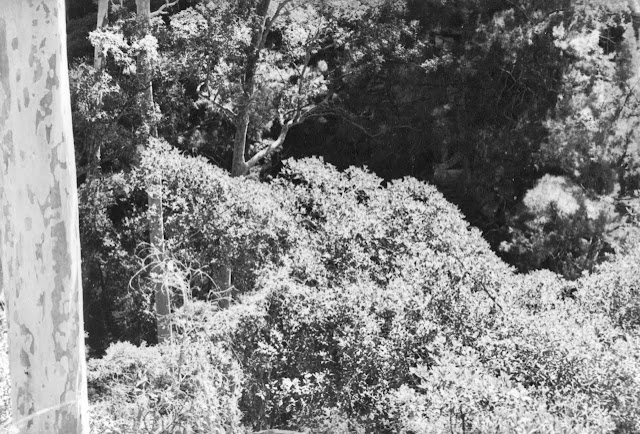 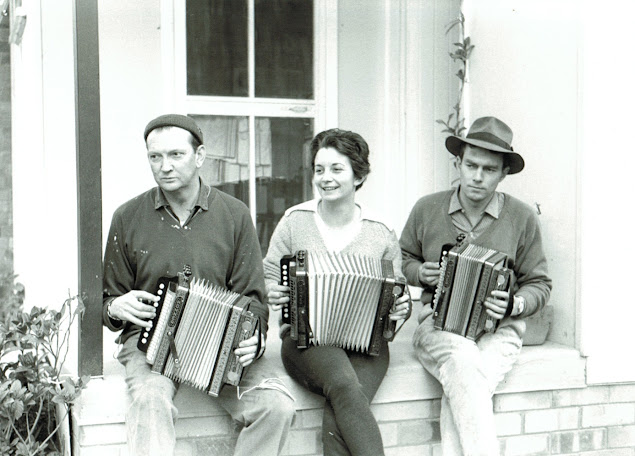 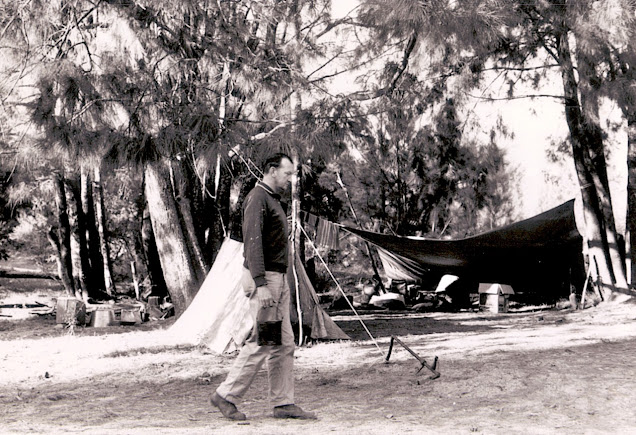 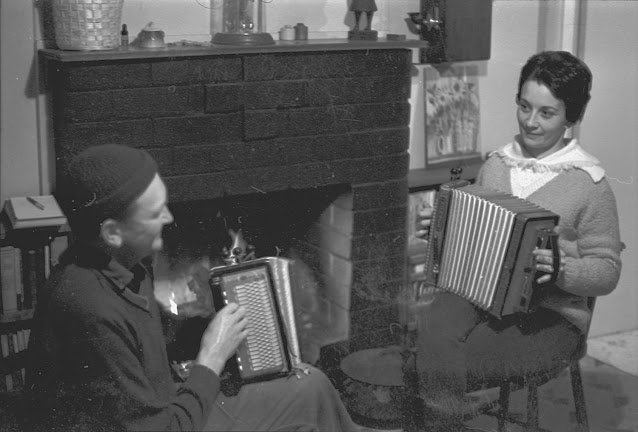 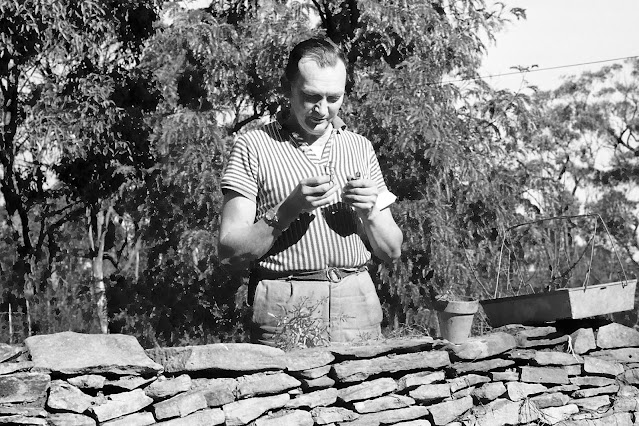 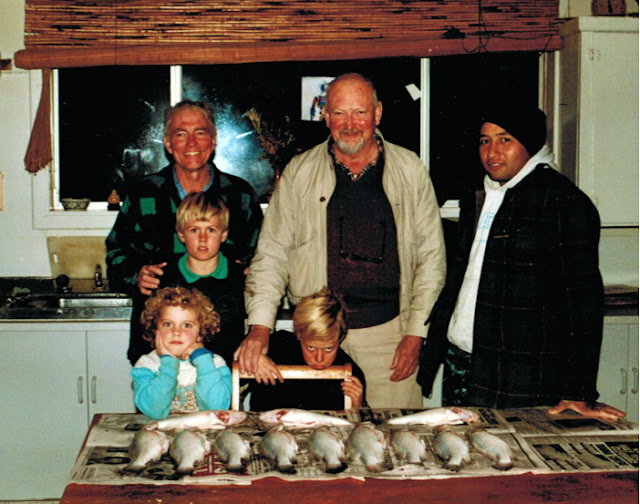 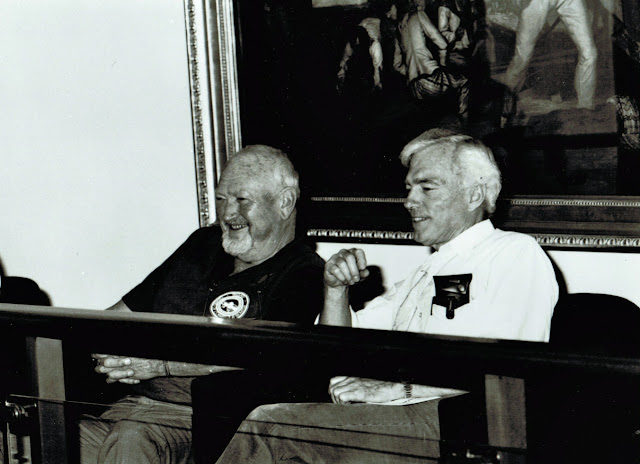 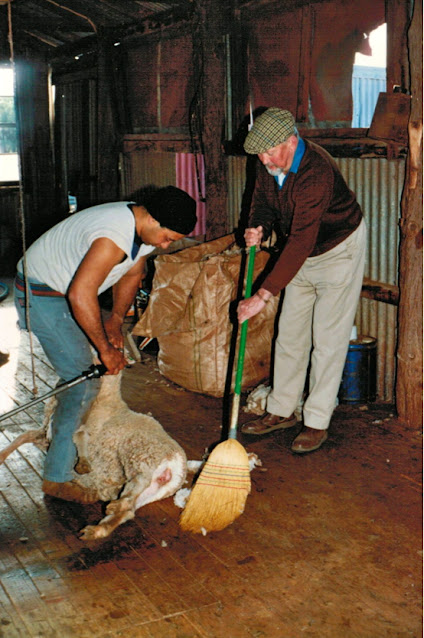 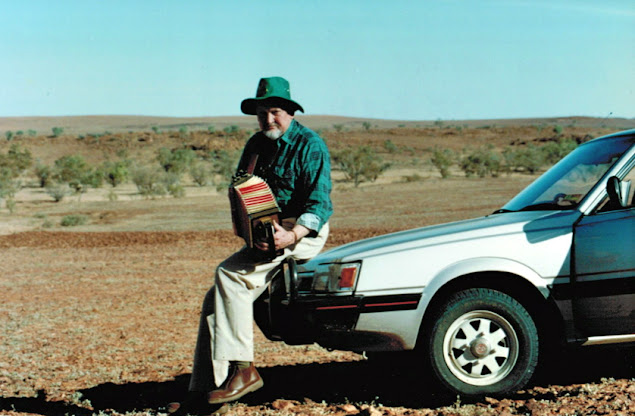 Merro practising while Chris went climbing a steep hill to look at an unmarked cairn. A wide panorama of the Cooper floodplain could be seen from that site. West of Nappa Merri, probably 19.6.’93. We were heading east towards Thargomindah. (Chris Woodland photo) 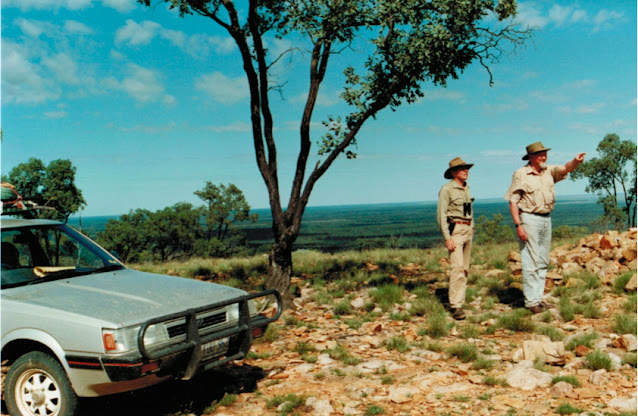 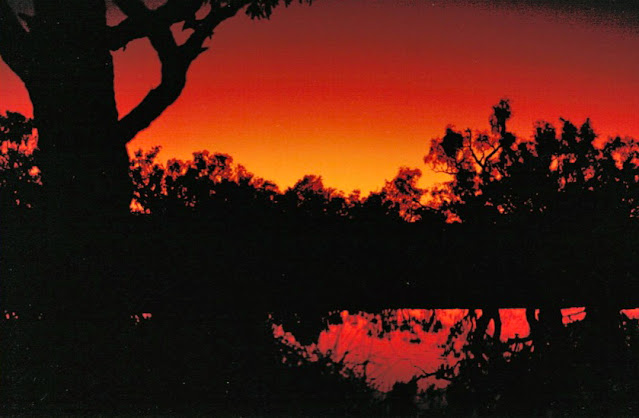 The photo was taken at our camp about 400 metres away from the Dig Tree on the Cooper. It was Henry Lawson’s 126th birthday (17 June 1993). We celebrated the Bard’s birthday on the banks of the Cooper as the sun set beautifully over the water with music, song and poetry. (Chris Woodland photo) 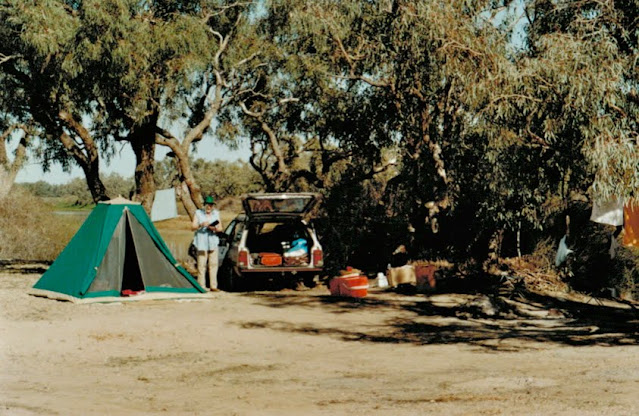 Merro & Woody’s camp at Cooper Creek about 400 yards from the Dig Tree, 18.6.’93. The Cooper is just behind Merro and the coolabah trees. Merro had lost his fly veil and the flies annoyed him greatly, so he wore coolabah leaves on twigs around his hat to deter them! The previous evening we had celebrated Lawson’s birthday on the banks of the Cooper with some music and a bottle of red. (Chris Woodland photo). 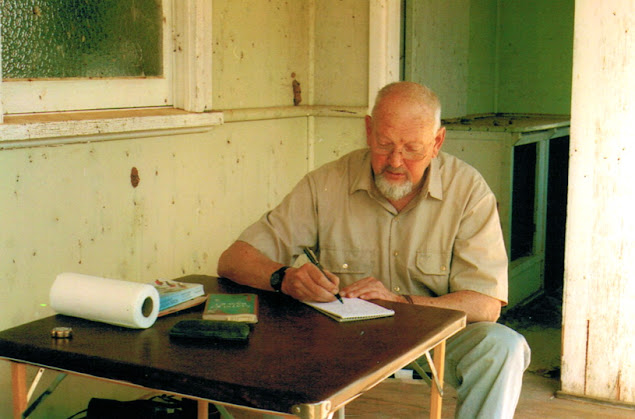 One of my favourite photos of Merro. He is updating his diary on the verandah of derelict Numbardie homestead, October 1993. Note bird identification books on the card table we used to take with us for convenience. Numbardie is now adjoined to Salt Lake Stn and is where Chris Woodland lived & worked as a ringer in 1960 and early 1961. Here we lived on ‘roo, goat, yellowbelly and rabbit.  (Chris Woodland photo) 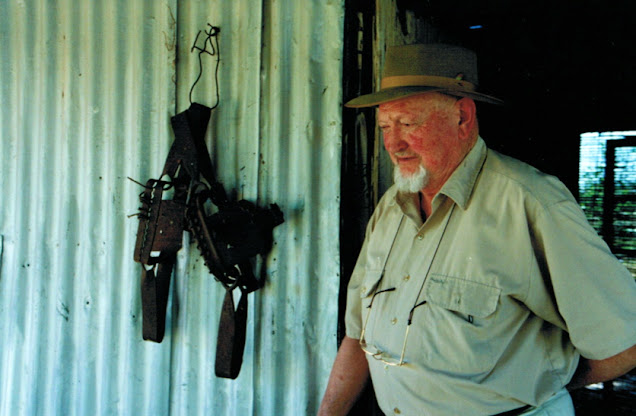 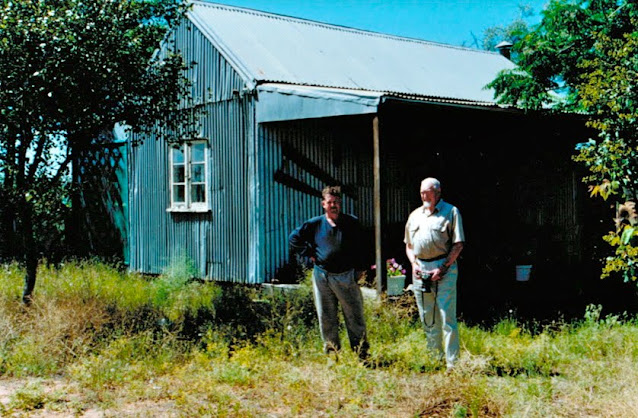 Michael Mallon of Sharoon station & Merro outside Ogilvie's hut, 15.10.1998. This was Merro’s last field trip, though he had hung up his recording microphone in 1994.(Chris Woodland photo) 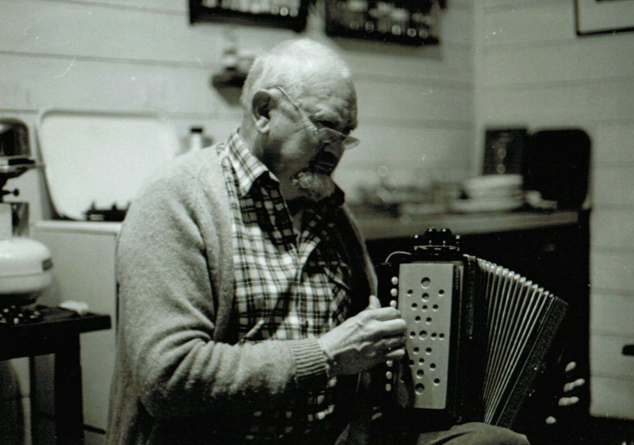 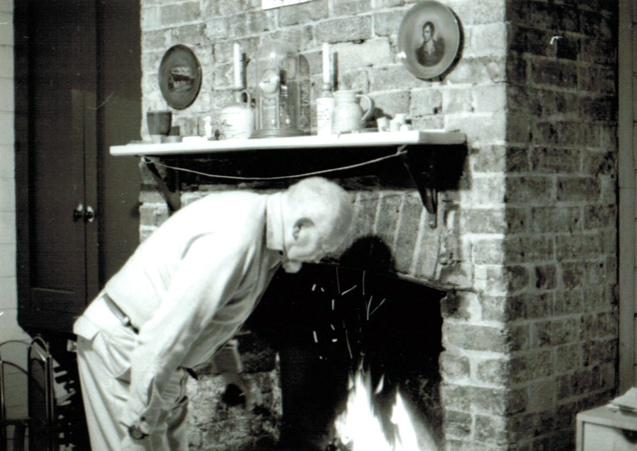 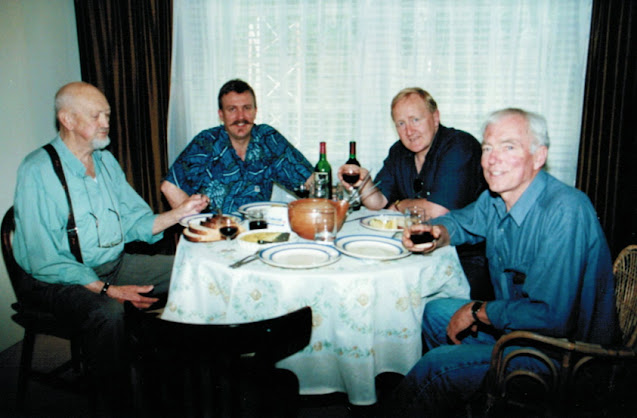 The last farewell  3-12-2000, John Meredith, Kevin Bradley, Keith McKenry, Chris Woodland (Photo - Jac Bradley, Chris Woodland collection)
The photo of Merro was taken by Jac Bradley when Kevin Bradley, his daughter Jac, Keith McKenry and I went to see him. It was 2 1/2 months before he died, which was two or three days before he turned 81. Fortuitously it was Eureka Day, the 3rd December, a day that meant so much to Merro and myself. I was so please we could get down to see him. A big thanks to the National Library! The house had been Claude’s, Merro’s brother and Merro bought it when he decided to return to the area where he was brought up. 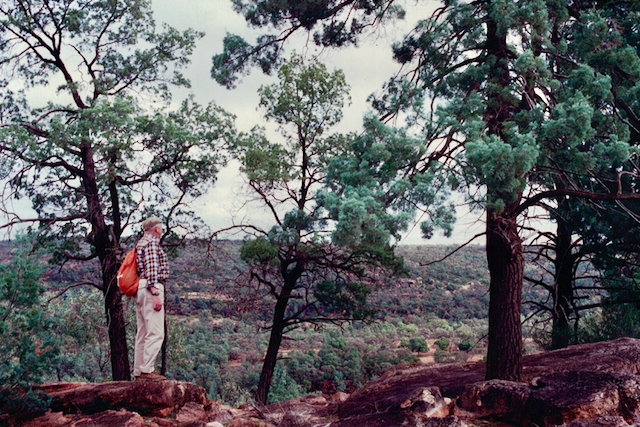