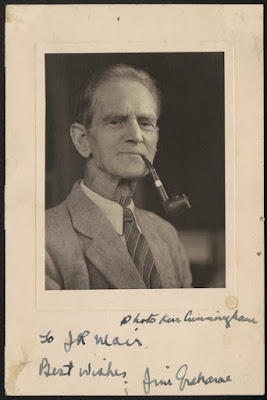 Photo by Ken Cunningham - from National library of Australia - this photo is out of copyright.


Jim Grahame (pen name for Jim Gordon (1874-1949) has written for the world at large and especially for bush folk. … He writes of simple things and simple joys, themes that enter into the everyday life of the outback Australian” - so writes J K Moir, President of the Bread and Cheese Club in the Foreword to Under Wide Skies in 1947.

Grahame’s poems (numbering about 200 in this volume) are organised under headings such as Bush Songs, People of the Bush, Bugle Calls, Tributes to Lawson and Other Tributes. When reading the selection of poems in the section Bush Songs, it doesn’t take long to realise we have a craftsman who can paint wonderful images in our minds:
We breakfast, then start on a rollicking jaunt
Through ti-tree and bracken that wallabies haunt,
By wheat fields a-waving and emerald green
Low hills in the distance, enhancing the scene.
A track leads us down to a broad billabong
Where sentinel gum trees have guarded it long.
(from Arcadia)

In The Call of the Bush, Grahame urges city folk, especially youths that are dole-faced, to venture into the bush Blazing new tracks through my forests, scaling my ruggedest peaks, carving out homes in the valleys, skirting my rivers and creeks and although he acknowledges that the bush has its challenges, he seems to remain upbeat about the healing powers of nature Bushfires here their toll have taken, but their work is partly hidden by a kurrajong that’s growing, green and glowing, at the gate (taken from Vanished Homesteads).
Grahame also writes of the many characters of the bush he met as he trekked through the outback or settled in various townships. We learn about The Bushman’s Wife (The children’s clothes are all in rags, I’m sick an’ tired of patchin’ ), Concertina Jack (He played while they danced till the sun went down and the west was arched with a golden glow) and The Old Bush Hawker (The children stand and gaze and gaze and peep beneath the fly, and whisper of the treasures there that mother “oughter” buy.)
As a travelling companion and friend of Henry Lawson, Grahame has a number of poems in Under Wide Skies dedicated to his mate. In When Lawson Walked With Me, we learn of their pleasure in each other’s company (As we passed by a little church we glimpsed within the door, where people sat with bowing heads and some knelt on the floor; but we heard not the preacher’s voice nor listened to the bell; we were content to hear the tales each other had to tell.). Mary Gilmore was also a friend of both Lawson and Grahame and in Mary Gilmore, Grahame writes The women of hut and tent and camp are in Mary Gilmore’s ken; for she knows the lives of the bushmen’s wives as our Lawson knew the men.
My only small beef with Jim Grahame’s work is that in the first poem of the book The Men that Understand, he states that
Shed-hand, jackeroo, boss and teamster –
They are the men that can understand!
Self-taught scholars and baffled dreamers,
Bronzed barge-hands of the river steamers –
They are the men I love to heed me
(Let furious critics reprimand) –
They are the men that clothe and feed me;
And I’ll sing the tune that their ears demand.
I would suggest that both women and men can enjoy Grahame’s poetry. Towards the end of his life, Grahame was awarded a Commonwealth Literary Pension with Prime Minister Ben Chifley deciding “it was due recognition of his contribution to Australian literature as a poet and balladeer over 50 years” (from the book Mates: The Friendship that Sustained Henry Lawson by Gregory Bryan, New Holland Publishers 2016 p. 402).

Jim Grahame deserves to be more widely read and Under Wide Skies is a great place to start.
Copies of the book can be purchased by contacting Phillipa Hollenkamp, 0409 564 100, cost $30 + postage & packing $12.50

Video - Jim Grahame was a a contemporary of Henry Lawson and a fellow poet. His granddaughter and great great grandson tell how his poetry has affected them and the things they have learned from him.