If you want to go "all Australian", see the New Theatre's show, Reedy River. Whether or not you have ever been an admirer of old bush-ballads before, you will be converted into a collector of them and they will come high up in your list of national folk songs. Reedy River contains a selection of the warmest, most rollicking ballads I have ever heard. 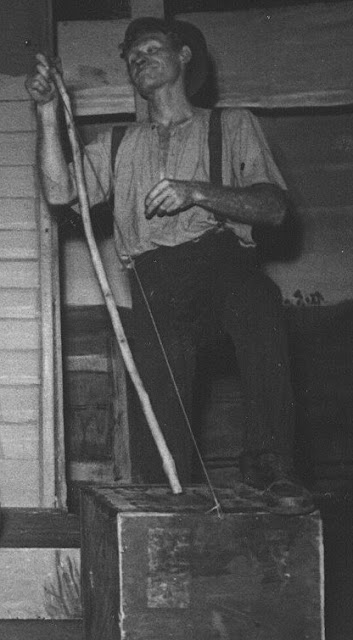 The story which forms the structure of Dick Diamond's musical comedy is not particularly strong in itself. It centres on a group of shearers in the 1890's, struggling to win their cause against the employers, despite the recent defeat of their Union by large companies. Mixed up with the conflict of Unionist versus blackleg is a somewhat vague broken marriage, which is mended when June Cairnes as Mary Collins (the wife), realises that Milton Moore as Tom Collins (the man who looks like blackleg but is not) has actually talked all the other blacklegs with whom he is working into joining the Union, thus forcing their employer to pay Union rates, and employ his mates who have been stout Unionists all the time. 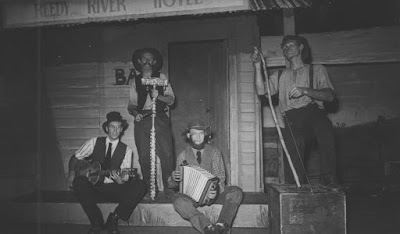 The padding is wonderful. With excellent dialogue and production, the shearers and town-folk become a group of delightful individuals. "Irish", the typically tender, bull-headed type, is outstandingly portrayed by Kenyon McCarron. His handling of the argument scene is magnificent. Edmund Allison (as Thomo) and Milton Moore (Tom Collins) play such typical roles that one cannot imagine them any other way. All supporting roles are excellent, and in particular, Lyle O'Hara takes the character-role of the school-mistress with perfection. Her recitation of The Brook is a highlight of the performance. The other highlights are musical spots. Cecil Grivas (the swaggie) sings one especially haunting ballad--My Old Black. Billy, and the chorus numbers Lazy Harry's, Widgeegoweera Joe and Click go the Shears bring the house down. Milton Moore's voice is pleasing and every word of the shearing songs, sung by quite a large group, is distinct. The traditional musical accompaniment is extremely effective in these spots. 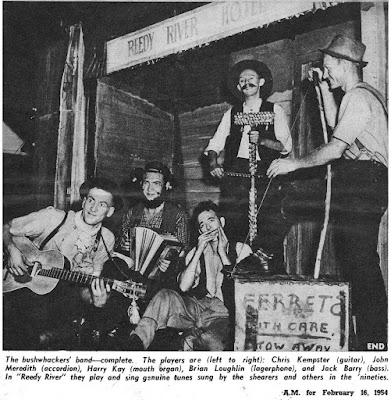 There is only one weakness. The mine sequence with the "Bush Picnic Ballet" is out of tone and fails in effect. The good-natured quipping (delivered with just the right amount of bushies' drawl), and the merry clowning in some of the ballads, provide the real substance of the presentation, thoroughly enjoyed by cast as well as audience. Sets of the pub, outside the shearing-shed, and in the schoolhouse are very well executed. Reedy River is showing on Friday, Saturday and Sunday nights.
--M.N. 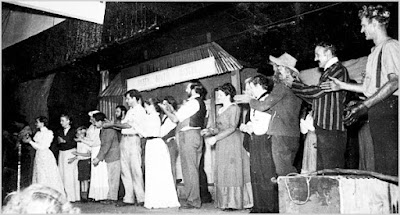 Photographs and, costume, poster and stage designs, mainly for New Theatre, Sydney, 1948-1988 / collected by David Milliss, including a volume for Reedy River is held by the State Library of NSW

These designs were for the first Sydney production of Reedy River, a musical play written by Dick Diamond (1906–1984), set in the outback during the aftermath of the great shearers’ strike of 1891. David Milliss used photographs in the Mitchell Library to source authentic images of nineteenth-century working-class dress on which to base his designs.
Reedy River was first performed by the New Theatre, Melbourne, on 11 March 1953. The Sydney production opened on 5 December. 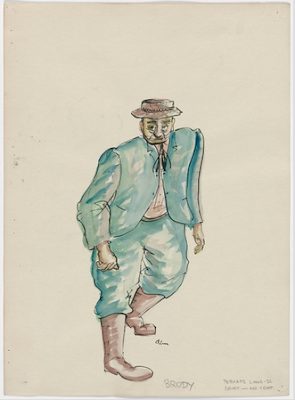 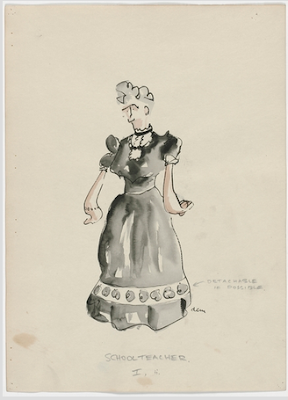 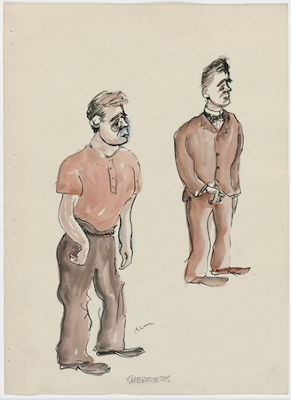 Three images from the collections of the State Library of New South Wales.

Program courtesy of Silvia & Tom Salisbury who appeared in this production - Silvia (Shepherd) in the chorus & Tom in Stage Management & Set Construction. 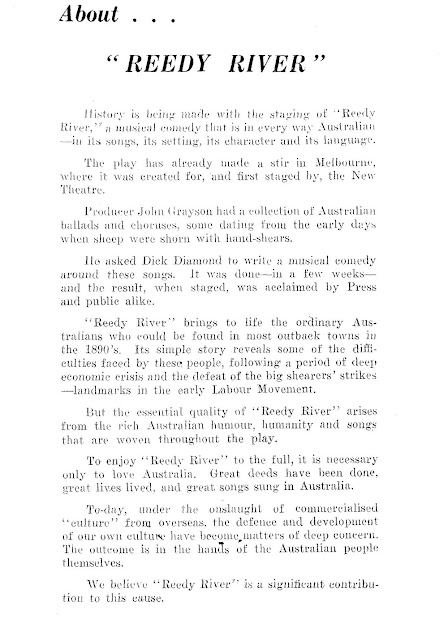 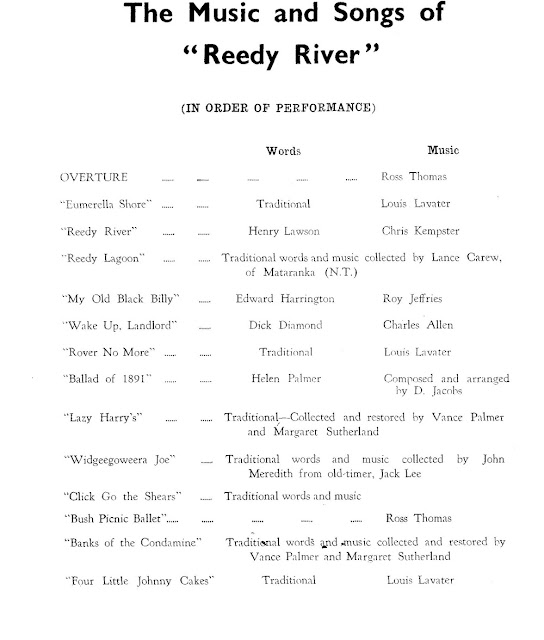 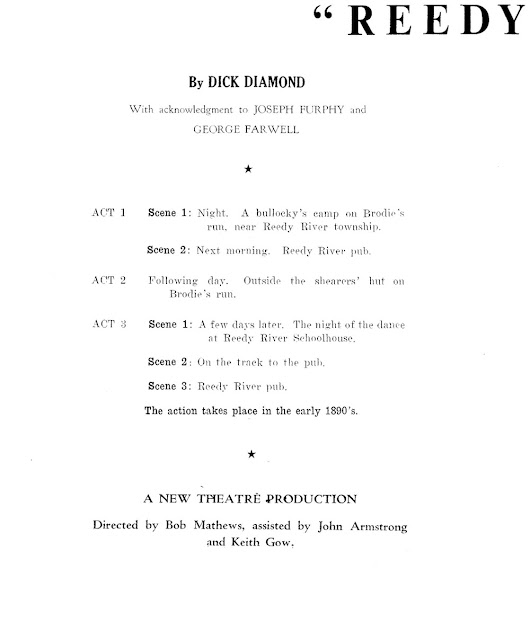 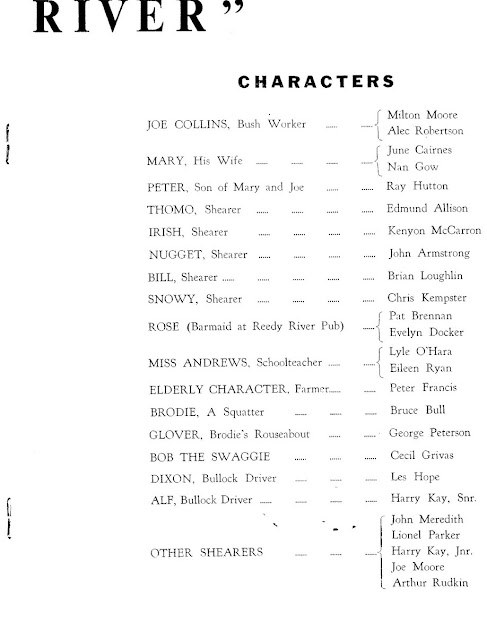 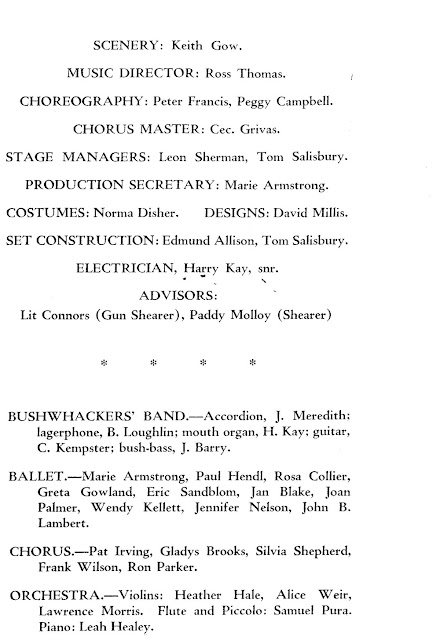