How to build a lagerphone by Brian Loughlin 1956 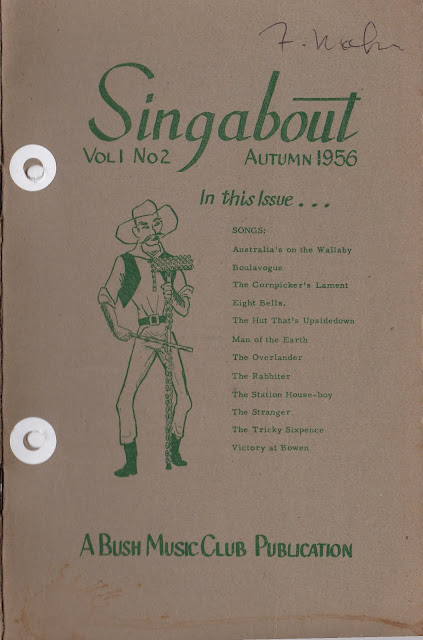 
Build a lagerphone ... by Brian Loughlin 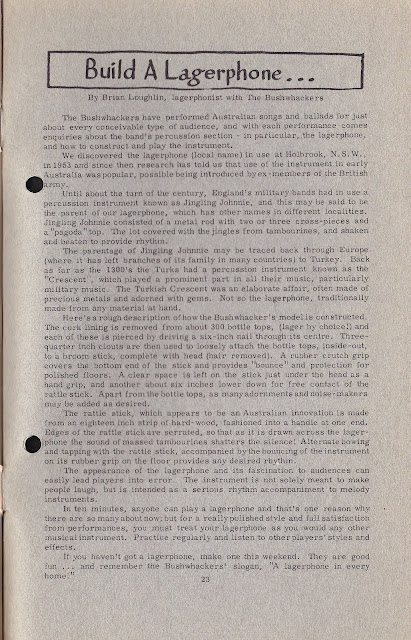 typescript of article -
The Bushwhackers have performed Australian songs and ballads for just about every conceivable type of audience, and with each performance comes enquiries about the band's percussion section - in particular, the lagerphone, and how to construct and play the instrument. 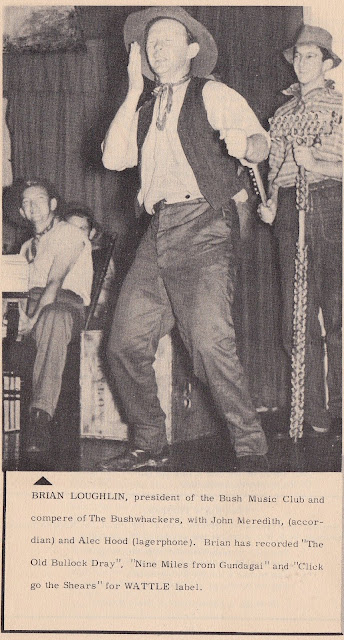 We discovered the lagerphone (local name) in use in Holbrook, N.S.W., in 1953 and since then research has told us that use of the instrument in early Australia was popular, possibly being introduced by ex-members of the British Army.

Until about the turn of the century, England's military bands had in use a percussion instrument known as Jingling Johnnie, and this may be said to be the parent of our lagerphone, which has other names in different localities. Jingling Johnnie consisted of a metal rod with two or three cross-pieces and a "pagoda" top. The lot covered with the jingles from tambourines, and shaken and beaten to provide rhythm.

The parentage of Jingling Johnnie may be traced back through Europe (where it has left branches of its family in many countries) to Turkey. Back as far as the 1300's the Turks had a percussion instrument known as the "Crescent", which played a prominent part in all their music, particularly military music. The Turkish Crescent was an elaborate affair, often made of precious metals and adorned with gems. Not so the lagerphone, traditionally made from any materials at hand.

Here's a rough description of how the Bushwhacker's model is constructed. The cork lining is removed from about 300 bottle tops, (lager by choice!) and each of these is pierced by driving a six-inch nail through it's centre. Three-quarter inch clouts are then used to loosely attach the bottle tops, inside out, to a broom stick, complete with head (hair removed). A rubber crutch grip covers the bottom end of the stick and provides "bounce" and protection for polished floors. A clear space is left on the stick just under the head as a hand grip, and another about six inches lower down for the free contact of the rattle stick. Apart from the bottle tops, as many adornments and noise-makers may be added as desired.

The rattle stick, which appears to be an Australian innovation is made from an eighteen inch strip of hard-wood, fashioned into a handle at one end. Edges of the rattle stick are serrated, so that as it is drawn across the lagerphone th sound of massed tambourines shatters the silence! Alternate bowing and tapping with the rattle stick, accompanied by the bouncing of the instrument on its rubber grip on the floor provides any desired rhythm.

The appearance of the lagerphone and it's fascination to audiences can easily lead players into error. The instrument is not solely meant to make people laugh, but is intended as a serious rhythm accompaniment to melody instruments.

In ten minutes, anyone can play a lagerphone and that's one reason why there are so many about now; but for a really polished style and full satisfaction from performances, you must treat your lagerphone as you would any other musical instrument. Practice regularly and listen to other players' styles and effects.

If you haven't got a lagerphone, make one this weekend. They are good fun ... and remember the Bushwhackers' slogan "A lagerphone in every home."