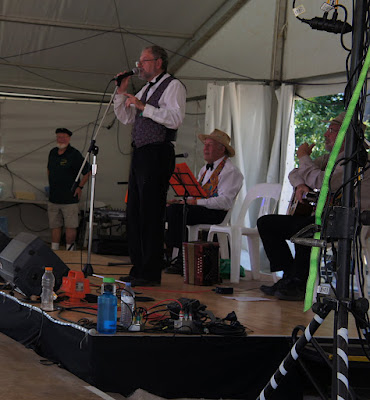 In this age of digital disruption, there have evolved pop up events, retail stores, and even restaurants appear suddenly and may last only a matter of weeks or months. Even the performance of Shakespeare plays has occurred in pop up theatres in both Melbourne and Sydney. Flash mobs have appeared for many one-off events. Contrast this with many dance groups which have lasted many years. One of the authors was involved in one dance group for over 30 years.

Most of the dance groups which apply to perform at the National Folk Festival have been around for a number of years. The idea of a pop-up dance group belonged to Antonella Salpietro and Daryl Powell, who in 2017 thought it would be a good idea to apply to perform at the NFF in 2018. Both Daryl and Antonella had been part of another pop-up dance group, The Itinerant Dancers which performed at the NFF in 2015. See Itinerant Dancers Display at the 2015 NFF

For the 2018 application, it was decided to select eight dancers from the ACT and eight from NSW, instead of just twelve as in The Itinerant Dancers. The musicians hailed from the ACT. The dancers had many years’ experience and had honed their skills at events run by the  Bush Music Club, the Central Coast Bush Dance and Music Association, the Blue Mountains Heritage Dance Group and the Monaro Folk Society. Daryl and Antonella decided that the theme of the display would be the Bass Strait Ball, as the featured states for the 2018 NFF were Victoria and Tasmania. Daryl chose a series of colonial dances from these two states with a focus on the dances of around 1880 and the appropriate music to accompany them.

Daryl saw the display as representing different layers of colonial Australia, including the convict era, pastoral expansion, gold rushes and the growing cities. This allowed the inclusion of dances from high society in Melbourne, rural areas of Victoria, the goldfields and the backblocks of Tasmania. It also allowed dancers and musicians to have costumes that ranged from formal evening dress to country yokel. In harmony with the theme, Colin wore a market gardener or gold digger Chinaman’s outfit. 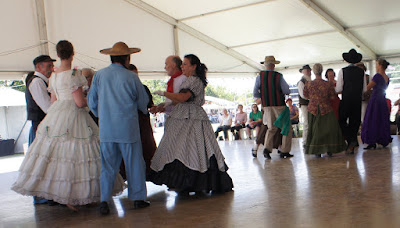 Next was the hard work of rehearsals for the geographically diverse group of dancers. The weekend of 13-14 January 2018 was selected as our first group rehearsal. Most dancers participated in this practice that was held in Daryl and Diana’s home, both in their lounge room and spacious backyard. The practice was preceded by a pot luck lunch where the dancers got to know each other. We ran through the dances, some with our allocated partners. Many of the dances were unfamiliar to us so we needed to concentrate on the patterns and flowing movements. After our first rehearsal many of us adjourned to the Pho Phu Quoc Vietnamese Restaurant in Dickson. The next day we rehearsed again at Daryl and Diana’s place and witnessed again Daryl’s calm and methodical way of teaching. 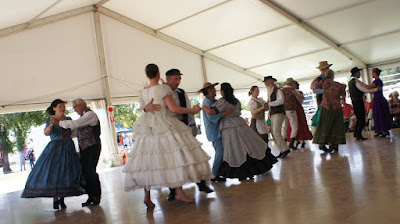 After our weekend of rehearsing, the ACT and NSW dancers had separate rehearsals practices in Canberra and Sydney. The Canberra dancers rehearsed on a stage at the local fruit market whilst the NSW dancers practiced under Bill Propert’s direction in the Bush Music Club’s Hut 44 in Marrickville.

On the 11 March 2018, both ACT and NSW dancers rehearsed at Bundanoon. The event was videoed by Paul Carr and emailed to the dancers. This gave an overview of what was required of us for our performance. Errors in our footwork etc could be viewed and remedied.

Prior to our first performance at the NFF, we held another rehearsal. Perhaps it was a case of performance nerves as this did not go as smoothly as expected. However, during the performance this went very well and exceeded our expectations. Unfortunately, one of the female dancers fractured a bone in her foot and required hospital attention resulting in her wearing a therapeutic boot so was unable to participate in the display after Saturday. Antonella consulted Bill Propert who made an executive decision and approached Colin’s spouse, Karen who without hesitation stepped in and performed in the next two performances.

Prior to travelling to Canberra, Karen had noticed Colin viewing the Bundanoon rehearsal videos and asked if these could be emailed to her so she could have them on her phone. This was a beautiful coincidence as Karen could view the dances prior to joining us in our performances. 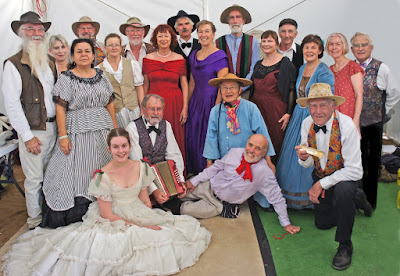 The costumes varied with some dancers wearing daywear and others wearing evening wear. For variety, Colin wore a market gardener or gold digger Chinaman’s outfit. One minor hazard was on the last performance as the floor was slippery because the night before the tango dancers wanted a floor which suited them but was a bit hazardous for us. This made us a bit hesitant when performing that last dance display.

Overall, we found that the camaraderie amongst the dancers was tremendous. Some of the dancers lent clothes to other members of the group. Feedback was positive from many in the audience. Norm Ellis announced at the Sunday night Colonial Ball that our performance was well worth viewing and quite a few attended. Some of the Melbourne dancers thought aspects of our performance program could be was worth incorporating in some of their balls.

It was a great pleasure to return to the spacious and centrally located Piazza; a laudable decision by the NFF Management.

Given the positive feedback at the 2018 NFF, the pop up dance group may decide to explore other challenging territories. 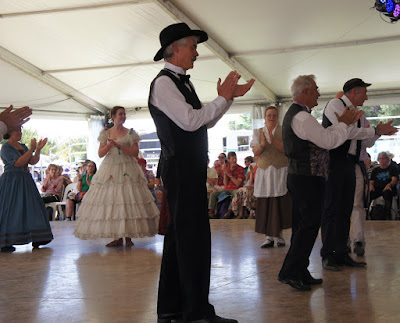 It was a rewarding experience for all, that drew on a keen sense of collaboration between dancers and musicians who were located cities apart and ably brought together by Daryl.

Report on the Bass Strait ball, at the 2018 National Folk Festival