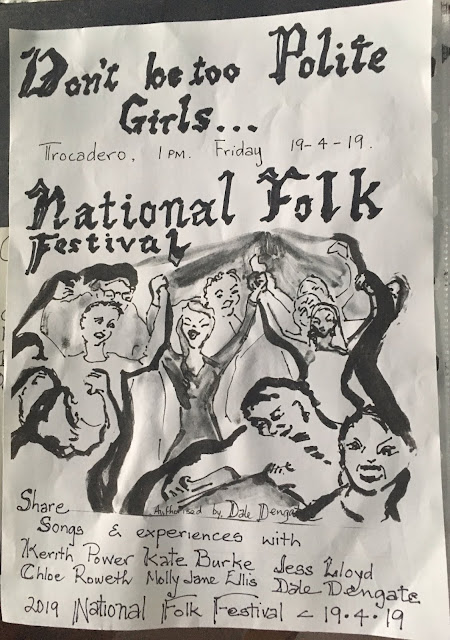 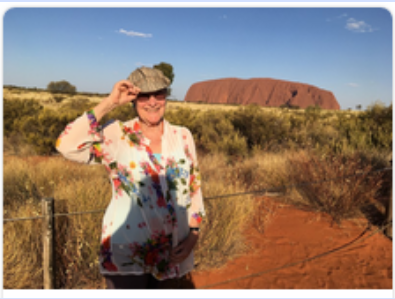 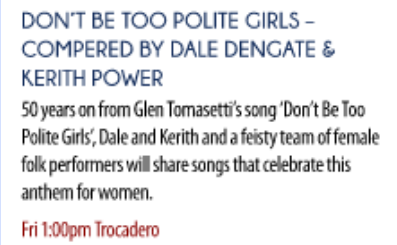 Is it a parody or a song using a traditional tune?

Many readers will know the shearer’s song Flash Jack from Gundagai, which can be found in a small book of Songs of the Shearer which I put together from BMC Singabout songsters, to be sold at the Royal Easter Show when the Concert Party sang at a shearing demonstration using a steam driven machine. The introduction sounds jingoistic, but was directed against too much influence from USA in our culture, in that period of late 1960-70s.

Originally published in Singabout Vol 5, No 4, p10 it was noted that although we were uncertain who was ‘Flash Jack’  the identity of hungry Patterson or ‘ Old Tom Patterson’ as Banjo Paterson knew him was T.F.Patterson who took up ‘Ulonga Station’ in 1871. He eventually owned 300,000 acres with a long frontage to the Lachlan River near Booligal. To the south, over in the One Tree Plain, it stretched half way to the Murrumbidgee River. The reference to the Wolseley shearing machine, first introduced in 1888 and 1893 , when the Bank of Australasia became the owners of Ulonga places the song around this time.

The well known chorus goes: All among the wool, boys, keep your blades full boys, I can do a respectable tally myself whenever I like to try, But they know me round the backblocks as Flash Jack from Gundagai. The verses are written in the first person and tell of all the places where the shearer has shorn. It is a work song describing the experiences of a shearer.
Don't be too polite, girls sung by combined Unions Choir of Queensland 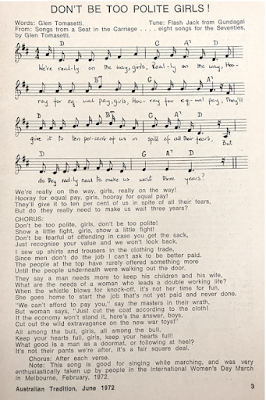 Glen Tomasetti used the traditional tune of Flash Jack when she wrote the song to commemorate the High Court decision to hand down equal pay in 1969. I think it is a clever parody using a tune identified with men’s work and paralleling women’s work experiences.Glen was a fine singer songwriter, an assured and authoritative performer with considerable understanding of the cultural and historical aspects of Folk Music. She always spoke her mind. She held the opinion that, as Australians we had a responsibility to sound like Australians and would take people to task on this point.  She wrote the words Don’t Be Too Polite, Girls as a song about women’s pay and work conditions. It became the equal pay anthem many women sang with the conviction that comes from the shared experience.

She was also a writer with passion and a strong understanding of women’s struggles throughout Australian history. During the 1960s-70s Glen sang in various folk music venues in Melbourne and taught guitar accompaniment classes in a room above Traynors coffee lounge. Glen was a rebel against her background and the times. At this time Glen organised recording sessions, radio programs & theme concerts. She made the front page a a daily paper for withholding 6% of her tax as equivalent to the amount being spent on the war by Harold Holt ’s government.

With the American war in Vietnam came the organisation SAVE OUR SONS in which Glen played a major role. She helped organise the biggest folk concert of all at that time, a Peace Concert at the Myer Music Bowl. Singers came from Sydney and eventually the idea for festivals and touring groups began

Glen was in the forefront of the Folk revival in Australia. She was a great humanist and a great encourager. Apart from her abilities as a singer, collector and historian she was a strong anti-war activist and a life long supporter of the women's movement.

Don’t be Too Polite, Girls it is still sung with gusto when women gather to sing protest songs as the message is still relevant. 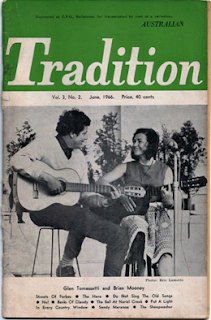