The Music of Strange Bands, by Graham Seal

The Music of Strange Bands

In 1945 the Adelaide Advertiser published an article titled ‘The Music of Strange Bands’. It was a knowledgeable account of ‘bush’ bands using mainly home made and instruments like gum leaves, spoons, cigar box fiddles, kerosene tin drums and banjos made from old tennis racquets. These ‘found’ and hand made instruments were often played in combination with ‘proper’ commercially produced instruments, mainly the button accordion, harmonica, tin whistle, concertina (usually Anglo-German) and triangle, among others. One of the bands mentioned was the Wallaga Lake Band, a famous Aboriginal ensemble around the eastern states [i] as well as at least one another South coast group and players in Victoria’s Gippsland region.

‘…It had two concertinas, two accordians [sic], a cigarcione (a bush violin made from a cigar box, wallaby sinews and bits of timber), a tin whistle, a bush-made flute, a drum, gumleaves and several mouth organs.  All instruments, except the accordians, concertinas and mouth organs, were home-made. The drum was a section of a hollow log with wallaby skins stretched over the ends.’

The point of this article was to draw attention to the invisibility of these ensembles and to advocate the formation of an Australian ‘bush band’ using these instruments: ‘If these novel bush instruments were gathered together to form an Australian bush band I believe that we would see and hear something outstanding.’


The article did not discuss the repertoires of these groups, but emphasised their Aboriginality [ii] and implicitly theorised a unique Australian sound.

Such instruments, of course, were also played by other than Aboriginal musicians and were once fairly common in rural Australia in the era when people had to make do for most things, including their entertainment. But apart from the odd recording [iii] we now have hardly any record of the sound that these – or any other ensembles of the pre-recorded past – actually made. They have become ‘ghost music.’ The ignoring of this powerful and authentically Australian musical tradition, as Eureka complained, [iv] meant that we have little idea today of what this music might have sounded like. 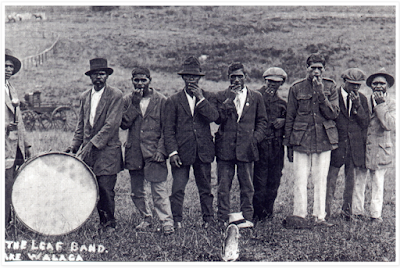 
[i]   They had the distinction of playing at the opening of the Sydney Harbour Bridge in 1932 and had been in existence from at least the early 1920s.


[ii]   In the condescending racism of the period.


[iv]  The article accurately observed that ‘Had these bands been in America they would have been featured in films and on the radio. ‘