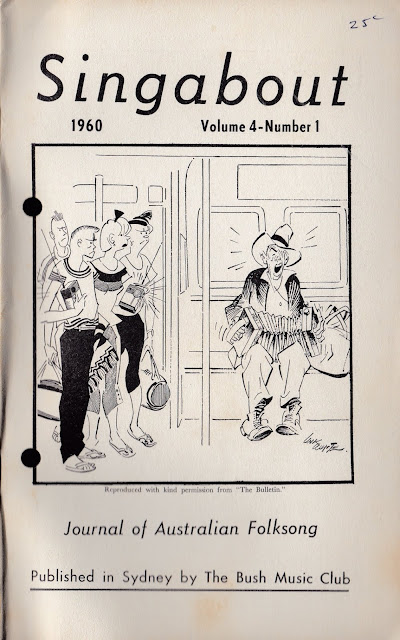 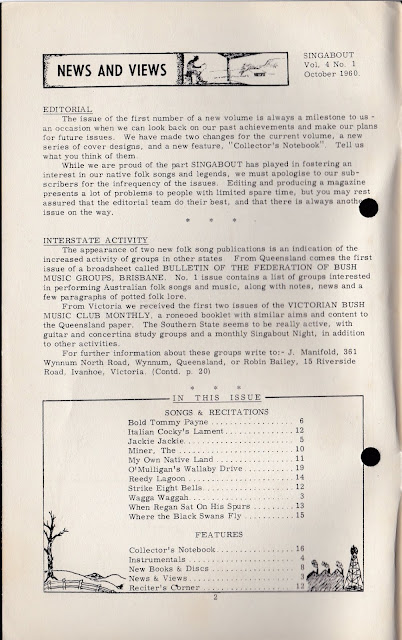 2.  Singabout, Volume 4(1),  October 1960 - NEWS AND VIEWS - Editorial ... a new series of cover designs, and a new feature "Collectors Notebook". INTERSTATE ACTIVITY ... two new folk song publications ... a broadsheet called BULLETIN OF THE FEDERATION OF BUSH MUSIC GROUPS, BRISBANE containing a list of groups  interested in performing Australian songs and music, along with notes, news and a few paragraphs of potted folk lore. From Victoria ... VICTORIAN BUSH MUSIC CLUB MONTHLY, a roneoed booklet ... with guitar and concertina study groups, and a monthly Singabout night, in addition to other activities.  (cont'd p.20)  IN THIS ISSUE - Songs & recitations, & Features 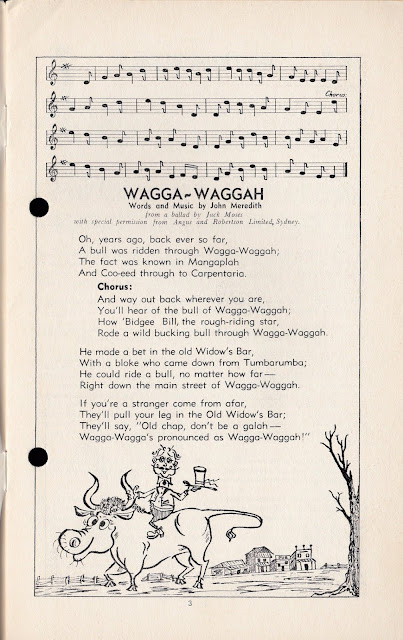 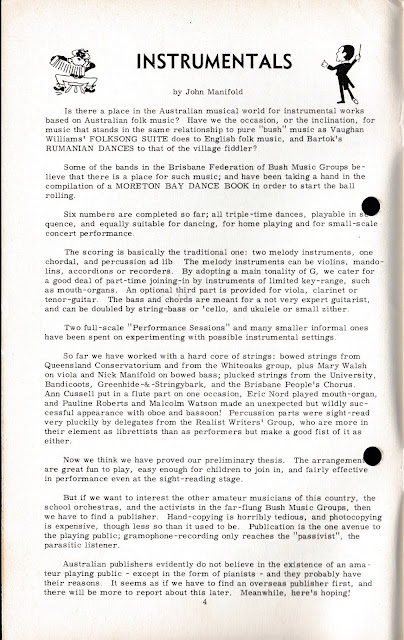 4.  Singabout, Volume 4(1),  October 1960 - INSTRUMENTS by John Manifold. Is there a place in the Australian musical world for instrumental works based on Australian folk music? ... Some of the bands in the Brisbane Federation of Bush Music Groups believe there is a place for such music  and have been taking a hand in the compilation of a MORTON BAY DANCE BOOK 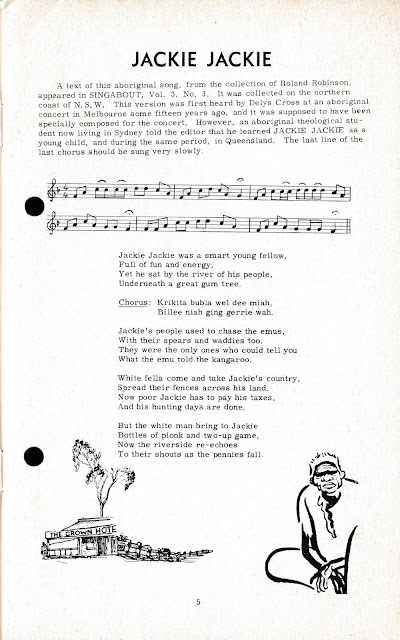 5.  Singabout, Volume 4(1),  October 1960 - JACKIE JACKIE - see Singabout 3(3), p.8 & p.9 for an article about this song  ... This version was first heard by Delys Cross at an aboriginal concert in Melbourne some 15 years ago, and it was supposed to be specially composed for the concert. However  an aboriginal theological student now living in Sydney told the editor he learned JACKIE KACKIE as a young child, and during the same period, in Queensland. The last line of the last chorus should be sung very slowly. 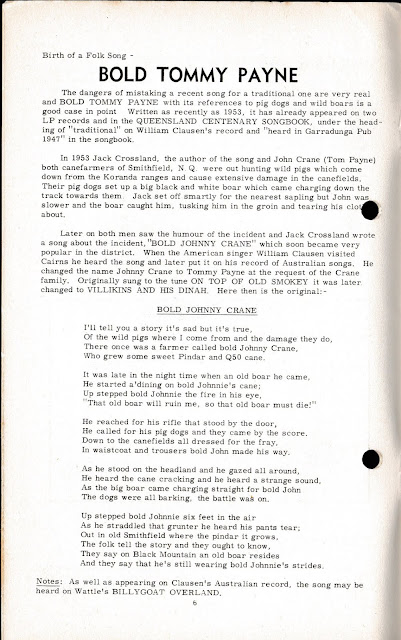 6.  Singabout, Volume 4(1),  October 1960 - Birth of a Folk Song - BOLD TOMMY PAYNE. The dangers of mistaking a recent song for a traditional one are very real ... Written as recently as 1953 it has already appeared in two LP records and in the QUEENSLAND CENTENARY SONGBOOK under the heading of "traditional" ... Jack Crossland is the author ... 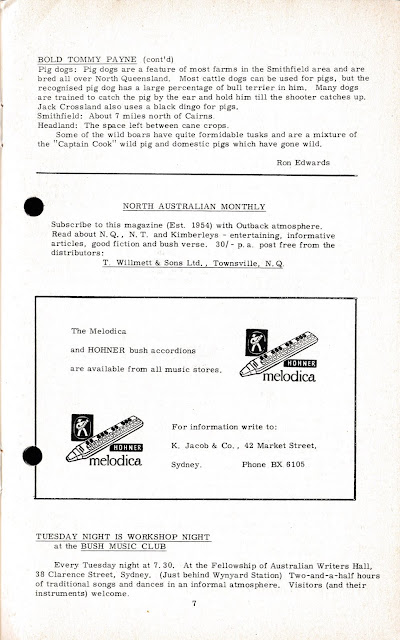 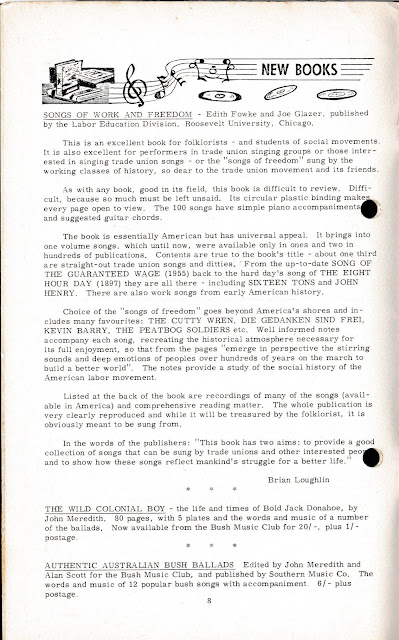 8.  Singabout, Volume 4(1),  October 1960 - NEW BOOKS. SONGS OF WORK AND FREEDOM, Edith Fowke and Joe Glazer, Labor Education Division, Roosevelt University, Chicago. This is an excellent book for folklorists ...  trade union singing groups ... The book is essentially American ... In the words of the publisher "this book has two aims: to provide a good collection of songs that can be sung by trade unions and other interested people and to show how these songs reflect mankind's struggle fro a better life". Brian Loughlin.  THE WILD COLONIAL BOY - the life and times of Jack Donohoe, by John Meredith.  80 pages with 5 plates and the words and music of a number  of the ballads. Now available from the Bush Music Club for 20/-, plus 1/- postage.  AUTHENTIC BUSH BALLADS, edited by John Meredith and Alan Scott for the Bush Music Club. The words and music of 12 popular bush songs with accompaniment. 6/- plus postage. 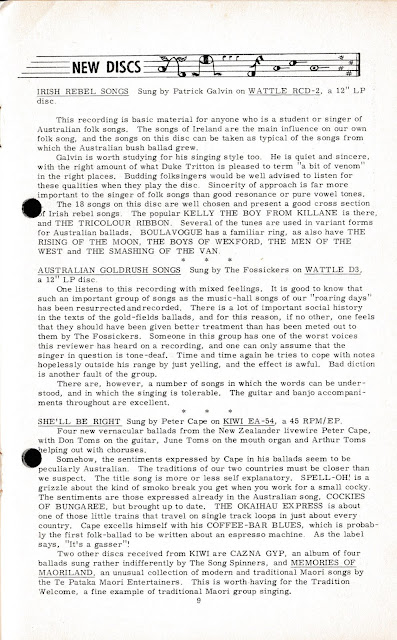 9.  Singabout, Volume 4(1),  October 1960 - NEW DISCS. IRISH REBEL SONGS sung by Patrick Galvin on WATTLE RCD-2. This recording is basic material for anyone who is a student or singer of Australian folk songs. The songs of Ireland are the main influence on our own folk song, and the songs on this disc can be taken as typical of the songs from which the Australian bush ballad grew.  AUSTRALIAN GOLDRUSH SONGS sung by The Fossickers on Wattle D3. One listens to this disc with mixed feelings ... Someone on this disc has one of the worse voices this reviewer has heard ...  SHE'LL BE RIGHT sung by Peter Cape on KIWI EA054. Four new vernacular ballads from the New Zealander livewire Peter Cape ... two other discs from KIWI  ... MEMORIES OF MAORILAND, an unusual collection of modern and traditional Maori songs by the Te Pataka Maori Entertainers. This is worth having for the Tradition Welcome, a fine example of traditional Maori group singing. 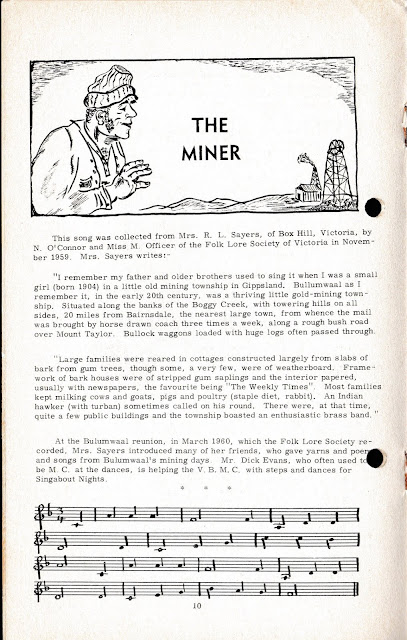 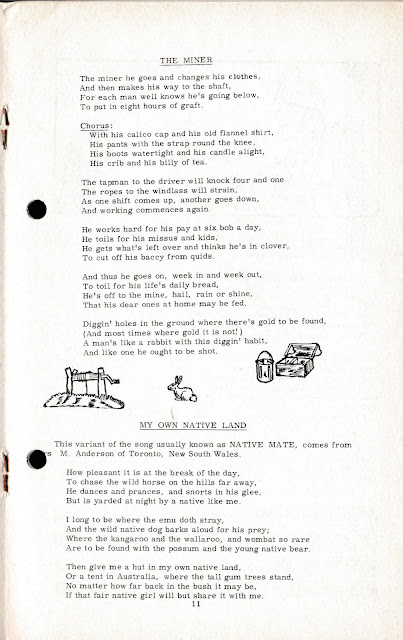 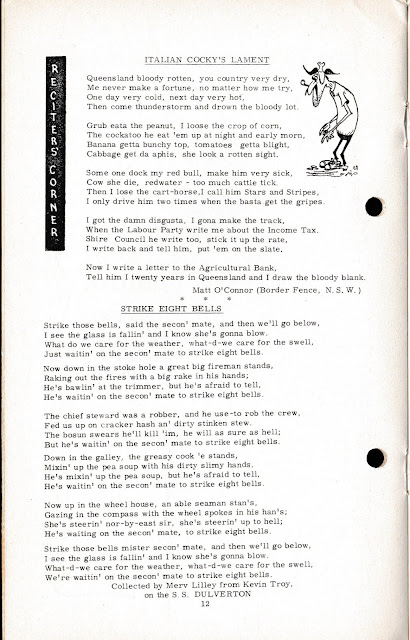 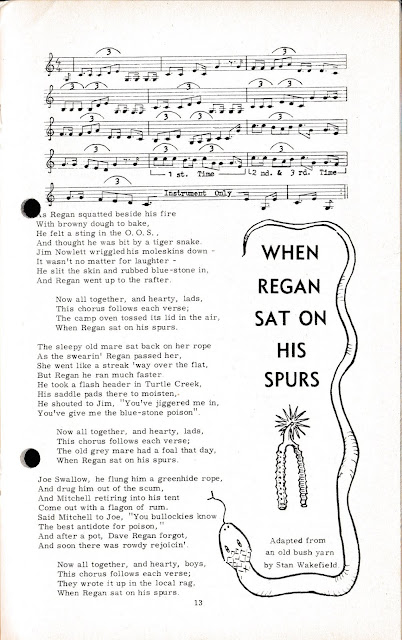 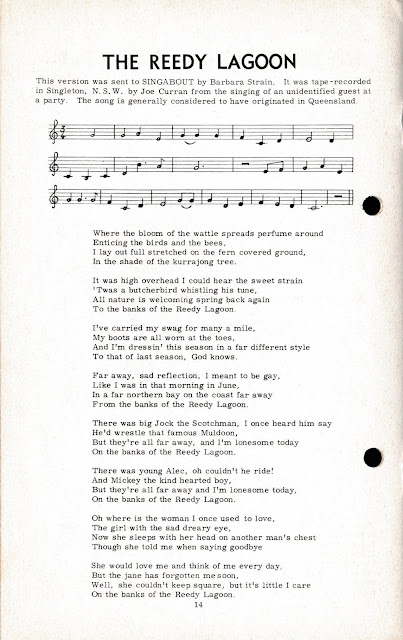 14.  Singabout, Volume 4(1),  October 1960 - THE REEDY LAGOON. This version was sent to Singabout by Barbara Strain. It was tape recorded in Singleton NSW by Joe Curren from the singing of an unidentified guest at a party. The song is generally considered to have originated in Queensland. 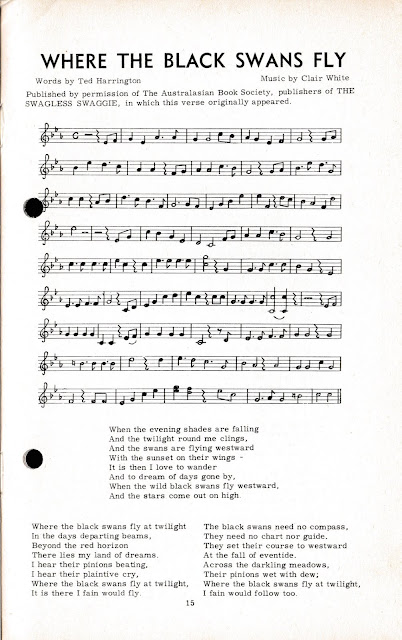 15.  Singabout, Volume 4(1),  October 1960 - WHERE THE BLACK SWANS FLY words by Ted Harrington, music by Clair White. Published by permission of The Australasian Book Society, publishers of THE SWAGLESS SWAGGIE, in which this verse originally appeared. 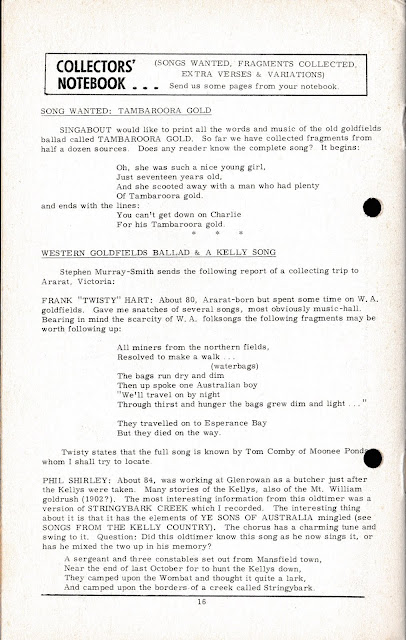 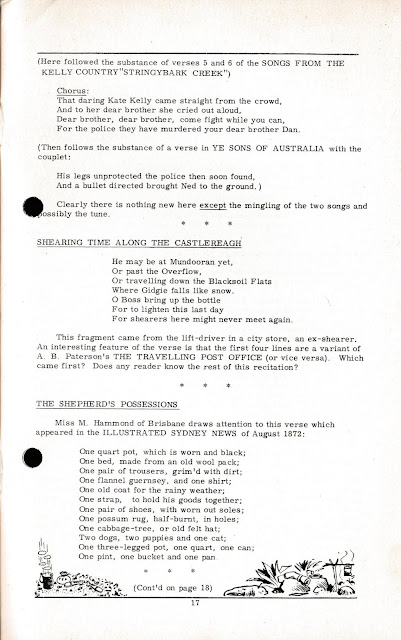 17.  Singabout, Volume 4(1),  October 1960 - WESTERN GOLDFIELDS BALLAD & A KELLY SONG.  (cont)  SHEARING TIME ALONG THE CASTLEREAGH a fragment from a city life driver, an ex-shearer ...variant of A.B. Paterson's The Travelling Post Office.  THE SHEPHERD'S POSSESSIONS  Miss M. Hammond of Brisbane draws attention to this verse which appeared in the Illustrated Sydney News of August 1872. (cont'd on p.18) 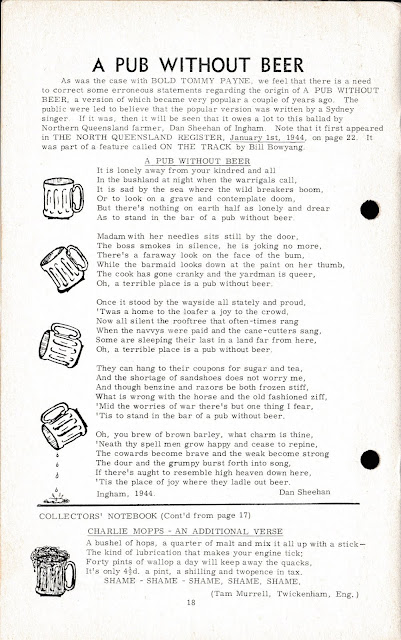 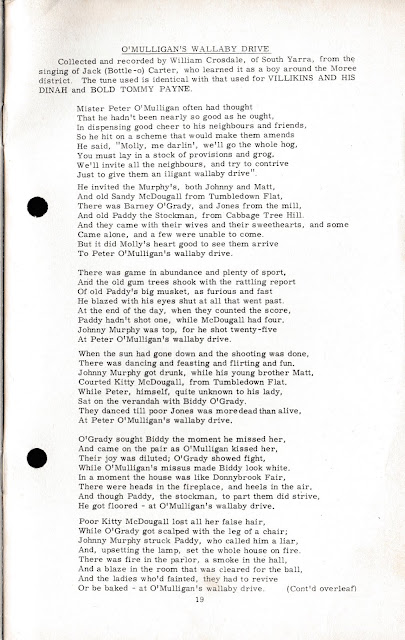 19.  Singabout, Volume 4(1),  October 1960 - O'MULLIGAN'S WALLABY DRIVE,  collected and recorded by William Crosdale, of South Yarra, from the singing of Jack (Bottle-o) Carter, who learned it as a boy around the Moree district. Tune - Villikens & his Dinah. 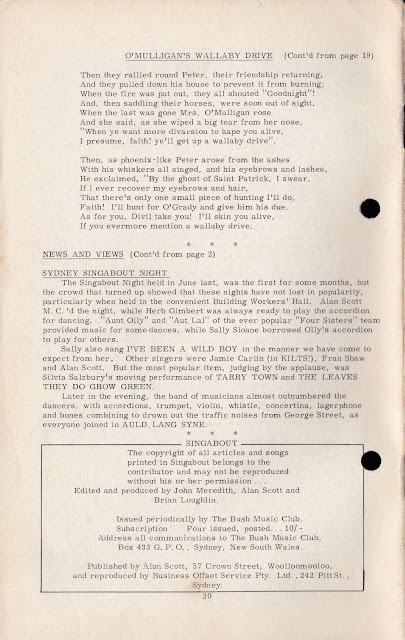