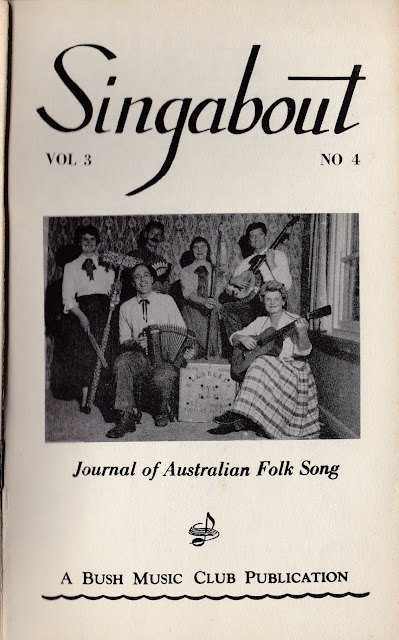 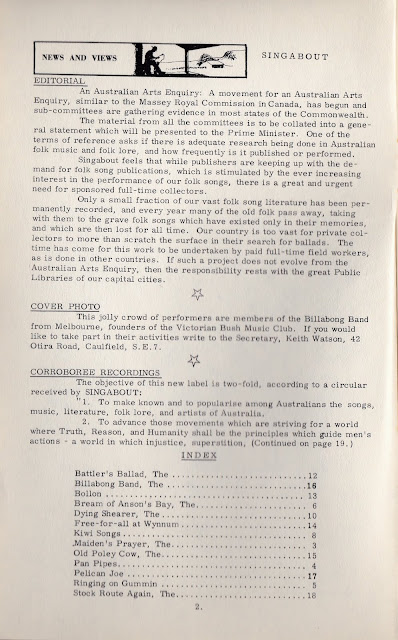 2.  Singabout, Volume 3(4), n.d. (1959-60) - NEWS & VIEWS.  EDITORIAL - An Australian Arts enquiry: A movement for an Australian Arts Enquiry, similar  to the Massey Royal Commission in Canada ... One of the terms of reference asks if there is adequate research being done in Australian folk music and folk lore ...  there is a great and urgent need for sponsored full-time collectors ... as is done in other countries ... If such a project does not evolve from the Australian Arts Enquiry, then the  responsibility rests with the great Public Libraries in our capital cities. CORROBOREE RECORDINGS The objective of this new label ... popularise songs, music, literature, folk lore ... 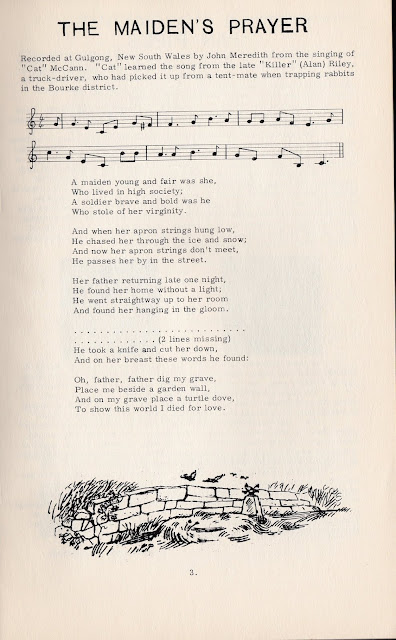 3.  Singabout, Volume 3(4), n.d. (1959-60) - THE MAIDEN'S PRAYER. Recorded at Gulgong, NSW by John Meredith from the singing of "Cat" McCann. "Cat" learned the song from the late "Killer" (Alan) Riley, a truck-driver, who picked it up from a tent-mate when trapping rabbits in the Bourke district. 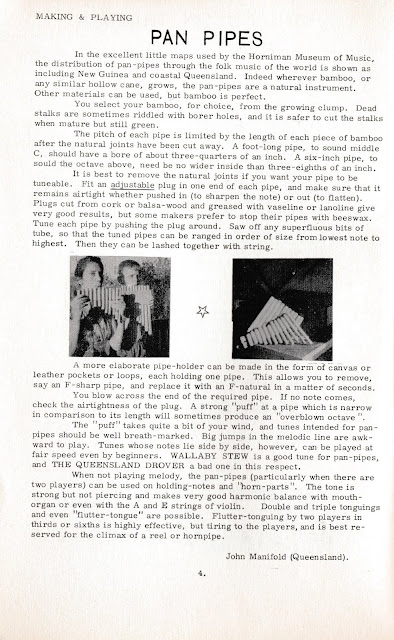 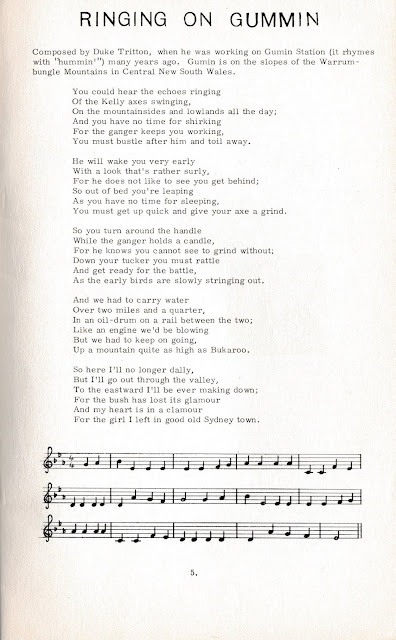 5.  Singabout, Volume 3(4), n.d. (1959-60) - RIDING ON GUMMIN. Composed by Duke Tritton, when he was working on Gummin Station (it rhymes with "hummin") many years ago. Gummin is on the slopes of the Warrumbungle Mountains in Central NSW. 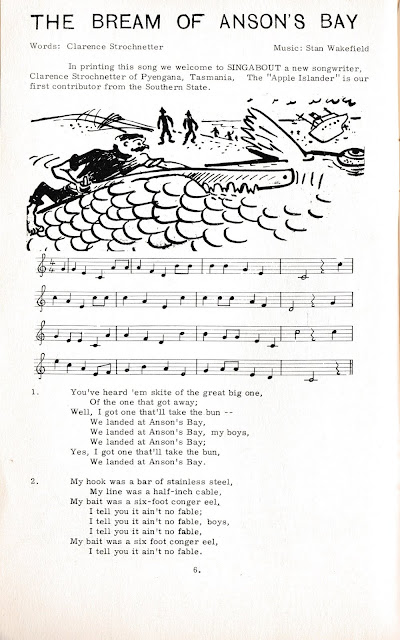 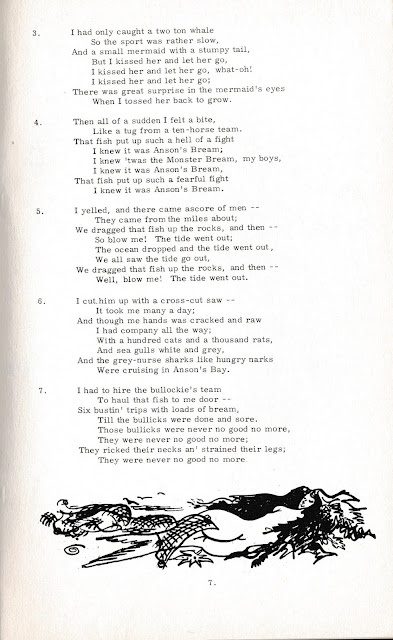 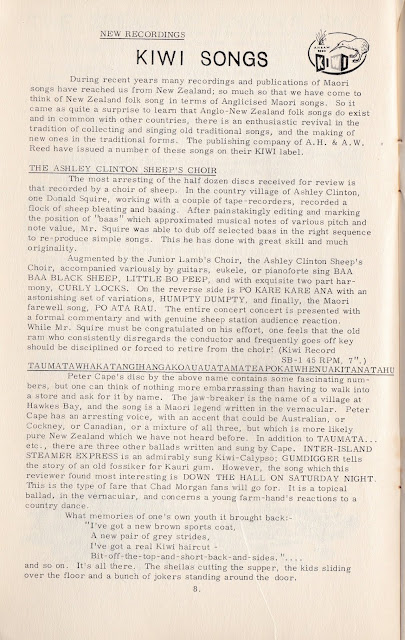 8.  Singabout, Volume 3(4), n.d. (1959-60) - NEW RECORDINGS. KIWI SONGS . During recent years many recordings and publications of Maori songs have reached us ... an enthusiastic revival in the tradition of collecting and singing old traditional songs, and the making of new sones in the traditional forms ...A.H.& A.W. Red have issued a number of these songs on their KIWI label.  THE ASHLEY CLINTON SHEEP'S CHOIR  ...  In the village of Ashley Clinton one Donald Squire, working with a couple of tape-recorders, recorded a mob of sheep. After painstakingly editing and marking the positions of "baas" ... Mr Squire was able to dub off selected baas in the right sequences to re-produce simple songs ... (Kiwi record SB-1-45-PRM, 7") video - The Ashley Clinton Sheep's Choir - Side 1
TAUMATAWHAKATANGIHANGAKOAUAUOTAMATEAPOKAIWHENUAKITANATAHU. Peter Cape's disc of the same name contains some fascinating numbers, but one can think of nothing more embarrassing than having to walk into a store and ask for it by it's name ... a village at Hawkes bay ... a Maori legend written in the vernacular ... Peter Cape singing the title song 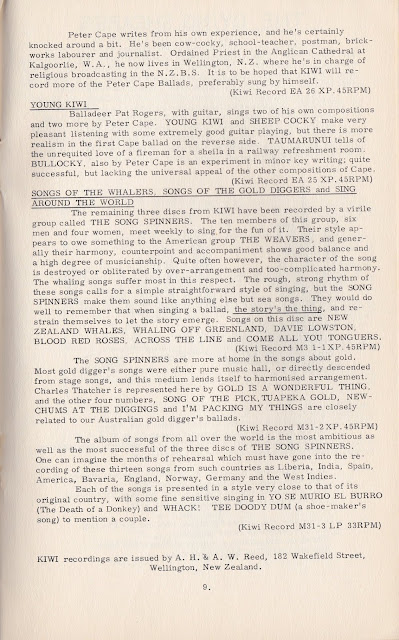 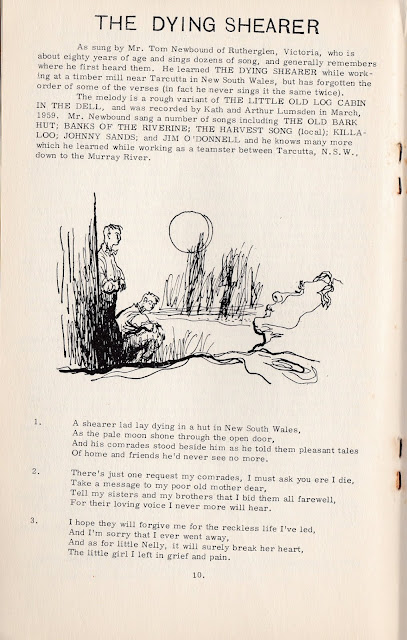 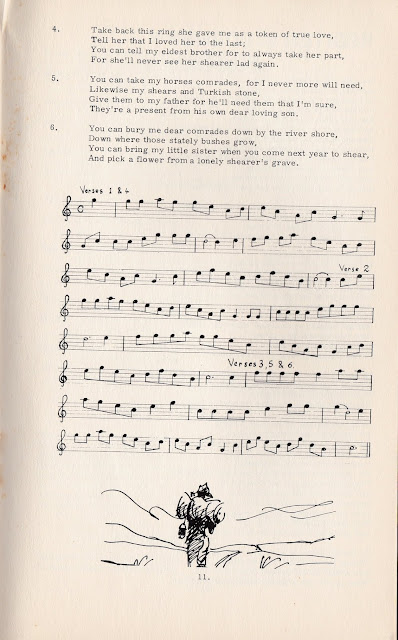 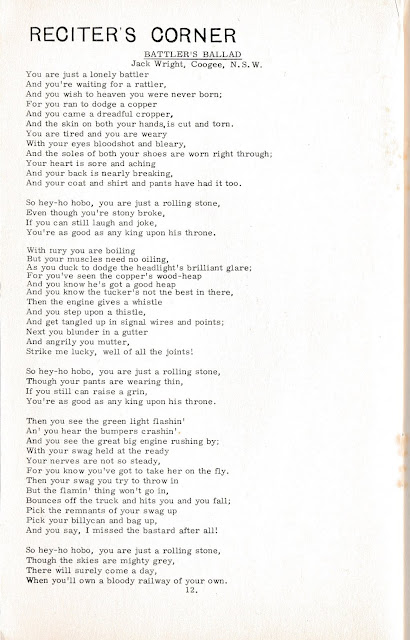 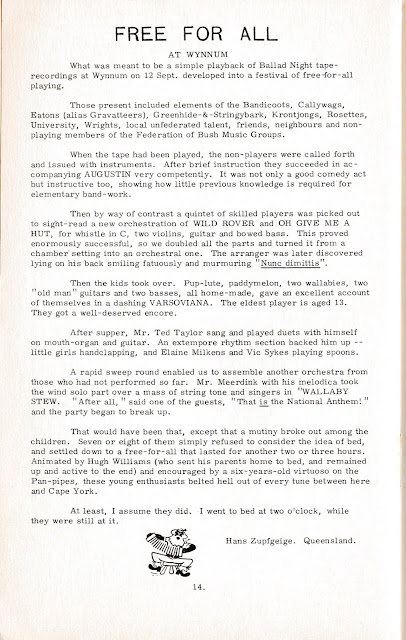 14.  Singabout, Volume 3(4), n.d. (1959-60) - FREE FOR ALL AT WYNNUM. What was meant to be a simple playback of Ballad Night tape-recordings at Wynnum on 12 Sept, developed into a festival of free-for-all playing. Those present included elements of the Bandicoots, Callywags, Eatons (alias Gravatteers), Greenhide-&-Stringybark, Krontjongs, Rosettes, University, Wrights, local unfederated talent, friends, neighbours, and non-playing members of the Federation of Bush Music Clubs ... Hans Zupfgeige, Qld. 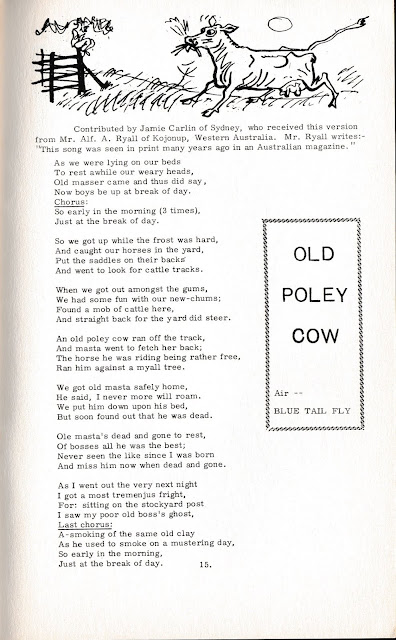 15.  Singabout, Volume 3(4), n.d. (1959-60) - OLD POLEY COW (air - Blue tail fly) contributed by Jamie Carlin of Sydney who received this version from Mr Alf A Ryall of Kojonup, WA. Mr Ryall writes "This song was seen in print many years ago in an Australian magazine" 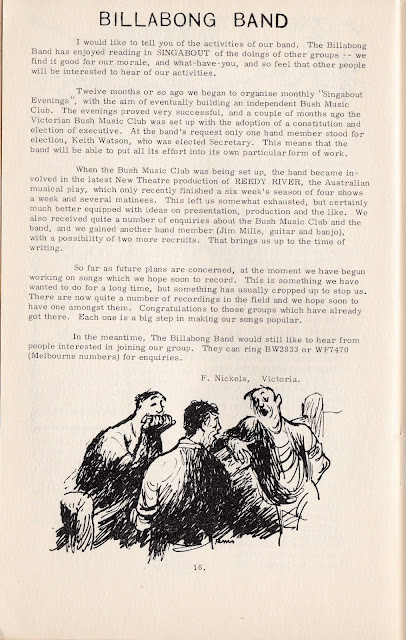 16.  Singabout, Volume 3(4), n.d. (1959-60) - BILLABONG BAND ... has enjoyed reading in SINGABOUT of the doings of other groups ... Twelve months ago or so we began to organise monthly "Singabout Evenings" with the aim of eventually building an independent Bush Music Club. The evenings proved very successful, and a couple of months ago the Victorian Bush Music Club was set up ... the band became involved in the latest New Theatre production of REEDY RIVER ... Frank Nickels, Victoria. 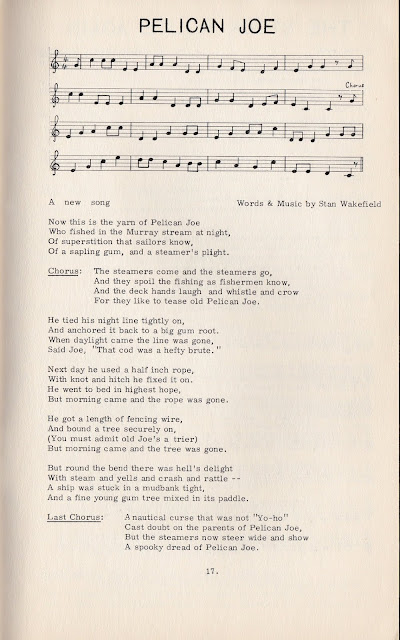 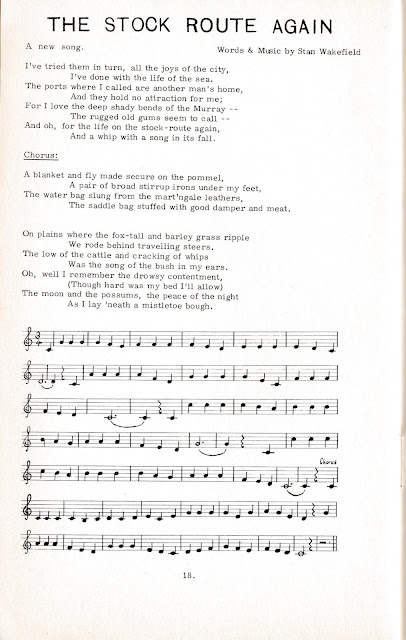 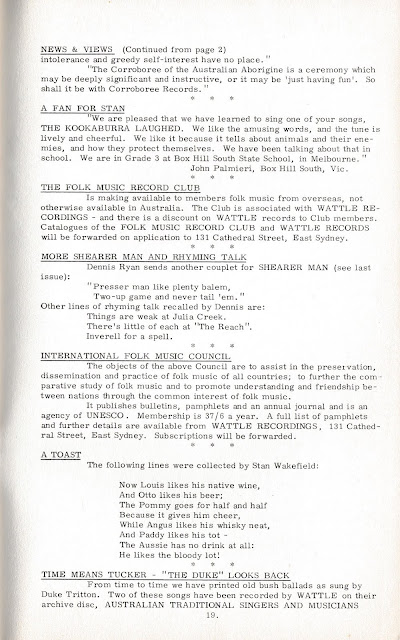 19.  Singabout, Volume 3(4), n.d. (1959-60) - CORROBOREE RECORDINGS (cont).
A FAN FOR STAN - We are pleased that we have learned to sing ... The Kookaburra Laughed ... Grade 3 Box Hill South State School, Melbourne.
THE FOLK MUSIC RECORD CLUB is making available to members folk music from overseas ... The Club is associated with Wattle Records. Catalogues on application ...
MORE SHEARER MAN AND RHYMING TALK from Dennis Ryan.  INTERNATIONAL FOLK MUSIC COUNCIL The objects are to assist in the preservation, dissemination and practice of folk music of all countries ... an agency of UNESCO ... details from Wattle records.  A TOAST collected by Stan Wakefield. TIME MEANS TUCKER - "THE DUKE" LOOKS BACK 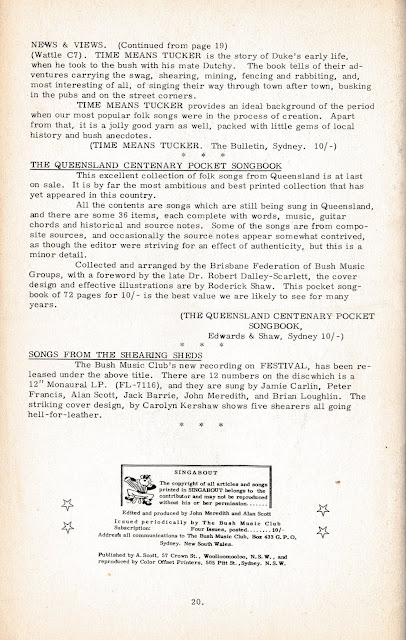 20.  Singabout, Volume 3(4), n.d. (1959-60) -  NEWS AND VIEWS (cont from p.19)
TIME MEANS TUCKER - "THE DUKE" LOOKS BACK  (cont) Time Means Tucker is the story of Duke's life ... available from The Bulletin, Sydney 10/-.  THE QUEENSLAND CENTENARY POCKET SONGBOOK ... it is by far the most ambitious and best printed collection that has yet appeared in this country ... collected and arranged by the Brisbane Federation of  Bush Music groups ... (Available from  Edwards & Shaw, Sydney 10/-)  SONGS FROM THE SHEARING SHEDS - The Bush Music Club's new recording on Festival ... 12 numbers ... sung by Jamie Carlin, Peter Francis, Alan Scott, Jack Barrie, John Meredith and Brian Loughlin. The striking cover design by Carolyn Kershaw shows five shearers all going hell-for-leather.
SINGABOUT Edited and produced by John Meredith and Alan Scot.