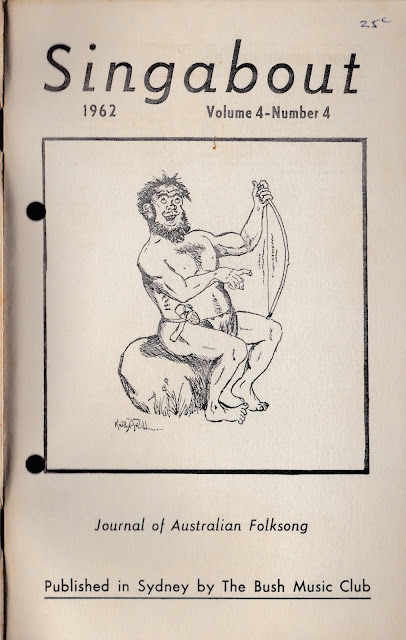 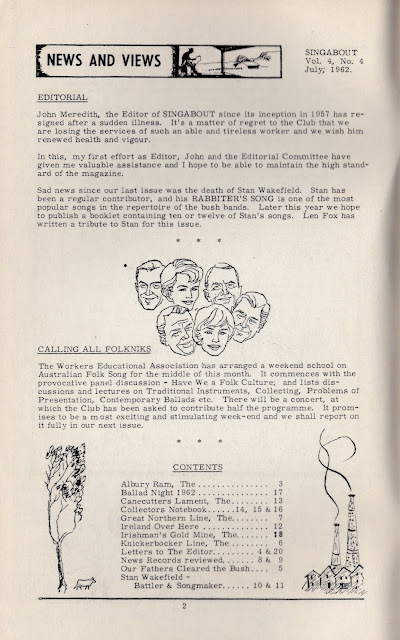 2.  Singabout, Volume 4(4), July 1962 - NEWS AND VIEWS - Editorial. John Meredith, the Editor of SINGABOUT since it's inception in 1957 (sic - should be 1956) has resigned after a sudden illness ... Sad news since our last issue was the death of Stan Wakefield ... CALLING ALL FOLKNIKS The Workers Educational Association has arranged a weekend school on Australian Folk Song ...  CONTENTS 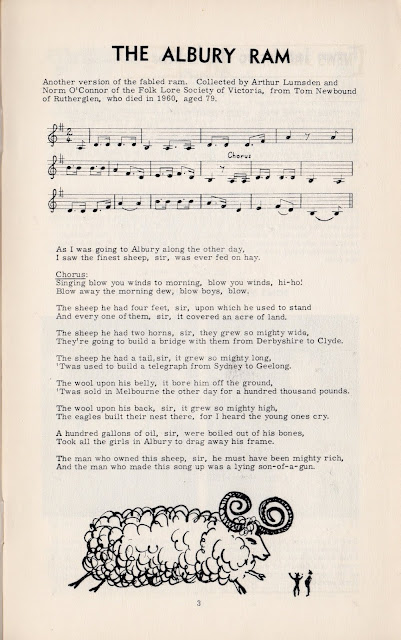 3.  Singabout, Volume 4(4), July 1962 - THE ALBURY RAM . Another version of the fabled ram. Collected by Arthur Lumsden and Norm O'Connor for the Folk Lore Society of Victoria, from Tom Newbound of Rutherglen, who died in 1960 aged 79. 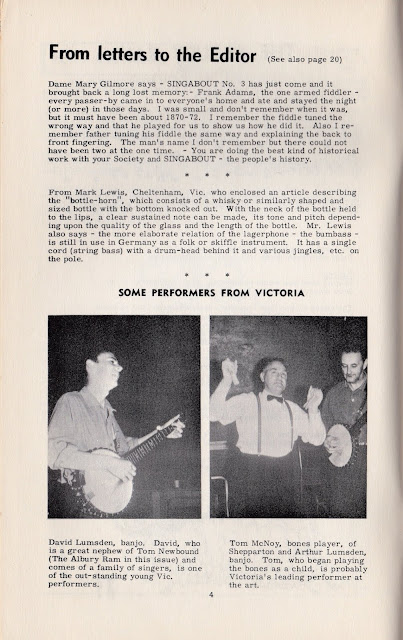 4.  Singabout, Volume 4(4), July 1962 - From letters to the Editor (see also page 20) Dame Mary Gilmore says - SINGABOUT no.3. bought back a long-lost memory: - Frank Adams the one armed fiddler ... about 1870-72. I remember the fiddle tuned the wrong way ... You are doing the best kind of historical work with your Society and SINGABOUT - the people's history.
From Mark Lewis, Cheltenham, Vic, who enclosed an article describing the "bottle-horn" which consists of a whiskey or similar shaped and sized bottle with the bottom knocked out ... Mr Lewis also says  - the more elaborate relation of the lagerphone - the bumbass - is still in use in Germany ... SOME PERFORMERS FROM VICTORIA. David Lumsden & Tom McNoy 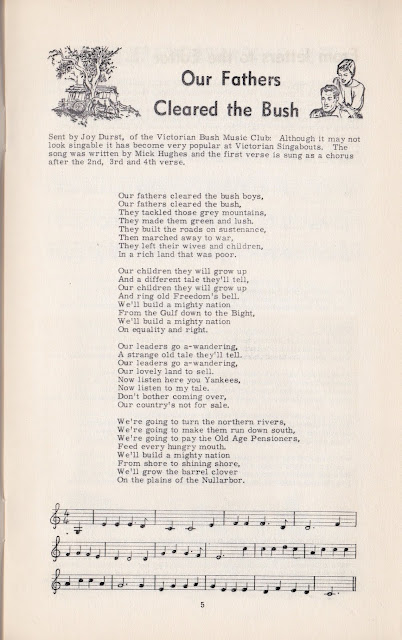 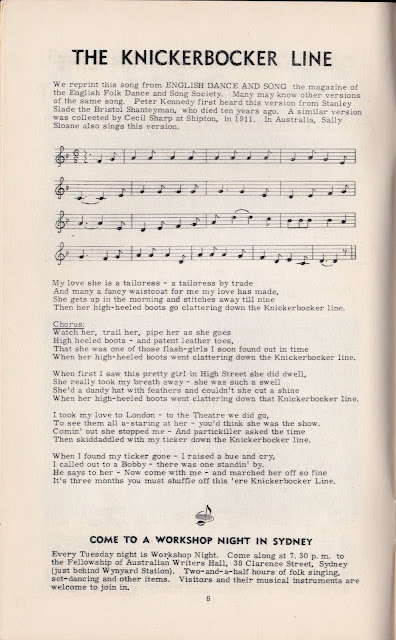 6.  Singabout, Volume 4(4), July 1962 - THE KNICKERBOCKER LINE we reprint this song from English Dance and Song, the magazine of the English Folk Dance and Songs Society ...  Peter Kennedy first heard this version from Stanley Slade the Bristol Shantyman ... A similar version was also collected by Cecil Sharp at Shipton in 1911. Sally Sloane also sings this version.
OME TO A WORKSHOP NIGHT IN SYDNEY. Every Tuesday 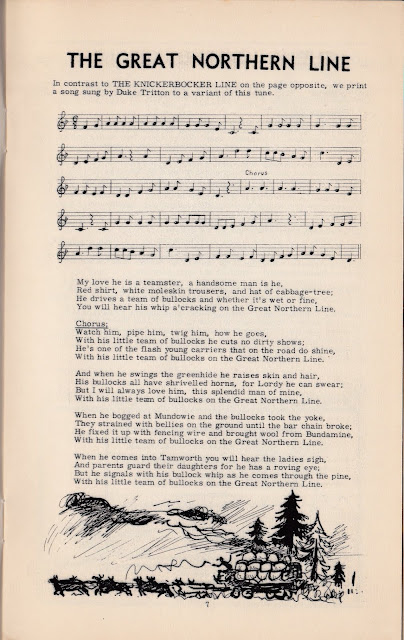 7.  Singabout, Volume 4(4), July 1962 - THE GREAT NORTHERN LINE in contrast to THE KNICKERBOCKER LINE on the page opposite, we print a song sung by Duke Tritton to a variant of this tune. 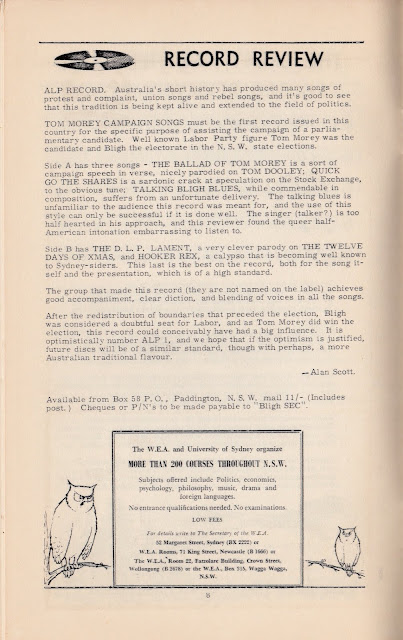 8.  Singabout, Volume 4(4), July 1962 - RECORD REVIEW. ALP RECORD - Australia's short history has produced many songs of protest and complaint, union songs and rebel songs, and it's good to see that this tradition is being kept alive and extended to the field of politics.  TOM MOREY CAMPAIGN SONGS ...  the group that made this record (they are not named on the label) achieves good accompaniment, clear diction, and blending of voices in all the songs. After the re-distribution of boundaries ... Tom Morley did win the election, this record could be considered to have had a big influence  (Alan Scott)
http://www.warrenfahey.com.au/early-sydney-part1/  Daw, Hood & Henderson ... The trio  ... released two EPs ... one for the ALP in support of left-wing Sydney politician Tom Morey ...
Ad for WEA & University of Sydney courses. 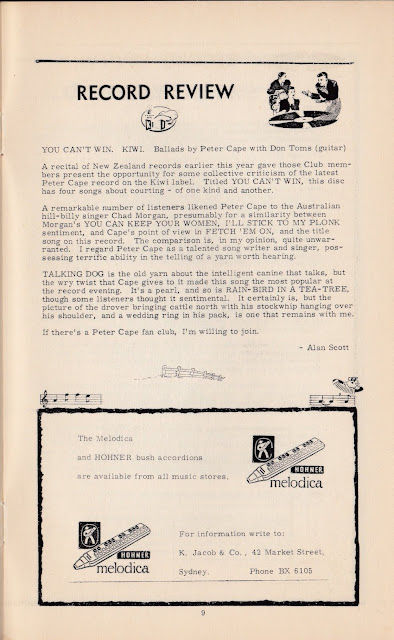 9.  Singabout, Volume 4(4), July 1962 - RECORD REVIEW You Can't Win Ballads by Peter Cape with Don Toms (Kiwi) ... I regard Peter Cape as a talented song writer and singer, possessing terrific ability in the telling of a yarn worth hearing ... Alan Scott. Ad for Melodia and HOHNER bush accordion 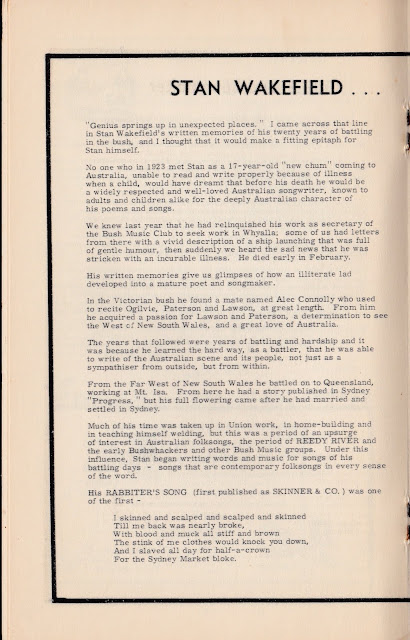 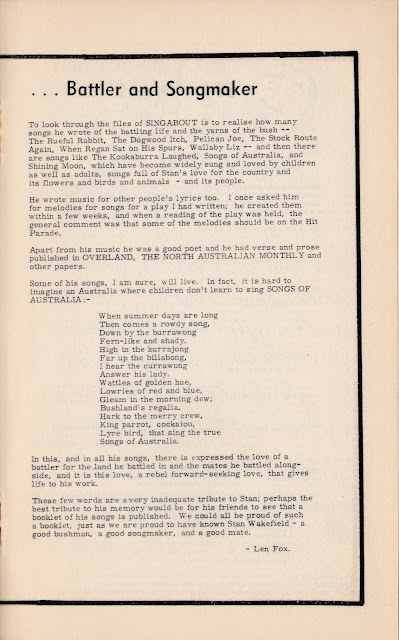 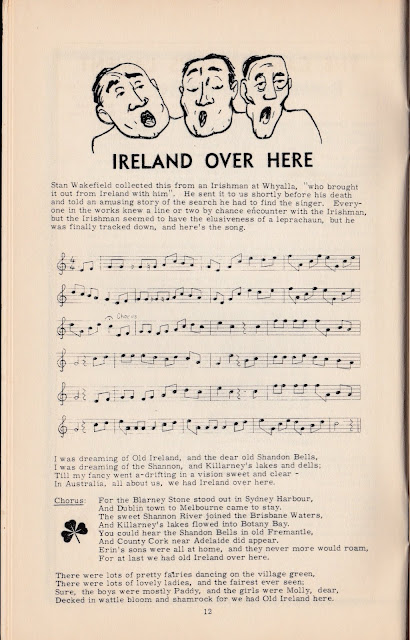 12.  Singabout, Volume 4(4), July 1962 - IRELAND OVER HERE. Stan Wakefield collected this from an Irishman at Whyalla "who brought it out from Ireland with him". He sent it to us shortly before his death ... 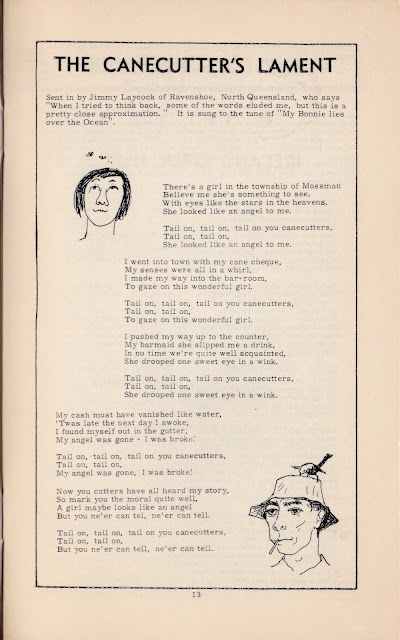 13.  Singabout, Volume 4(4), July 1962 - THE CANECUTTER'S LAMENT. Sent in by Jimmy Laycock of Ravenshoe, North Queensland, who says "When I try to think back, some of the words eluded me, but this is a pretty close approximation" It is sung to the tune of "My bonnie lies over the ocean". 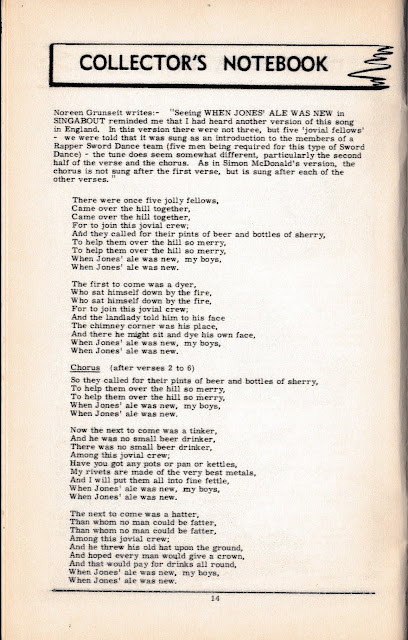 14.  Singabout, Volume 4(4), July 1962 - COLLECTOR'S NOTEBOOK. Noreen Grunseit writes - Seeing WHEN JONES' ALE WAS NEW in SINGABOUT reminded me of another version of the song in England ... 5 jovial fellows  ... the tune does seem somewhat different ... 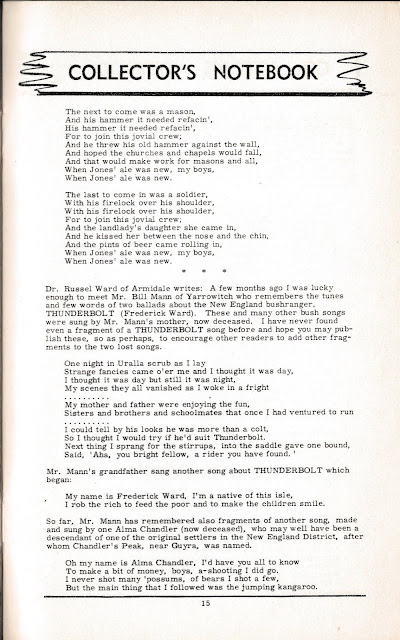 15.  Singabout, Volume 4(4), July 1962 - COLLECTOR's NOTEBOOK - When Jones' Ale Was New (cont)
Dr Russel Ward of Armidale writes: A couple of months ago I was lucky enough to meet Mr Bill Mann of Yarrowich who remembers the tunes and a few words of two ballads about the New England bushranger THUNDERBOLT (Frederick Ward) ... One night in Uralla scrub I lay, Strange fancies came o'er me and I thought it was day  (later known as Thunderbolt's Dream)  ... and My name is Frederick Ward, I'm a native of of this isle, I rob the rich to feed the poor, and to make the children smile ... Mr Mann has remembered also fragments of another song .... Oh, my name is Alma Chandler, I'd have you all to know/ To make a bit of money, boys, a-shooting I did go ... (2 verses)

The complete words of THUNDERBOLT'S DREAM were later collected by Barry McDonald & recorded on a CD issued by UNESCO, 1998. Australia : music from the New England tablelands of New South Wales, 1850-1900
Recordings collected by Barry McDonald. Collection conceived and created by Barry McDonald, Mark Rummery and Cathy Ovenden.
track note for Thunderbolt's Dream - Mark [Rummery], button accordion - Barry, voice
Bill Mann of Walcha sang this, the only complete song about the Tablelands bushranger yet recovered in the field, although fragments of other songs do survive. All are cast in the first person, lending weight to the tradition that Thunderbolt, a skilled dancer and musician, himself composed them for circulation amongst his friends. Thunderbolt was the subject of a very strong noble-robber cult from the early 1860s. He was renowned for his non-violent resistance to authority, his horsemanship, his chivalrous attitude to women, and for evading capture for seven years - longer than any other bushranger. 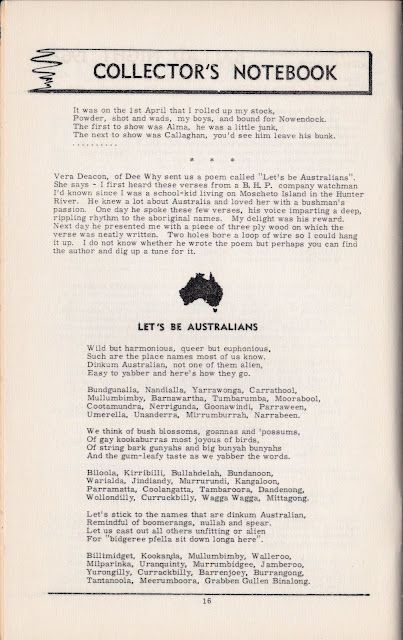 16.  Singabout, Volume 4(4), July 1962 - Dr Russel Ward (cont.)  Vera Duncan of Dee Why sent us a poem called "Let's be Australians" I first heard these verses from a BHP company watchman I'd known  since I was a school-kid living on Moscheto Island in the Hunter  River ... 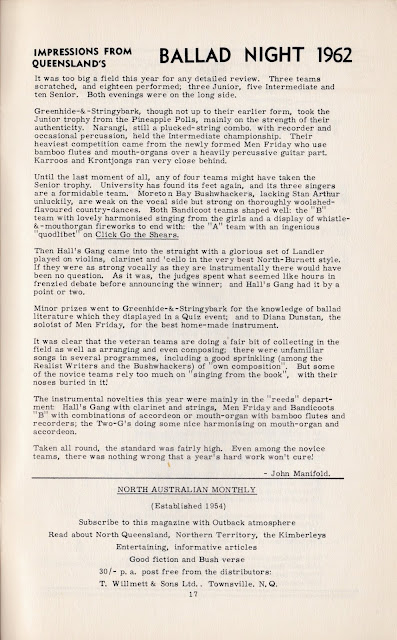 17.  Singabout, Volume 4(4), July 1962 - Impressions from Queensland's BALLAD NIGHT 1962. It was too big a field this year for any detailed review. Three teams scratched and eighteen performed, three Junior, five Intermediate and ten Senior. Both evenings were on the long side. groups - Greenhide-&_Stringybark, Pineapple Polls, Narangi, Men Friday, Karoos, Krontjongs, University, Morton Bay Bushwhackers, Bandicoots - A & B, Hall's Gang, Realist Writers.  It was clear the veteran teams were doing a fair bit of collecting in the field as well as arranging and even composing ... Taken all round, the standards were fairly high ... John Manifold. Ad for NORTH AUSTRALIAN MONTHLY. 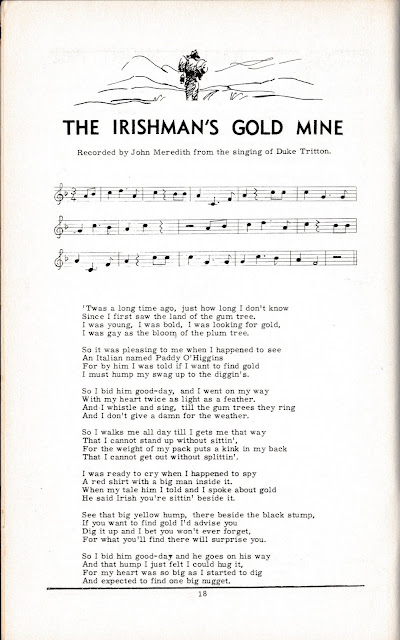 18.  Singabout, Volume 4(4), July 1962 - THE IRISHMAN'S GOLD MINE Recorded by John Meredith from the singing of Duke Tritton 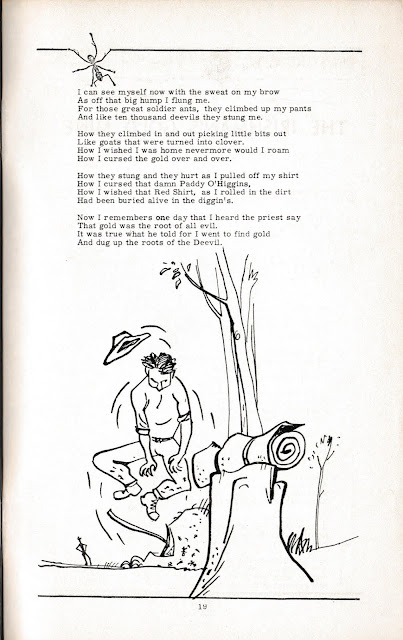 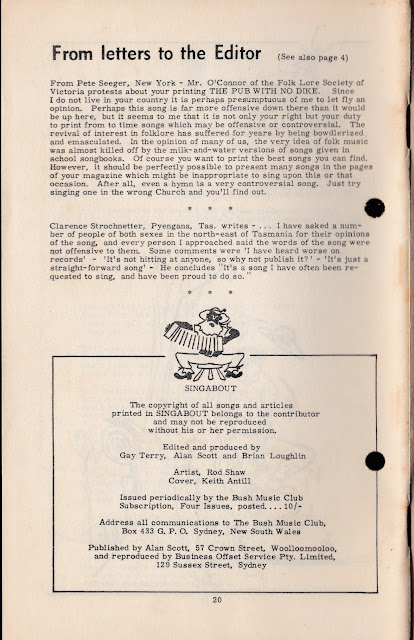 20.  Singabout, Volume 4(4), July 1962 - x From LETTERS TO THE EDITOR (see also page 4) From Pete Seeger , New York - Mr O'Connor of the Folk Lore Society of Victoria protests about your printing THE PUB WITH NO DIKE  ... it seems to me to me that it is not only your right but your duty to print from time to time songs that may be be offensive or controversial. The revival of interest in folklore has suffered for many years by being bowderlized and emasculated ... It should be perfectly possible to present many songs in your magazine which might be inappropriate to sing upon this or that occasion. After all, even a hymn is a very controversial song. Just try singing one in the wrong church ...
SINGABOUT. Edited and produced by Gay Scott, Alan Scott and Brian Loughlin.  Artist, Rod Shaw. Cover, Keith Antill.