Once again Jason & Chloe have produced another excellent CD, which is available through their website, or from them at Festivals & concerts. 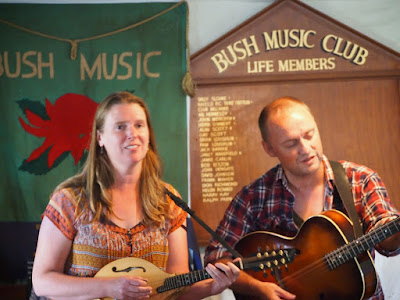 Introduction from their website, where you will also find lyrics of all the tracks.

The spirit of Henry Lawson and John Dengate form the backbone of this album - no other two writers have given us sharper tools. In particular, we'd like to dedicate this album to our mate, the late John Dengate, whose words make up a third of the record. The album is part of our ongoing effort to catch and carry forward what has been passed to us. We have attempted to make John's words our own, and also sink his work into the wider tradition. The Lawson / Dengate and Paterson / Dengate medleys came instinctively and quickly - one in performance, and one in a dream - and they are distillations of our intention for the wider album.


The words of Lawson and Dengate capture an Australia that’s now seldom explored on radio or television, and largely ignored by the major newspapers as it flies counter to the mysterious world of our elected "representatives". While this has no doubt been the case for generations, it seems to us that this other republic of Australia fades from the public consciousness by the year. Yet it is there still - in our home, village, and wherever our wide Australian travels take us. It is in the open hearts and hands of our mates.
This album is part celebration of this hidden republic, and part call to action on its behalf. It is our personal statement against what seems to us a catastrophic failure of leadership in this country, offered up in the never ending struggle for social justice. The songs show that particularly Australian combination of humour, anger and a sense of bush justice that is not perfect, but ideal in our hearts. Importantly, the next biggest contributor to the record is the great Anon. These are the songs of the front bar, the kitchen, the football teams, the shearers' huts, the rail and road, the campfires of the bolters and bushrangers, the trenches... It is corrugated iron music - music with the hair still on it! This is campfire sedition.
======================== 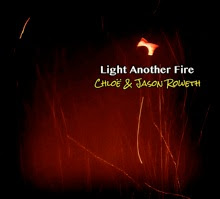 
By dedicating this CD to Henry Lawson and John Dengate, Chloe and Jason Roweth acknowledge the Australian traditions that have influenced their selection of works for this CD.
This dedication would have moved John beyond words; indeed, the songs brought both laughter and tears to my eyes as I listened. Jason and Chloe seemed to have selected many of my favourite songs and tunes which evoke so many memories. Over twenty other Australian song writers are also represented on this CD.
Jason’s voice has gained strength and character over the years and Chloe’s always inspiring voice is even richer, so both bring a delightful interpretation to many songs.
I think it is important that they have made the songs their own so that in those written by John Dengate they have not tried to sound like John in his performances. Actually his presentation and words sometimes changed as the times and situations in a living culture changed. In some cases they have brought new life to John’s words and listening to their music is delightful.
They both play a number of traditional instruments and at times are joined by Bill Browne on percussion and Baz Cooper on accordion and piano. One could write more about the music but suffice to say you could enjoy the CD on this level too.
The CD starts with Lawson’s Freedom on the Wallaby, a stirring and provocative song. This rebel chorus was sung with gusto at Bush Music Club meetings in the 1960s but John and I last sang it together at Gay Scott’s funeral early in 2013. Jason has added John’s last written verse of defiance: we go on disobeying to Lawson’s words for a very strong start to the CD.
The next introductory tune for John Hospodaryk’s words about the stark life in the Female Factory was the Croppy Boy often used for the Convict Maid.  It recalls memories of times when most folk singers had it in her repertoire but Chloe’s singing surpasses the best renditions with very different words from the moralistic sentiments. There is also a delightful version of Sally Sloane’s traditional singing of Lovely Molly as well as Molly Darling which is a sweet sentimental sing-a-long song from 1871.
When I first heard The Man who Struck O’Hara I thought of the ‘bogan slogan’ PM we had recently booted and thought: good to hear that ‘he won’t be back’! Times change as I’ve already commented, and a number of people find Chad Morgan hasn’t stood the test of time, but I have always laughed at the wry humour in his comments about characters and life’s situations in country songs. This has similarities to The Shit Flung on the Floor – by Invitation Only which refers to a Binalong incident in 1913, which involved the class issues of the day.
There is an amazing amount of history in the selection of songs which one doesn’t get from the standard history of Australia books, Indeed, one could write pages on that aspect of the CD alone.
I think songs about public transport and train trips will be even more relevant as the city of Sydney copes with an overhaul of city transport systems. The only way to cope is to maintain a sense of humour, but definitely do not ‘lie down on the tracks.'
This selection gives an unique insight into quality of Australian songs and the variety of tunes. The cover with its campfire dark exterior and wattle-golden interior gives a symbolic meaning to the contents, and the initial stiffness loosens with use.
This double album CD deserves strong promotion and is ideal for Christmas gifts, especially for those who ask where have the Australian traditional and protest songs gone!
Light Another Fire is available for purchase / download online from the Roweth’s website www.rowethmusic.com.au

Email ThisBlogThis!Share to TwitterShare to FacebookShare to Pinterest
Labels: Book and CD reviews