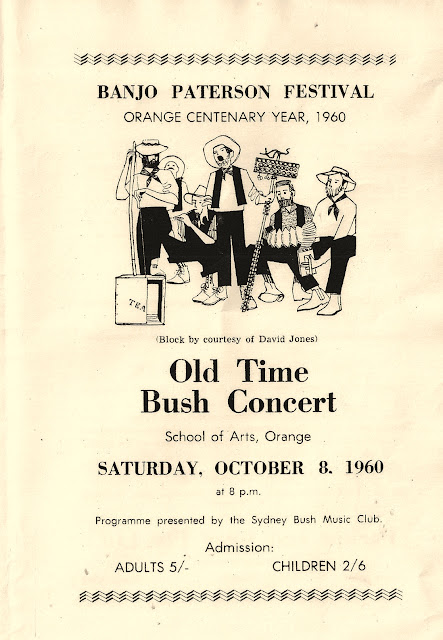 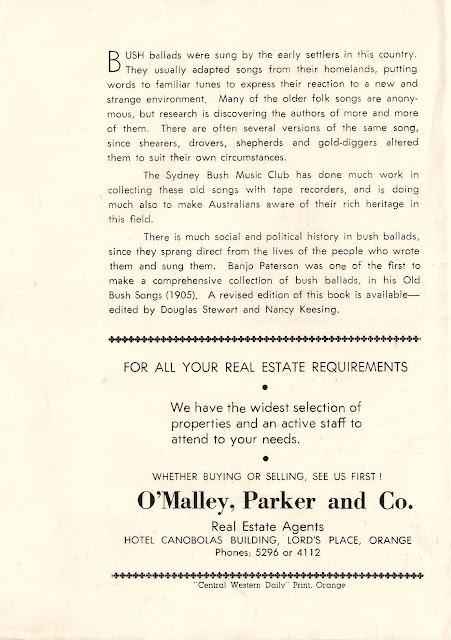 Bush Ballads were sung by the early settlers in this country. They usually adapted songs from their homelands, putting words to familiar tunes to express their reaction to a new and strange environment. Many of the older folk songs are anonymous but research is discovering the authors of more and more of them. There are often several versions of the sane song, since shearers, drovers, shepherds and gold-diggers altered them to suit their own environments.

The Sydney Bush Music Club has done much work in collecting these old songs with tape recorders and is doing much also to make Australians aware of their rich heritage in this field.

There is much social and political history in bush ballads, since they sprang direct from the lives of the people who wrote them and sung them. Banjo Paterson was one of the first to make a comprehensive collection of bush ballads, in his Old Bush Songs (1905) a revised edition of this book is available - edited by Douglas Stewart and Nancy Keesing. 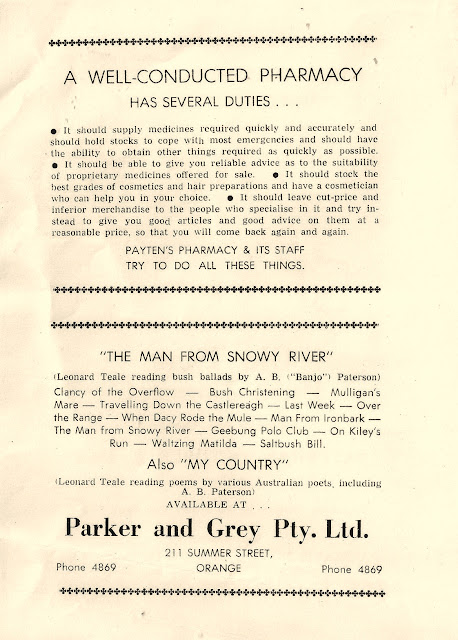 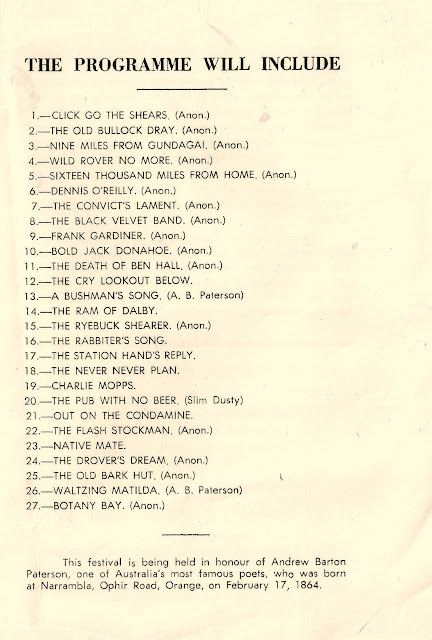 A copy of this leaflet was pasted into the red Minutes Book, along with the following handwritten report & newspaper clipping. 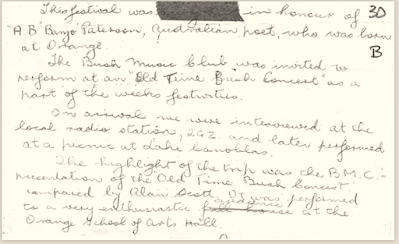 This festival was (missing word) in honour of A.B 'Banjo" Paterson, Australian poet, who was born at Orange.  The Bush Music Club was invited to perform at an "Old Time Bush Concert" as a part of the Festival. On arrival we were interviewed at the local radio station 2GZ, and later performed at a picnic at Lake Canobolas. The highlight of the trip was the BMC's presentation of the "Old Time Bush Concert" compared by Alan Scott. It was performed to a very enthusiastic audience at the Orange School of Arts. 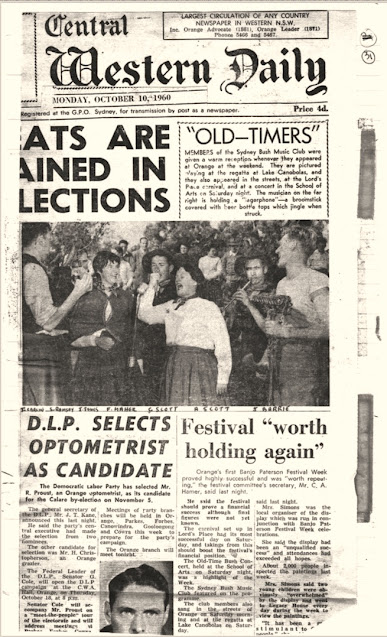 Clipping from CentralWestern Daily, Monday October 19, 1960. "OLD-TIMERS" Members of the Sydney Bush Music Club were given a warm reception wherever they appeared at Orange at the weekend.  They are pictured playing at Lake Canobolas, and they also appeared in the streets, at the Lord's Place carnival, and at a concert at the School of Arts on Saturday night. The musician at the far right is holding a "lagerphone" - a broomstick covered with beer bottle tops which jingle when struck.
Festival 'worth holding again"  Orange's first Banjo Paterson Festival Week proved highly successful and was "worth holding again" ... financial success ... carnival set up in Lord's Place  ... Old Time Bush concert was a highlight ... club members also sang in the streets ... on Saturday and at the regatta at Lake Canobolas ... 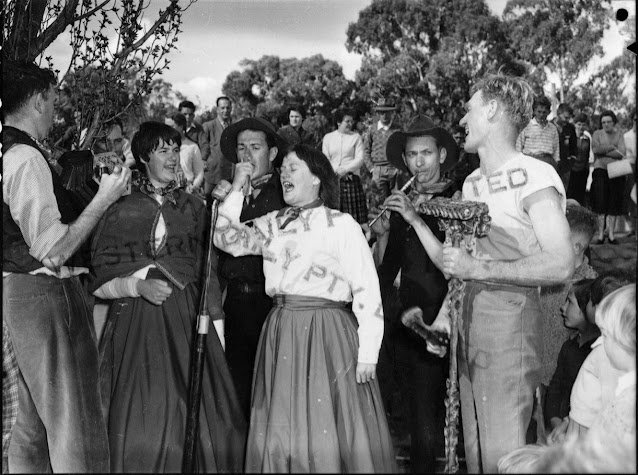 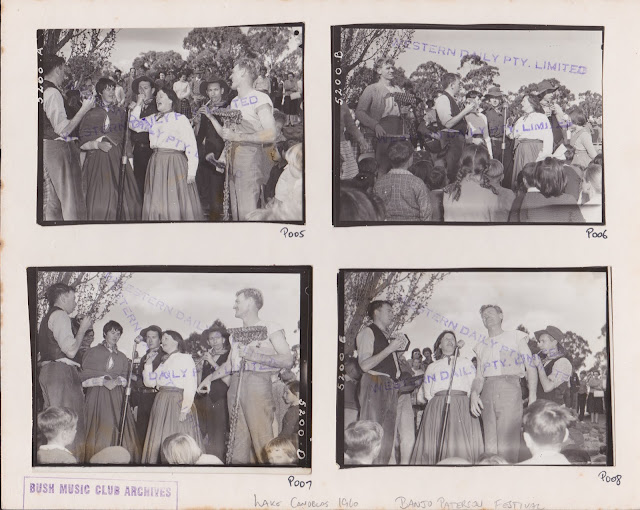 from Frank Maher - Practices were held ta Jack Barrie's place before the Festival as he had a large living area (good for dancing)  Frank, 2021.

The Banjo Paterson Festival and the Bush Music Club. 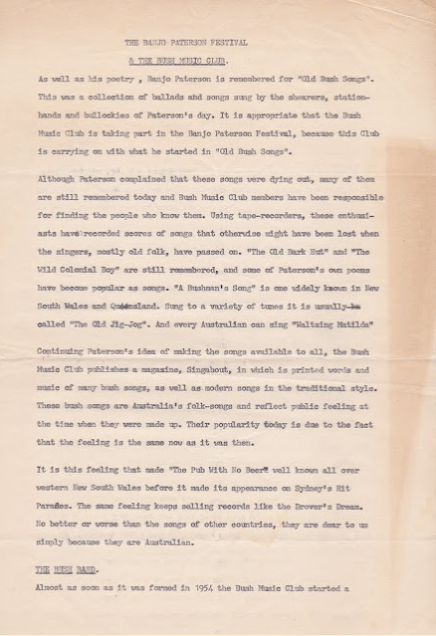 The Banjo Paterson Festival
and the Bush Music Club

As well as his poetry, Banjo Paterson is remembered for "Old Bush Songs". This was a collection of ballads and songs sung by the shearers, station-hands and bullockies of Paterson's days. It is appropriate that the Bush Music Club is taking part in the Banjo Paterson Festival, because this Club is carrying on with what he started in "Old Bush Songs".

Although Paterson complained that those songs were dying out, many of these are still remembered today and Bush Music Club members have been responsible for finding people who knew them. Using tape-recorders, these enthusiasts have recorded scores of songs that otherwise might have been lost when the singers, mostly old folk have passed on. "The Old Bark Hut" and "The Wild Colonial Boy" are still remembered, and some of Paterson's own poems have become popular as songs. "A Bushman's Song" is one widely known in New South Wales and Queensland. Sung to a variety of tunes it is usually called "The Old Jig-Jog". And every Australian can sing "Waltzing Matilda"

Continuing Paterson's idea of making the songs available to all, the Bush Music Club publishes a magazine, Singabout, in which is printed words and music of many bush songs, as well as modern songs in the traditional style. These bush songs, are Australia's folk-songs and reflect public feeling at the time when they were made up. Their popularity today is due to the fact that the feeling is the same now as it was then.

It is this feeling that made "The Pub With No Beer" well known over western New South Wales before it made its appearance on Sydney's Hit Parades. The same feeling keeps selling records like The Drover's Dream. No better or worse than the songs of other countries, they are dear to us simply because they are Australian. 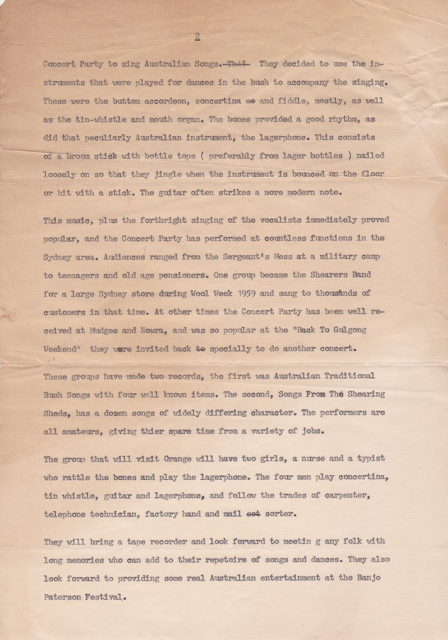 Concert Party to sing Australian songs. They decided to use the instruments that were played for dances in the bush to accompany the singing. These were the accordion, concertina and fiddle, mostly as well as the tin-whistle and mouth organ. The bones provided a good rhythm, as did that particularly Australian instrument, the lagerphone. This consists of a broomstick with bottle tops ( preferably from lager bottles ) nailed loosely on so that they jingle when the instrument is bounced on the floor or hit with a stick. The guitar often strikes a more modern note.

This music, plus the forthright singing of the vocalists immediately proved popular, and the Concert Party has performed at countless functions in the Sydney area. Audiences range from the Sargeant's Mess at a military camp to teenagers and old-age pensioners. One group became The Shearers Band for a large Sydney store during Wool Week 1959 and sang to thousands of customers at that time. At other times the Concert Party has been well received at Mudgee and Nowra, and was so popular at the "Back to Gulgong Weekend" they were invited back specially to do another concert.

These groups have made two records, the first was Australian Traditional Bush Songs with four well-known items. The second, Songs from the Shearing Sheds, has a dozen songs of widely differing character. The performers are all amateurs, giving their spare time from a variety of jobs.

The group that will visit Orange will have two girls, a nurse and a typist who rattle the bones and play the lagerphone. The four men play concertina, tin whistle, guitar and lagerphone, and follow the trades of carpenter, telephone technician, factory hand and mail sorter.

They will bring a tape recorder and look forward to meeting any folk with long memories who can add to their repertoire of songs and dances. They also look forward to providing some real Australian entertainment at the Banjo Paterson Festival. (BMC Archives)