From the Archives - Dance in the 1950s & 1960s - contributions to our 60th Anniversary Group discussions.

Rose & I were dancing at BMC in Sydney in the mid-’60s. We remember doing:-

To keep our homesick Irish friends happy we also did a few specials like the Waves of Tory, Siege of Ennis etc.

There were probably others now lost in the dim recesses. Jamie & Frank would certainly remember better than I.

We played lots of dance music at Concert Party gigs but I don’t remember us getting the public up to dance at that time.

Dancing was quite popular with our group of friends back then.
There was a lot of jumping around and cool moves at live jazz venues.

There was a mix of old and modern enjoyed at various other venues at around that time::-

G'day Rob and All

I have been talking with Sharyn and Sandra about writing a history of dance in the BMC. Sally Leslie is keen to work on the project with me and hopefully, Anne Pidcock will work with us as well.

Sally and I spoke about it at a dinner a few weeks ago and as John H was there he suggested it be extended to all of NSW. I think at this stage we will stick to dance in the BMC. I believe Anne Young has done some research on dance in NSW so she is probably the best to cover the State. I may see her at the Balmain dance this Sat and have a chat.

I have Woody's list of 7 dances he briefly spoke of at the National Conference which is very different to the list from this workshop. This is quite exciting, I would love to find out more about this workshop.

At this stage, we don't have a lot of information about the early years of dance in the BMC but we can easily cover from the mid-'70s onwards.

For a couple of years in the early ‘90s (19 not 18) I was contracted to the National Film and Sound Archive which gave me an opportunity to use my love of film in the work we were doing. Unfortunately, the wheels fell off the NFSA Folklore programme.

It was during this time that I was looking at the early Eureka Youth League dances that became the basis for what we later called ‘bush dancing’.

A couple of my interviews from that era from NFSA (not NLA!) are included below.

A couple of other links without thinking too much.

http://catalogue.nla.gov.au/Record/2136862
Jen would have memories of her mother, Pam Loughlin – a MOST important person in the history of BMC dance

Title No: 82445
Title: [KAY, HARRY AND KAY, ANNE: INTERVIEWED BY ROBERT WILLIS: ORAL HISTORY]
Production Date: 10 May 1991
Produced as: Field recording; Music; Oral history
Category: Folk music
Media: Sound Recording, Unpublished
Summary: Harry Kay talks about the formation and demise of the original Bushwhackers, his early days in the fitting and turning trade, the Communist oriented Eureka Youth League (EYL), and the formation of the Rambleers, based on the American group, the Weavers. Anne Kay talks of dancing in the EYL. The interviewees relate stories of several other performers, and Harry sings his own song 'Why can't we be fair dinkum Aussies?'. General note: Summary by the interviewer.
Place: Recording Baulkham Hills, N.S.W.
Country of Origin: Australia

Of course, if you are interested in the dances done in the early days of BMC, you should speak with Noreen Grunseit, who taught most of the dances at BMC. We even went to her place on weekends to polish our performances. She often discussed these and adapted these with Merro, who liked to dance but often played too. [ e.g Flying Pieman] Jamie Carlin was very light on his feet in those days. and would recall the dances and tunes. Eureka Youth League taught the dances and Dick Diamond included dances in Reedy River, which became part of BMC repertoire. 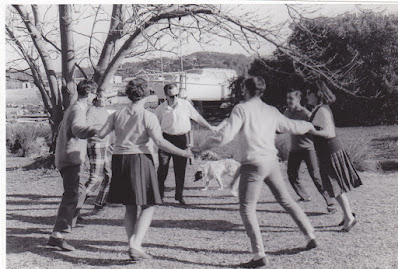 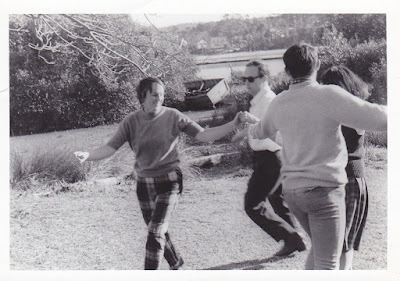 Extract from August 1968 newsletter which might refer to the same event. (BMC archives)

SINCE I started this email two more have come in which saves me writing more ... I didn't attend so often in the late 60s-70s as had family to mind and John was more interested in songs and music that dancing, but from early 1960-to '68 we taught the dances at a number of events. Circassian Circle and Strip the Willow were very popular dances.

I agree with Ralph's list of dances that were performed and enjoyed at Singabouts and BMC nights. But in the early 1960s we certainly got the audience up to dance, in fact, John and I often taught the bush dances, as did Gay and Alan Scott and Pam and Brian Loughlin but we kept it simple and vigorous. I recall a funny night in Sydney Town Hall in the 1970s when John and Alan stormed off the floor saying who made up these complicated dances - this isn't bush dancing! I think it was the Scottish four posters dance???

Also in the 50s-60s, folk dance was part of the P.E. [physical education] curriculum so many of us learnt all these dances at school too. I have a copy of the NSW Dept of Education blue book standard curriculum for NSW public school. Girls schools were more likely to be taught these dances than boys, who did boxing ... might explain something!

Then I note Rob has Noreen on film and Harry and Ann Kay, who were before my time,

So you have lots of material there to keep people in the BMC busy...

Have fun and don't forget to kick up your heels every now and then.

How's this for a precomputer filing system? I found my [1958] copy of folk dances in NSW Dept Ed ... Material for Traditional Folk DANCING Lessons ... now to see if my new printer/scanner works!!!

In the meantime, some interesting observations, - in sixth grade/class marked with * 'Specially suited to Boys' -

while also included without * was

and many more e.g The American polka was in 5th grade, The Galopede and Durham Reel was in fourth grade and The Soldier's dance and Shoemakers Dance was in 3rd class lessons. Wonder if that was Heel and toe/Brown Jug polka, which I still teach to my mostly Asian City of Sydney multicultural groups for the Aussie's section/ bush dancing?