From the Archives - Burl Ives & the popularisation of Australian folk song

This well-used folio is available in our Reference Library. (The State Library of Victoria has a pdf download of a pristine copy of this folio here)

In 1940 priest & musician Dr Percy Jones published an appeal for Australian folksongs in Melbourne's Sun News-Pictorial & collected many examples, some of which were later  given to Burl Ives when he visited Australia.
Australia's Folk-Songs by Percy Jones   - THESE last few years have witnessed a welcome and long overdue interest in Australian historical research. For far too long, this aspect of Australiana remained the Cinderella of Australian publications. It is therefore not very surprising to find even knowledgable people taking for granted the statement that "Australia possesses only one folk-song, 'Waltzing Matilda.''' There has been a great deal of printers' ink spilt over the authorship of this popular song, but to my mind, this energy could have well been diverted into a much more important channel of research – namely, the rescuing from oblivion of the large number of other folk-songs which were characteristic of the pioneering days of this country.  (read on)
This article (minus the graphics) was first published in 1946 in the first edition of the magazine TWENTIETH CENTURY pp. 37-43

How Burl Ives popularised Australian folk songs. This program was broadcast by Radio National's RareCollections on Sunday 31 August 2014 & audio is no longer available.
The summary includes a pdf download of an article "Bring me songs" says Burl Ives in Australian Woman's Weekly, 7th May 1952, page 12, extract: One of the things I look forward to in Australia is that there will be, I know, a large number of people come and see me with songs for me to sing. You can tell Australians I want them to do that. I'm on the look-out for any real indigenous Australian folk songs, adapted aboriginal songs, or any English folk songs that have been kept alive one way or another -  The article is available here in TROVE.
Wikipedia on Australian Folk Songs (Decca DL 8749) is a 1958 album by Burl Ives  During his visit to Australia in 1952, invited there by the Australian Broadcasting Commission, Ives met the Reverend Percy Jones, a professor of music at the University of Melbourne. The two men compiled a book of Australian folk songs and Ives recorded an album, "collected and arranged" by Jones, which were later released in the United States and elsewhere as Australian Folk Songs. (read on)
Burl Ives' Folio of Australian Folk Songs (Sydney, Southern Music Publishing, 1953) 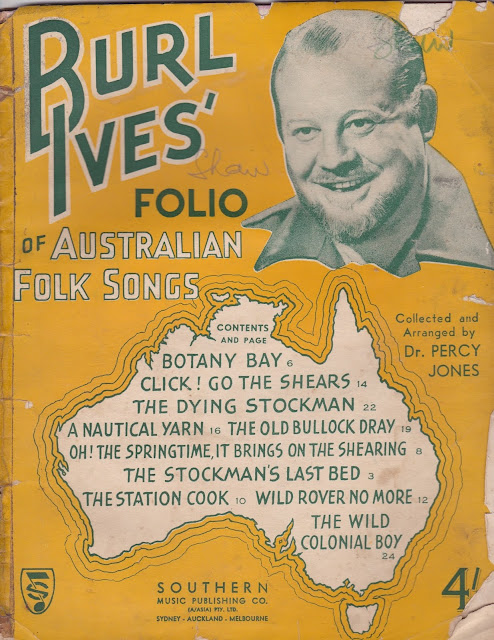 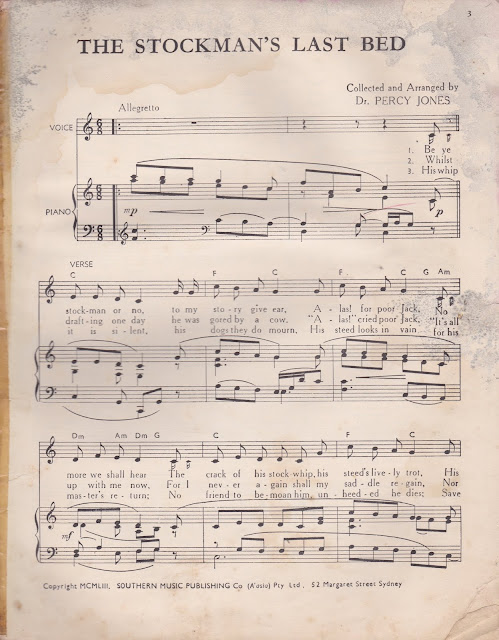 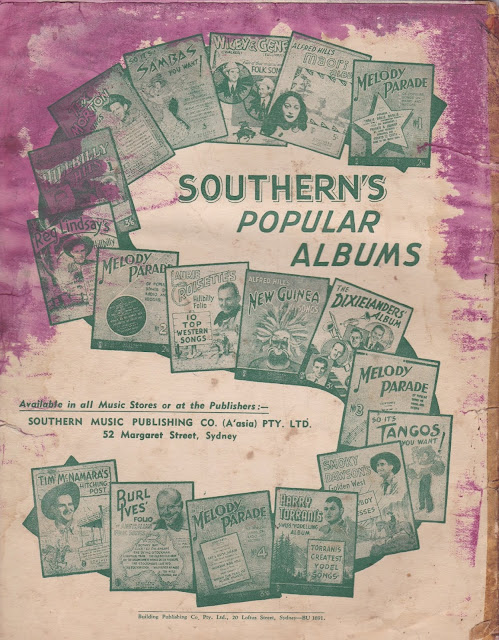 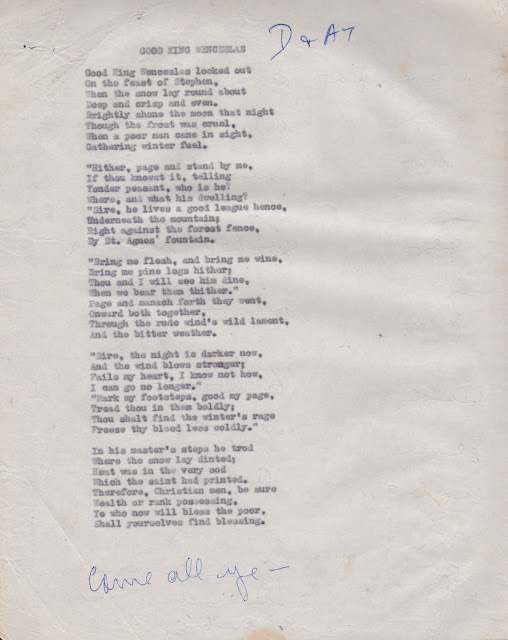 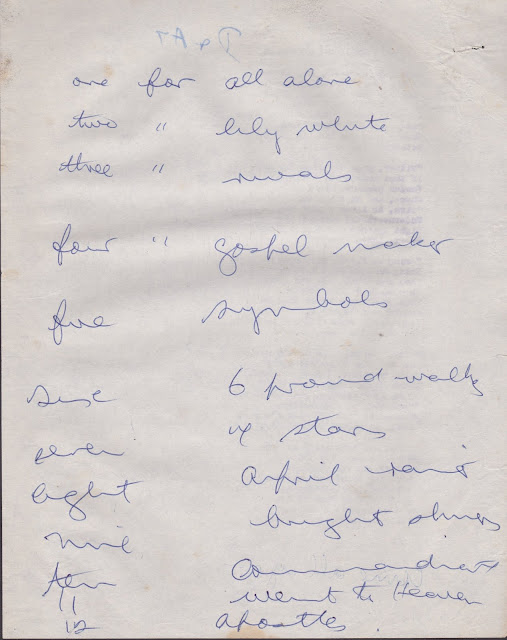 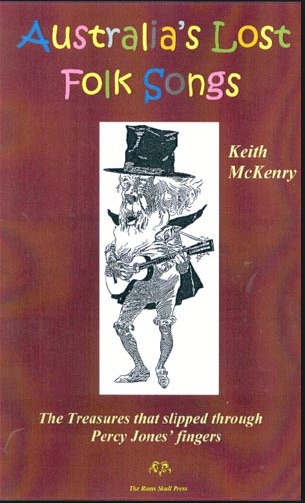 McKenry's aim was to present a range of folk songs that seemed to have slipped under the guard of contemporary Australian folk singers. He used fragments of songs published in the Sun News-Pictorial in 1940, where readers provided verses of songs they had heard or sung themselves. McKenry then sourced many of them putting them in context, detailing the history of each song, each fully referenced with words, music and guitar chords. The book is illustrated by, and dedicated to, the late Ron Edwards. There is a comprehensive bibliography, references used, cross references and annotated remarks. In his introduction, McKenry asserts that many early collectors of Australian folk songs, or bush songs, ignored songs that originated in urban areas.

McKenry also notes that many songs from states other than the 3 main Eastern were not collected either. However in the early 40's an appeal was put in the Sun News-Pictorial for readers to send in Australian folk songs they knew. Unfortunately the requestor did not follow up many of the leads which leads McKenry research to piece together scraps or fragments of songs. As a person who is interested in documenting and archiving Australian music, I welcome this book. It would be of interest to those of you who have an interest in learning new songs or learning about where folk songs originated.
Review by Chris Spencer from Trad & Now.

The cat flew up the chimney,
The doggie tore about,
He jumped inside the cradle
And turned the baby out.
The servant sought protection behind the carving knife
When the old man came home sober
For the first time in his life.

I found the reference in a 1940 issue of the Melbourne Sun newspaper. A Sun columnist was asking readers for old songs from the pioneering and gold rush days, to assist Rev Dr Percy Jones (who was looking for Australian folk songs). The columnist published fragments of 71 submitted songs before passing them on to Jones. Sadly, the papers the journalist gave to Jones have all been destroyed. I have been trying to identify the songs from the published fragments, and then to obtain full texts and tunes for them. Thus far I have positively identified 47 of the songs. When the Old Man Came Home Sober is one of the song fragments.

In 2012 further information was located. On 17th Dec Guest, 999 posted a link to the sheetmusic of When the old man came home sober, by John Cook jr, probably written in the 1880s.