2 previously unpublished songs written by a convict on Norfolk Island


These songs are on Don's CD The Convict Voice, details here
Two previously unpublished songs written by a convict on Norfolk Island and copied into the diary of a constable in 1846.

to the tune of Liverpool Judies (verse only.)
Article copyright Don Brian.

They walked to their mess room, poor creatures they gazed
All seemed in silence and all quite amazed
Wm Westwood broke silence, those words he did say
Let’s go for our pots men, without more delay

Each man manned their weapons the conflict began
And the blood of those tyrants were soon made to run
They called loud for mercy O mercy they cried
No, no, was the answer you have mercy denied

Thirteen in number they died on a tree
And the names I’ll endeavour to tell them to thee
There was Davis and Pendergrass, Cairns the lad
Cavanagh and Pearson, God bless them they’re dead

Brown and Scrimshaw, Maquire as well (Ed. McGuiness)
God bless them I hope in heaven they dwell
Young Whiting and Kenyon you may him well know
I hope that our saviour has called them from woe

There’s Kummusky and Pickthorn they made the thirteen
That ended the last of this tragical scene
Death they feared it not, that bad it come soon
For they knew that their saviour would grant them a boon

Notes:
The song was titled “A song composed by the prisoners at Norfolk Island, relative to the 1st of July 1846”. It comes from the James Stevens Diary Transcript 12 May 1846, p21-22 at the Norfolk Island Museum (NIM 7128), copied by Don Brian in 2016
William Westwood was also known as Jacky Jacky the gentleman bushranger
The hanged convicts were buried in ‘Murderers Mound’ outside the cemetery at Kingston NI.

The Manchineel tree is misidentified. It is a tree known locally as a Melky tree (Excoecaria agallocha). Both were toxic and irritant to touch.
Barrow was an unpopular stipendiary magistrate removed from NI for his own safety just before the Cooking Pot Riot in July 1846
Stevens was constable at NI and became chief constable on drowning of Baldock 1848. 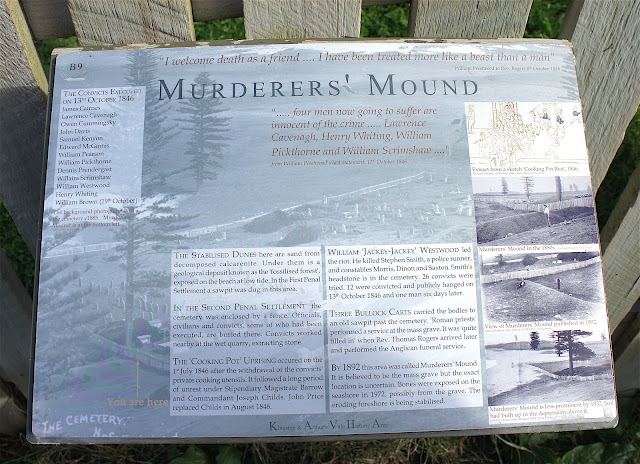 Barrow was a (screw) of low renown
Many is the prisoner he’s cut down
He neither fights for honour nor renown,
He fights for colonial wages

The morning this affray took place
This tyrant wouldn’t show his face
Until the soldiers did arrive
But then this coward crept behind.

As soon as ever Barrow dies
At hell’s gate he will arrive
Come in, come in the devils will all cry
And surround him with blazes.

Says Beelzebub,” How can you tell
That ever a prisoner entered hell
It was for the kettles those men fell
And Heaven shall be their portion