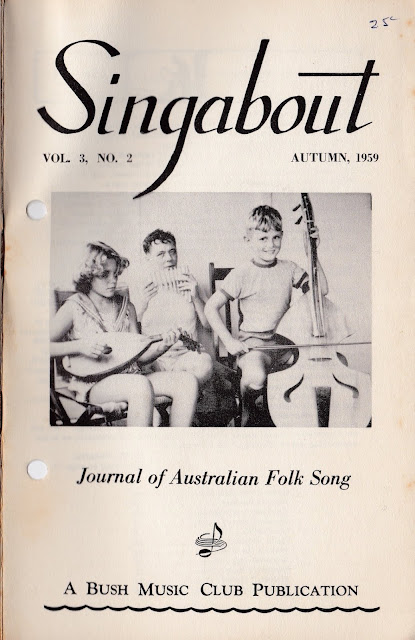 1.  Singabout, Volume 3(2), Autumn 1959 - All home made - three of the Manifolds with puplute, pan-pipes and 4-string bass. The family band also includes a mandora (tenor mandolin) which is likewise home-made 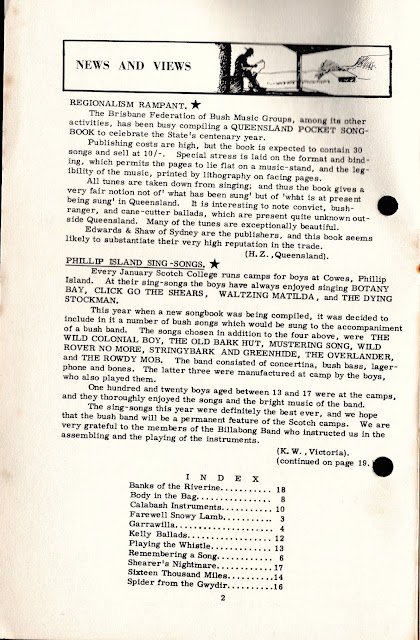 2.  Singabout, Volume 3(2), Autumn 1959  - NEWS AND VIEWS.  REGIONALISM RAMPANT.  The Brisbane Federation of Bush Music Clubs ... Queensland Pocket Songbook to celebrate the State's centenary year ... it is interesting to note convict, bushranger and cane-cutter ballads which are present quite unknown outside Queensland. Many of the tunes are exceptionally beautiful. Edwards and Shaw of Sydney are the publishers ... (H.Z. Queensland)
PHILLIP ISLAND SING-SONGS - Every January Scotch College runs camps for boys at Cowes, Phillip Island ... the boys have always enjoyed singing Botany Bay, Click go the Shears, Waltzing Matilda, and the Dying Stockman ... a new songbook was being compiled it was decided to include in it a number of bush songs which could be sung to the accompaniment of a bush band ... The Wild Colonial Boy, The Old Bark Hut, Mustering Song, Wild Rover No More, Stringybark and Greenhide, The Overlander and The Rowdy Mob. The band consisted of concertina, bush bass, lagerphone and bones. The latter three were manufactured at camp by the boys, who also played them. One hundred and twenty boys aged between 13 and 17 ... thoroughly enjoyed the songs and the bright music of the band.  (The Rowdy Mob  by Charles Thatcher - email from Reg Mundy Victorian Folk Music Club, Sept 20) 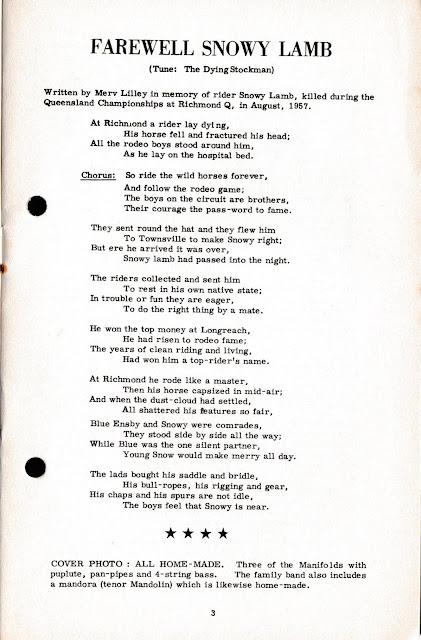 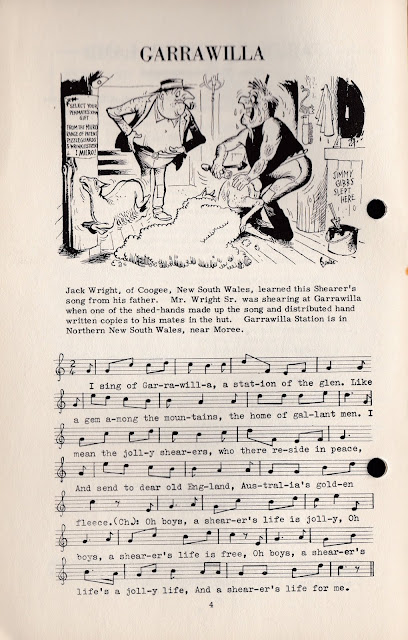 4.  Singabout, Volume 3(2), Autumn 1959  - Garrawilla collected from Jack Wright of Coogee, NSW,  whose father learnt it at Garrawilla from the shed hand who made up the song. 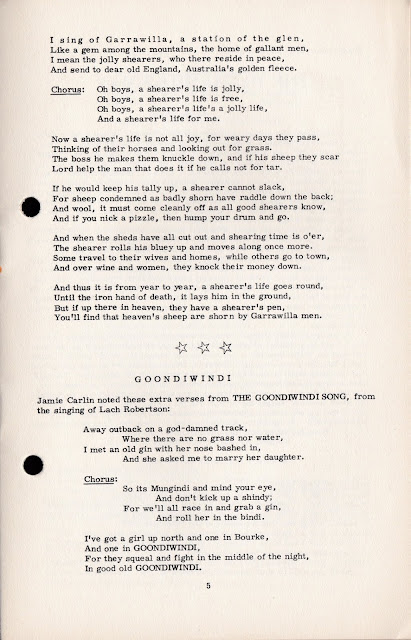 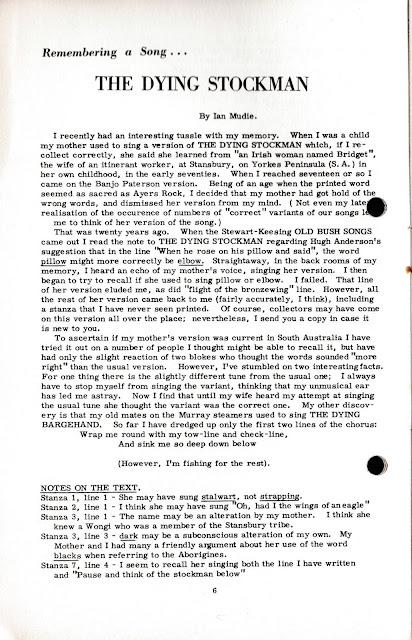 6.  Singabout, Volume 3(2), Autumn 1959 - Remembering a song - The Dying Stockman, by Ian Mudie, a different version to Stewart-Keesing version, learned from his mother who learnt it in the 70s. He includes 2 lines from The Dying Bargehand. 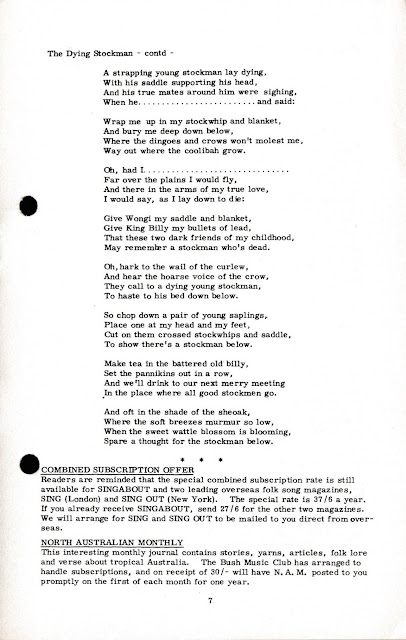 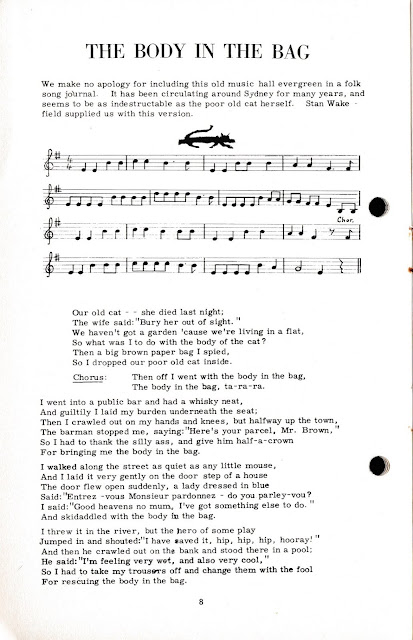 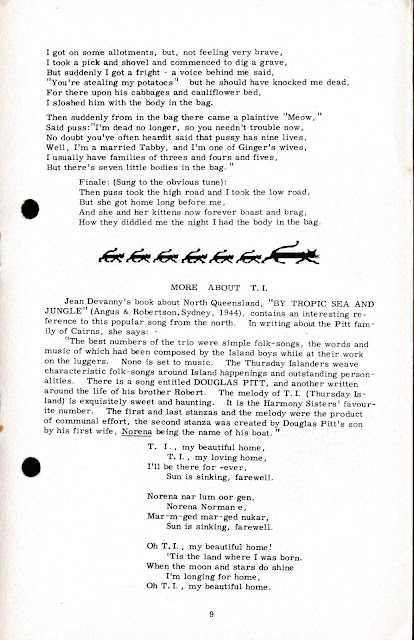 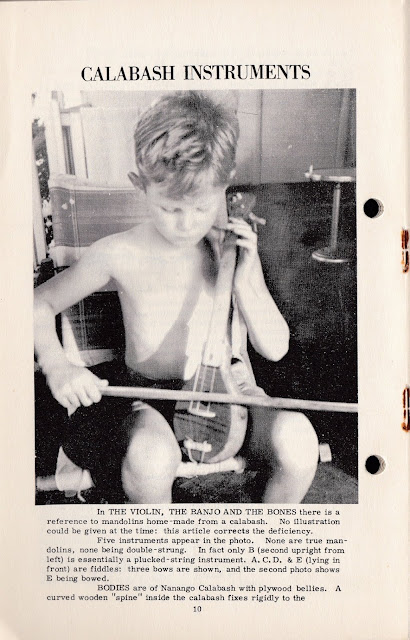 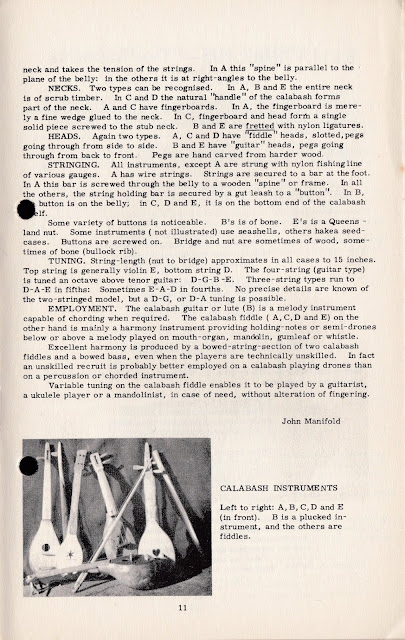 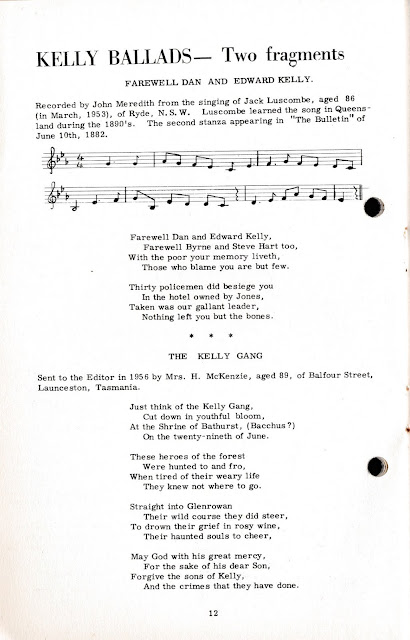 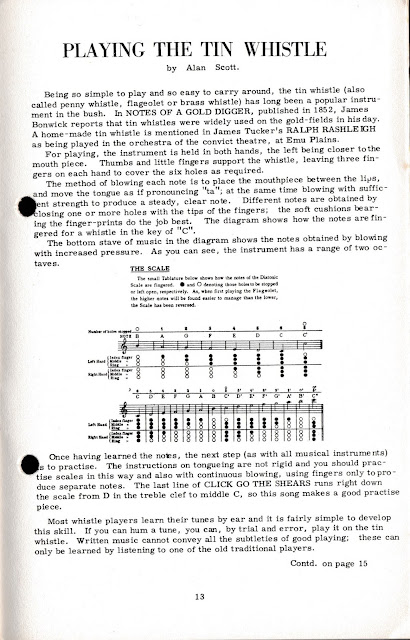 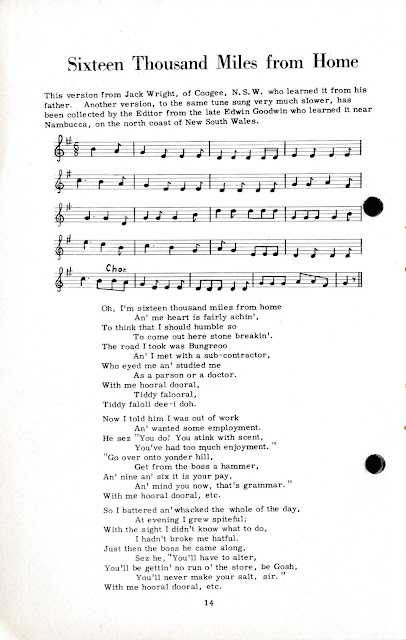 14.  Singabout, Volume 3(2), Autumn 1959  - Sixteen thousand Miles from Home. This version from Jack Wright, of Coogee who learned it from his father. Another version to the same tune sung very much slower, has been collected by the Editor from the late Edwin Goodwin who learned it near Nambucca, on the north coast of New South Wales. 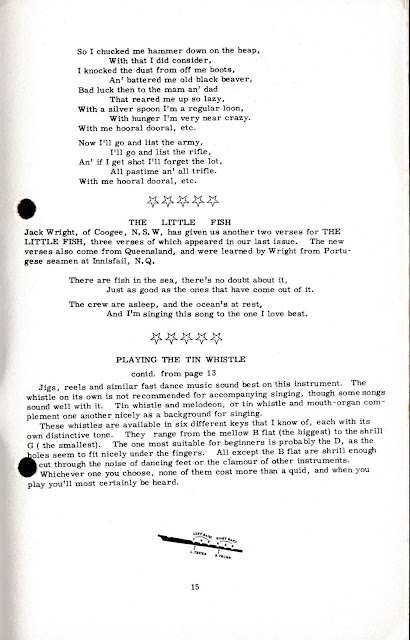 15.  Singabout, Volume 3(2), Autumn 1959 - Sixteen thousand Miles from Home. (cont)  The Little Fish. Jack Wright of Coogee NSW, has given us another two verses for The Little Fish which appeared in our last issue. The new verses come from Queensland and were learned by Jack Wright from Portugese seamen at Innisfail, N.Q. Playing the tin whistle by Allan Scott (cont) 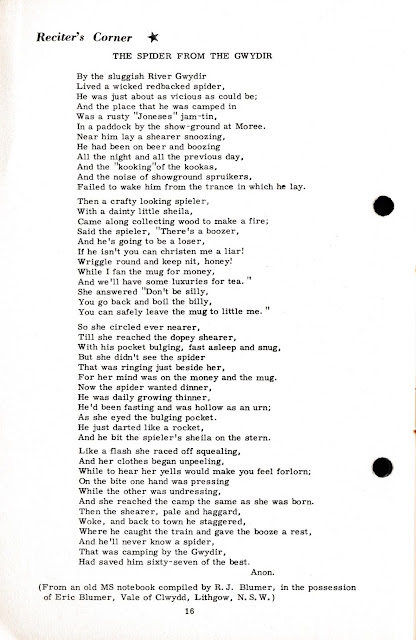 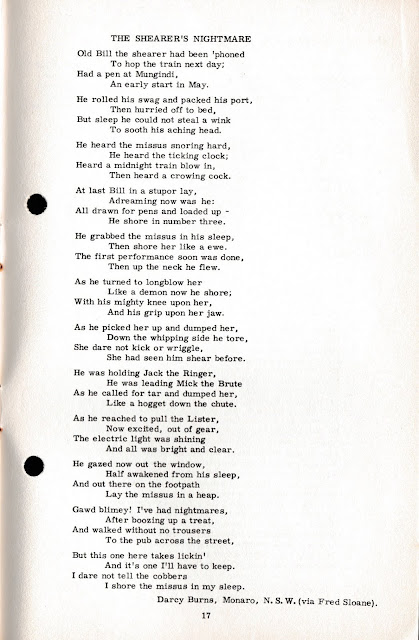 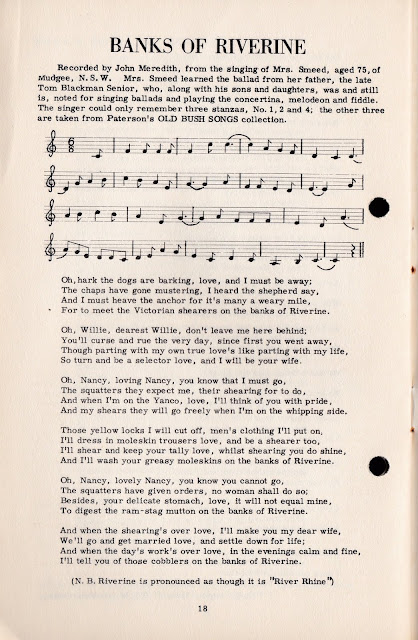 18.  Singabout, Volume 3(2), Autumn 1959  - Banks of Riverine. Recorded by John Meredith from the singing of Mrs. Smeed, aged 75, of Mudgee, NSW.  Mrs Smeed learned the ballad from her father, the late Tom Blackman Senior, who along with his sons and daughters, was and still is, noted for singing ballads and playing the concertina, melodeon and fiddle. The singer could only remember three stanzas. no. 1, 2 and 4; the other three are from Paterson's OLD BUSH SONGS collection.  N.B. Riverine is pronounced as though it is "River Rhine" 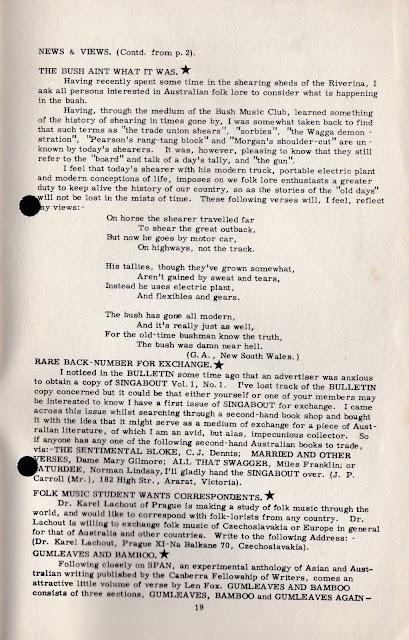 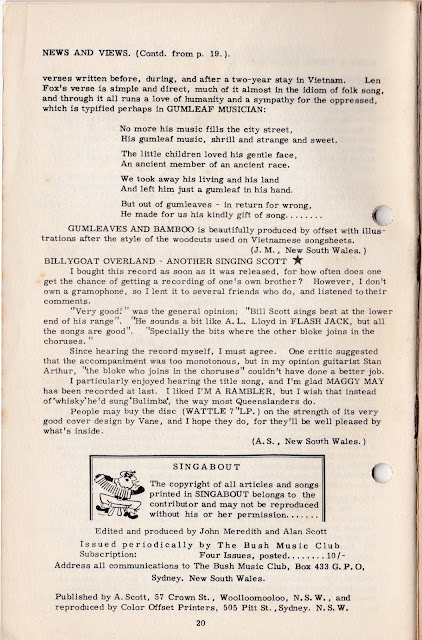