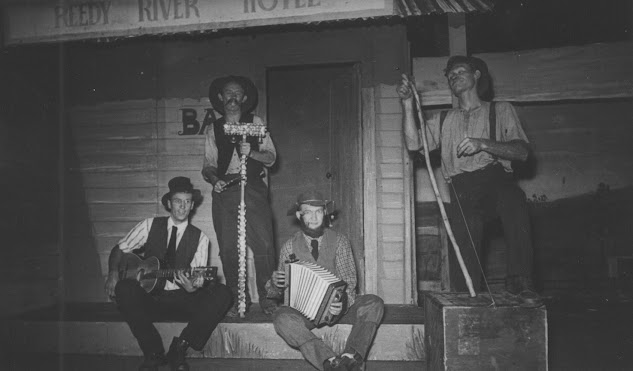 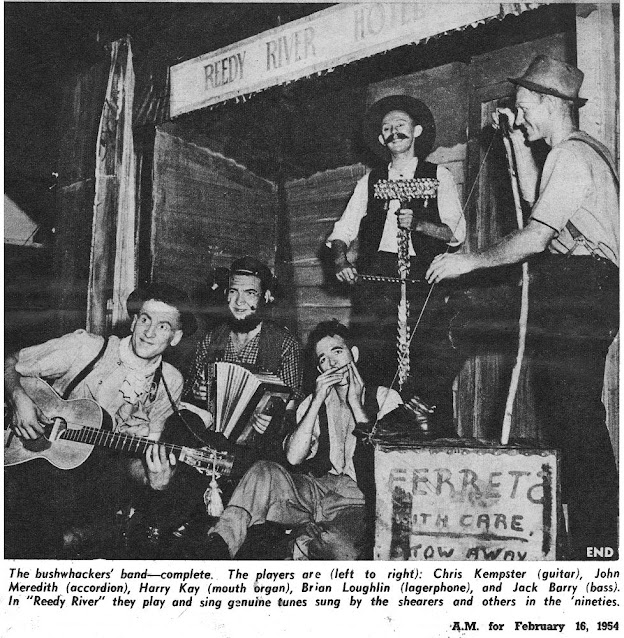 It all started with the formation of The Heathcote Bushwhackers. In June 1953# (sic) a literary and musical evening held at Jack Barrie’s house at Heathcote was to have an “Australian Night” - something unique in those days when our own culture appeared in danger of being engulfed in the flood of second-rate canned American music. Jack, Brian Loughlin and I got together with button accordeon and two of our recent discoveries; a tea chest bass and a lagerphone.

We stuck on false whiskers, dressed rough and gave out with our entire repertoire; Click Go The Shears, Botany Bay and Nine Miles From Gundagai. In spite of my whiskers falling off, or maybe because of them, we were an immediate success - as a comedy act! Chris Kempster joined us after that performance and then Harry Kay.

We were invited to perform our bracket of three numbers at a Tribune concert organised by the Australian Communist Party, at the Hurstville Rivoli Theatre. We were a sensation! The audience shouted, stamped and clapped for more and wouldn’t shut up. And we didn’t know any more. Eventually we went back and did Botany Bay again and invited them to join in on the choruses.
The idea of a group playing traditional instruments and singing Australian songs, straight and not in choral arrangements, was novel and soon we could not cope with the engagements that came rolling in. The following year we supplied the songs and music for four or five historical radio features written for the ABC by Nancy Keesing. We were joined by Alan Scott, Cec Grivas and later by Alec Hood. One day Brian Loughlin told me that someone had suggested that we form some sort of a club and after many bright and not so bright ideas for a name we fixed on The Bush Music Club
.

# note - June 1953 date above - other sources give 1952 for the formation of the Heathcote Bushwhackers - index to Keith McKenry's biography of John Meredith which was created using John Meredith's archives in the National Library, Chris Kempster's recollections, and Ballad of the Heathcote Bushwhackers. Jack's surname was Barrie, but both spellings are used in early sources.

See the newspaper clipping below from Jamie Carlin's collection referring to the celebration of the 2nd birthday of The Bushwhackers on 29th June 1955.
~~~~~~~~~~~~~~~~~
Earliest picture of The Bushwhacker's Band - 1954 May Day procession, Haymarket (outside Paddy's markets & Jamie Carlin was watching - Jamie, Sept 2020)
http://newtheatrehistory.org.au/wiki/index.php/The_1950s_-_Cultural_Imperialism

BMC was formed as part of the Australia-wide search for Australian traditional culture due to the increasing Americanisation of our culture. 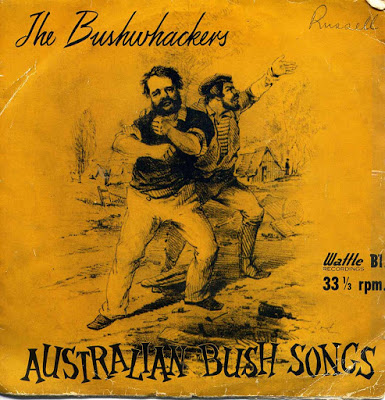 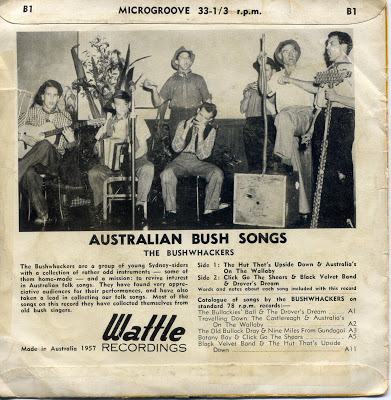 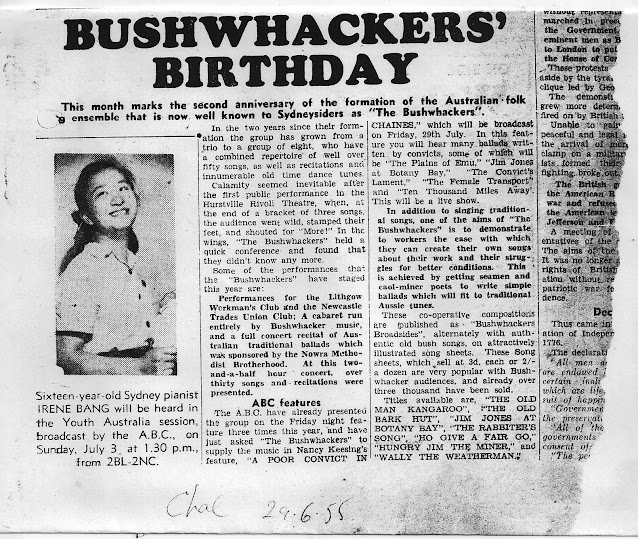 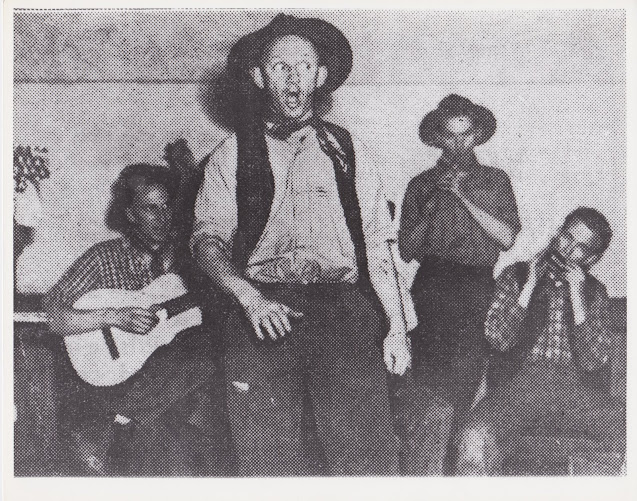 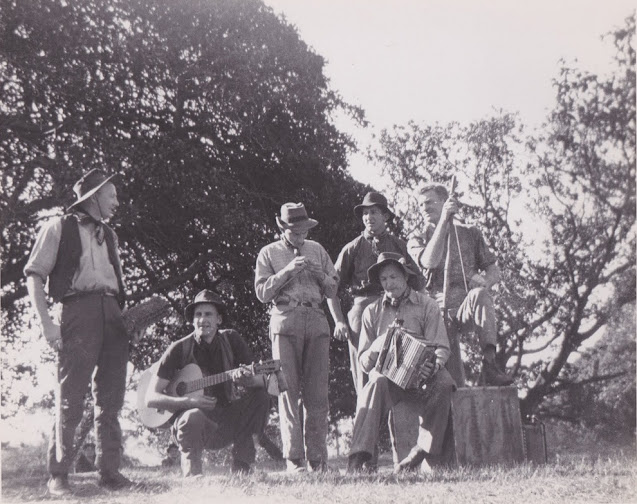 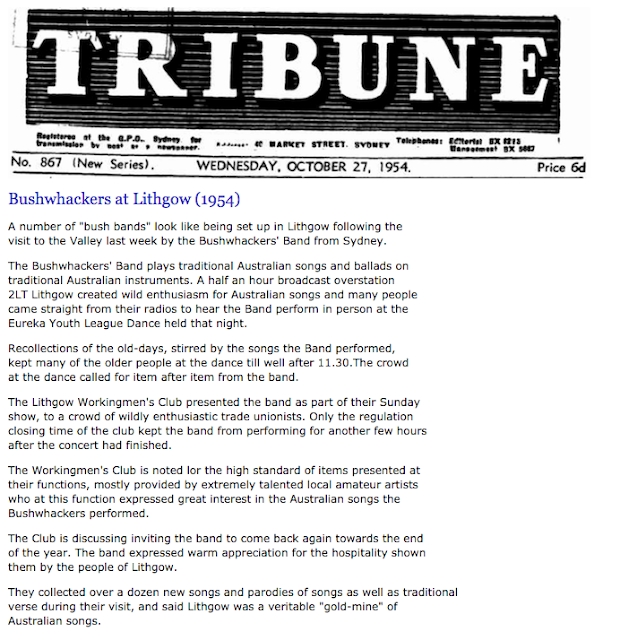 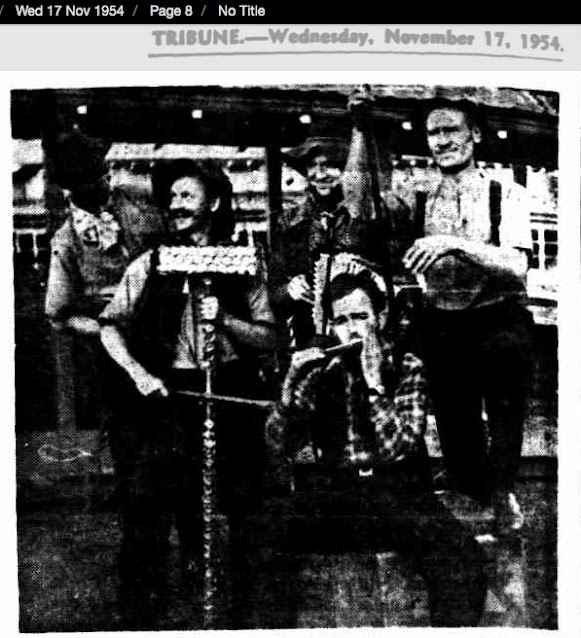 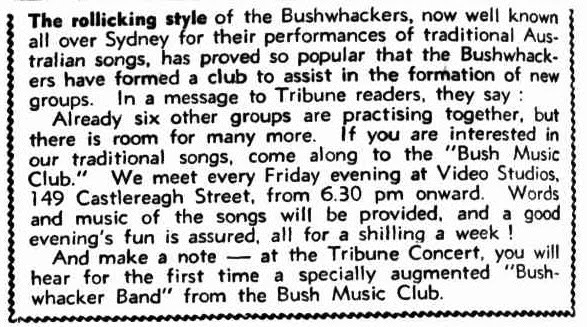 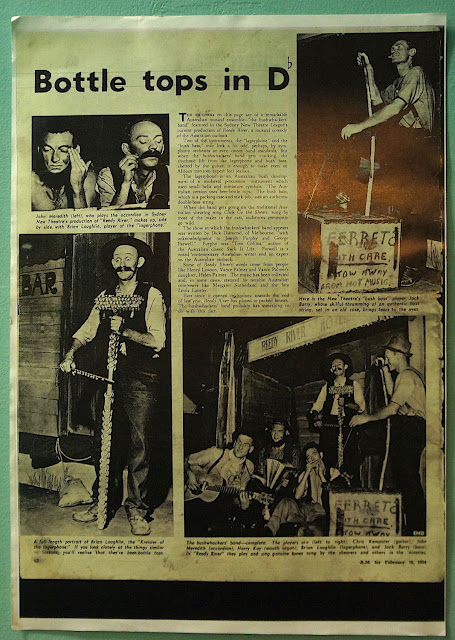 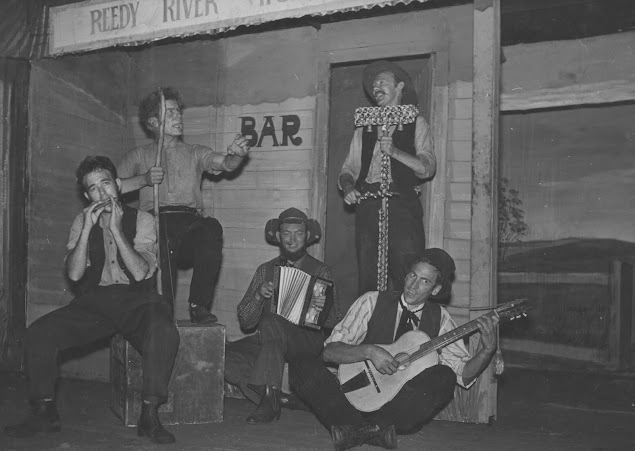 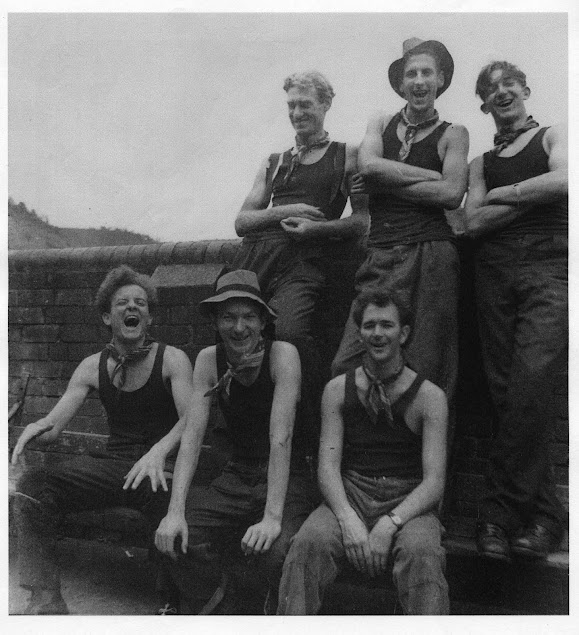 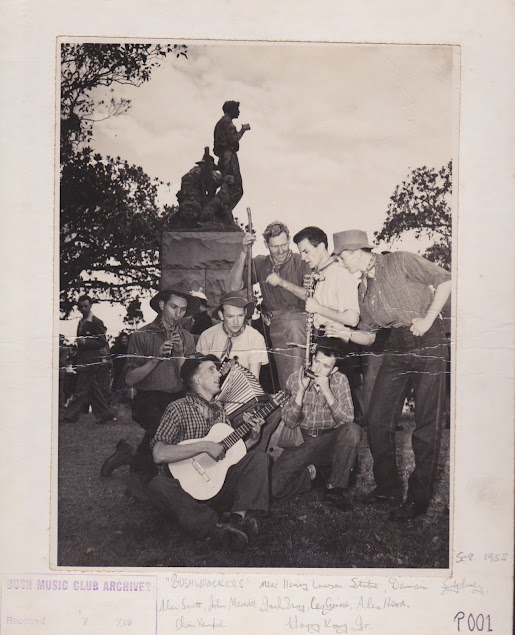 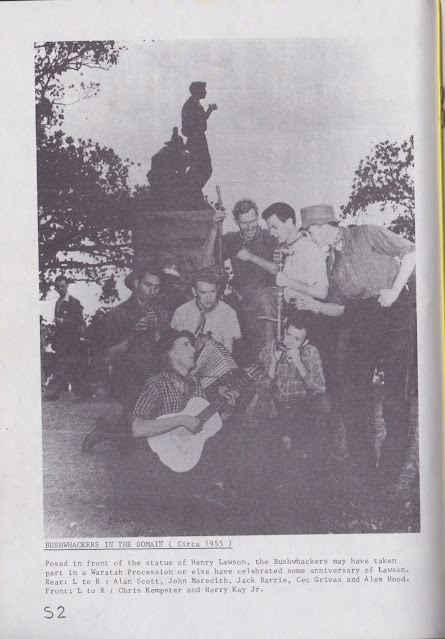 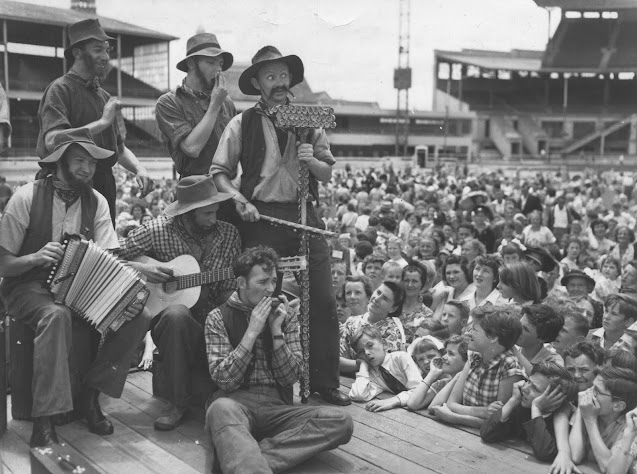 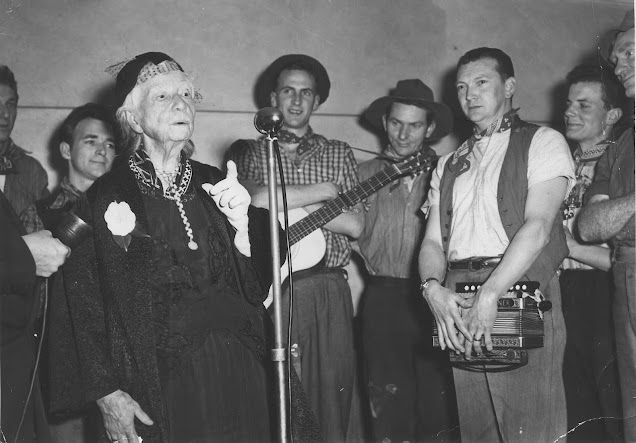 15.  Dame Mary Gilmore with the cast of the 1955 revival of Reedy River on her 90th Birthday (BMC Archives) 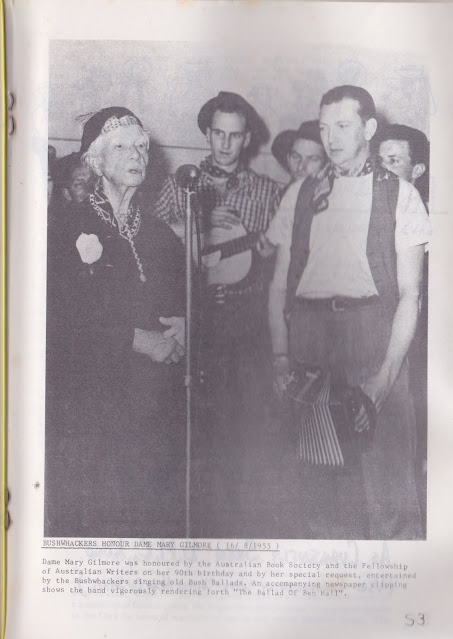 16.  Mulga Wire no.60, April 1987, alas the newspaper clipping referred to has not survived.
In March, 1955, New Theatre revived Reedy River for two weekends ...  Jamie Carlin - The First Ten Years originally published in Singabout Vol 5, No 2, October 1964, pages 12-14.
email from Bob Bolton, 17/9/13  ... and she received some gifts ... and a birthday cake ... in the Manager's Suite of the Rural Bank Building, Martin Place. The Bushwhackers Band are all togged up in their well stage-worn Reedy River costumes ... Merro always reckoned that Mary Gilmore said that their costume was so right that she could even smell the shearing shed ... Merro just reckoned she could small the stage costumes!!! 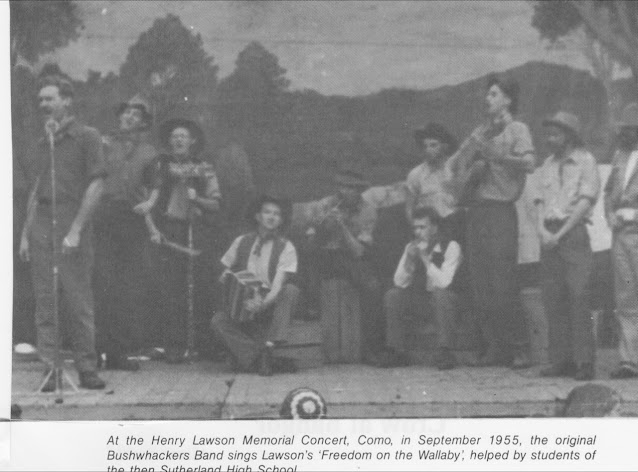 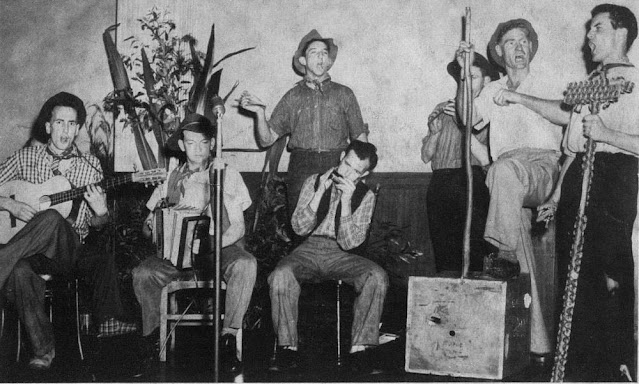 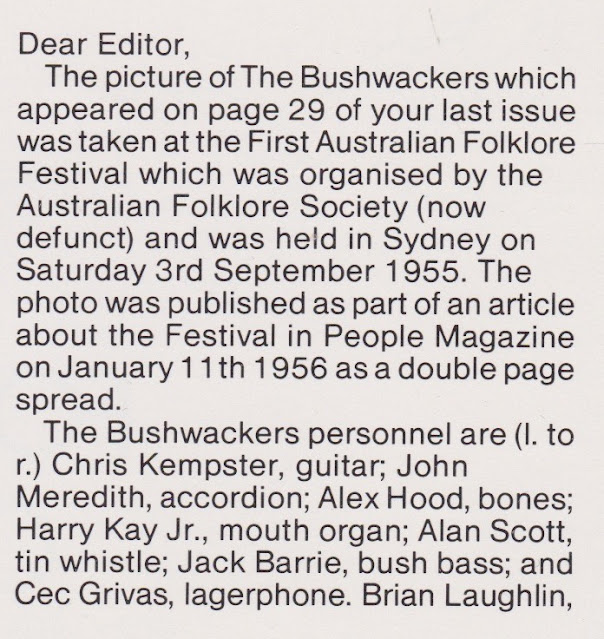 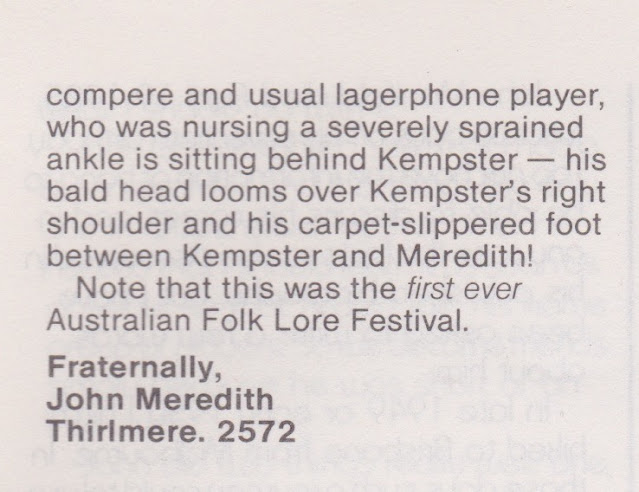 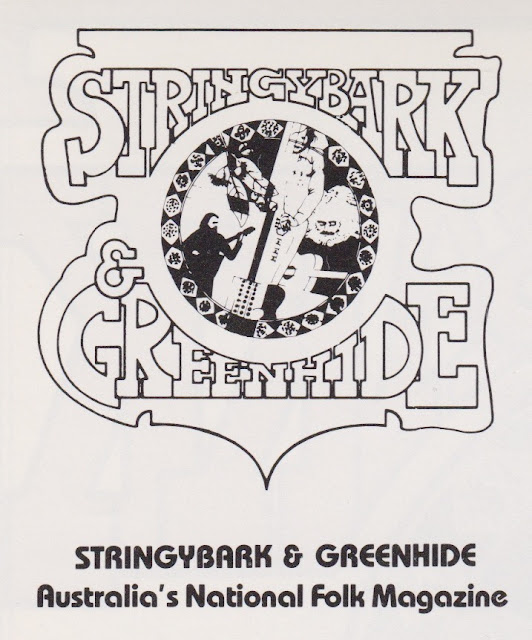 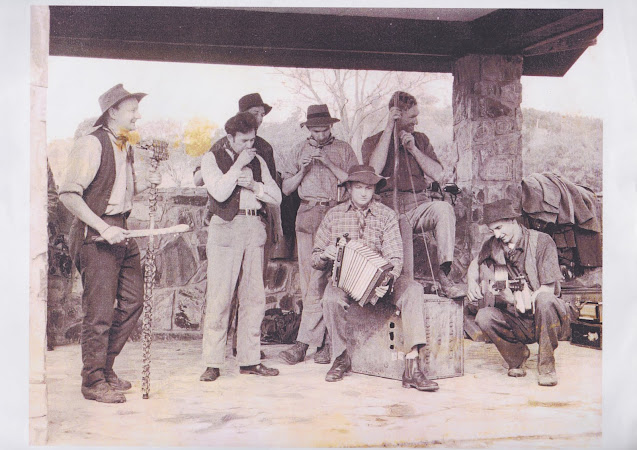 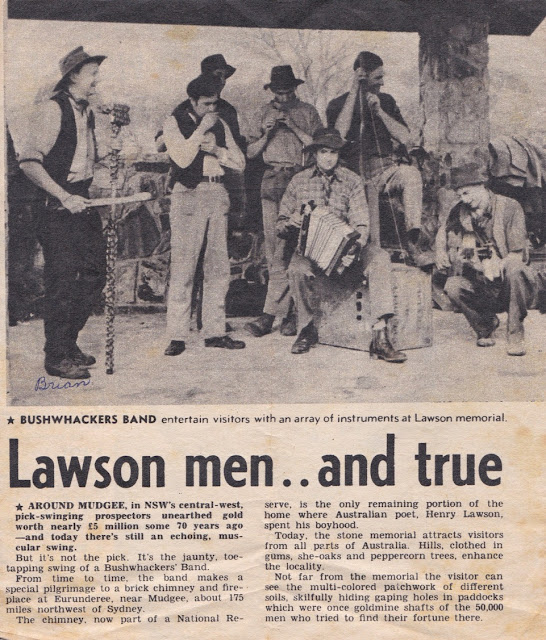 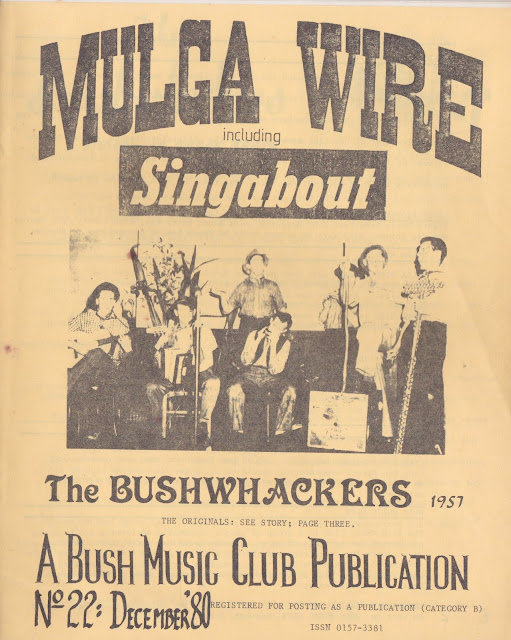