In 1947 my father took me, a child of 12, to see my first play at the New Theatre - then at 167 Castlereagh Street, Sydney. This was a small amateur group performing plays on a repertory basis since 1932, covering a wide range of plays from Shaw to Shakespeare, Cliff Odets to Arthur Miller, topical political revues, parodied versions of Gilbert and Sullivan, plays with a political or social theme or “message”, plays with a working class bias, plays dealing with racism, social justice and peace in the world.

They encouraged and supported Australian playwrights.

In 1952, as a starry-eyed teenager I joined the New Theatre and was keen for any ‘walk-on’ part. Then in 1953, there was a buzz in the theatre. They were going to do a production of REEDY RIVER by Dick Diamond. This had been done earlier in the year by Melbourne New Theatre to great success.

This musical, based around the shearers’ strike of 1891, used Australian folksongs, bush songs and songs composed in the bush tradition and was the right play at the right time. There was an awakening of interest in our past, particularly the rural life of Australian workers, and the songs of the show expressed and captured that life so genuinely. 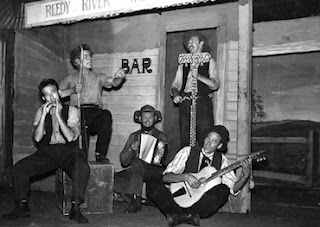 REEDY RIVER required many actors, singers, dancers and a new type of ‘orchestra’. This was supplied by the Bushwhackers Band with it's lagerphone and bush bass. I do not know whether Reedy River made the Bushwhackers Band or the other way around, but I do know that my love of Australian bush songs started with being in that first production of Reedy River. 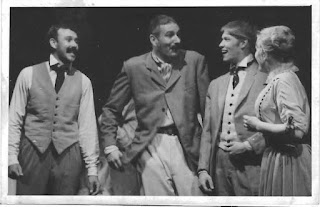 1964 production (Silvia and Tom Salisbury collection)
I was a city/suburban girl from a Celtic/Anglo background singing the English and Irish songs of my parents with no knowledge that there were any ‘Australian’ songs except for the occasional radio broadcasts of songs from the war, such as There’s a brown slouch hat with the sides turned up or The Road to Gundagai etc. So these bush songs from Reedy River grounded my youthful psyche to Australia and not to the strong but nevertheless second-hand, distant culture of my parents. 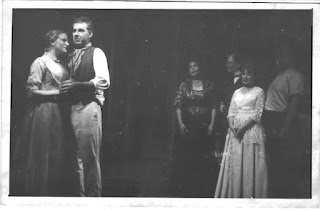 The opening night of Reedy River was abuzz with excitement, not nerves, for we knew we had a success on our hands. The foyer was decorated with the wonderful reproductions of the Holterman photos of the goldfields of the 1870’s whose negatives on glass had recently been discovered. The usual run of a show at New Theatre in those days was 8 - 10 weeks but Reedy River, with its theme and songs, struck such a chord in the people who came to see it, and the strength of ‘word-of-mouth’ publicity, that the season was extended to nine months with changes of cast and extra performances added. Even when the season ended at the New, the cast and crew were kept busy taking the show to school halls and out to suburban areas. I graduated from chorus singer to playing the female lead of Mary opposite Milton Moore’s Joe Collins. 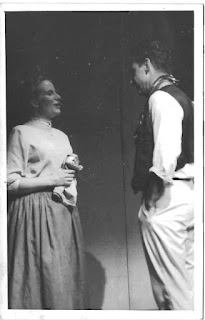 Ten years later I again played Mary opposite Pat Barnett in a new production of Reedy River and I think I brought deeper understanding to the role and the songs as, in the intervening years, my husband and I joined the Bush Music Club and often performed at their Singabout nights.

Here I also worked with Chris Kempster who set the Lawson poem Reedy River to music when he was only 16 and who played the part of Snowy in that 1953/54 production.

It was at the Bush Music Club that I learnt more Australian bush songs and came to appreciate the great work done by John Meredith and Duke Tritton in collecting and saving from oblivion the songs from shearers and drovers. There weren’t many songs from a woman’s point of view, but young men such as Chris Kempster and Mike Leydon were setting the poems of Lawson and other poets to music and John Dengate was writing his own satirical words to traditional tunes and, although not truly ‘bush’ songs, they were great songs and great to sing.

By 1964 I had three children and it was great to be able to bring them to Singabout nights held in the Building Workers’ Industrial Union’s building in George Street, Sydney. I remember hot summer evenings with the upstairs windows open and hoping if I was singing a quiet, sad song that the orange-clad Hari Krishna group would not go banging and jingling their way up George Street on a noisy Saturday night. Those nights of singing and dancing were great. We could take the kids with us (no need to organize baby-sitters) and they could join in the dances with the kindly teenagers and older people helping them to learn the steps and guiding them down the line of dancers.

Arising out of these Singabout nights, one could learn how to become a performer and try out new songs to an understanding audience. Through this experience I teamed up with Chris Kempster and we sang anti-war songs at Save Our Sons rallies during the Vietnam War. We sang at folk clubs, Lawson festivals and peace rallies. One memorable night we performed Australian songs to a huge crowd at the Rushcutters Bay Stadium to visiting Chinese officials (long before China was recognised by our government) where a very youthful David Gulpillil performed an amazing kangaroo dance. We sang at the unfinished Chalwin Castle in Cremorne for Pete Seeger on his first visit to Australia to give him a taste of Australian songs. It was here that a young Jeannie Lewis sang the Queensland version of Waltzing Matilda.

Through my background of Reedy River and the Bush Music Club I was part of a series of short films being made by the film makers of the Waterside Workers’ Federation - Keith Gow, Jock Levy and Norma Disher. Keith Gow was co-director of the 1953/54 production of Reedy River and Norma was the costume maker for both the productions of Reedy River I was in. These short films used Australian songs sung by Alex Hood as a background to the film version of the songs. The films were screened on the ABC as fillers when programmes finished early due to the ABC not having ads. These films were also shown at film festivals. 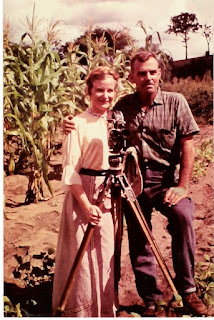 Now in my late 70’s some things have come full circle. With an aging voice, but my love of songs and singing still intact, choral singing suits me perfectly, and with my New Theatre philosophy from my youth of art being used for a wider purpose than just self-expression, I joined the Sydney Trade Union Choir. Who should be there but Paula Bloch, a founding member of the choir and a singer in that 1953/54 Reedy River. And who should be the Musical Director for the choir but Tom Bridges, the son of Doreen Bridges who wrote the music for The Ballad of 1891, one of the most stirring songs from Reedy River. Tom also played the violin in one of the productions of Reedy River. Now our present Musical Director is Margot McLaughlin, the daughter of Cedric McLaughlin who played the swaggie in Reedy River and whose moving singing of My Old Black Billy still rings in my memory. One of the STUC’s favourite songs, Four Strong Women, about four British peace activists, was written by Maurie Mulheron, the nephew of Pat Barnett who played Joe Collins in the 1964 Reedy River with me. 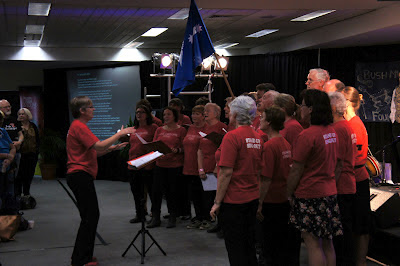 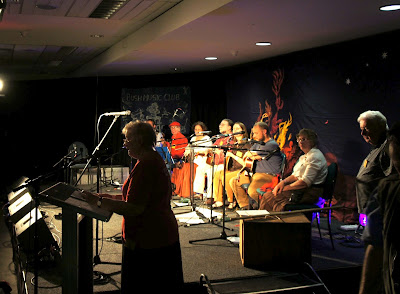 Silvia presenting her memories , 2012 National Folk Festival (photo - Sandra Nixon)
It is not only the times spent in Reedy River and the learning and performing songs for the Bush Music Club’s Singabouts that one remembers but the almost 60 years of pleasure and purpose which sprang out of that twin birth of New Theatre’s Reedy River and the Bush Music Club and for this I owe them my heartfelt thanks, my well-being and my best wishes for the future of both of them.