Dave Johnson spoke about the influence Jamie had on him in his early days at BMC & read the following which was originally published in Singabout Vol 5, No 2, October 1964, pages 12-14.


The following is a collection of reminiscences culled from memory and diaries, volumes 1955 and later. As my activities over the years have always been linked with musical and vocal performances, the Concert Parties and other entertainment groups figure prominently.

1954 --- Reedy River produced by New Theatre was still playing to packed houses every week end - starring the Bushwhackers' Band led by John Meredith. My father had taken me to see Reedy River in February as a 17th birthday treat and I cannot recollect having ever been so impressed by rollicking music. The results were understandable: within a week I knew every song by heart -- it seemed as if folk music had always been around me and that I had just discovered it. That first impression must have been good - it is still with me.
In conjunction with a few friends, we began practising songs and instrumental arrangements. I had built a lagerphone and with mouth organ and tenor and treble recorders, practised various bush ballads. 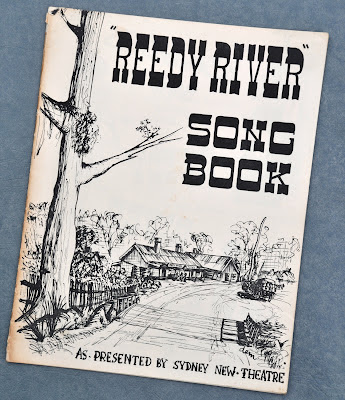 In Lewisham, Ken Hansen's group, the West Sydney Singers, were singing folk songs in 4, 6 and 8 part arrangements, and I soon became part of this group, singing songs from Vol. 1 of Bandicoot Ballads.

The newly formed BUSH MUSIC CLUB met on Friday nights at the Video Studios, Castlereagh Street, and although I have not recorded my first visit, it was quite close to the foundation. The small group at Granville were regularly practising - COBB & CO., DENNIS O'REILLY, THE OLD BARK HUT, CLICK GO THE SHEARS. The personnel were Max McDermott, Jamie Carlin, Bill Berry and Dick Fitzgerald, musical accompaniment as mentioned above. This group dissolved eventually, and I became a more regular attender of the B.M.C. meetings. 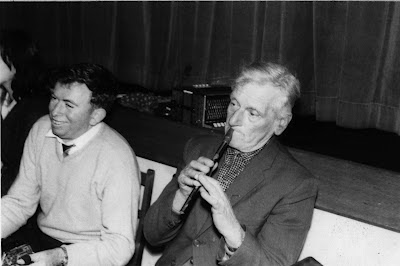 In March, 1955, New Theatre revived Reedy River for two week ends, and I took part in my first theatrical performance. It was the intention of the B.M.C. to encourage the formation of small bands in various suburbs, capable of doing work similar to that of the Bushwhackers' Band. However, these small groups did not last very long, and eventually broke apart; some members joined the B.M.C.

The Australian Folklore Society was functioning strongly at this time (Secretary, John Meredith). A monthly meeting was held on a Saturday afternoon at the Y.M.C.A., where tapes and records were played and notes and discussions exchanged. It was at these meetings that I first met Duke Tritton, Joe Cashmere and Sally Sloane. Meetings were normally followed by a party at one of the members' homes.

On 30th March, '55, three B.M.C. members, Alan Scott, Jamie Carlin and Patricia Burke, attended a social at Sutherland School of Arts. This is probably the first attendance of a group on behalf of the B.M.C. other than the Bushwhackers, who were a separate organization.

Following this event, the group met for practise at Joy and Claude Durst's home in North Sydney, and later at the home of Madge and Harry Glendenning. A film night was held at the Video Studios, 3rd June, to see Captain Thunderbolt, a film about the bushranger and featuring a composed N.C.B. tune. Several weeks later, 24th June, an A.B.C. Broadcast consisted of Songs of the Shearers, by Nancy Keesing, starring the Bushwhackers.
The B.M.C. were currently singing SOUTH AUSTRALIA, THE RABBITER, GIVE A FAIR GO, ANDY, THE DROVER'S DREAM, THE LITTLE SPARROW, WALLY THE WEATHERMAN and other songs from the Bushwhacker Broadsides.

On Friday 8th July, it was suggested that a magazine could be a desirable feature of the B.M.C. and that a party similar to those of the Folk Lore Society could be held.

The group from the B.M.C. (who later adopted the name of Rouseabouts), performed at several functions, a House party at St. Kilda Flats, at the Barnardo Homes, Normanhurst, etc. Nancy Keesing had written a new script, A Poor Convict in Chains for the A.B.C., and this was broadcast, starring the Bushwhackers, on 29th July, 1955.

On Sept. 3rd the first Australian Folk Lore Festival was held at Federation House, organized by the F.L.S. This event was a resounding success with a programme of traditional and local singers. The event received a lot of favourable publicity in the newspapers, particularly in the "People" magazine, which devoted several pages to the spread. 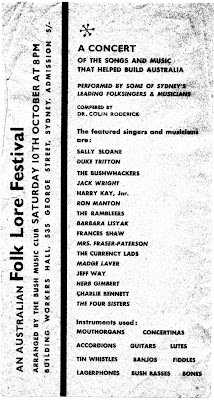 The day following the Folk Lore Festival was the pilgrimage to the Henry Lawson statue in the Sydney Domain, where the B.M.C. performed and were eagerly photographed by the newspapers. 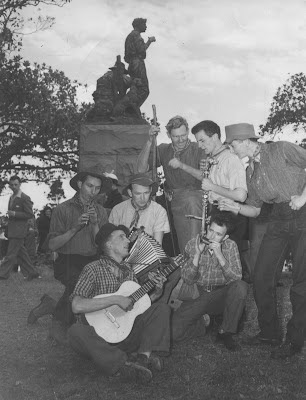 In Sept. '55 it was decided to regularise club proceedings, and membership was defined at 5/- per year.

The open air concert at Como, which was to become an annual event was first held on Sunday 18th Sept. '55, at this function the Bushwhackers' Band performed, together with items from the children at the local high school.

The "concert group" from the B.M.C., now known as the Rouseabouts, performed at various functions round Sydney.

On 11th November a "Ned Kelly Night" was held to commemorate the 75th anniversary of the death of Ned Kelly. 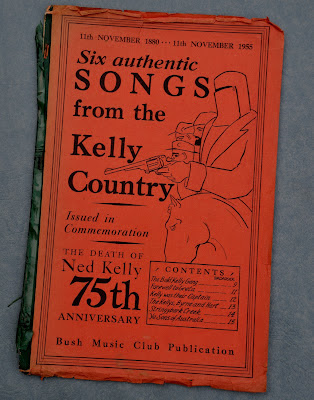 On Sat. 26th Nov. a function called Singabout was held. As far as I can determine, this is the first occasion that this name was used.

7th January, 1956 was the 2nd birthday party of the Folk Lore Society, and the cake with two candles was piped around the hall of the Carlton School of Arts to the tune of THE BALL OF KERRYMUIR, played on recorder and mouth organ.

The B.M.C. decided to hold a mystery picnic, 22nd January, destination unknown, a bus was hired and a load of people were taken to Garrie Beach.

On 6th February, there was an election of officers, and I was elected librarian.

On 11th February, the first Conference and a Singabout Night were held. This was approximately the same date as the appearance of the first Singabout magazine. 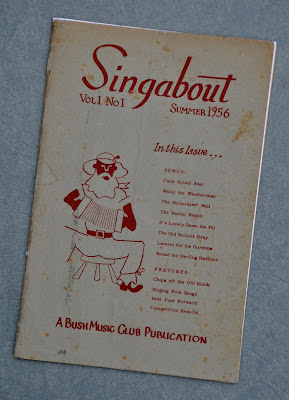