Memories of early days at the Bush Music Club by R. Dale Dengate

As a keen bush walker in the early 1960s, I found the Bush Music Club’s Singabout Songsters in Youth Hostels and met a couple of Club members. They invited me along to their meetings which were held on Tuesday evenings near Wynyard station. The format was similar to Methodist fellowship meetings where you sat around and sang songs. A welcome difference was that at the BMC meetings, we had portraits of well-known Australian writers, such as Henry Lawson and Mary Gilmore, looking down on us as we sang, danced or played. 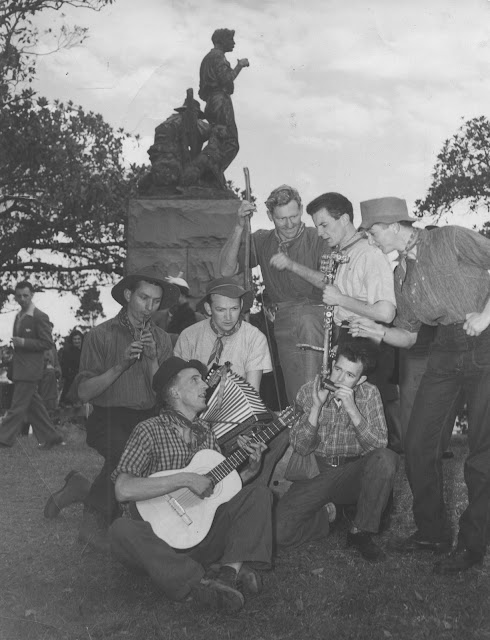 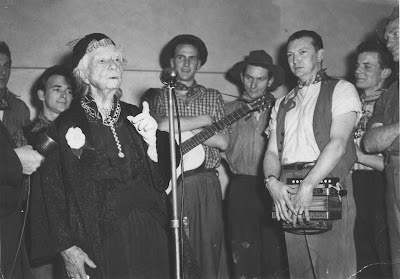 There were many keen, nimble dancers, often led by Noreen Grunseit and John Meredith.  Most of the musicians were older men who played concertinas and accordions, except for Frank Maher and Jamie Carlin who were closer to my generation. Frank played the bones, and Jamie played the concertina by ear and didn’t need sheet music, which I found amazing. Concert party, 1957   (BMC archives)
In 1961, I encouraged another young teacher from my school, to accompany me to the Club. He was John Dengate, who was learning to play the guitar, and had already written lots of songs about his experiences in Menindee and in the National Service. Alan Scott, Merro and others, encouraged John to bring along a new song every week and to use traditional tunes. (John continues to this day to trace the political history of Australia as an unapologetic supporter of the worker and the union movement, and as a commentator on the follies of our political leaders.)
Alex Bowker and John Dengate, Singabout 6(1), 1966 (BMC Archives)
We often went away with the concert party to places in the bush like Gulgong, Carcoar and Tuena, playing and singing on street corners or on the back of trucks. Everything was much more ‘make do’ and I used to wear a long skirt which was really a curtain. 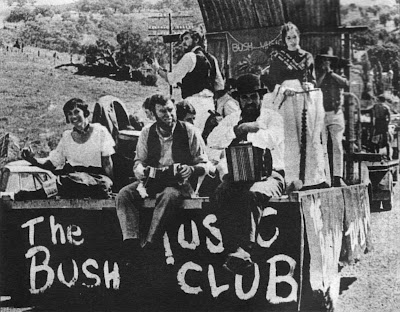 BMC at Trunkey Creek Festival.
On the back of the truck from left to right are: Dale Dengate playing bones, Jamie Carlin on concertina with bandaged wrist[ a story to be told], Brian Haylett on accordion, Eric Bolton standing and covering most of John Dengate behind him, Elaine Wood on largerphone with ribbon across her bosom, probably for best float, and Noel Ricketts on mouth organ. Every time we hit a pot hole in the dirt road, we all nearly fell off the truck; it was as rough as the sign on the back of the truck, but it was great fun.  (Dale and John Dengate Collection)

Members busking at Gulgong, 1969.
Jamie Carlin, Ronda Carlin holding the lagerphone, Dale Dengate wearing
glasses seated on step (Dale and John Dengate Collection)
I especially recall Pam and Brian Loughlin, Brian was a very lively fellow who played the bones and largerphone in Reedy River in 1954 – he was a great showman on the bones. Brian worked in the printing trade and told hilarious stories of the boss, Frank Packer, who used to chiack him about his work for the Communist Party and the Union. Brian and Pam brought up a large family in a small worker’s cottage in Rozelle.
Frank  Maher, Sam Ramsay, Alan Scott & Jamie Carlin (BMC Archives)
There was an occasion when Brian was being bundled into the back of a paddy wagon after a Peace March. Although Pam was eight-months pregnant, she chased the wagon, pounding on it shouting: “You can’t take him away! He has to come home to look after the children or I’ll bring them all down to the cop shop.”

After the first National Folk Festival in Sydney (The Port Jackson Festival, 1972), John and I had a number of folk from Melbourne staying with us at our home in Glebe. They all went to a production of Reedy River at the New Theatre on the Sunday evening and when they came home, I was kept busy making pots of tea. Those were the days when all the pubs closed on Sundays, so there was no grog. But the old lady next door felt the singing, music and laughter around midnight, was too noisy, so she called the police. It was probably Brian who was playing the bones while being upside down on our lounge who had us all laughing that caused the late-night ruckus. However, when the police arrived, they were apologetic as they said they couldn’t hear any noise from the street, but knocked because it was the only house with a light on. They declined a cup of tea and went away. Glebe in those days was known as a very rough suburb and the folkies from Melbourne were thrilled, as they knew they could dine out on the story of being in a house, in Glebe, drinking cups of tea when it was raided by police and probably ASIO! 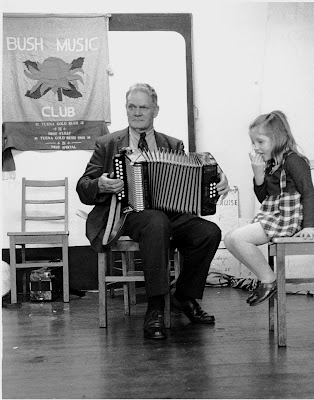 Pam and Brian were keen dancers, so we were all saddened when Brian had an asthma attack at the bush dance celebrating the end of the Vietnam war. He died on the way to the hospital. Indeed as one looks back over the early decades of the Bush Music Club, one recalls larger-than-life characters - some who are no longer with us - with a range of mixed emotions. 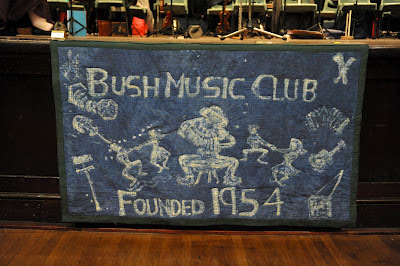