The Bush Music Club was founded in October 1954 & published the first issue of Singabout in January 1956. This issue included notice of BMC's First Annual Conference on Saturday 11th February at the International Seaman's Club.

The final issue published was Vol. 6, no. 2, 1967. Issue 6(3) was prepared but never printed and BMC then relied on newsletter-style publications until Mulga Wire started in 1977. 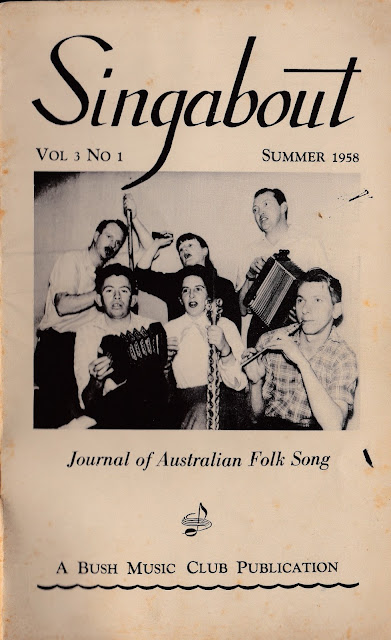 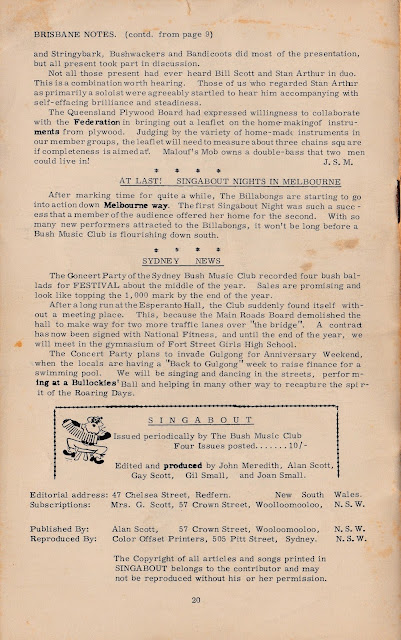 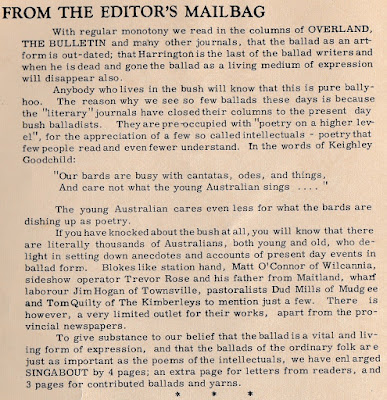 Malone's Cockatoo - from the collection of Matt O'Connor, Wilcannia, NSW

Old T.I. - one verse of a  variation learnt from native military during the war by Merv Lilley.

How would you be? 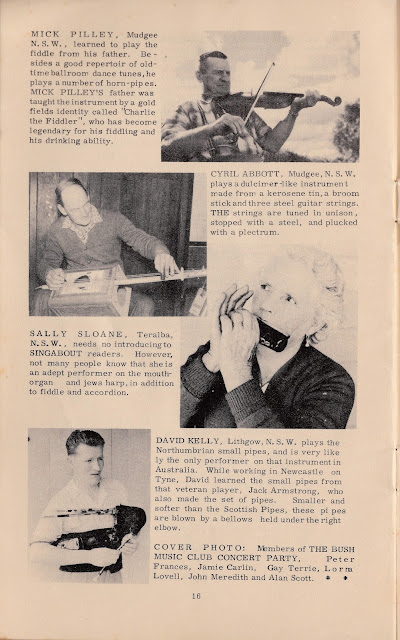 Cover - All home made. Three of the Manifolds with puplute, pan-pipes and 4-string bass. The family band also includes a mandora (tenor Mandolin) which is likewise home-made. 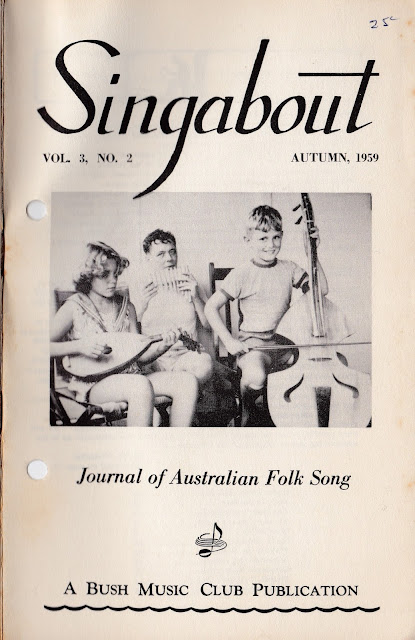 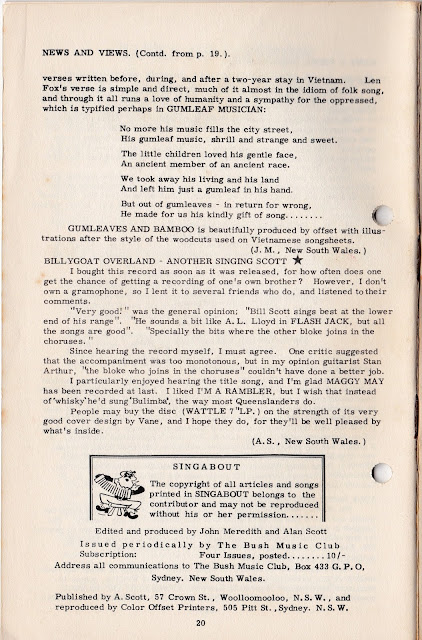 Garrawilla - written by a shed-hand at Garrawilla station, collected from Jack Wright, who learnt it from his father.

The Dying Stockman - contributed by Ian Mudie who learnt it from his mother, who had learnt it in the seventies.

2 fragments of Kelly Ballads - the first collected by John Meredith from 86 year old Jack Luscombe in March 1953, the other sent to the editor in 1956 by Mrs H. McKenzie, aged 89 of Launceston, Tas.

Sixteen Thousand Miles from Home - collected from Jack Wright of Coogee who learnt it from his father.

The Spider from the Gwydir

The Bush Ain't What it Was - contributed by G.A, NSW 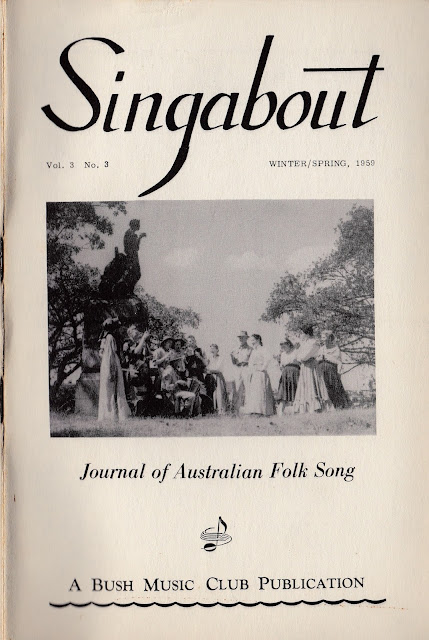 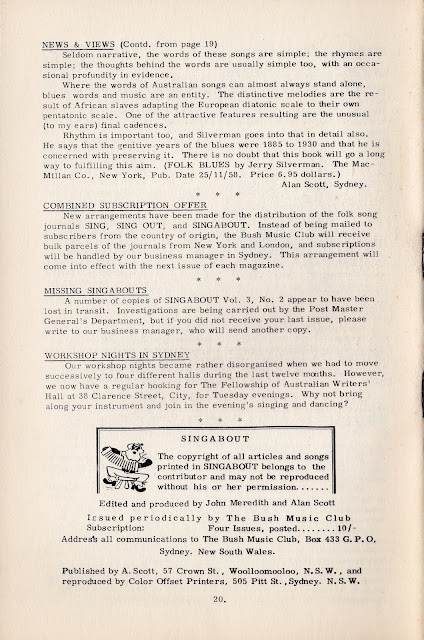 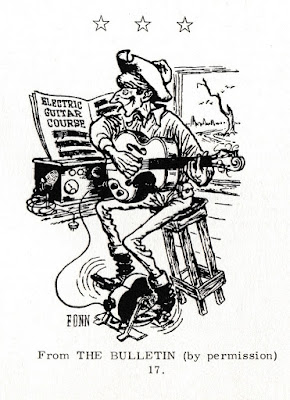 The Wild Colonial Boy - supplied by Mr Theo Archdeacon, WA who learnt it at school in Western Australia in the middle 80s when it was new.

Charlie Mopps - the theme-song of the Bush Music Club, collected by Redd Sullivan from the Chief Refrigeration engineer on the ss Tekoa in 1953 & localised with Sydney pubs. 2nd verse written by BMC member Peter Francis.

Shickered as He Could Be - collected from a fisherman on Lake Macquarie with additional verses remembered by members.

A Battle of Wits by Matt O'Connor, Milparinka, NSW 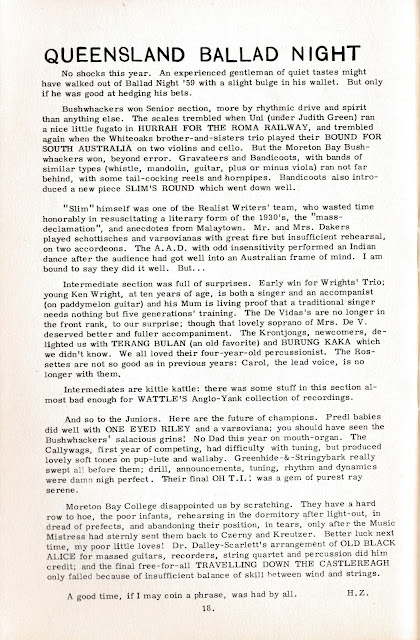 Aboriginal Songs by Roland Robinson. Reprinted by kind permission from The Bulletin.

Cover - This jolly crowd of performers are members of the Billabong Band from Melbourne, founders of the Victorian Bush Music Club.


In August an offer by the Sydney Bush Music Club to a ten percent share in their “Singabout” magazine was accepted. An example of the Club’s contribution to this magazine can be seen in “Singabout” Vol. 3, No. 4, which included the words, music, notes and drawing for the “Dying Shearer”, and an article by Frank Nickels. 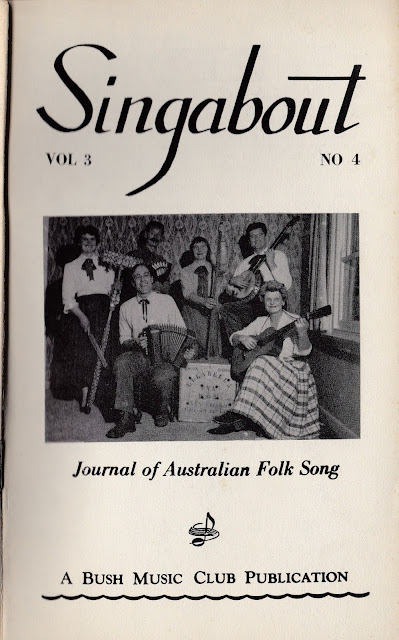 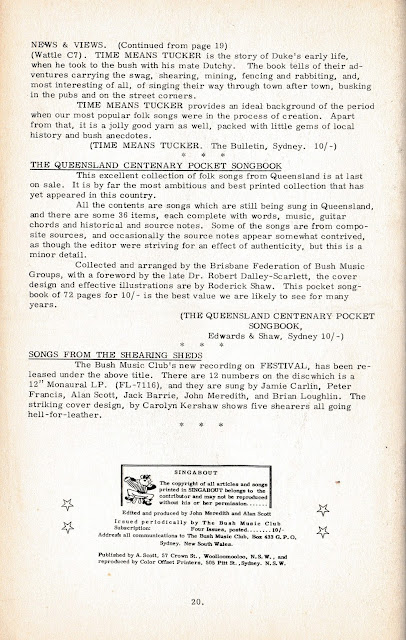 The Bream of Anson's Bay by Clarence Strochnetter, Tas,  music by Stan Wakefield

The Maiden's Prayer - collected from "Cat" McCann in Gulgong, NSW