Chris is another long term member & appeared in the John Dengate memorial concert where he sang  Terrorist Song and Song of childhood. 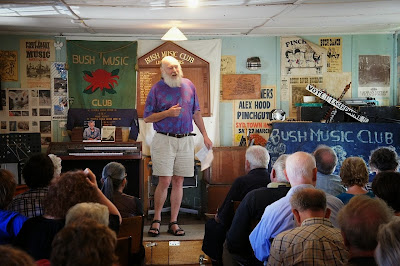 from Margaret Walters -
He went to concerts, festivals and sessions for years, quietly enjoying the music, never putting himself forward unless it was to help arrange or pack up the chairs. And then, one day, there's a gap in proceedings and out he comes with a traditional song you haven't heard for yonks, and he knows it thoroughly, needs no prompting. Jaws drop and you think "What a good voice!, and has he known songs like that all the time? Why didn't he tell us!" That's Chris Maltby for you. 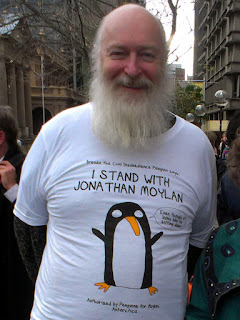 Of course, in no time, he was courted by the Ecopella Choir (he was Green!) and the Roaring Forties (he had a beard!) and both groups continue to be amazed at the number of songs he already knows and the speed with which he can learn new and quite difficult material. 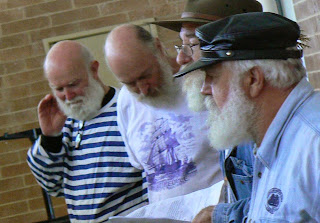 Chris had a grandfather who ran away to sea at 14 - hence his fascination with nautical songs; he grew up in a household that loved classical literature - so Kipling and other poets were kindergarten fodder; and the family were keen bushwalkers - the genesis of Chris's Green political convictions. Blessed with a sharp intellect, humanist ideals, a range of practical skills, a great sense of humour, and a supportive life partner in Prue, Chris is an all round good guy. Oh yes, he can sing, and you can be sure that the material he chooses will enrich your life!