earlier article on this issue
http://bushmusicclub.blogspot.com.au/2013/04/singabout-vol-1-no-1-february-1956.html

The Bush Music Club was founded in October 1954 & published the first issue of Singabout in first week in January 1956. This issue included notice of BMC's First Annual Conference on Saturday 11th February at the International Seaman's Club.

Volume 6 no. 3 was prepared but never printed and BMC then relied on the Newsletter until Mulga Wire started in 1977.

My copy belonged to a newcomer to BMC - J A Forbes? - who noted the meeting details on the cover (Trades Hall, Room 34A @ 8 o'clock)

According to a musician, he was also learning the concertina as the notation on the back cover shows.

Thanks to early member Frank Maher for allowing issues 2, 3 & 4 to be borrowed & scanned. 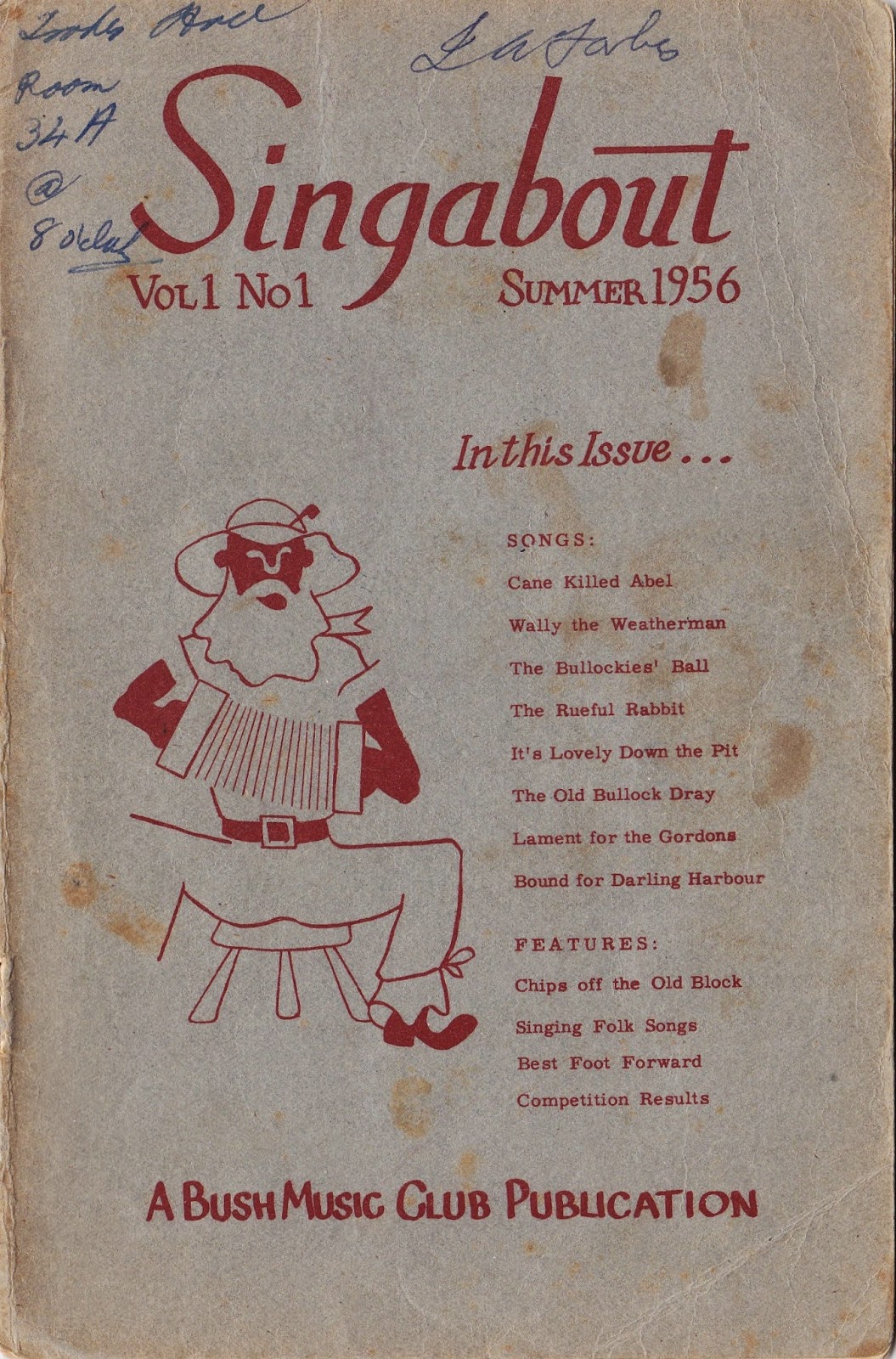 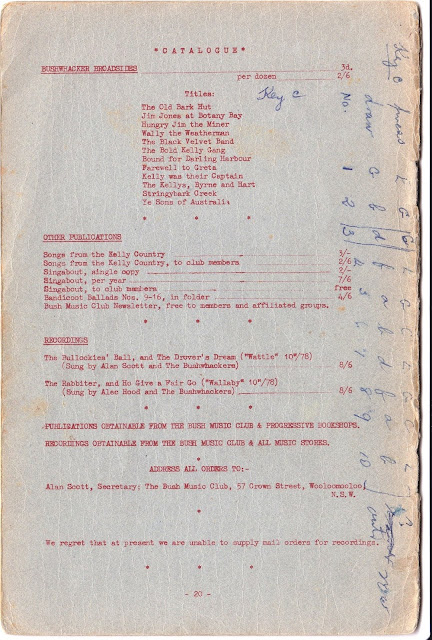 Back cover - 15 months after it's foundation BMC had an enviable list of publications.

Singing Folk Songs by E. Lancaster, the first mention of singing in unison vs. singing in harmony. See a reader's response in Vol 1(2) 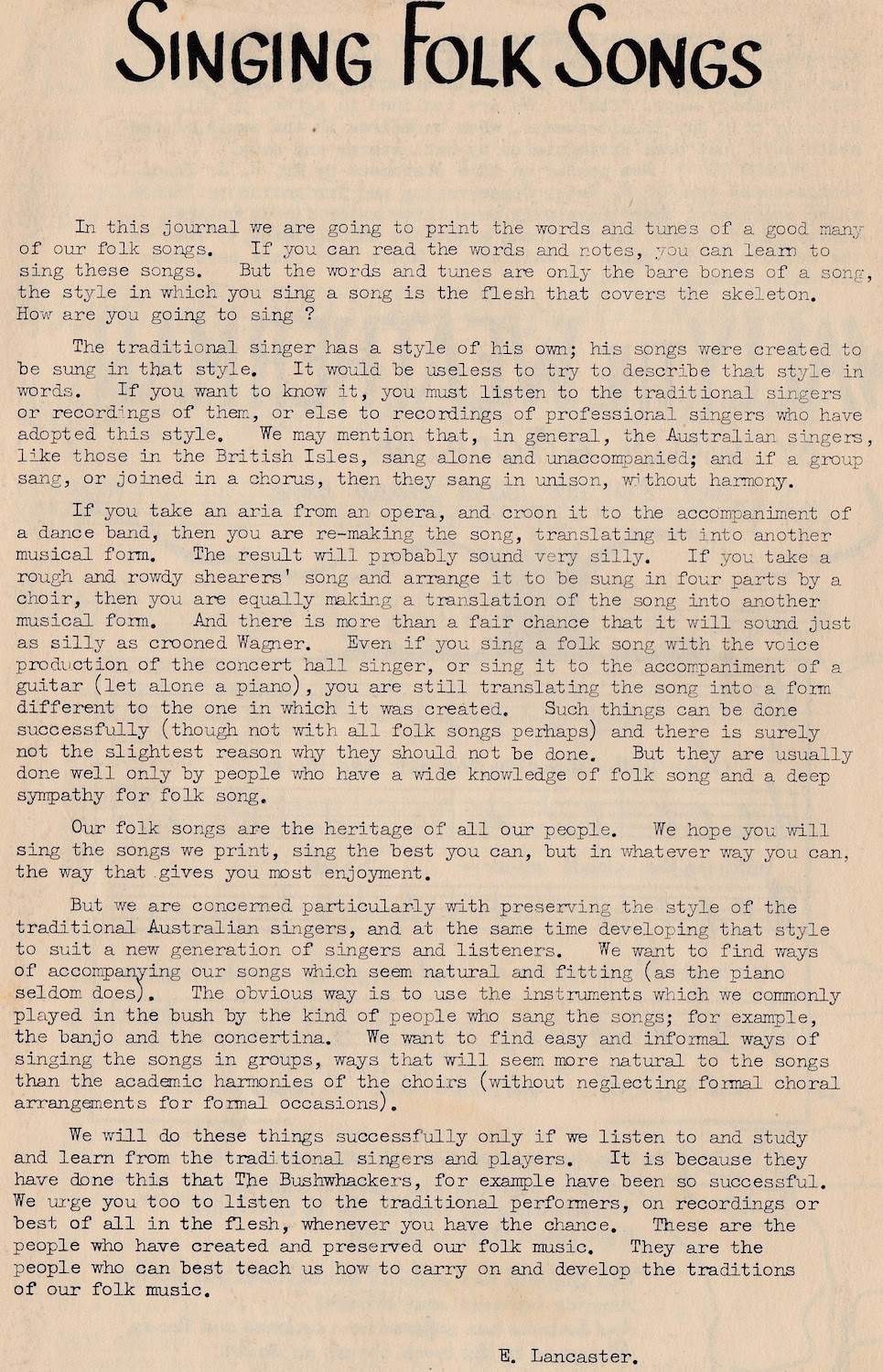 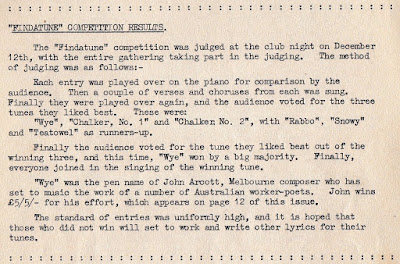 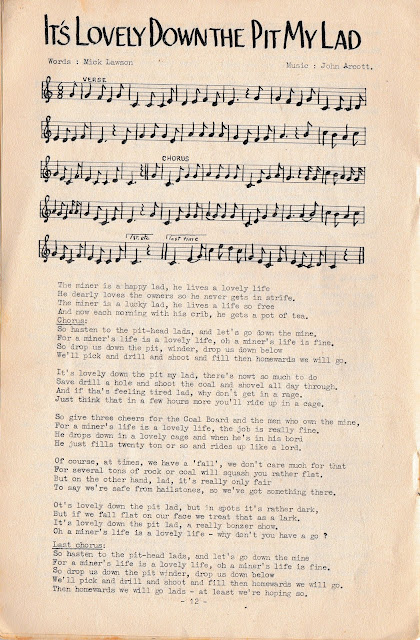 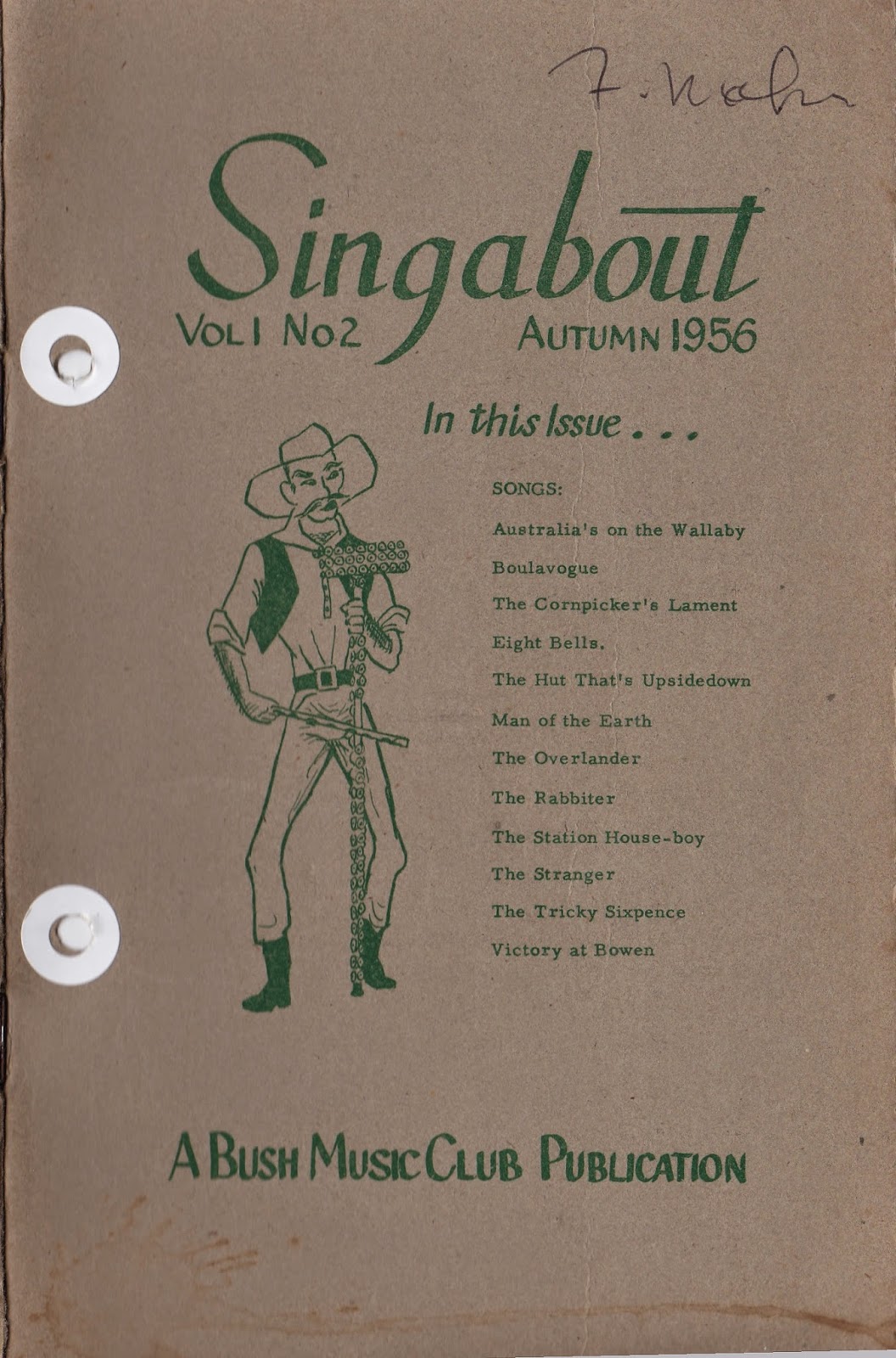 The Stranger by John Manifold
The Tricky Sixpence by Dick Hackett  (tune - The Worried Man Blues)
Eight Bells by Merv Lilly   (tune - Ring the Bell, watchman)
The Cornpicker's Lament  Words; John Meredith    Air - Lady Munro
(note)  Lady Munro is an unprintable ballad recently collected from a shearer to the tune of a variant of Roisin the Beaux.
A Man of the Earth by Jock Graham  Music by John Arcott
The Rabbiter by Stan Wakefield
The Station Houseboy by Ron Spain - music by Ron's 11-year old son Stephen Spain
Victory at Bowen by Ross Tracie, music John Arcott 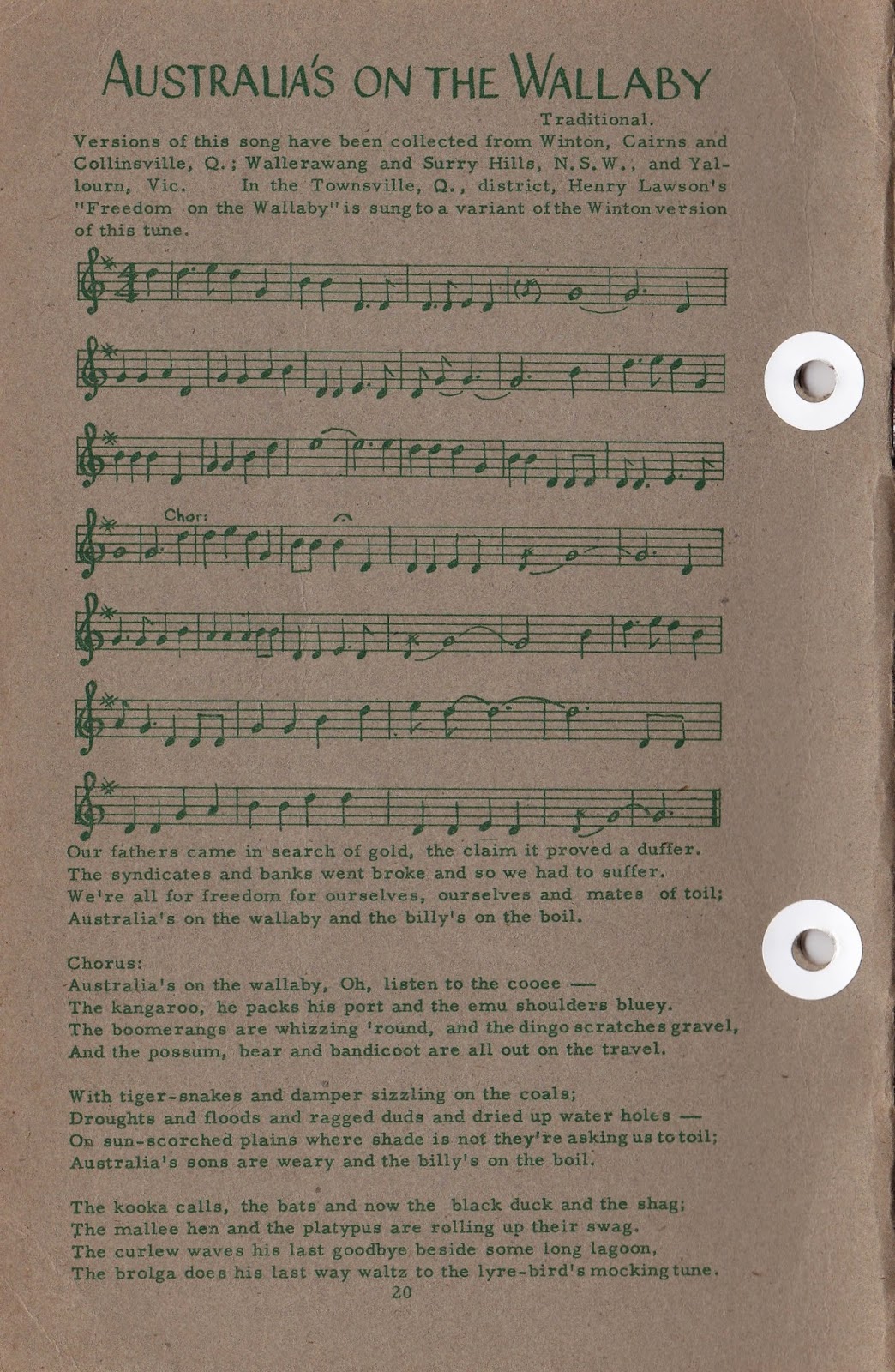 The Overlander  reproduction of Bandicoot Ballad, no. 12.
The Hut That's upside Down - collected by John Meredith
Australia's on the Wallaby (collected in various locations) 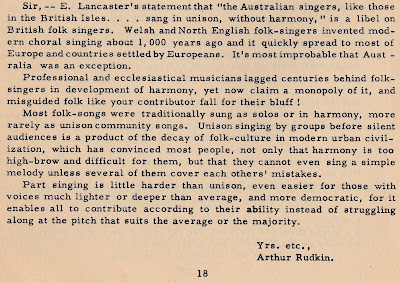 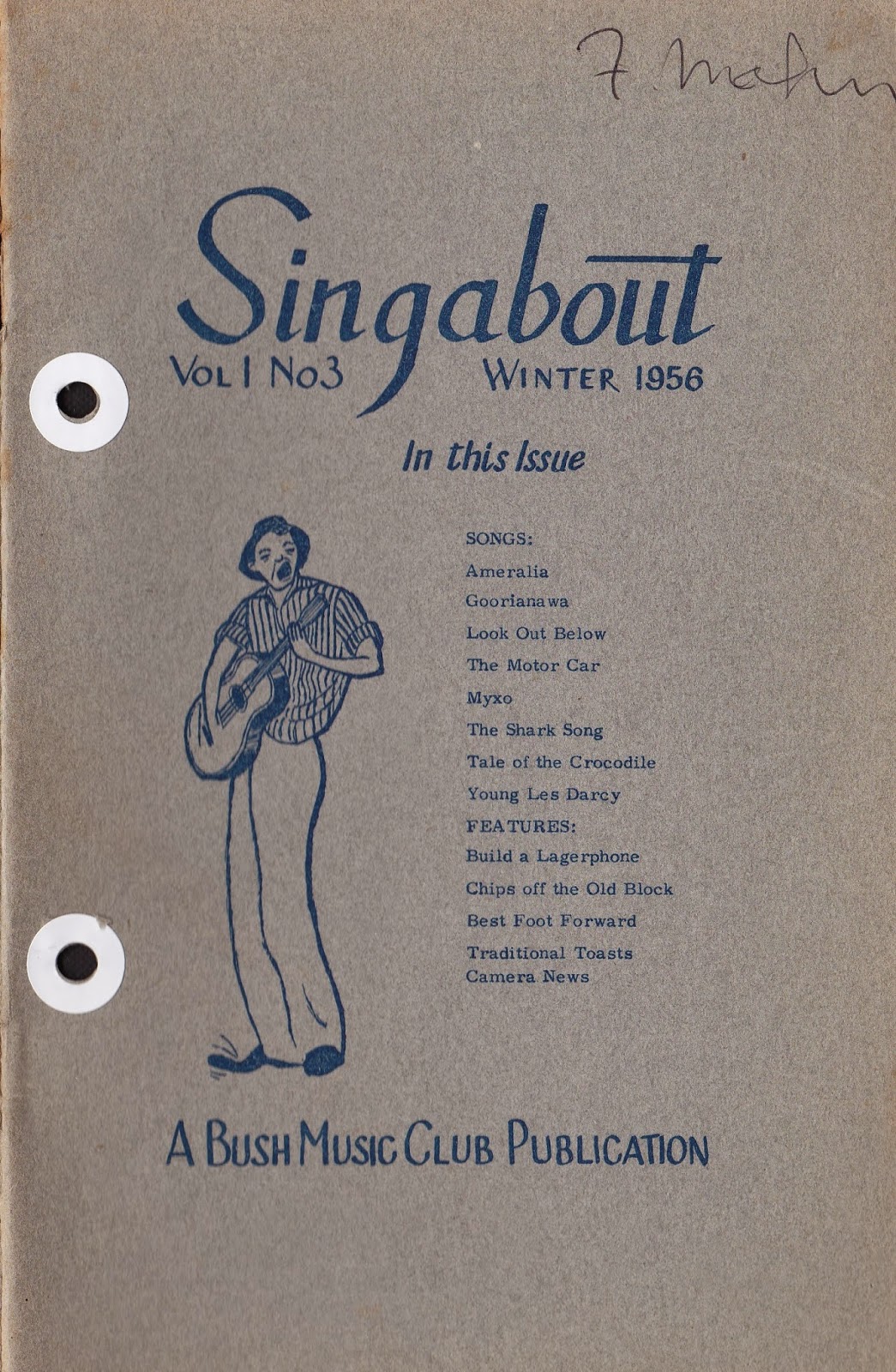 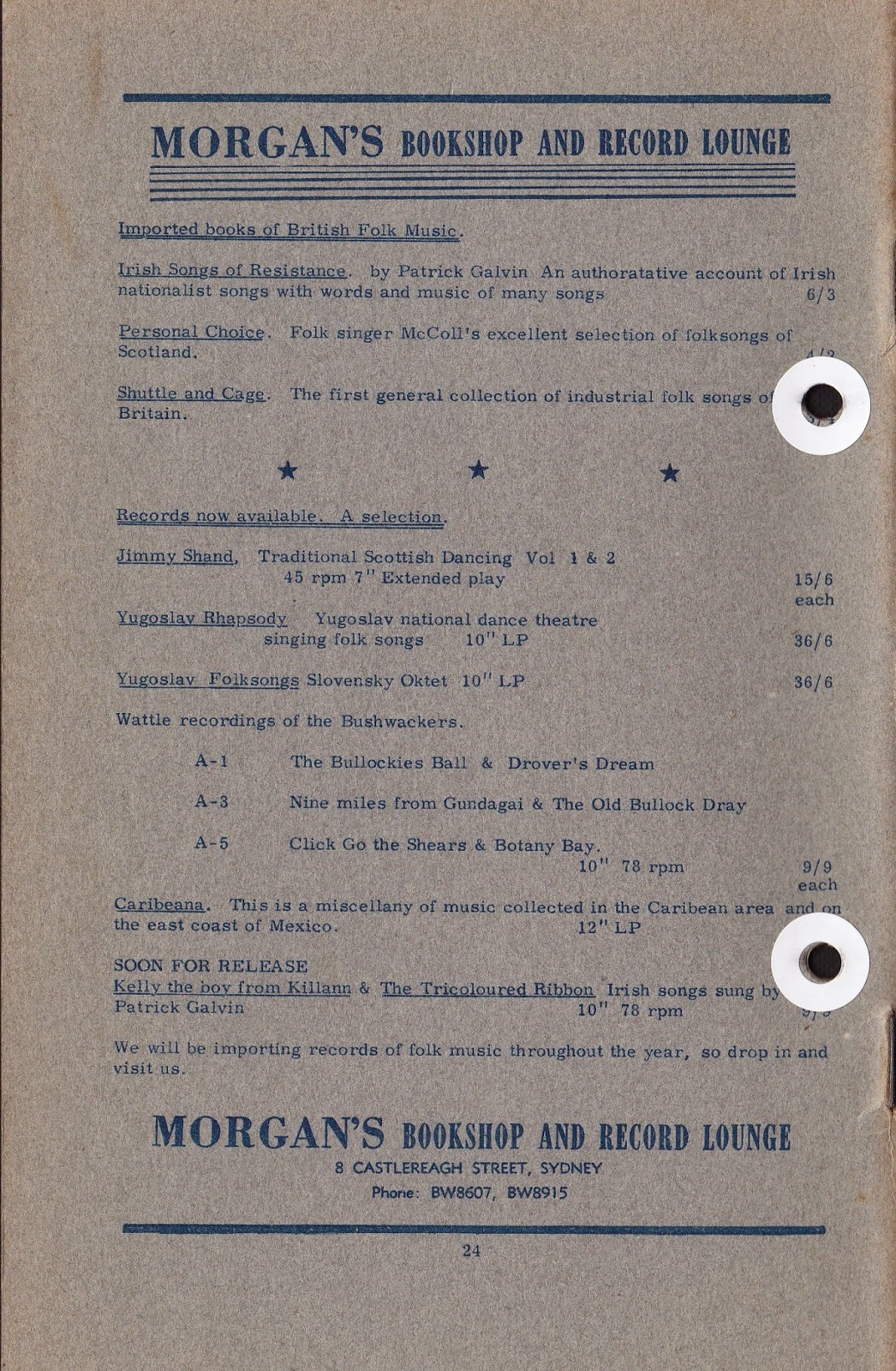 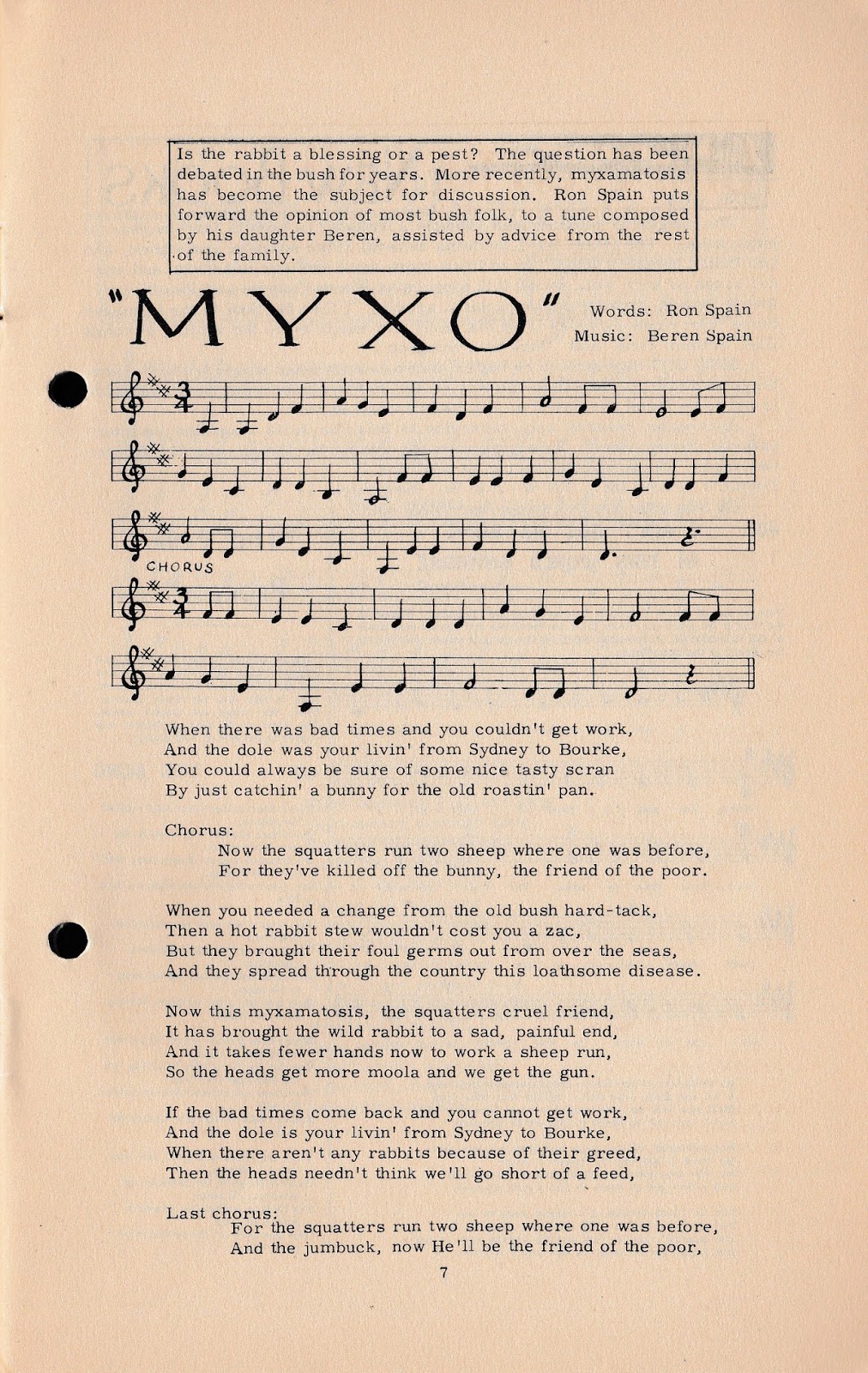 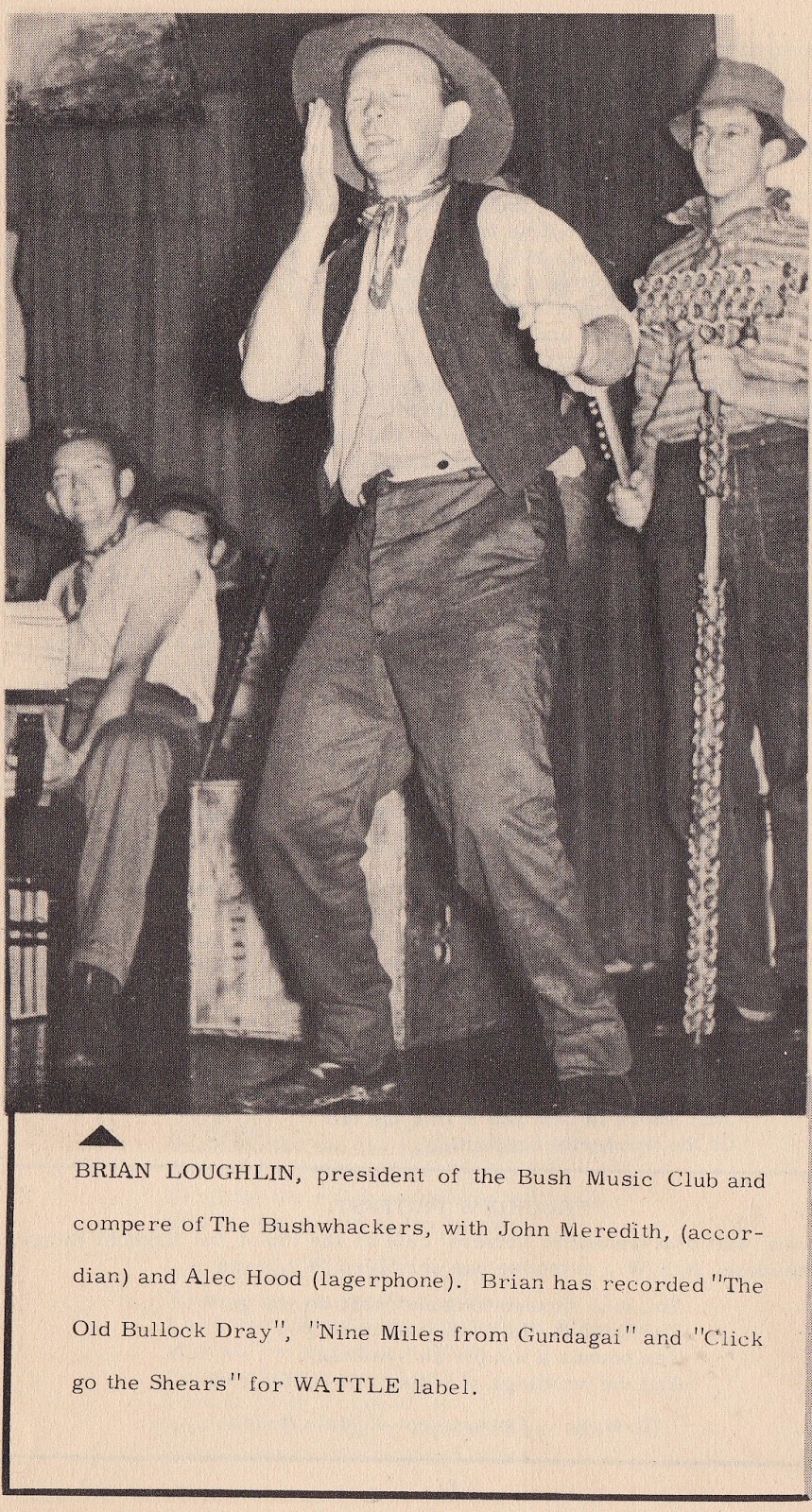 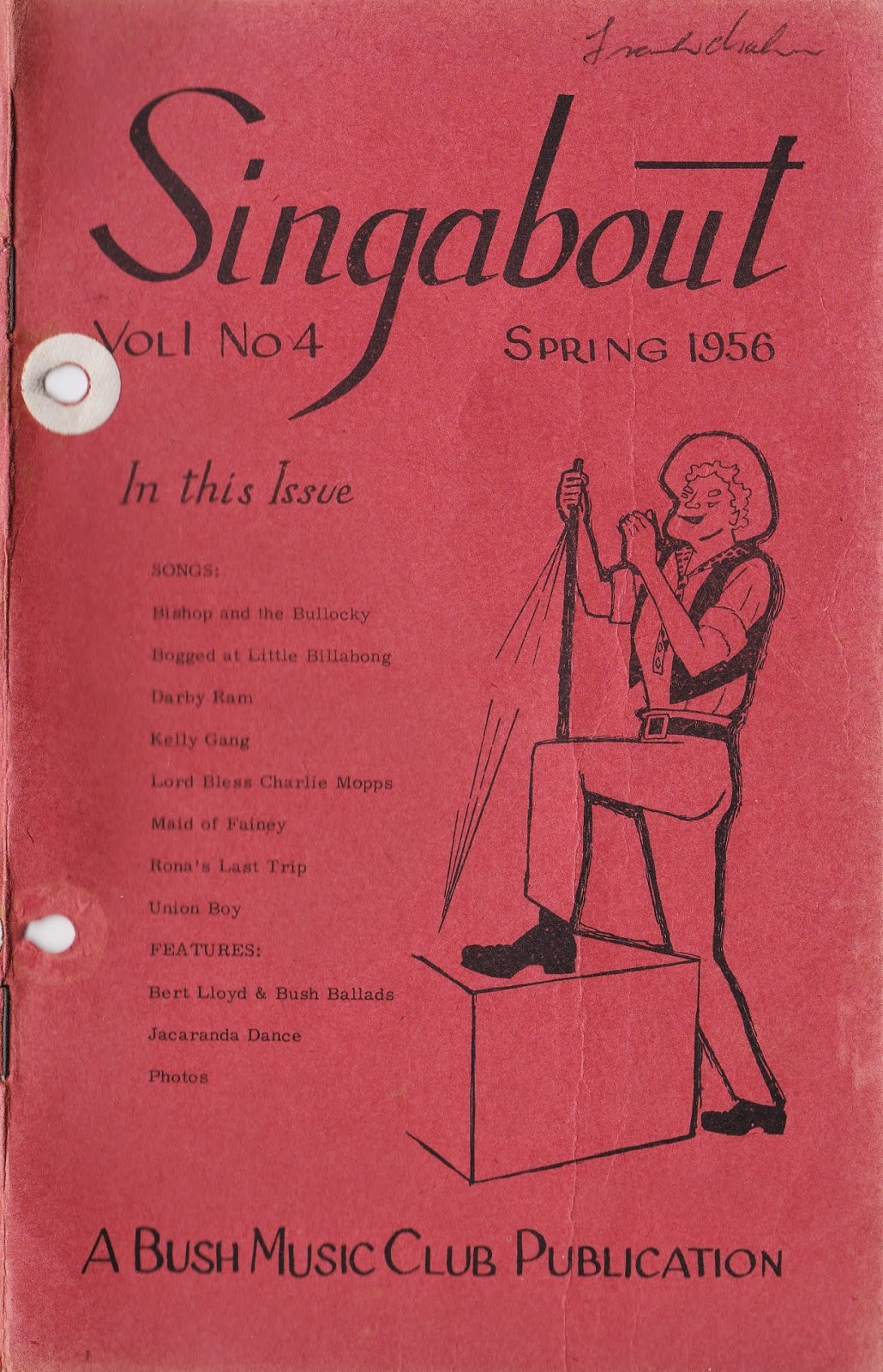 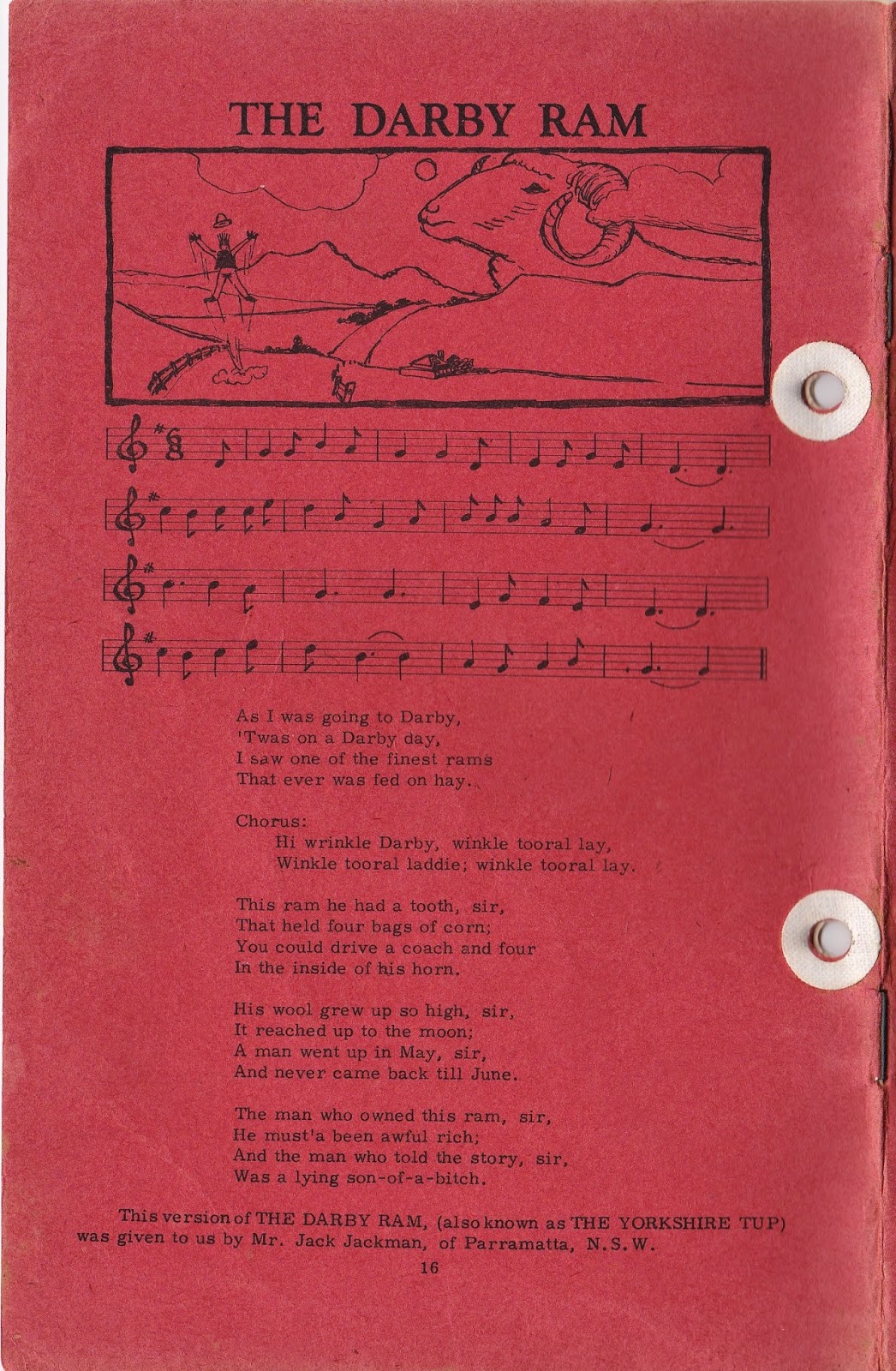 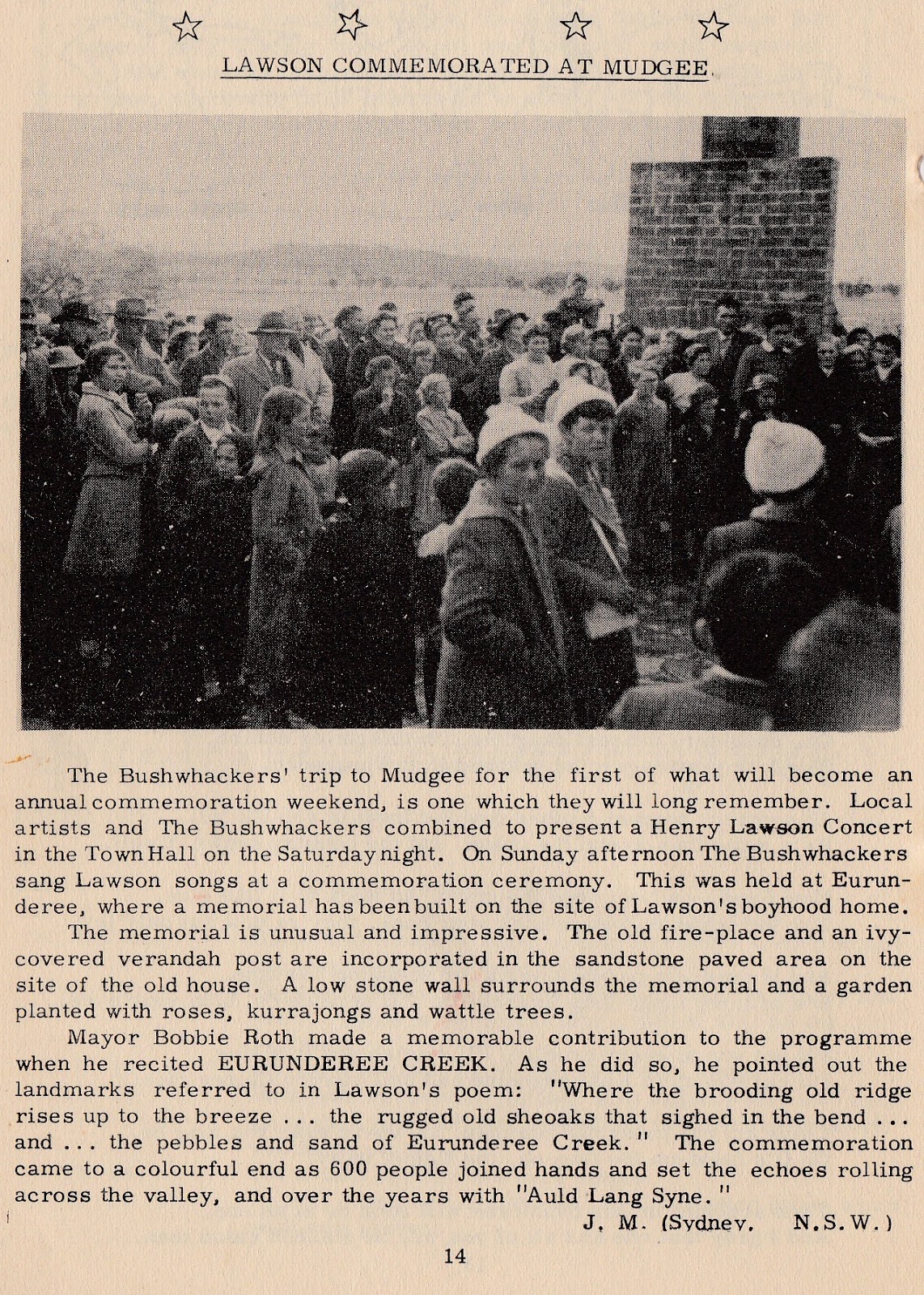 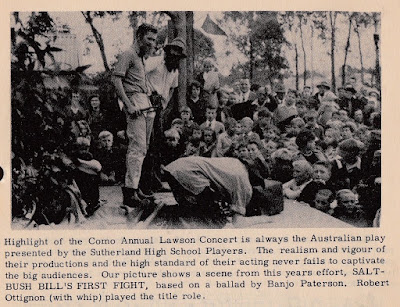 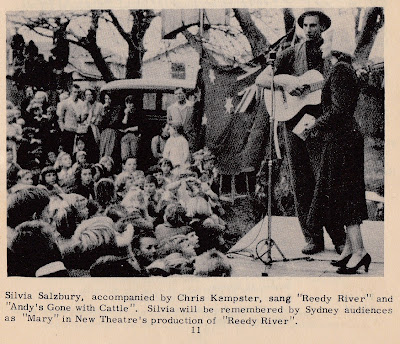