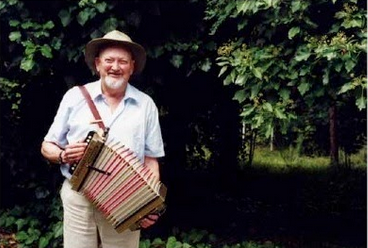 Having a pesto showdown is not the usual type of activity people indulge in on Christmas Day. John Meredith and I shared a common perception of Christmas, which was not really to pay any attention to it all, so on the 25 December during the late 1990s, we often had lunch together and compared and devoured our latest pesto recipes. (For the uninitiated, pesto is a delicious sauce mixture of basil, garlic, oil, nuts and parmesan cheese). In making the appointment, we were both careful to avoid using the normal title of the day!

As any friend of John’s knew, dining with him was never a short or boring affair, in culinary, intellectual, gardening or musical diversity terms. So, while the material world around us was unwrapping countless presents and drinking way too much in the afternoon sun, we enjoyed a simple lunch (liberally covered with pesto) and entertained ourselves with a trip around the garden, playing some tunes and listening to some of John’s recordings. Of course, none of this ever happened without long sessions of John’s anecdotes on all manner of subjects, which I was only too happy to listen to and learn from.

John and I met in about 1995 through our common love of classical music. I played viola in the General Picton’s String Band, an occasional string orchestra that performed concerts at Wilton Winery in the 1990s. John used to come to our concerts with his Thirlmere friend Richard, and we started chatting at one of these. That was the beginning of a friendship that I shall always treasure. Since we lived in neighbouring towns (Picton and Thirlmere), I saw him often.

Most of our time together was at his Rose Cottage in Thirlmere. I spent many happy Saturdays or Sundays there, often with my friend Gerard Cafe, a guitarist and folk singer from Revesby who I used to play with at festivals, fairs and parties around the Camden-Wollondilly-south west Sydney area during the late 1990s. Our friend Peter Reay, a gifted violinist and horticulturalist from Picton often came too (once to shimmy up a tall tree in John’s garden to cut it down while we all ‘oohed’ and ‘aahed’ from below). 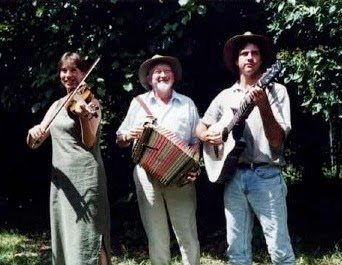 Jan, John and Gerard in the background of Rose Cottage, 5th February 1999

So that we could play along with John on his accordion, we pulled out all our tunes in C “the peoples’ key”. Since I am a music reader (rather than playing by memory as most folkies do), John often asked us to play tunes which he would extract from the books in his extensive library. That would always set off a story or three about the song or tune. Our visits always included an exciting lunch – kangaroo herbed meatloaf (John’s) and avocado whipped with chocolate (mine) were two examples that we tested on ourselves. Sometimes it was 10 hours before we finally left Rose Cottage in the evening. 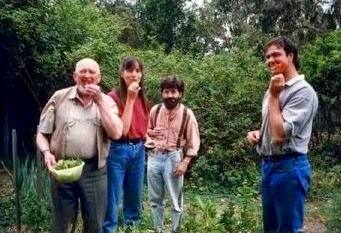 The Picton Writers’ Group held regular Poets at the Pub evenings at both the George IV and Imperial Hotels in Picton. I used to go to these with John, who would enjoy a beer or wine and often read one of his latest short stories to the group. He was always gracious in complimenting other writers on their work too. I think through John’s suggestion, Peter Reay and I introduced some musical interludes into the evening, with violin and viola duets, usually in the folk style. 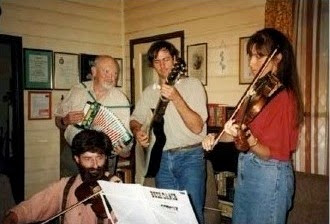 One of John’s stories was The Ultima Thule of Trim, his story of what really happened to Trim, Matthew Flinders’cat. However, this project went a bit further when John composed a song for the story. In John’s words in a letter to me on 4 August 1999 :

I have persuaded Gerard [Cafe] to sing The Ballad of Trim for us to tape and send to Macca for Australia All Over [on ABC radio on Sunday mornings]. We have a good chance of getting to air, as a couple of blokes are doing a reenactment of Flinders circumnavigation of the continent, and will arrive in Port Jackson early next year on the two hundreth anniversary. The State Library will be having a celebration of the event, and they have, and are interested in using the ballad. Maybe Cafe and Co [Gerard and I] might get in on the act? [We didn’t!].

Here is a copy of the tune as transcribed (E & O excepted) for your use in rehearsal. I have had an idea for the final chorus:

With a yo-heave-ho and a boo-hoo-hoo
Trim finished up in a pussy cat stew.

This is to be followed by three plaintive meows, played on the viola! I think the single note, followed by a slide up a semitone, or maybe a quartertone would make a fair imitation, eh?

We must do the recording soon, as those two blokes are up on the Q coast, and phone Macca each Sunday morning to let him know of their progress.”

We did record it soon, in early October in the Rose Cottage kitchen, and spent a fair time trying out the relative merits of various viola meows! And Macca apparently played it on air!

Haiku and renku poems were a favourite of John’s. He used to send me some that he had written, and also read some of them at the Writers’ Group. In return, I also tried my hand at this form. One appears at the front of the Ultima Thule of Trim:

Yes, his cover is to be exposed at last:
Hah! Not a gristly stew,
But an amorous companion to
Furry French Ladies –
Trim the Spunky Feline!

We also engaged in a progressive The Tawny Frogmouth Renku, written progressively with stanzas by Janine King from Balmoral Village, John, Gay Scott of Balmoral Village, her son Bill Scott, John then I (then some of the others again? – I only have the copy up to that stanza).

I was pleased to be able to help out by transcribing some songs for John which he had previously recorded from Nancy Burton, Alby Bobbin, Carrie Milliner, Max Walker, Ray Hibbert and Dolly Waddly. He submitted them to Ron Edwards in Kuranda and were subsequently published by him in the Australian Folklore Society Journal No 45, Sept 1999. Ron had encouraged me to continue transcribing John’s recordings, as John had given Ron Part 3 of his collection for ultimate publishing. It is something that I hope to be able to continue with John’s friends into the future.

Ever a thoughtful man, John made a special trip on the buses to Picton to visit me when I had a long illness. He arrived with a posy of basil (what better for a pesto lover!) and spent the morning playing recorder duets with my mother who was looking after me at the time.

John also became a firm favourite with two of my overseas friends who stayed at our share house in Campbell St, known affectionately as ‘Picton Manor’. Jacoline Kroon, a violinist friend from The Netherlands and Mair Pennington, a Welsh music teacher on exchange to Picton High School, were fascinated by his knowledge of folk music and love of life. On her return, Jacoline sent John sheets of Dutch folk music, which Gerard and I played for him.

Although John was adamant that he “wouldn’t perform in public anymore”, Gerard and I were graced with his accordion and lagerphone playing when we performed at the Picton Fair one year, and also at ‘A Brush with the Bush’ a yearly outdoor art and music day that I helped organise at Wirrimbirra Sanctuary at Bargo. Despite his remarks above, I think John secretly liked publicly playing the tunes that he enjoyed (as long as they were played in the style that he approved of!). 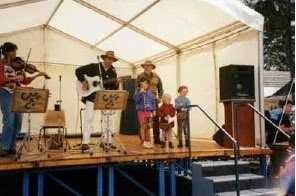 Performing at Picton Fair, 23rd November, 1996, with some young lagerphonists under John's guidance

Other memories of John are:

• his wonderful collection of salvias in the Rose Cottage garden;

• his infamous ways of dealing with pesky cats;

• his determination in taking a photo of a visiting antechinus in his kitchen;

• his method of responding to Jehovah’s Witnesses and other unwanted visitors to Rose Cottage (“insert unsavoury language here”);

• his refusal to attend Folk Festivals; and

• him marvelling at the collection of wattles (one of his favourite plants) at the Mt Annan Garden on our trip there in 1999. 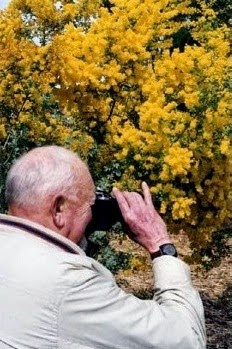 When John moved back to Holbrook on October 14th 1999, I felt a great sense of loss, since he had become very much like a grandfather to me, as I only ever met my own grandfather in England 3 times. I saw him often in the last weeks before he moved, and at our last goodbye at Rose Cottage he granted me a hug as we left, although warned me not to get too soppy!

One of his letters to me from Holbrook dated 29 November 1999 says:

What an exhausting Sunday evening! First my sister Mavis phones for a one hour rundown on the family; then Jan Howe rings for similar; then just as I get back to my two-hours-in-the-glass wine, sister Thelma rings. Finally, at 9.30 I managed to drink my wine and toddle off to bed. And people ask ‘Aren’t you lonely, living there all be yourself?!

Shortly before his move, John informed me that he had “just sold his library to the Picton bookshop lady” and “he was very pleased because she had literally paid for his move – hee hee!”. Like many others, I was gobsmacked that he had sold off two-thirds of his personal library, as it was an absolute treasure trove of information. I immediately asked the bookshop lady to hold aside any of his books on music or botany, being the main subjects that I associated with him. Over some months, I became the new custodian of a sizeable portion of his library, which together with the many books and records he gave me over the years, I hope to be able to hold in one collection for others to enjoy.

Not the least of the joys of knowing John was the way in which Martin and I met. John used to say Oh, Martin Fallding came by last weekend and we played some music – he’s from the Hunter Valley and he’s a town planner too you know. I couldn’t be sure from this statement whether Martin was a strange bearded folkie from the hills or whether he was married with 7 children, or whether he was a boring planner! None of these turned out to be anywhere near correct! We didn’t meet through John, but at a reunion of graduates of our Town Planning degree at the University of NSW in late 1999, when I saw Martin’s name tag and exclaimed “So, you’re Martin Fallding!!”. The rest of the reunion was spent discussing music and John, rather than planning. Our first journey together was to visit John in Holbrook, which I think Martin has described in his memories of John. Sadly, John died before I left Picton to move to the Hunter Valley with Martin in 2001, and we certainly missed him at our wedding in 2002. 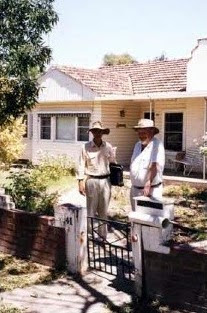 May the wattle bloom in John’s memory for a long time to come! From a haiku that John sent to me after our trip to Mt Annan Botanic Gardens:

Viewing wattle bloom –
The hills, valleys and the roads,
All alight with gold!