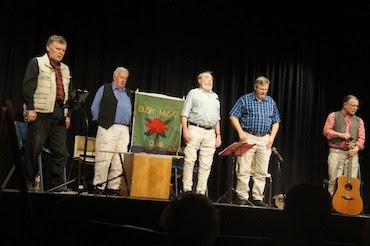 
In the beginning
It's hard to imagine an Australia without the ubiquitous bush band but that is how things were back in the early 1950s.

The "colonial cringe" was in full flight. Genuine folk musicians were seldom given serious consideration in the public eye. Performers rarely achieved the degree of polish in their performance needed to gain popularity. To be genuinely Australian was a commitment to relative obscurity.

Enter The Heathcote Bushwhackers.  A breath of fresh air. Everything old was new again. Suddenly everyone was singing about shearers and drovers. Performers came out of the woodwork and a new era of Australian entertainment was begun.

The band was formed in Sydney in early 1952 by pioneer folklore collector John Meredith and two of his friends, Jack Barrie and Brian Loughlin.

In an interview with folksinger Bobby Campbell, John Meredith recalled the local activities in his Sydney suburb of Heathcote: -
I was living in Heathcote and there was an organisation called  The Defence of Australian Culture which was aimed at saving Australian culture from the inroads being made by imported American crap. They hit on the idea of having Australian social evenings where everything on the program was Australian.

There would be poems read by Dorothy Hewitt and somebody would sing some Australian songs, Faith Bandler would sing some aboriginal or Torres Strait Island songs. Anyway we had one of these evenings down at Heathcote which was quite a success so we decided to do another one. For the second  one I suggested to Brian Loughlin that we get together and do two or three Australian songs.

We stuck on false whiskers, dressed rough and gave out with our entire repertoire

In spite of my whiskers falling off, or maybe because of them, we were an immediate success ... as a comedy act!           John Meredith


Late in 1952 they gave their first public performance at the Rivioli Hall in Hurstville. It was at this time that the name of the band was permanently changed to The Bushwhackers.

In December 1953 the band performed at the Sydney New Theatre amateur production of Reedy River, an Australian musical written by Dick Diamond featuring bush and Australian folk music, some of which had been collected by Meredith. 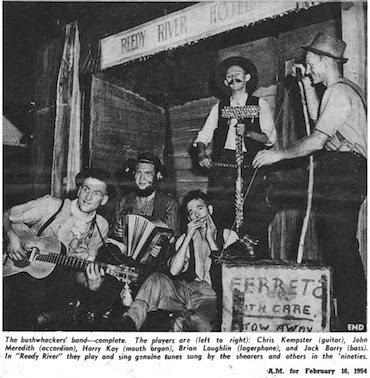 The musical was an enormous success and run for fourteen months after which the group rode high on an unprecedented wave of popularity.


The formation of the Bush Music Club

In 1954 ...  Reedy River produced by the New Theatre was still playing to packed houses every weekend - starring the Bushwhackers' Band led by John Meredith.

It was the intention of the B.M.C. to encourage the formation of small bands in various suburbs, capable of doing work similar to that of the Bushwhackers' Band. However these small bands did not last very long, and eventually broke apart: some members joined the B.M.C.

The newly formed B.M.C. met on Friday evenings at the Video Studios, Castlereagh Street.
"... although I have not recorded my first visit, it was quite close to the foundation. The small group at Granville were regularly practicing. This group dissolved eventually, and I became a more regular attender of B.M.C. meetings"     Jamie Carlin