After he retired all his photo albums and BMC Library and Archives came to the Hut.

All albums are labelled, and as Bob was a professional photographer, all negatives are date stamped YYMMDD. Members have been identifying people in the photos, and the albums will be handed over to the National Library where they will be invaluable in identifying participants when the negatives are digitised.

The earliest album covers the 1982 Bush Music Festival and the latest the 2007 Illawarra Folk Festival when he stopped printing his photos, some years after buying a digital camera.

This is the Film by 'Film' index' to the first four, or so, years after I returned to Sydney ... after Patricia & I married, down in Hobart ~ Easter 1970.

I've taken the ( ... partial ... ?) listing of negative folders ... and brief content titles ... and worked down for about as far as it appears that I was storing them in my small supply of ~ sealed steel Vietnam era ammo boxes.

I should refresh my memory by counting the film files (~ usually 36 exposure ... in each ammo box)! I'll get back to confirm how many ammo boxes cover that period...

Apologies for not getting back to you sooner have been recording in the wonderful Tasmania again.

A couple of links https://www.youtube.com/watch?v=VrcQPxkvwU4&list=UUOrA5H7ULWbJG4vyiLslzAQ

Thanks for all the information about your images and the references, it all sounds very interesting and extremely significant. I have only started to realise the importance of my early videos and as you started with your photographs a lot earlier than me they are even more important.

Unfortunately I won’t be at the Bundanoon weekend but if you are keen to archive your images we will work out a way to get them.

Thanks again, Bob, please keep in touch on this, it is MOST important.

This collection is vital to the preservation of folklore in Australia.

I've been trying to beat my scanty "database" of the 35 mm film files stored in my stack of (~ Vietnam Era) metal Ammo boxes ... into something that is comprehensible , ... to me - at least (?)!

I've been through the first two (.. or so ... ) boxes - and listed the 'subjects' / locations / approx dates / descriptions and the odd observation - and I've highlighted all the files that look appropriate in red type. These are ... largely ... those covering activities (mostly performers) in (generally Sydney, commercial, folk clubs / Bush Music Club meetings - activities - concert performances and any other public appearances and activities.

There is no real coverage of Tasmanian (Hobart region) folk clubs as high speed film wasn't easy to get ...and I wasn't expecting any sales of performer photos ... down there! I did experiment with one rare cassette of newly developed high-speed Ektachrome (experimental development for early NASA launches ... trying to evaluate the apparent "flickering lights" outside the capsule(s) " ... later found to be stray high energy radiation passing through capsule ... and Astronauts' eyeballs!

I imagine that that range of my earlier coverage of the folk revival should be of interest. My coverage outside of BMC activities broadened during my 4 years of the Photography Certificate (some days / some nights) ... as I had to be in "full-time photographic employment as a condition for thr Certificate studies. When I graduated, I went straight into employment at the Photographic Branch of the (then) Sydney County Council ... and, through name changes to Sydney Electricity, Sydelec, Energy Australia, Ausgrid (and anything else that I've overlooked) I'm still here ... but working on the archives ... while everyone who needs a casual "snap" just whips out a digital camera ... or, these days, their 'phone ... and lives with whatever they manage to grab!

This is the single file I have been going through ... trying to mark up interesting / significant details:

Other Items I haven't evaluated here would include the cassette recorder "interviews" I think I've listed earlier. There is also a bunch of song and verse recordings of John Dengate ... that amalgamated after John's recent death. I suspect that I don't have much unique material on these recordings ... by myself - or other BMC and nearby enthusiasts - but they are here and set aside!

The other cassette recordings ... particularly Pat's Grandmother at 101 years (with memories of dancing in Tasmania ... before she married in the late 19th century and with no later memories to confuse the issue - as her husband did not dance .../ as well as the 1970s cassette of John Kell - especially his reminiscences of his family "band" of the 1920s ... down round the Barallier region south of Sydney and - in west of Mittagong ... are all worth listening to ... and, possibly, transcribing! 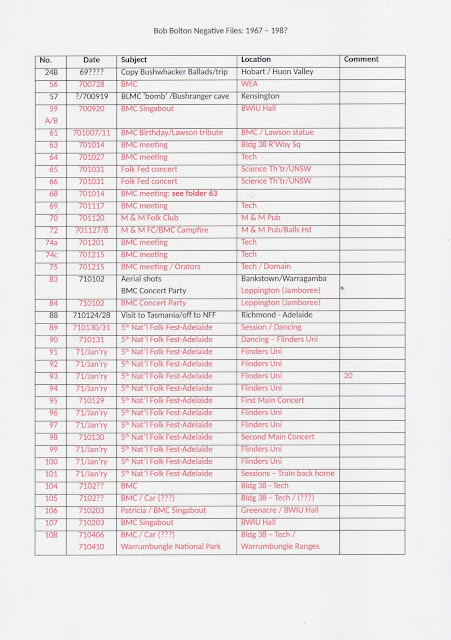 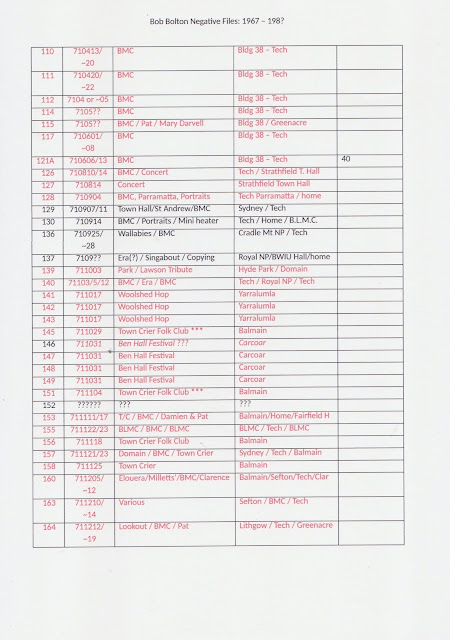 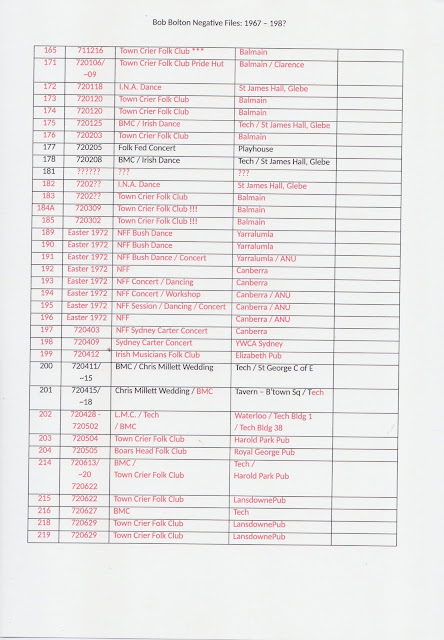 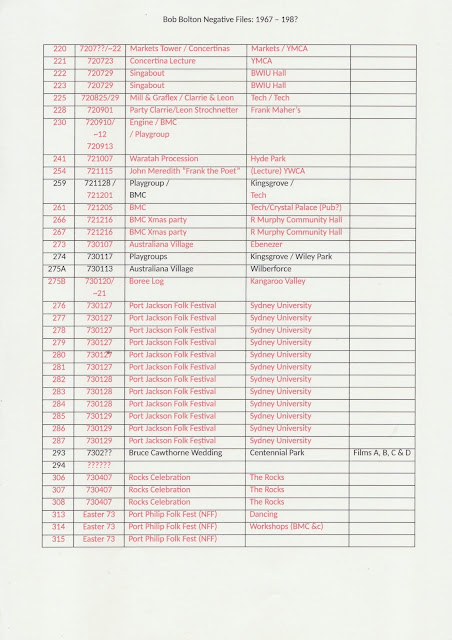 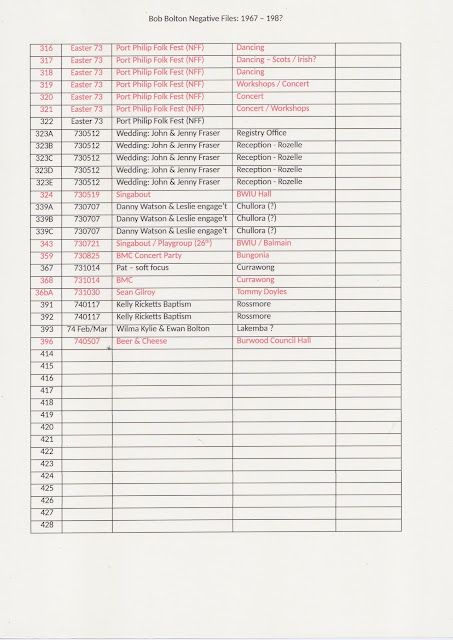