Review by Dale Dengate of Keith McKenry's More Than A Life, John Meredith and the Fight for Australian Tradition. 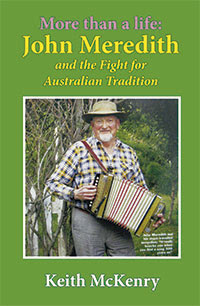 MORE THAN A LIFE: John Meredith. The Fight for Australian Tradition by Keith McKenry

Some reflections upon the biography and the BMC by R. Dale Dengate (2014)
Since a review I wrote of Keith McKenry's biography of John Meredith was published in Cornstalk (2015) several people have spoken to me about their opinions of the book and their memories. Of course, all of these views show a different perspective, which confirms that it is a difficult task to write about any one’s life let alone such a rich and productive life as Meredith's was. So McKenry is to be congratulated on compiling a very readable biography on Meredith. Although I feel that it is the work done by John Meredith, aka ‘Merro’ in awakening Australians to their musical traditions that should take precedence over the personal details as it was a fight for recognition in the 1950s and maybe still is. Merro was extremely important in the field of Australian Folklore and the founding of Bush Music Club and much more. McKenry has managed to cover a great number of these aspects. 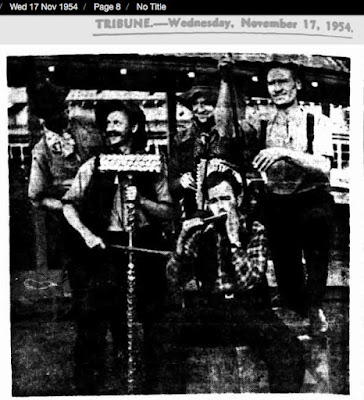 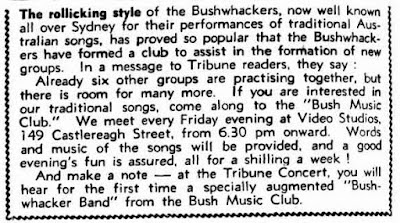 Some of McKenry’s interests are not the same as mine as I feel they are unnecessary distractions from the achievements of Merro’s life; however, writers often tell us as much about themselves as their subject. Indeed, it is often controversies that get people interested. So when Alex Hood rang and we shared a long conversation of memories from over fifty years ago, I did encourage him to write his comments. Chris Woodland and I have shared lengthy recollections of our times with Merro and many of his are in the book. I hope some of the BMC members from those early times write their accounts, especially Jamie Carlin who has kept diaries since he joined the BMC in mid 1950s.

John and I missed the fifties with the BMC, as we joined in the early 1960s. We felt privileged to get to know Merro, Gay and Alan Scott, Duke Tritton, the Loughlins, and even Dame Mary Gilmore came into Fellowship House as did Lawson’s daughter Bertha, among many others we met at the Tuesday night meetings of the Club. Sally Sloane, one of the people that Merro collected an amazing number of songs and tunes from, regularly sang at Singabout evenings.

Years later I assisted Gay Scott in bringing out her book of Sally’s songs which were linked to the experience of women. When Gay initially asked Merro to write an introduction, he said that he didn’t think women needed their own songs as they could sing any songs they chose to learn. 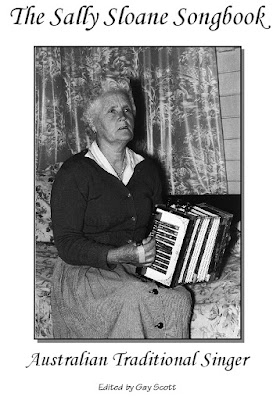 After 1964, Merro invited John and me to Walden, a simple cottage set in the bush, at Balmoral village, via the Picton loop line. There we read more books than we read in our University studies and discussed not just Australian folklore but Thoreau, Emerson and contemporary naturalists and philosophers. Yet Merro was always interested in our studies and opinions, which John often put into song. Later, in 1980s, Merro visited us to record John’s songs and verse so the NLA would have copies. As I had been trained as a biology teacher, Merro sent a series of photographs he took of unusual plants after our discussion of propagation by seed, pollen, insect or cuttings. Merro not only knew the theory, he could put it into practice. I have some slides taken by Merro of me, in flowing yellow gown, flitting through his hundreds of wattle bushes grown from seed. I have never met anyone who was so interested in the theory but also capable of the practical application of that information as Merro. So John and I were flabbergasted when a few years later we drove along the Walden drive to see all the acacias cut down. Merro told us that borers had become a problem, but McKenry quotes a different story. Whatever the reason, they got the chop, as did the specially bred game roosters named after the royal family. Each weekend, when we stayed with Merro, he would announce he was off to the fowl yard to chop off Prince Charlie’s head or one of the other royally named chooks for our evening meal. It would duly be served with vegetables from the garden and lots of herbs. Cooking with herbs was another thing Merro introduced me to. John usually contributed with a song. 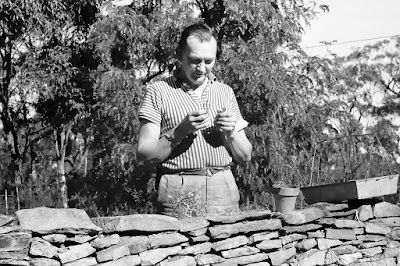 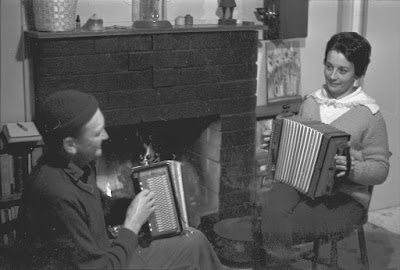 Merro & Virginia Woodland at Walden, c.1967, Ilford film no. 16 (Chris Woodland photo)
During the sixties, Merro, John and I were regular visitors to each other’s houses. We were chuffed when Merro declared we were ideal guests as we could assist with some of his projects. He set John D. to illustrate his books including The Tales of Rabelais with ink and watercolours. As I was studying geography, I was given the Indian ink to draw maps for some of his planned books. The research and discovery of a new lead was always discussed with great elation and we avidly followed the progress with its trials, frustrations with editors and publication dates.

During this time, I never felt that Merro was suffering from depression as McKenry implies. Suitable accommodation in the city was always a challenge and he did have some health problems with his one kidney, but Merro always found solutions and was proud of the application of his chemical knowledge.

Merro was meticulous in writing his memories and filing his letters, which I have enjoyed reading in the National Library As Keith acknowledges, he has relied heavily on these in the biography. The book gives details of Merro and friends collecting travels. This is a very significant part of the book. Merro’s approach was to meet the people who had particular songs he was after before recording their music and verses. His files recorded the precise place and date when the song was sung, but McKenry often has the reader flipping back pages to locate the possible year: was it ’84 or ’87? Nevertheless, Keith does a thorough job of interviewing most of the people who went on collecting trips with Merro and recording their contributions. Inevitably there were controversies and differences of opinion and McKenry gives his insights into these. John Meredith. The Fight for Australian Tradition, makes an important contribution to that fight.