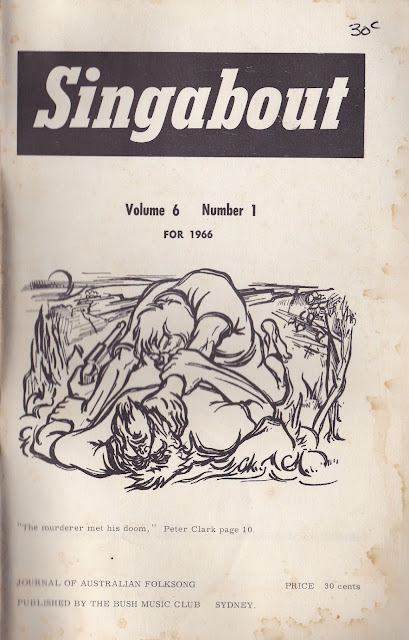 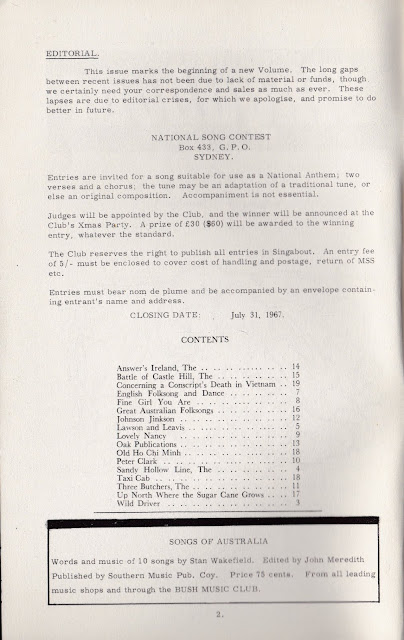 2.  Singabout, Volume 6(1), 1966 - EDITORIAL- This issue marks the beginning of a new Volume. The long gaps between recent issues  has not been for lack of material or funds, though we certainly need your correspondence and sales as much as ever. These lapses are due to editorial crises, for which we apologies, and promise to do better in future.
NATIONAL SONG CONTEST. Entries are invited for a song suitable to use as a National Anthem; two verses and a chorus, the tune may be an adaption of a traditional tune, or else an original composition, and the winner will be announced at the Club's Xmas Party. A prize of £30 ($60) will be awarded  to the winning entry, whatever the standard. The Club reserves the right to publish all entries in Singabout ... closing date  July 31st 1967
CONTENTS.  Ad for Songs of Australia  by Stan Wakefield, 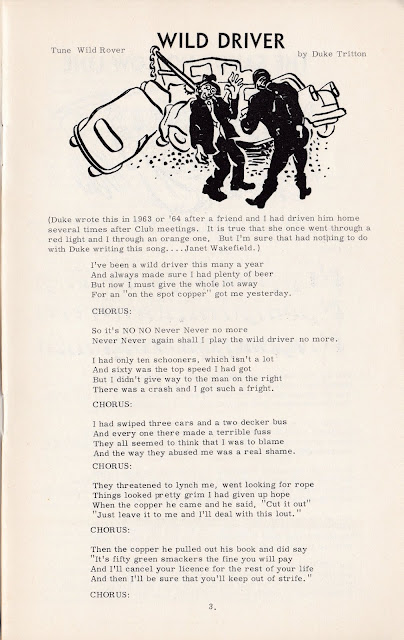 3.  Singabout, Volume 6(1), 1966 - WILD DRIVER tune Wild Rover by Duke Tritton.  (Duke wrote this in 1963 or '64 after a friend and I had driven him home several times after Club meetings. It is true she once went through a red light and I through an orange one, but I'm sure that had nothing to do with Duke writing this song.  Janet Wakefield) 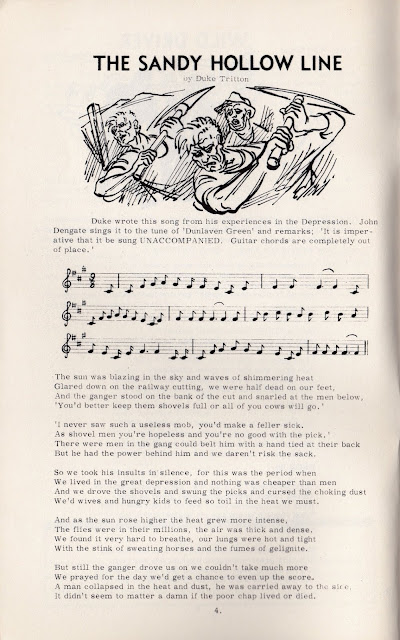 4.  Singabout, Volume 6(1), 1966 - THE SANDY HOLLOW LINE. Duke wrote this song from his experiences in the Depression. John Dengate sings it to the tune of Dunlaven Green and remarks 'It is imperative that it be sung UNACCOMPANIED. Guitar chords are completely out of place.' 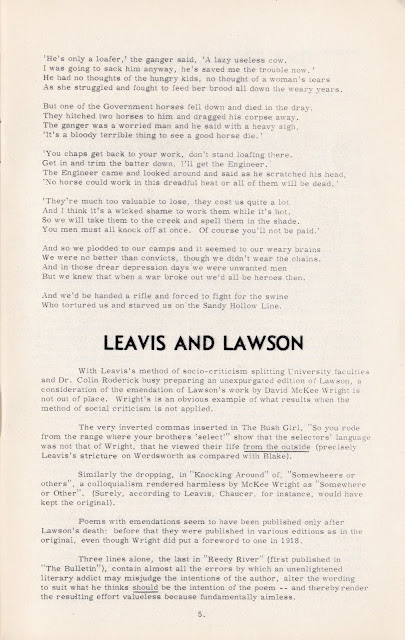 5.  Singabout, Volume 6(1), 1966 -  THE SANDY HOLLOW LINE. (cont)
LEVIS AND LAWSON With Leavis's method of socio-criticism splitting university faculties and Dr Colin Roderick busy preparing an expurgated edition of Lawson, a consideration of the emendation of Lawson's work by David McKee Wright [As an editorial consultant for Angus and Robertson, he controversially edited Henry' Lawson's selected (1918) and collected poems (1925)] is not out of place. ...  The very inverted commas inserted in The Bush Girl, So you rode from the range where your brothers 'select' showed that the selectors' language was not that of Wright ... 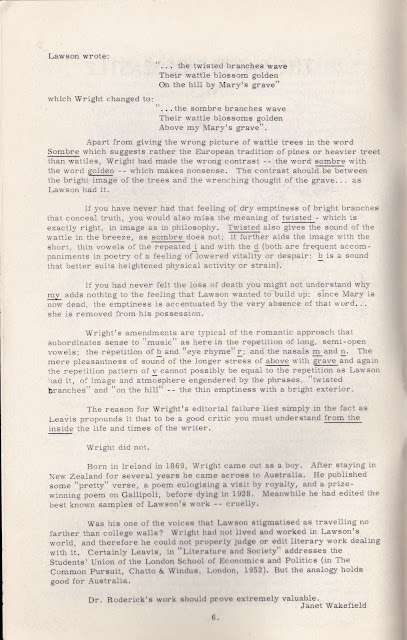 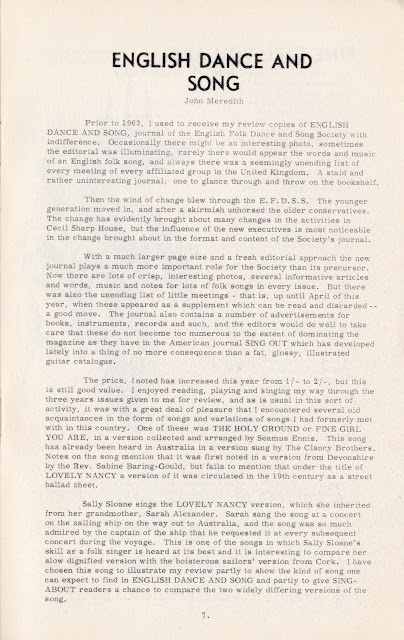 7.  Singabout, Volume 6(1), 1966 - ENGLISH DANCE AND SONG John Meredith  (review, includes a comparison of Sally Sloane's version of a song to the one published in English dance & song) ) 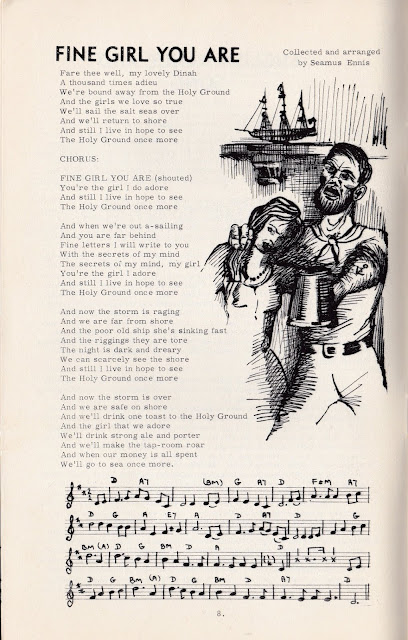 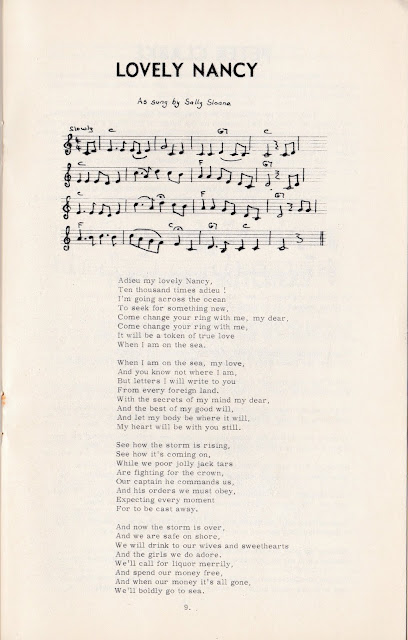 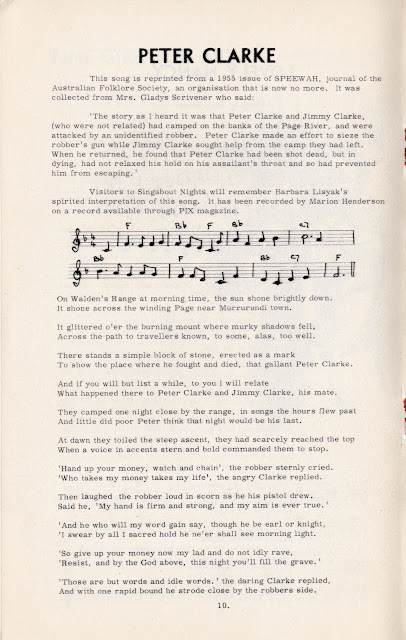 10.  Singabout, Volume 6(1), 1966 - PETER CLARKE. This song is reprinted from a 1955 issue of SPEEWAH, journal of the Australian Folklore Society, an organisation that is now no more. It was collected from Mrs Gladys Scrivener ... Visitors to Singabout Nights will remember Barbara's Lisyak's spirited interpretation of this song. It has been recorded by Marion Henderson on a record available through PIX magazine. 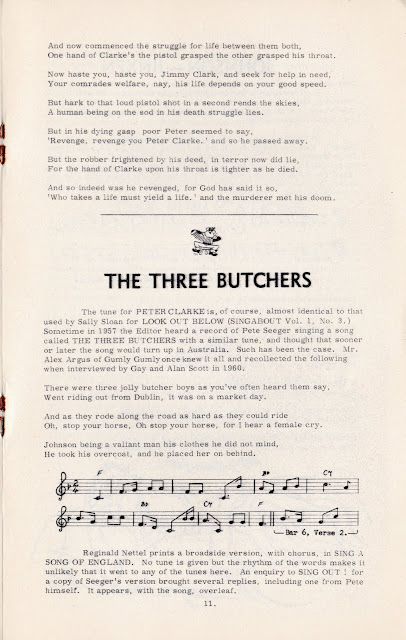 11.  Singabout, Volume 6(1), 1966 - PETER CLARKE. (Cont)
THE THREE BUTCHERS. The tune for PETER CLARKE is, of course, almost identical to that used by Sally Sloane for LOOK OUT BELOW (Singabout Vol.1, No.3.) Sometime in 1957 the editor heard a record of Pete Seeger singing a song called THE THREE BUTCHERS with a similar tune, and thought that sooner or later the song would turn up in Australia ... Mr Alex Argus of Gumly Gumly ... interviewed by Gay and Alan Scott in 1960 ... Reginald Nettle prints a broadside version  with chorus in SING A SONG OF ENGLAND ... 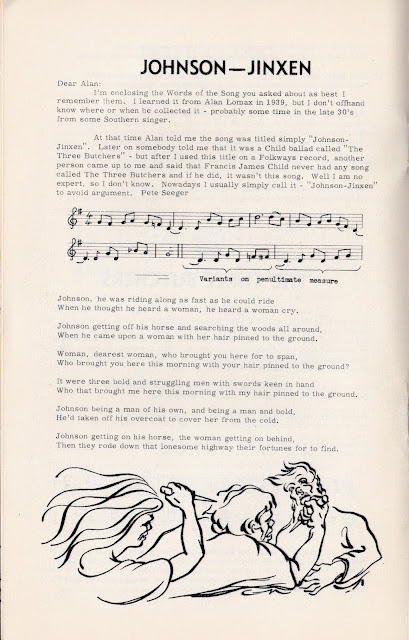 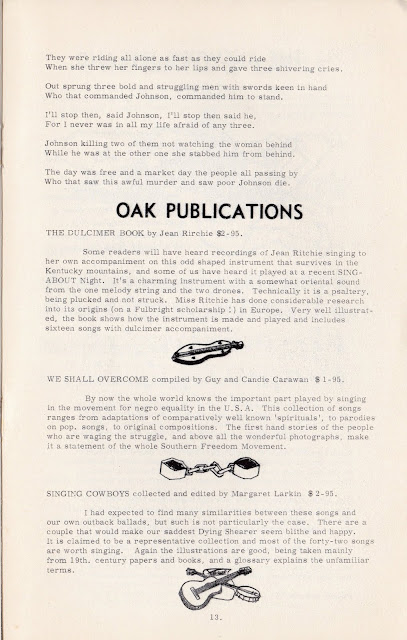 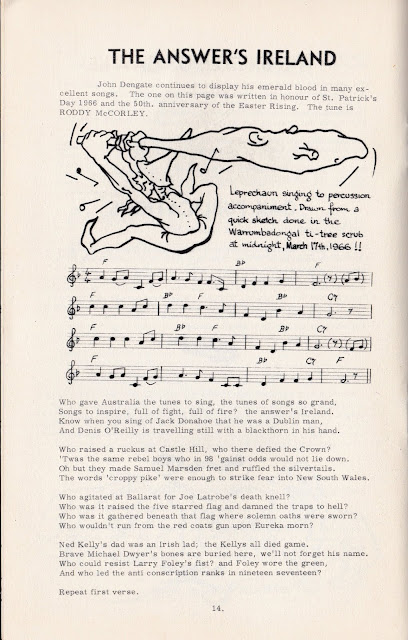 14.  Singabout, Volume 6(1), 1966 - THE ANSWER'S IRELAND. John Dengate continues to display his emerald blood in many excellent songs.  The one on this page was written in honour of St Patrick's Day 1966 and the 50th Anniversary of the Easter Uprising. Tune Roddy McCorley 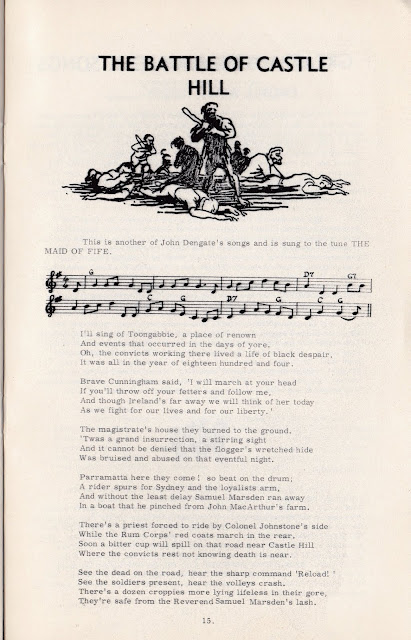 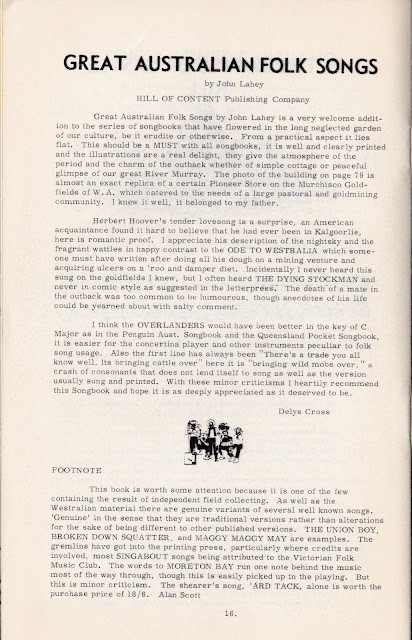 16.  Singabout, Volume 6(1), 1966 - GREAT AUSTRALIAN FOLK SONGS by John Lahey, Hill of Content Publishing Company .. is a vey welcome addition to the series of songbooks that have flourished in the long neglected garden of our culture ,... Delys Cross.  FOOTNOTE - This book is worth some attention because it is one of the few containing the result of independent field collecting. As well as the Westralian material there are genuine variants of several well known songs ... Alan Scott 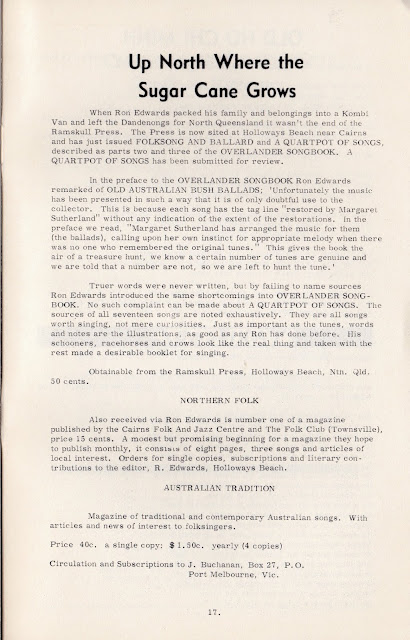 17.  Singabout, Volume 6(1), 1966 - UP NORTH WHERE THE SUGAR CANE GROWS. When ron Edwards packed the family and its belongings into a Kimbi Van and left the Dardenongs for North Queensland it wasn't the end of the Ramskull Press ... the press has now issued FOLKSONG AND BALLAD and A QUARTPOT OF SONGS, parts 2 & 3 of THE OVERLAND SONGBOOK. Also received from Ron Edwards is NORTHERN FOLK, his new magazine.
Ad for AUSTRALIAN TRADITION 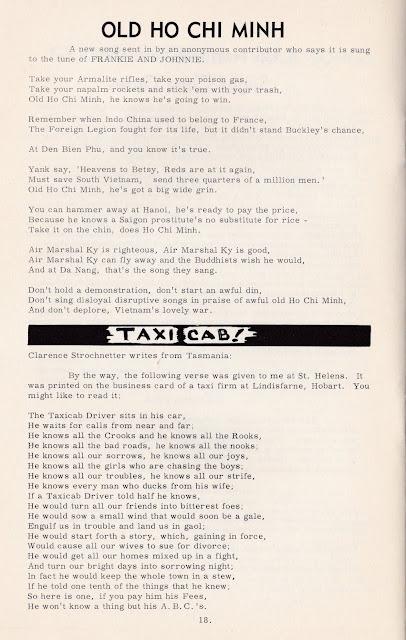 Take your Armalite rifles, take your poison gas,
Take your napalm rockets and stick them in your trash,
Old Ho Chi Minh, he knows he's going to win.
Remember when Indo China used to belong to France,
The Foreign Legion fought for its life, but it didn't stand Buckley's chance,
At Den Bien Phu, and you know its true.
Yanks say 'Heavens to Betsy, Reds are at it again,
Must save South Vietnam, send three quarters of a million men.'
Old Ho Chi Minh, he's got a big wide grin.
You can hammer away at Hanoi, he's ready to pay the price,
Because he knows a Saigon prostitute's no substitute for rice -
Take it on the chin, does Ho Chi Minh.
Air Marshal Ky is righteous, Air Marshal Ky is good,
Air Marshal Ky can fly away and the Buddhists wish he would,
And at Da Nang, that's the song they sang.
Don't hold a demonstration, don't start an awful din,
Don't sing disloyal disruptive songs in praise of awful Ho Chi Minh,
And don't deplore, Vietnam's lovely war.

from an original mss. in Chris Woodland's files - The original second line went: Take your napalm rockets and shove them them right up your ... er ... shirt.
The fourth verse finishes with: Takes (not Take) it on the chin ...  (email 16/11/20)
from Dale Dengate's recollection - Take your napalm rockets and stick ‘em up your arse. Maybe words were cleaned up for performance (email 16/11/20)

TAXI CAB Clarence Strochnetter writes from Tasmania  ... it was printed on a business card of a taxi firm in Lindesfarne, Hobart ... 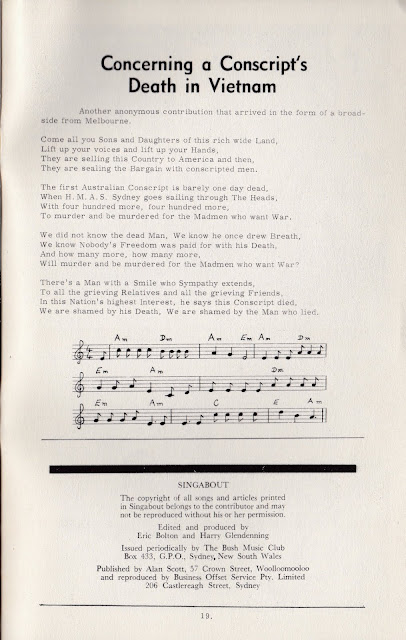 19.  Singabout, Volume 6(1), 1966 - CONCERNING A CONSCRIPTS DEATH IN VIETNAM  - Another anonymous contribution that arrived in the form of a broadside from Melbourne.

Come all you Sons and Daughters of this rich wide Land,
Lift up your voices and lift up your Hands,
They are selling this country to America and then,
They are sealing the Bargain with conscripted men.

We did not know the dead Man, We knew he once drew Breath
We know Nobody's Freedom was paid for with his Death,
And how many more, how many more,
Will murder and be murdered for the Madmen who want War?

SINGABOUT edited and produced by Eric Bolton and Harry Glendenning 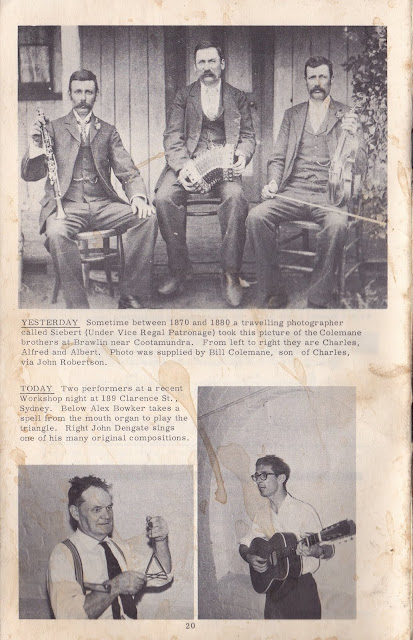 20.  Singabout, Volume 6(1), 1966 - YESTERDAY Sometime between 1870 and 1880 a travelling photographer ... took this picture of the Coleman brothers at Brawlin near Cootamundra.  TODAY -Two performers at a recent Workshop  ... Alex Bowker and John Dengate