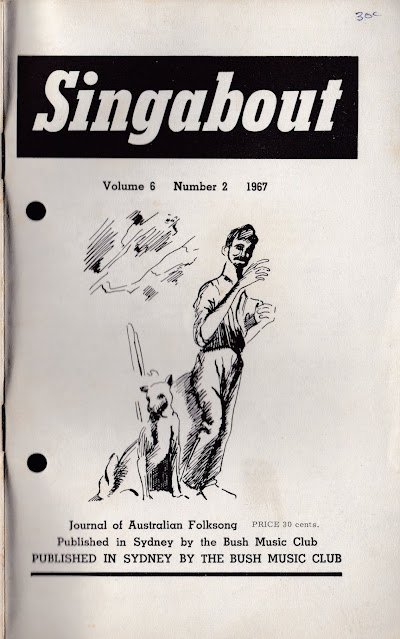 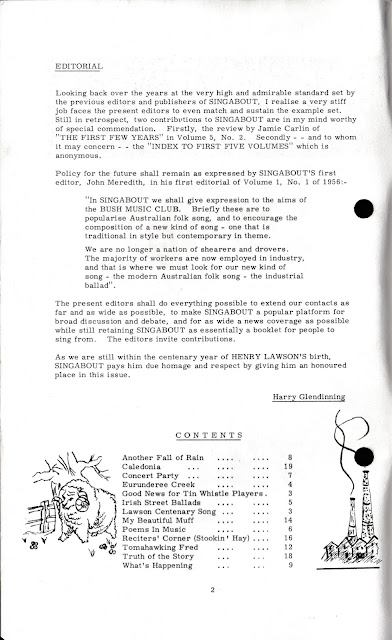 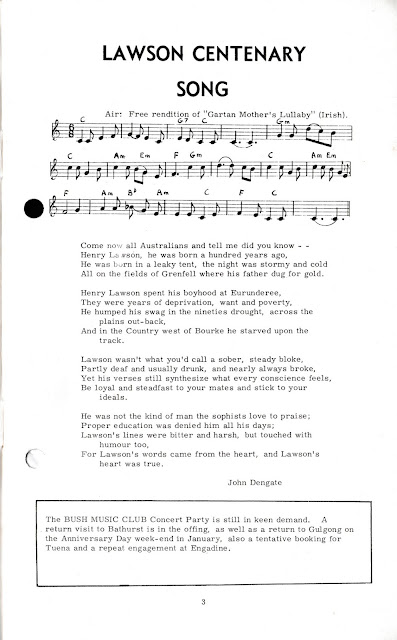 3.  Singabout, Volume 6(2), 1967 - LAWSON CENTENARY SONG by John Dengate.  Air;  Free rendition of Gartan Mother's lullaby (Irish)  The BUSH MUSIC CLUB Concert Party is still in keen demand. A return visit to Bathurst is in the offing, as well as a return to Gulgong on the Anniversary Day week-end in January, also a tentative booking for Tuena and a repeat engagement at Engadine. 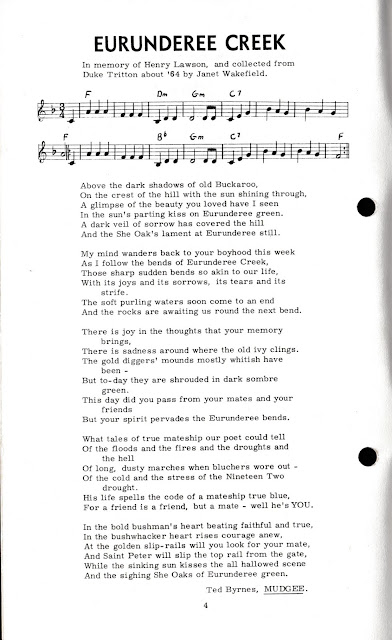 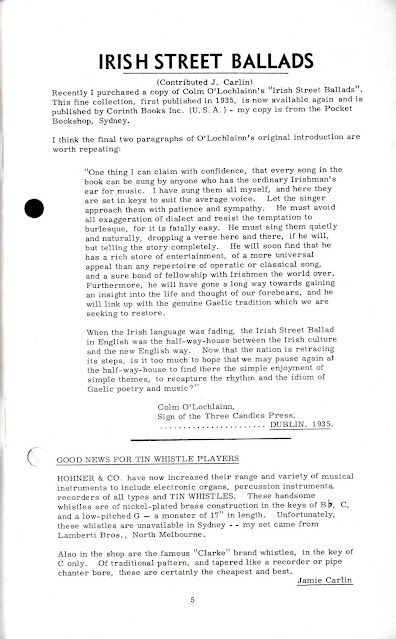 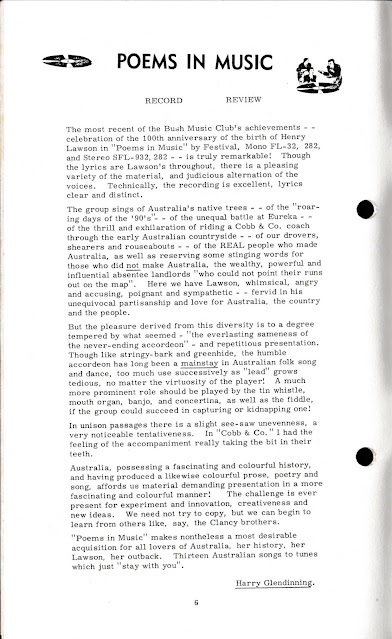 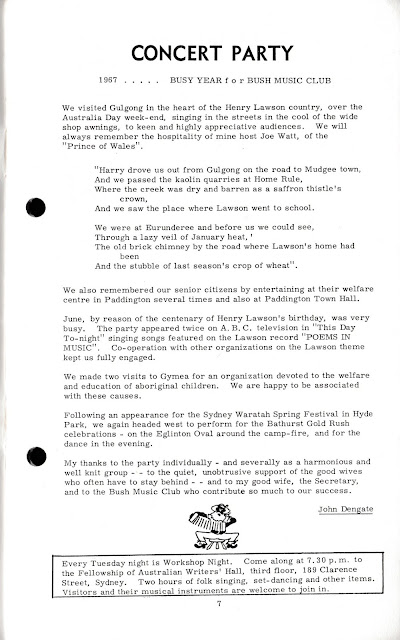 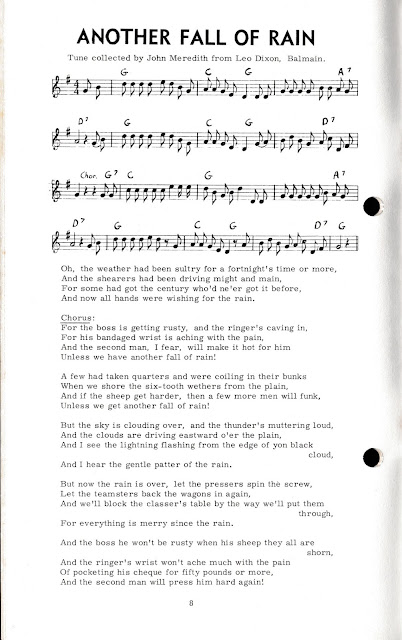 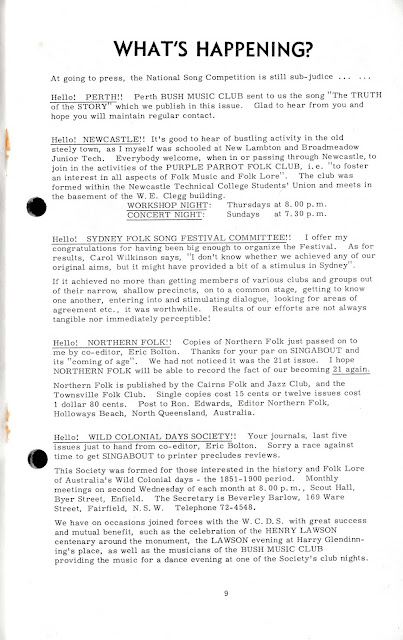 9.  Singabout, Volume 6(2), 1967 - WHAT'S HAPPENING? At going to press, the National Song Competition is still sub-judice ...
Hello, PERTH! Perth Bush Music Club sent us the song THE TRUTH OF THE STORY. Glad to hear from you and hope you will maintain regular contact.
Hello, NEWCASTLE!  ... Purple Parrot Folk club
Hello, SYDNEY FOLK SONG FESTIVAL COMMITTEE! ... congratulations for being big enough to organise the Festival.
Hello, NORTHERN FOLK! ... published by the Cairns Folk and Jazz Club, and the Townsville Folk Club ...
Hello, WILD COLONIAL DAYS SOCIETY!  The Society was formed for those interested in the history and Folk Lore of Australia's Wild Colonial Days, the 1851-1900 period ... We have on occasions joined forces with the WCDS ... 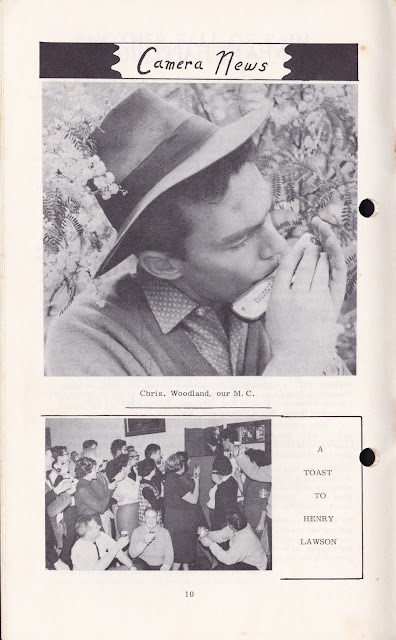 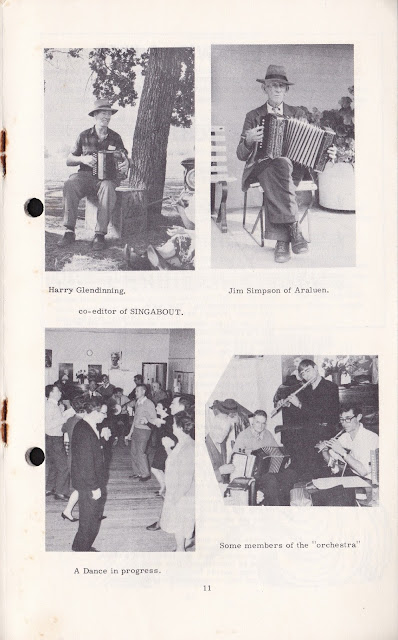 11.  Singabout, Volume 6(2), 1967 - Harry Glendinning, co-editor of SINGABOUT. Jim Simpson of Araluen. A dance in progress. Some members of the "orchestra" 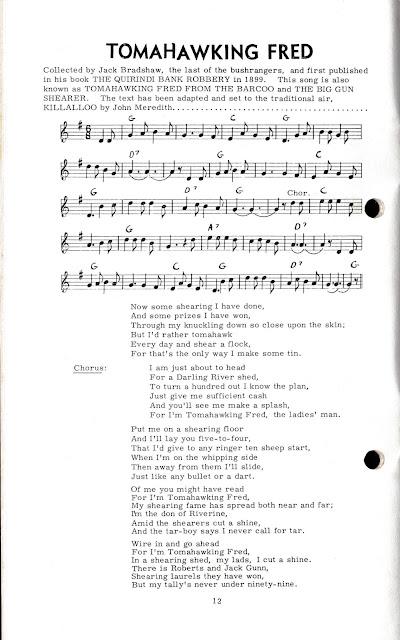 12.  Singabout, Volume 6(2), 1967 - TOMAHAWKING FRED collected by Jack Bradshaw, the last of the bushrangers, and first published in his book THE QUIRINDI BANK ROBBERY in 1899. (Maitland, T. Dimmock, 1899) This song is also known as TOMAHAWKING FRED FROM THE BARCOO and THE BIG GUN SHEARER. The text has been adapted and set to the traditional air, Killalloo by John Meredith. 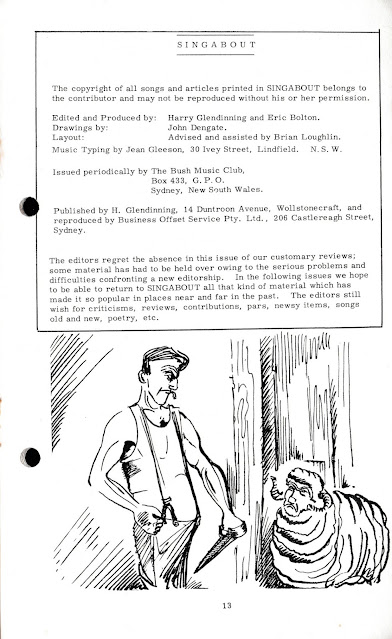 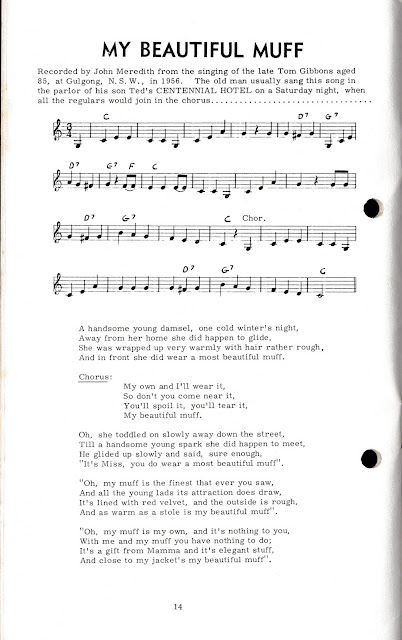 14.  Singabout, Volume 6(2), 1967 - MY BEAUTIFUL MUFF. Recorded by John Meredith from the singing of the late Tom Gibbons aged 85, at Gulgong, NSW.  The old man usually sang this song in the parlour of his son Ted's CENTENNIAL HOTEL on a Saturday night, when all the regulars would join in the chorus. 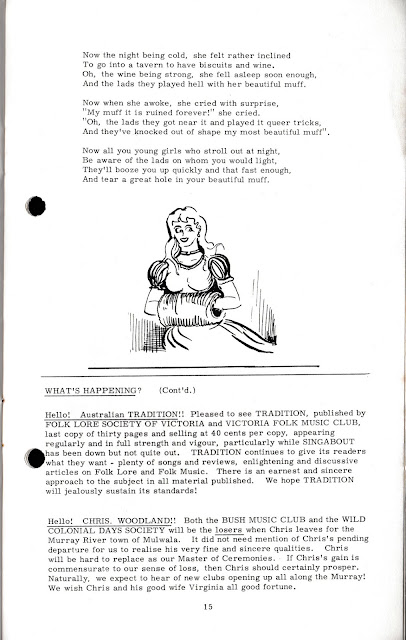 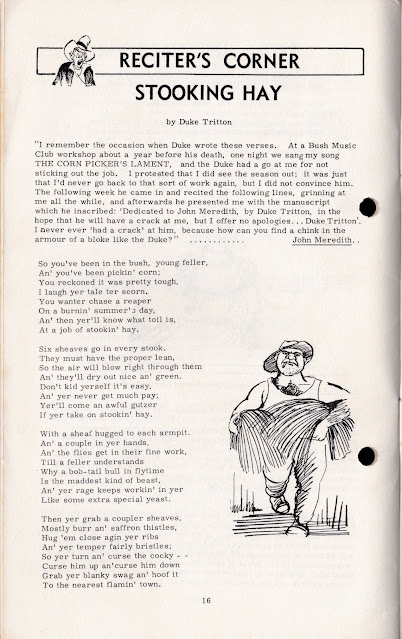 16.  Singabout, Volume 6(2), 1967 - RECITERS CORNER. STOOKING HAY by Duke Tritton. I remember the occasion when Duke wrote these verses. At a Bush Music Club workshop about a year before his death ...   John Meredith 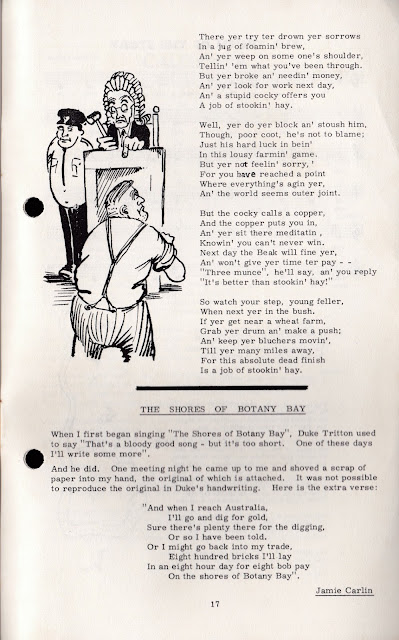 17.  Singabout, Volume 6(2), 1967 -  STOOKING HAY (cont)  THE SHORES OF BOTANY.  When I first began singing The Shores of Botany Bay, Duke Tritton used to say "That's a bloody good song - but it's too short. One of these days I'll write some more." And he did. One meeting night he came up to me and shoved a scarp of paper into my hand ... here is the extra verse. Jamie Carllin 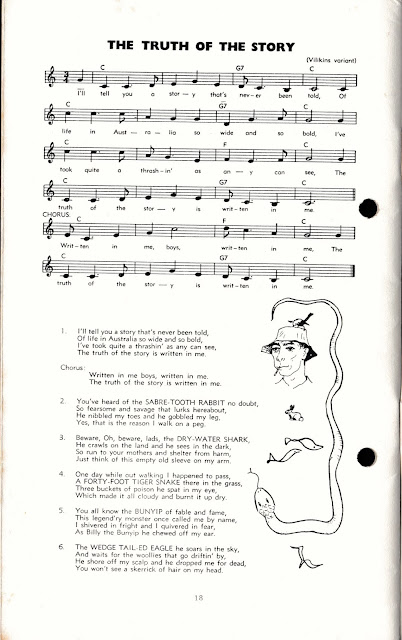 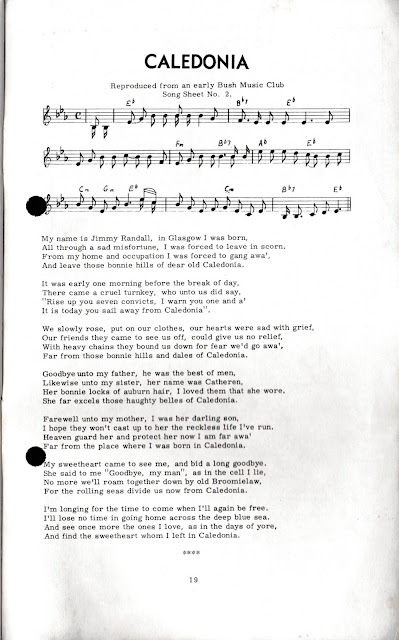 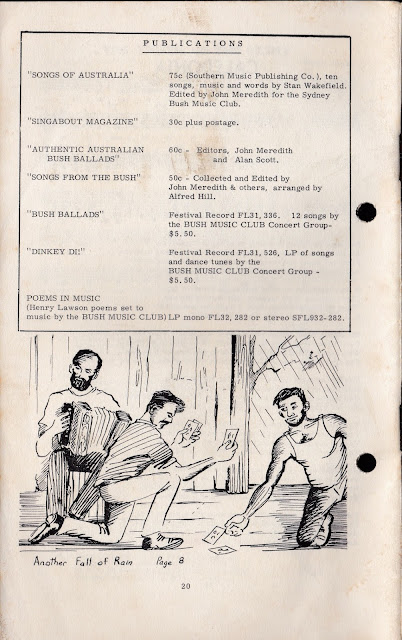