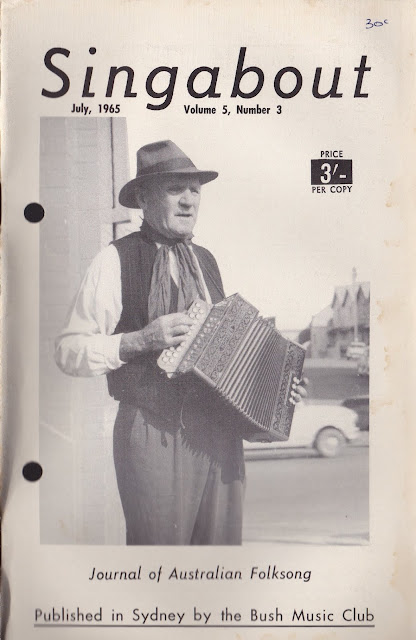 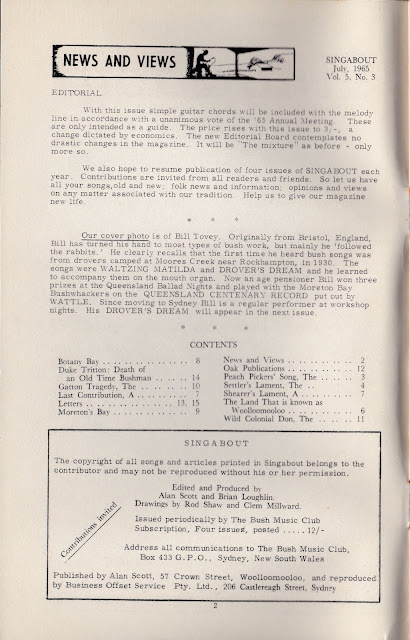 2.  Singabout, Volume 5(3), July 1965 - NEWS AND VIEWS - Editorial. With this issue simple guitar chords will be included with the melody line in accordance with a unanimous vote of the '65 Annual Meeting ... price rises with this issue ... We also hope to resume publication of four issues of SINGABOUT each year. Contributions are invited ...  Our cover photo is of Bill Tovey ... he clearly remembers the first time he heard bush songs was from drovers camped at Moores Creek near Rockhampton in 1930 ...  Waltzing Matilda and Drover's Dream and he learned to accompany them with his mouth organ. Now an age pensioner Bill won three prizes at the Queensland Ballad Nights and played with the Morton Bay Bushwhackers on the Queensland Centenary Record put out by wattle. Since moving to Sydney Bill is a regular performer at workshops nights. His Drovers Dream will appear in the next issue.  CONTENTS. Singabout is Edited and Produced by Alan Scott and Brian Loughlin. Drawings by Rod Shaw and Clem Millward. 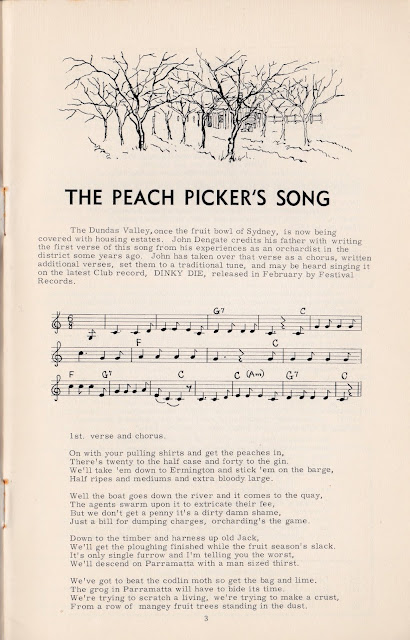 3.  Singabout, Volume 5(3), July 1965 - THE PEACH PICKER'S SONG. The Dundas Valley, once the fruit bowl of Sydney is now being covered with housing estates. John Dengate credits his father with writing the first verse of this song from his experiences as an orchardist in the district some years back. John had taken over the verse as a chorus, written additional verses, set them to a traditional tune, and can be heard singing it on the latest Club record, DINKY DI, released in February by Festival Records. 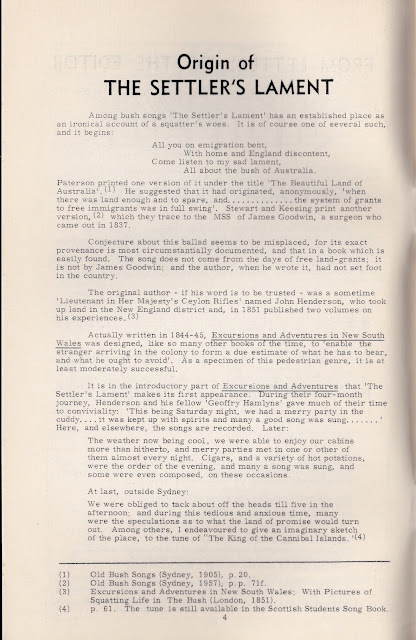 4.  Singabout, Volume 5(3), July 1965 - ORIGINS OF THE SETTLER'S LAMENT. Among Bush Songs The Settler's Lament has an established place as an ironical account of a squatter's woes ... The original author - if his word is to be trusted - was a sometime 'Lieutenant in Her Majesty's Ceylon Rifles' named John Henderson who took up land in the New England District and in 1851 published two volumes on his experiences ... 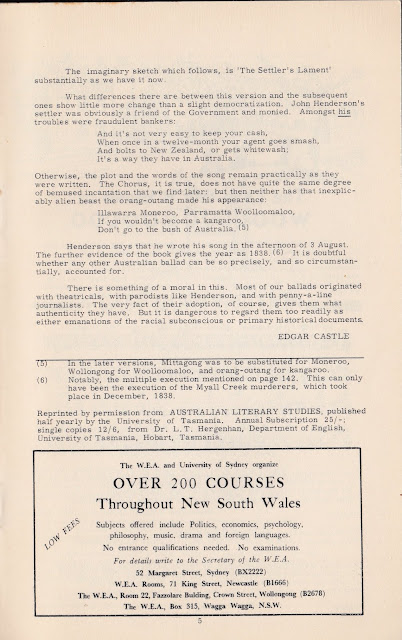 5.  Singabout, Volume 5(3), July 1965 - ORIGINS OF THE SETTLER'S LAMENT. (cont) by Edgar Castle.  ... Henderson said he wrote his song on the afternoon of 3 August  .... 1838.  Reprinted by permission from AUSTRALIAN LITERARY STUDIES, University of Tasmania.  Ad for WEA & University of Sydney courses. 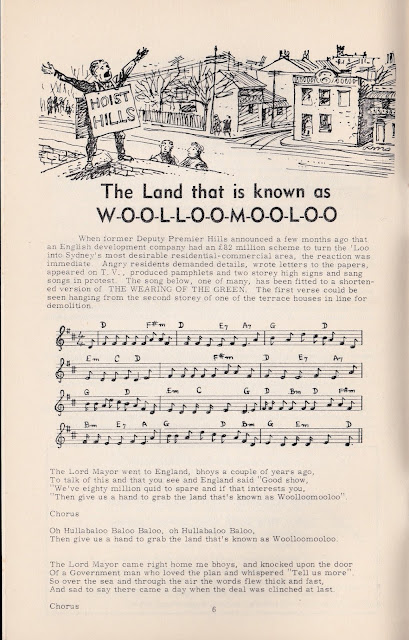 6.  Singabout, Volume 5(3), July 1965 - THE LAND THAT IS KNOWN AS WOOLLOOMOOLOO When former Deputy Premier Hills announced a few months ago that an English development company had an £82 scheme to turn the 'Loo into Sydney's most desirable residential-commercial area, the reaction was immediate. Angry residents demanded details ...  and sang songs in protest ... the first verse could be seen hanging from the second storey of one of the terrace houses in line for demolition.  (drawing by RMS, Rod Shaw) 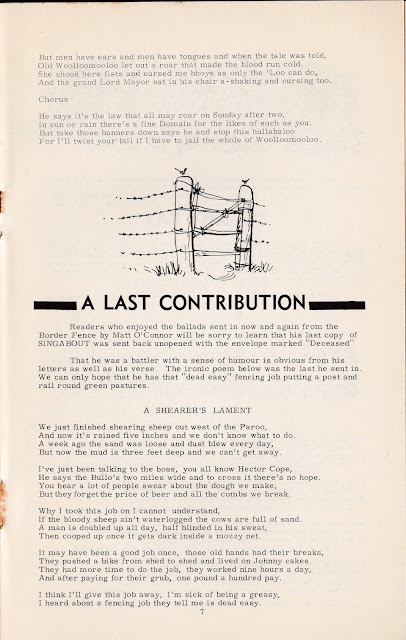 7.  Singabout, Volume 5(3), July 1965 -  THE LAND THAT IS KNOWN AS  WOOLLOOMOOLOO  (Cont)    A LAST CONTRIBUTION - Readers who enjoyed the ballads sent in now and again from the Border Fence by Matt O'Connor will be sorry to learn that his last copy of SINGABOUT was sent back unopened with the envelope marked "Deceased." The ironic poem below was the last he sent in. A Shearer's Lament. 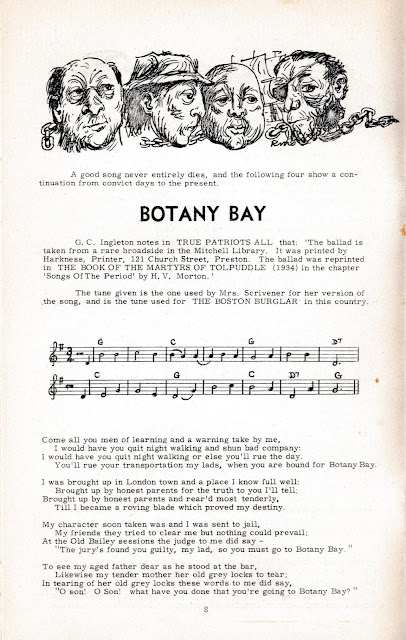 8.  Singabout, Volume 5(3), July 1965 - A good song never entirely dies, and the following four show a continuation from convict days to the present.  BOTANY BAY.  G.C. Ingleton notes in TRUE PATRIOTS ALL that: The ballad is taken from a rare broadside in the Mitchell library ... The tune given is the one used by Mrs Scrivener ... 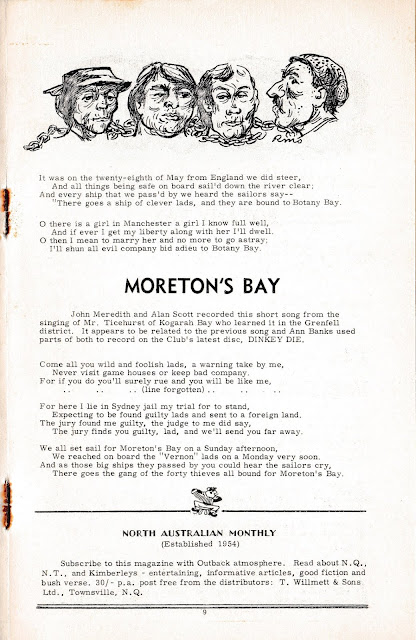 9.  Singabout, Volume 5(3), July 1965 - BOTANY BAY.  (Cont)  MORTON'S BAY John Meredith and Alan Scott recorded this short song from the singing of Mr Ticehurst of Kogarah Bay who learned it in the Grenfell district. It appears to be related to the previous song and Ann Banks used parts of both to record on the Club's latest disk DINKEY DI. (drawing RMS, Rod Shaw) Ad for NORTH AUSTRALIAN MONTHLY 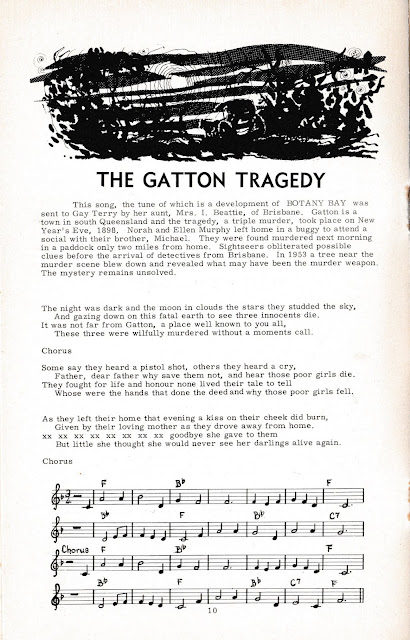 10.  Singabout, Volume 5(3), July 1965 - THE GATTON TRAGEDY. This song, the tune of which is a  development of BOTANY BAY was sent to Gay Terry by her aunt, Mrs I Beattie if Brisbane. 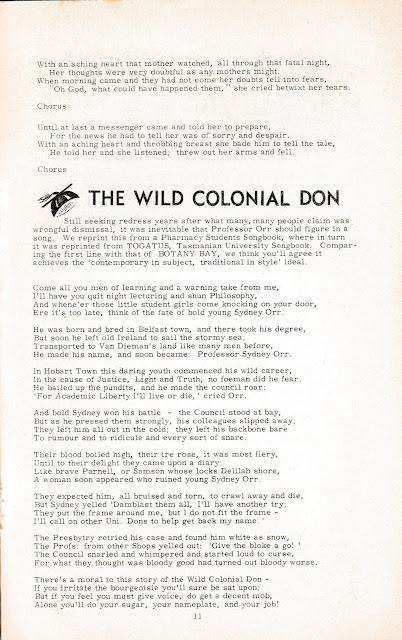 11.  Singabout, Volume 5(3), July 1965 - THE GATTON TRAGEDY. (cont)  THE WILD COLONIAL DON. Still seeking redress years after what many, many people claim was wrongful dismissal, it was inevitable Professor Orr should  figure in a song.  We reprint this from a Pharmacy Students Songbook ... we think you'll agree it achieves the "contemporary in subject, traditional in style ideal." 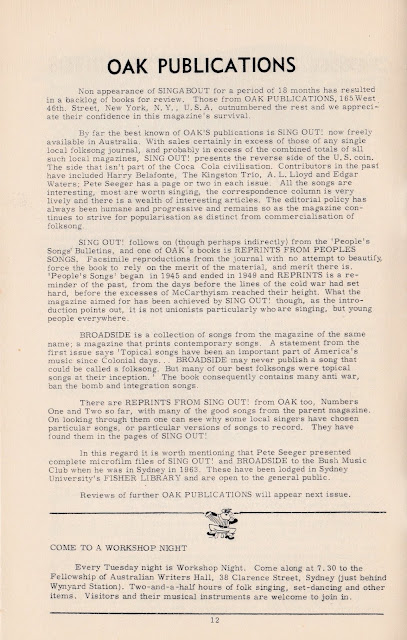 12.  Singabout, Volume 5(3), July 1965 - OAK PUBLICATIONS. Non appearance of SINGABOUT for a period of 18 (sic) months has resulted in a backlog of publications for review.  SING OUT! is now freely available in Australia. REPRINTS FROM PEOPLE'S SONGS  ... begun in 1945 and ended in1949.  BROADSIDE ... contemporary songs.  REPRINTS FROM SING OUT! Numbers One and Two. In this regard it is worth mentioning that Pete Seeger presented complete microfilm files of SING OUT! and BROADSIDE to the Bush Music Club when he was in Sydney in 1963. These have been lodged in Sydney University's FISHER LIBRARY and are open to the general public.  COME TO A WORKSHOP NIGHT. 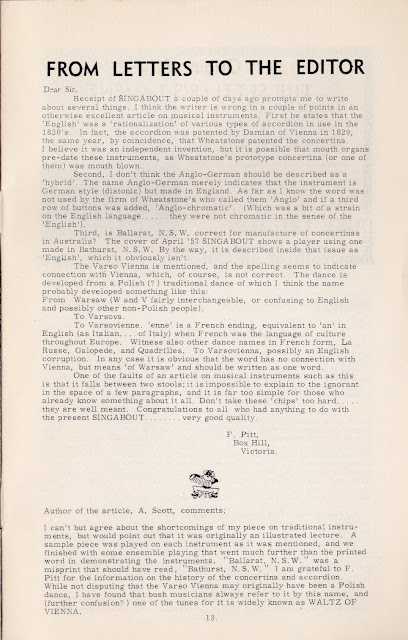 13.  Singabout, Volume 5(3), July 1965 - FROM LETTERS TO THE EDITOR. Letter from F. Pitt, Box Hill, Vic, about Alan Scott's article on Bush Instruments. Alan agreed but pointed out it was originally an illustrated lecture. 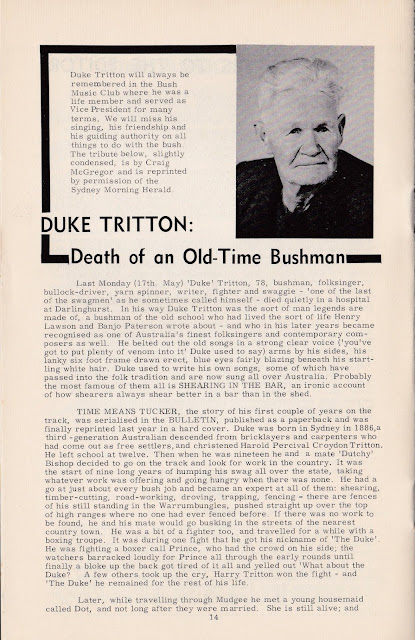 14.  Singabout, Volume 5(3), July 1965 - DUKE TRITTON; Death of an Old-Time Musician. The tribute below, slightly condensed, is by Craig McGregor is reprinted by permission of the Sydney Morning Herald. 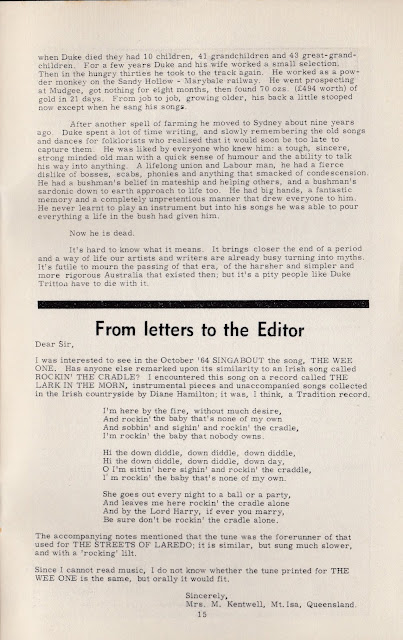 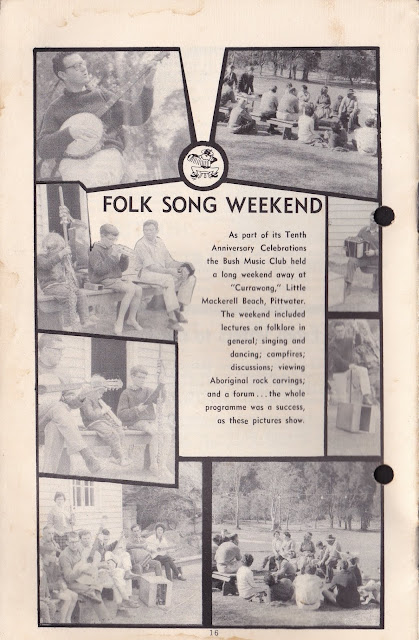