The second (the red book) is missing pages from the front, with the first dated page from the minutes of the 26th April 1957 General meeting, & the final minutes in the book are from the 1978 Annual General Meeting.

Minutes of the Bush Music Club, 14th October 1954 to 11th March, 1955 The minutes of the first 5 months of the Club are in a cheap school exercise book, written in pencil and pen and ink (ballpoint pens were new & expensive!) Alan Scott was elected as Secretary/Treasurer so probably wrote them up. They finish with the minutes for 11th March, then the date of the next meeting, & the following pages have been torn out.

Red covered Minutes books have been used for a long time to keep Minutes safe & accessible, so our Red book probably continued on from the first Minutes book (a logical reason for not filling up the exercise book), but as the earliest pages are missing we'll never know. As some of the loose pages were out of order, I numbered every page.

The incomplete Minutes of the Conference held on the 9th of February (1957), at the Esperanto Hall, Milson's Pt., Sydney were included in front of the Red Minutes book, although they had never been pasted in. Perhaps the last page had been pasted in & the weight of these minutes tore them from the page????? (another supposition, not a fact.)

Neither the missing page/s from the Conference Minutes, nor the missing pages from the Red Minutes book have been found in Archives, so we have no record of meetings between 11th March 1955 and the incomplete minutes of the General Meeting on 26th April 1957.

Thanks to Ralph Pride for making scans of the Red Minutes book.
=====================
First surviving page of the Red minutes book.
page 00A The Three Bushwhackers - our aims and constitution (which was discussed at 26th June 1957 General Meeting.
note written by Secretary Lorna Lovell - The group have since taken the name of "The Ramble-eers"  16/10/58  L.Lovell 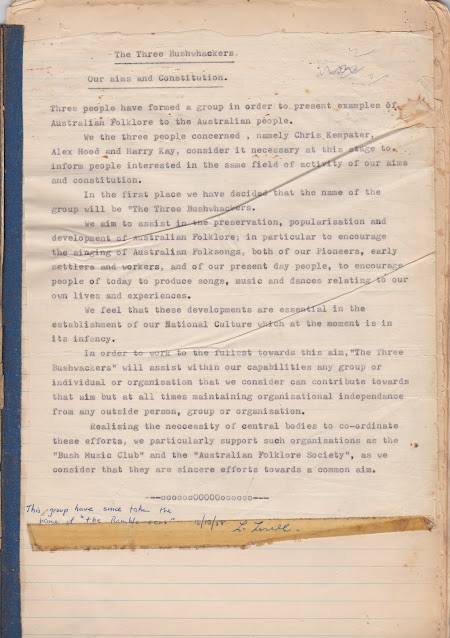 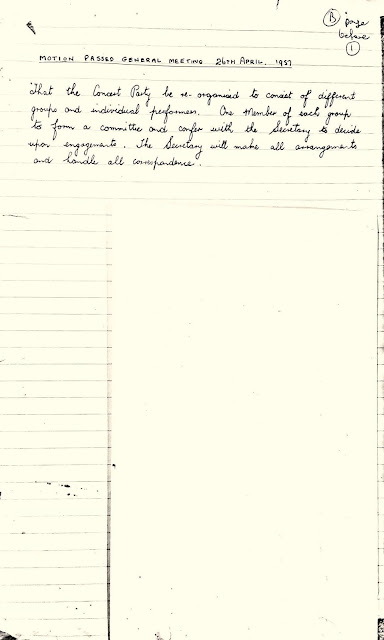 page 001. Minutes of the General Meeting of The Bush Music Club Friday 26th June, 1957 - 1. Correspondence ... letter from Pete Seeger ...  2. Business arising from Correspondence  3. Constitution of Ramble-eers  (discussion - as Ramble-eers have their own constitution they can't be part of Concert Party 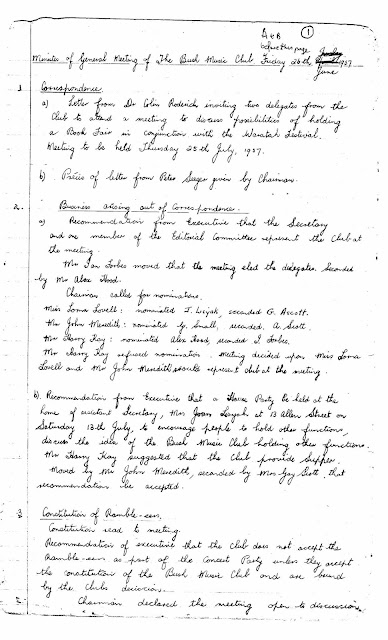 page 002. Minutes of the General Meeting of The Bush Music Club Friday 26th June, 1957 - 3.  Constitution of Ramble-eers  (cont)  ...The chairman stated he would give his ruling at the General meeting of 26th July, 1957   4. Motion ... to add a clause to the Constitution   5. Election of Three Trustees - Duke Tritton, John Meredith & Alan Scott elected  6. Notice of Motion given by Mr Graham Ascott 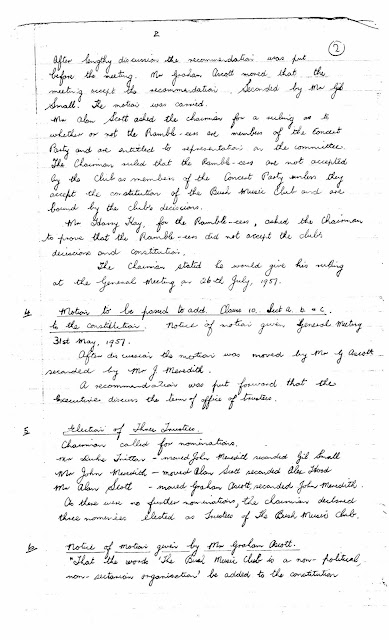 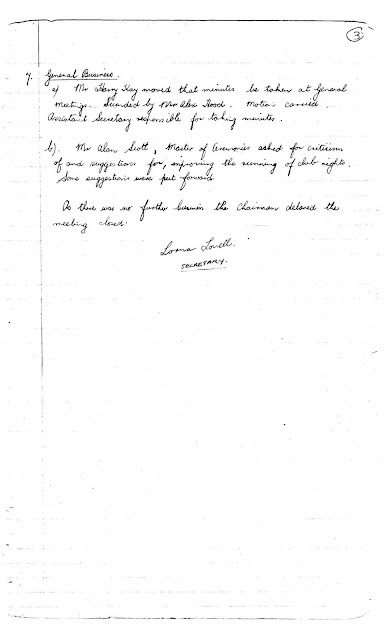 page 005  Minutes of the General Meeting of The Bush Music Club Friday 3rd July (1957) - 1. Correspondence - 2. Business arising.  3. Report from Executive following discussion on terms of office of Trustees.  4. Ruling of President re position of Ramble-eers in the Concert Party. Ruling read to meeting. Moved by Graham Ascott, seconded by Chris Kempster that the ruling be accepted by the meeting.  5. Suggestions from Executive a way of raising funds for Pete Seeger   6. Motion to be passed re addition to constitution 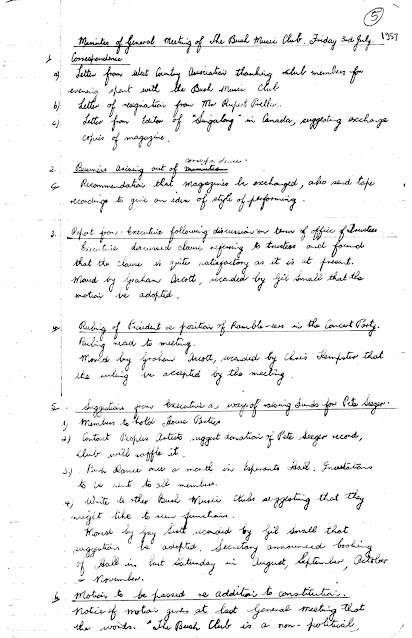 page 006. Minutes of the General Meeting of The Bush Music Club Friday 3rd July (1957)  6. Motion to be passed re addition to constitution (cont)   7. Recommendations from the executive that the meeting elect an Assistant Master of Ceremonies and an assistant to help handle sale of publications - John Meredith & Fran Shaw   8. Recommendation from Executive that the organising committee for the Waratah Festival.  9. General Business - 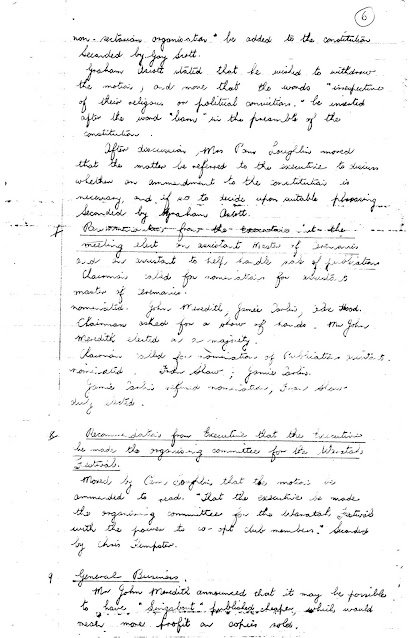 page 007  Minutes of the General Meeting of The Bush Music Club Friday 3rd July (1957)   9. General Business (cont)
RULING ON CONSTRUCTION OF COMMITTEE CONTROLLING THE BUSH MUSIC CLUB CONCERT PARTY ... the representatives of the Rambl-eers cannot now have any legal standing on the committee ...  Brian Loughlin President 26/7/57 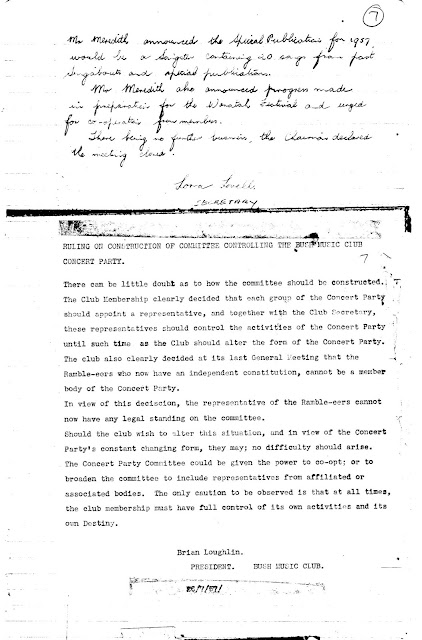 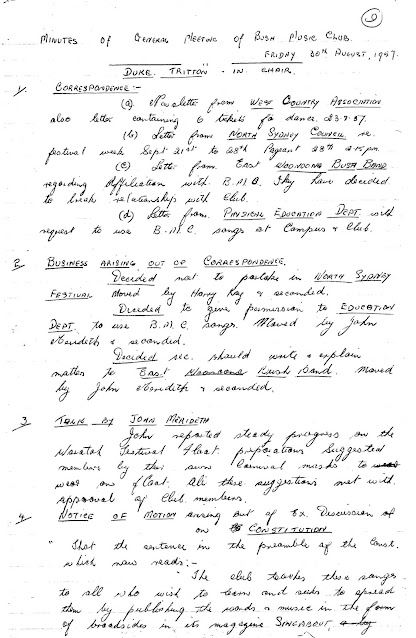 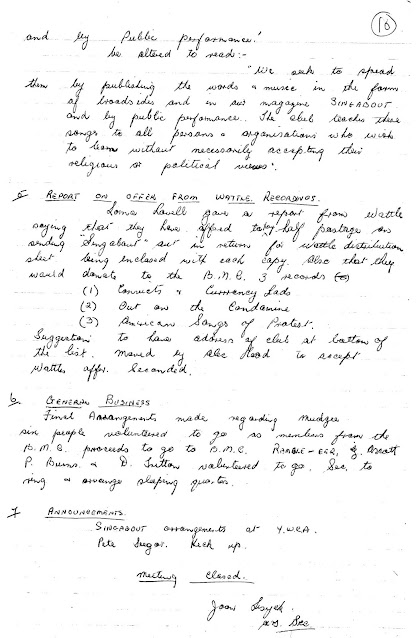 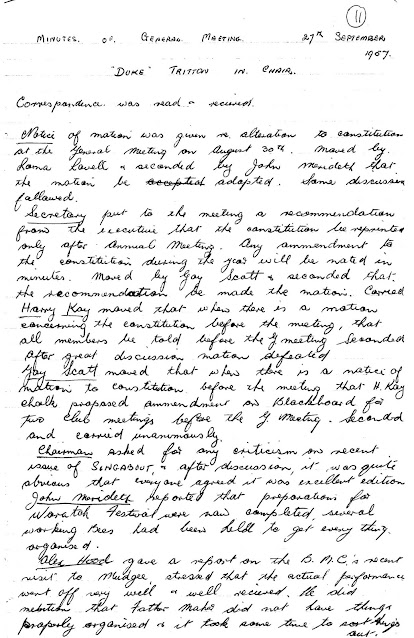 page 012  - Minutes of General Meeting of Bush Music Club,  27th September, 1957 Alan Scott ... talk on recent visit to Bush Music Club and the Brisbane Singers while he was on holiday ... not losing sight of our goal ... popularising Australian folk songs.  meeting closed 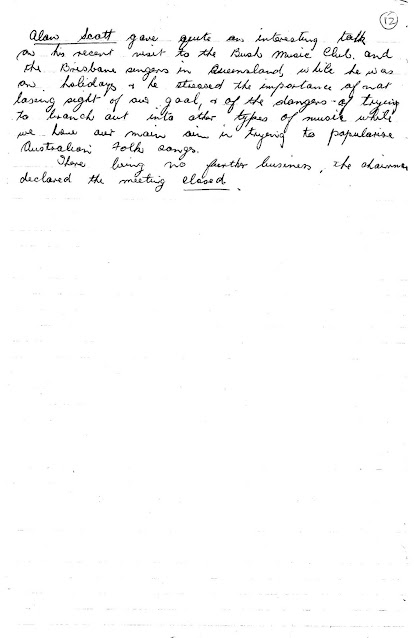 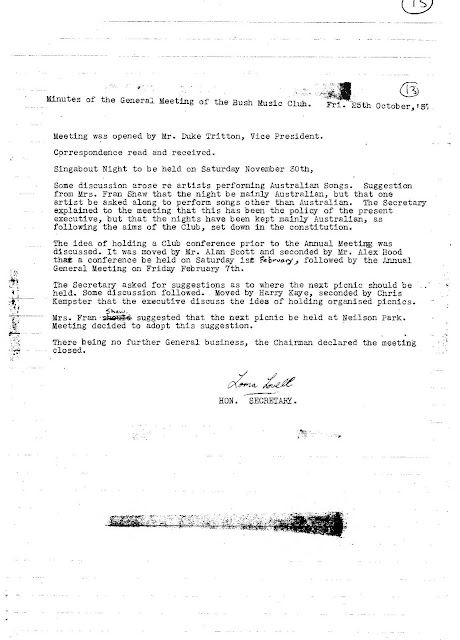 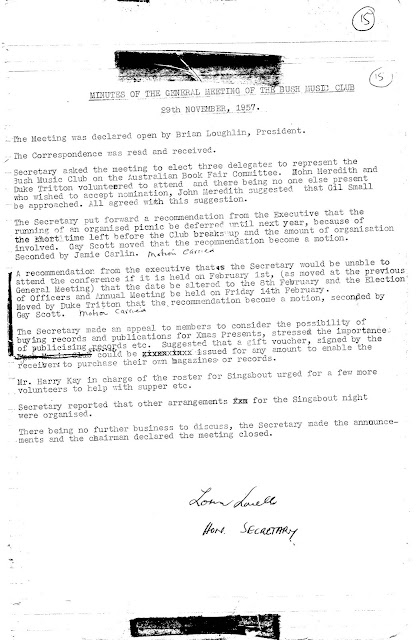 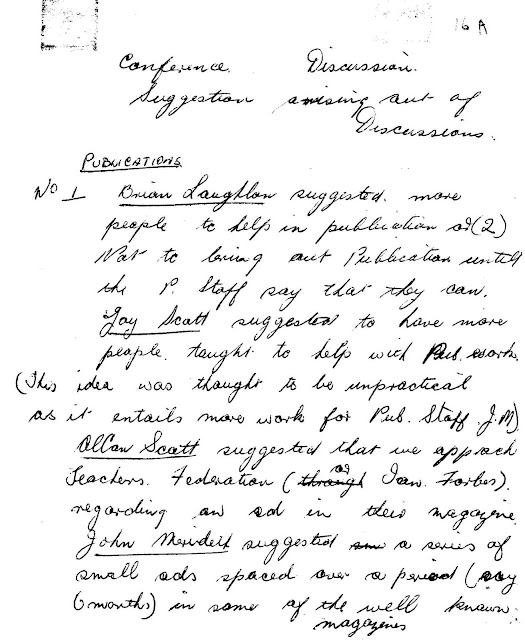 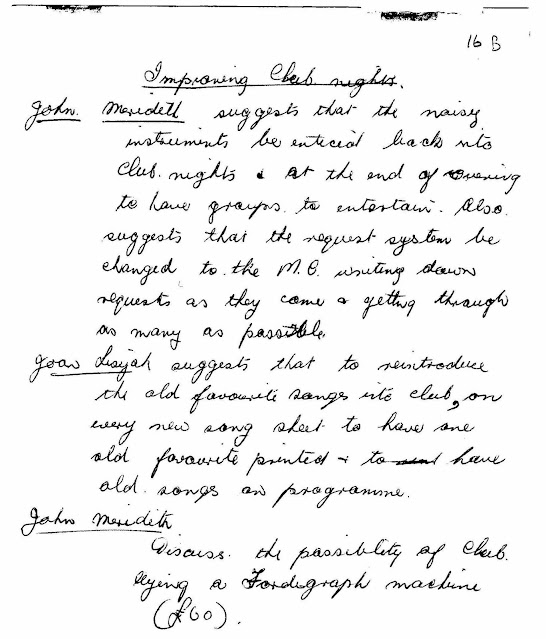 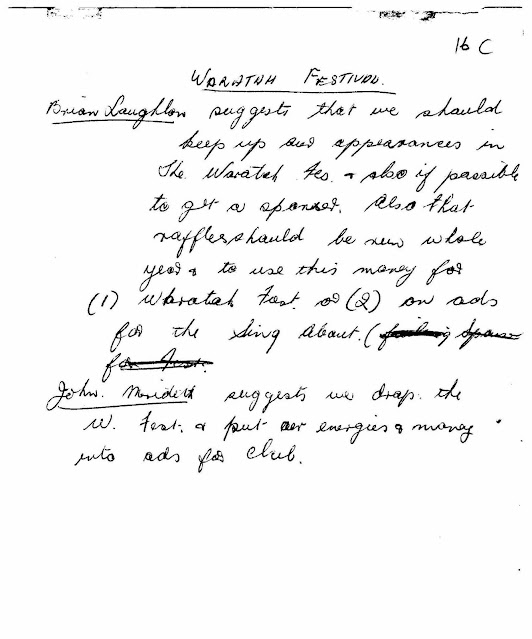 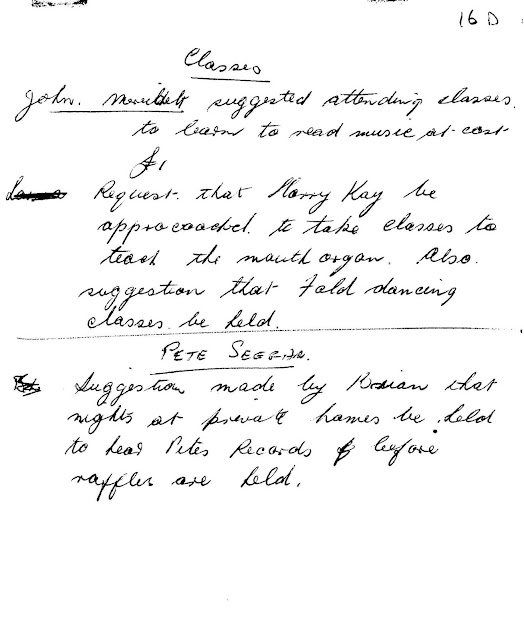 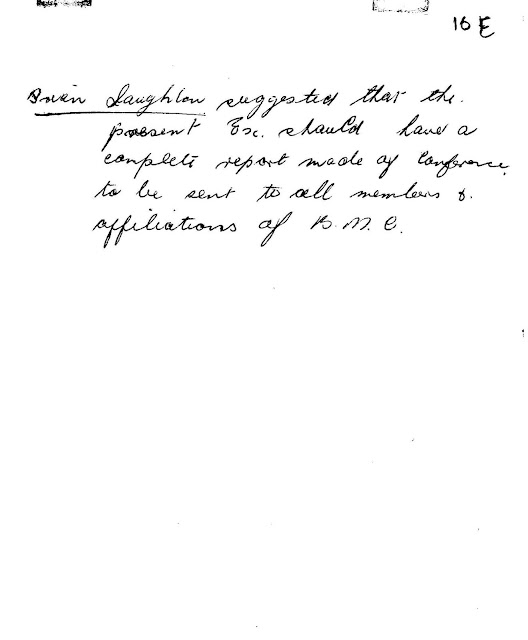 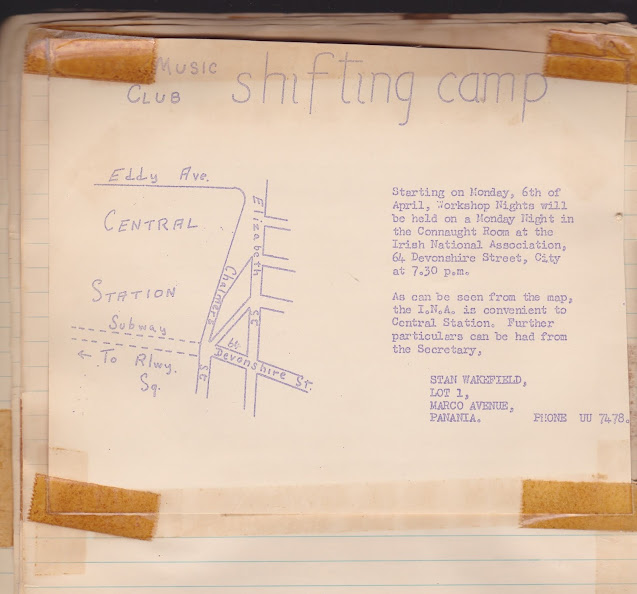 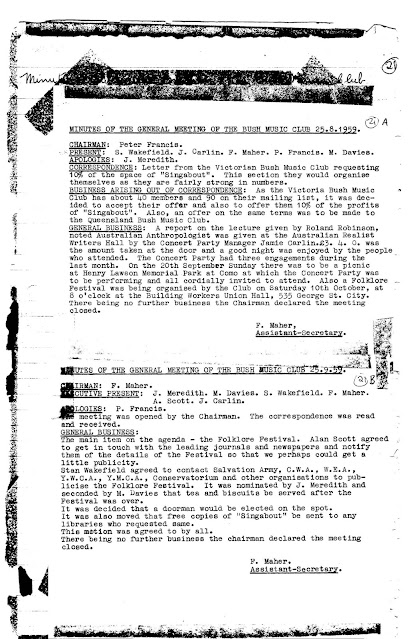 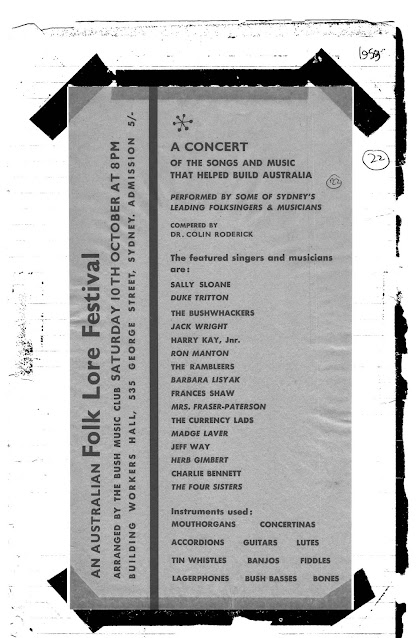 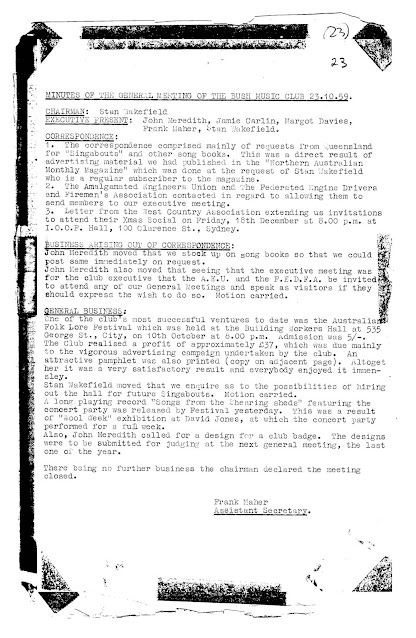