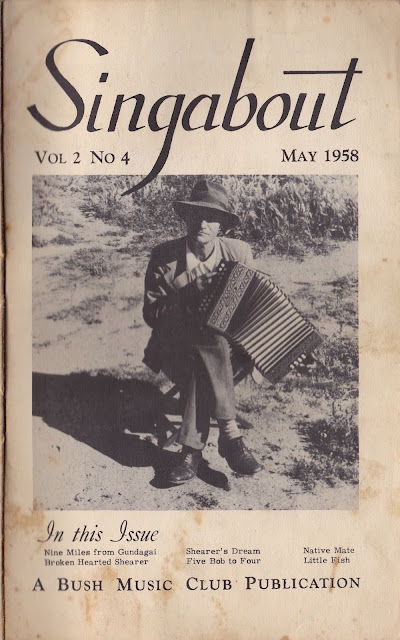 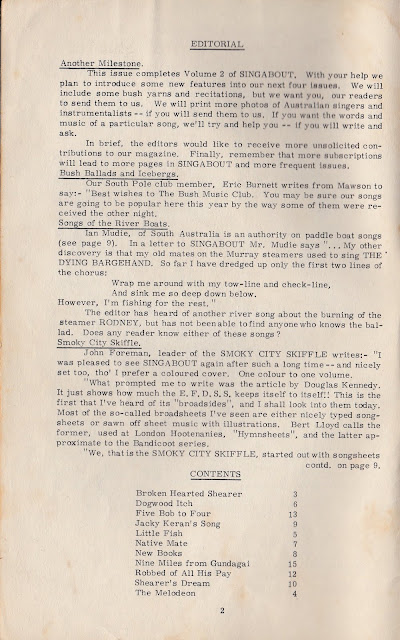 2.   Singabout, Volume 2(4), May 1958 - EDITORIAL - Another Milestone. This issue completes Volume 2 of Singabout.  Bush Ballads & Icebergs. Our South Pole Club member, Eric Burnett writes from Mawson to say "Best wishes to the Bush Music Club. You may be sure our songs are going to be popular here this year by the way some of them were received the other night".  Songs of the River Boats. Ian Mudie, of South Australia is an authority of paddle boat songs. In a letter to SINGABOUT Mr Mudie says " ... my other discovery is that my old mates on the Murray steamers used to sing THE DYING BARGEHAND.  So far I have dredged up only the first two lines -Wrap me around with my tow-line and check-line And sink me so deep below ... However I am fishing for the rest. The editor has heard of another river song about the burning of the steamer RODNEY, but has not been able to find anyone who knows the the ballad. Does any reader know either of these songs?  Smoky City Skiffle.  John Foreman, leader of the Smoky City Skiffle writes - I was pleased to see SINGABOUT again after such a long time ... What prompted me to write was the article by Douglas Kennedy. It just shows how much the E.F.D.S.S. keeps to itself!!  This is the first I've heard of it's broadsides ...   (cont on page 9)  CONTENTS 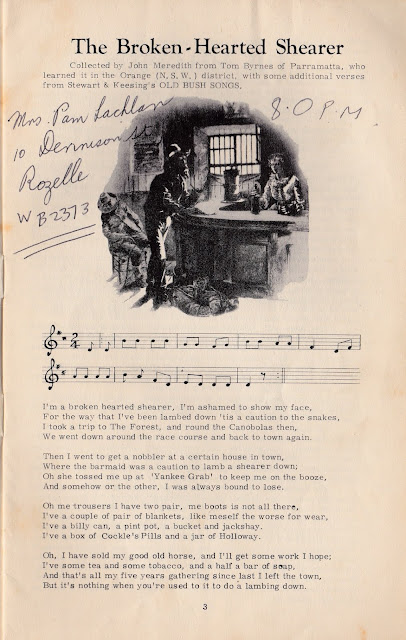 3.   Singabout, Volume 2(4), May 1958 - The Broken-Hearted Shearer. Collected by John Meredith from Tom Byrnes of Parramatta, who learned it in the Orange (N.S.W.) district, with some additional verses from Stewart & Keesing's OLD BUSH SONGS. 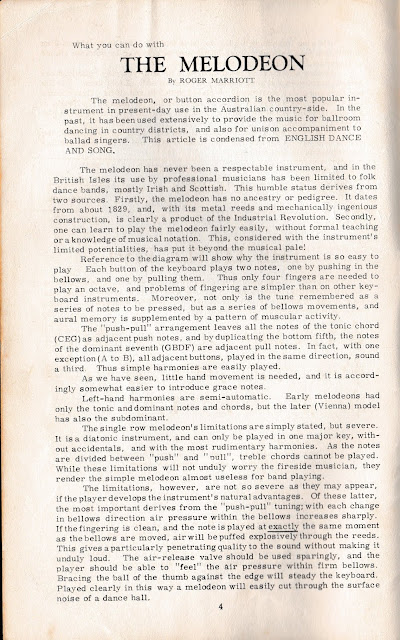 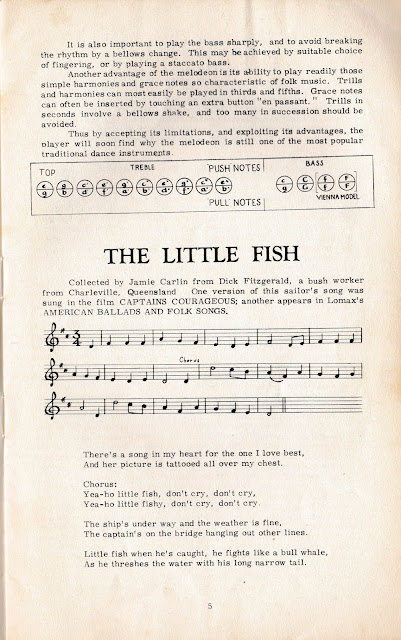 7.   Singabout, Volume 2(4), May 1958 - What you can do with THE MELODEON by Roger Marriott (cont) THE LITTLE FISH Collected by Jamie Carlin from Dick Fitzgerald, a bush worker from Charleville, Queensland. One version of this sailor's song was sung in the film CAPTAINS COURAGEOUS; another appears in Lomax's AMERICAN BALLADS AND FOLK SONGS. 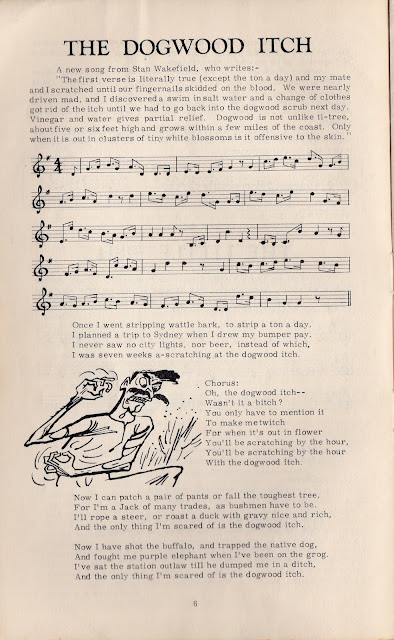 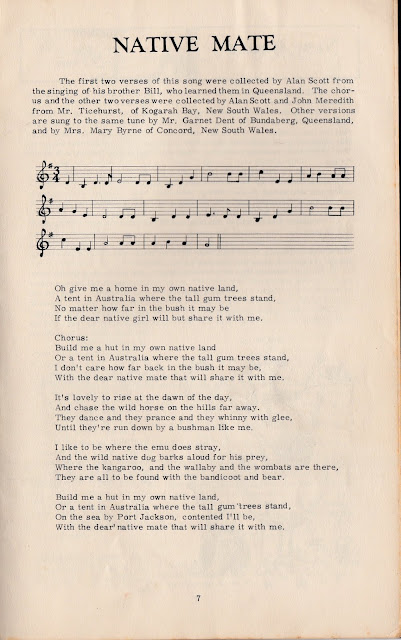 7.   Singabout, Volume 2(4), May 1958 - NATIVE MATE. The first two verses of this song were collected by Alan Scott from his brother Bill, who learned them in Queensland. The chorus and the other two verses were collected by Alan Scott and John Meredith from Mr Ticehurst of Kogarah Bay New South Wales. Other versions are sung to the same tune by Mr Garnet Dice of Bundaberg, Queensland, and by Mrs Mary Byrne of Concord, New South Wales. 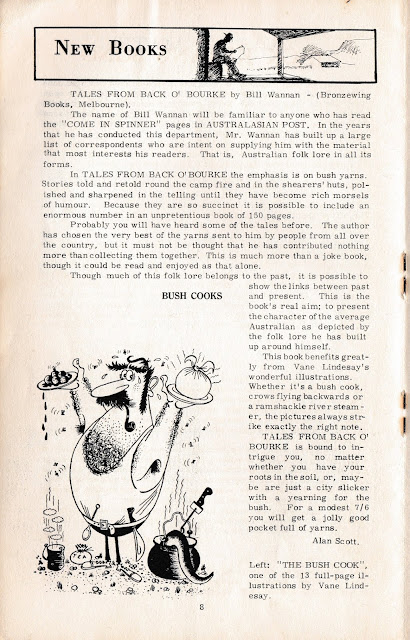 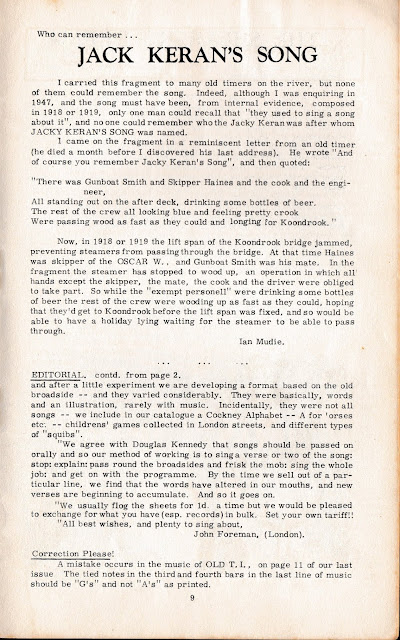 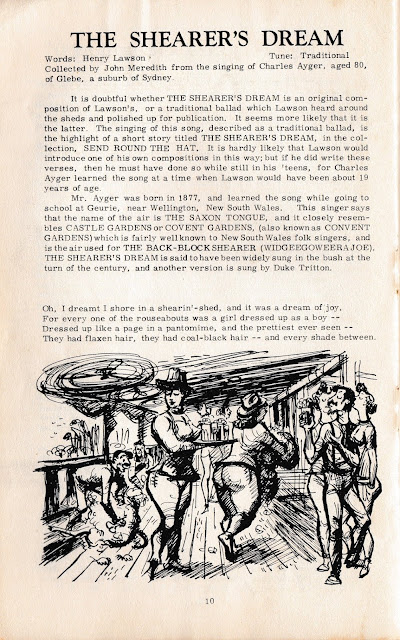 10.   Singabout, Volume 2(4), May 1958 - THE SHEARER'S DREAM, words Henry Lawson, tune Traditional. Collected by John Meredith from the singing of Charles Ayger, aged 80, of Glebe, a suburb of Sydney. It is doubtful whether THE SHEARER'S DREAM is an original composition of Lawson's, or a traditional ballad which Lawson heard round the sheds and polished for publication ... but if he did write these verses, then he must have done so while in his teens ... Mr Ayger was born in 1877, and learned the song while going to school ... 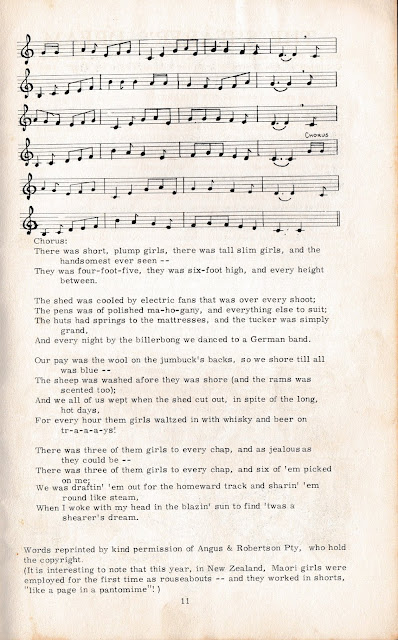 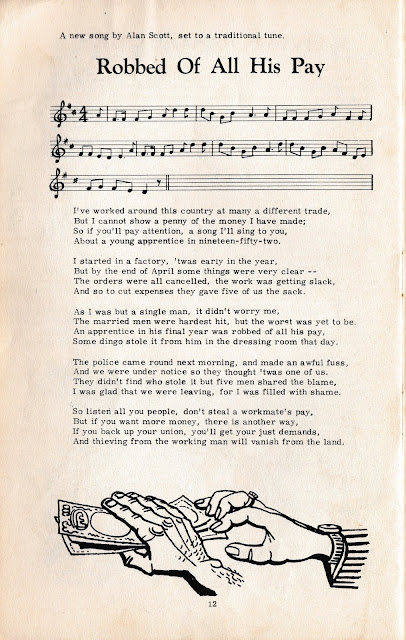 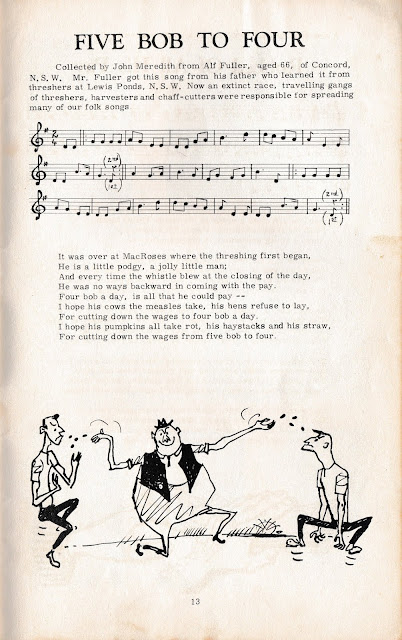 13.   Singabout, Volume 2(4), May 1958 - FIVE BOB TO FOUR.  Collected by John Meredith from Alf Fuller, aged 66 of Concord, NSW.  Mr Fuller got this song from his father, who learned it from threashers at Lewis Ponds, NSW. Now an extinct race, travelling gangs of threashers, harvesters and chaff-cutters were responsible for spreading many of our folk songs. 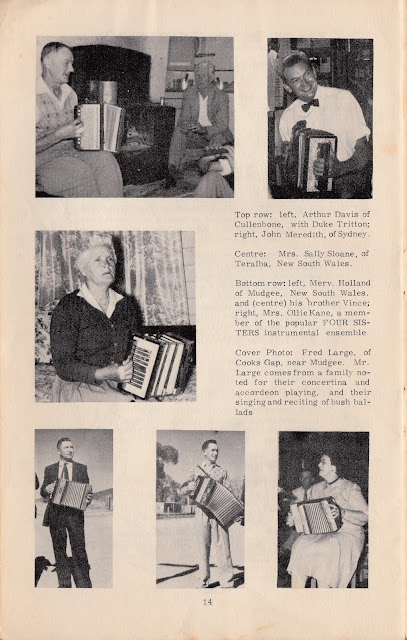 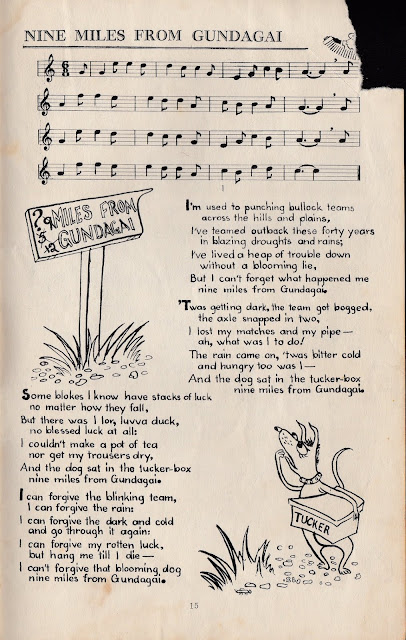 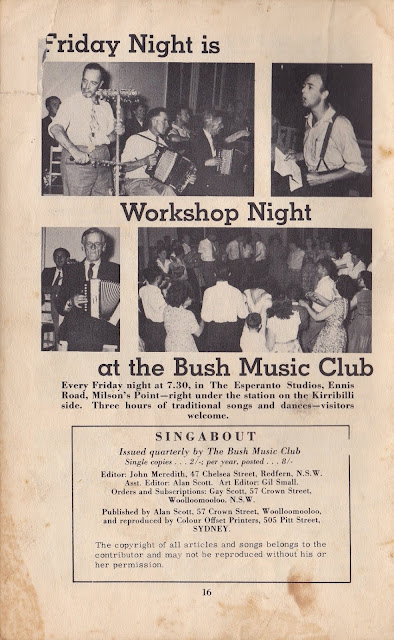