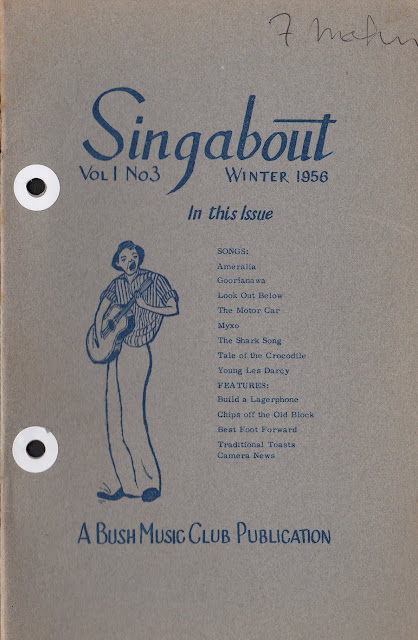 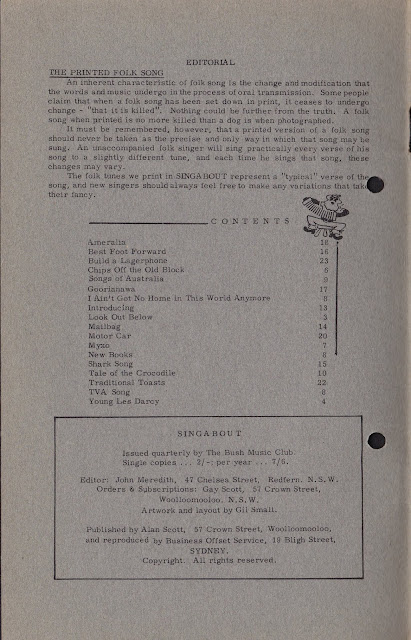 2. Singabout, Volume 1(3), Winter 1956 - EdDITORIAL. The Printed Folk Song. An inherent characteristic of folk song is the change and modification that the words and music undergo in the process of oral transmission. Some people claim that when a folk song has been set down in print, it ceases to undergo  change - "that it is killed".  Nothing could be further from the truth. A folk song when printed is no more dead than a dog is when photographed.  It must be remembered, however, that a printed version of a folk song should never be taken as the precise and only way in which that song may be sung.  An unaccompanied folk singer will sing practically every verse of his song to a slightly  different tune, and each time he sings that song, these changes may vary. The folk tunes we print in SINGABOUT represents a "typical" verse of the song, and new singers should always feel free to make any variations that take their fancy.  CONTENTS.  SINGABOUT.  Issued quarterly. Editor John Meredith. Orders & Subscriptions Gay Scott.  Artwork and layout Gil Small.  Published by Alan Scott. 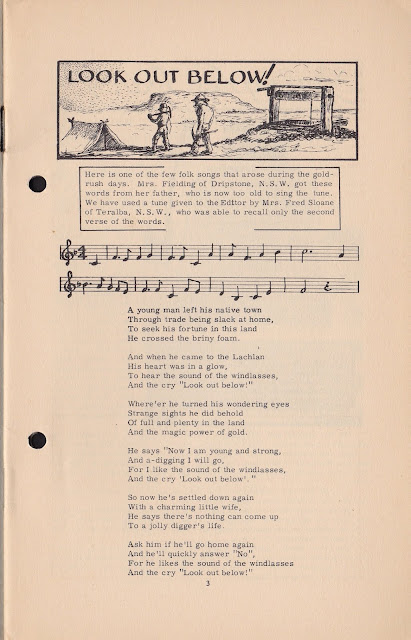 3.  Singabout, Volume 1(3), Winter 1956 - Look out below! Mrs Fielding of Dripstone, NSW, got these words from her father , who is now too old to sing the tune. We have used the tune given to the Editor by Mrs. Fred Small of Teralba, NSW, who was able to recall only the second verse of the words. 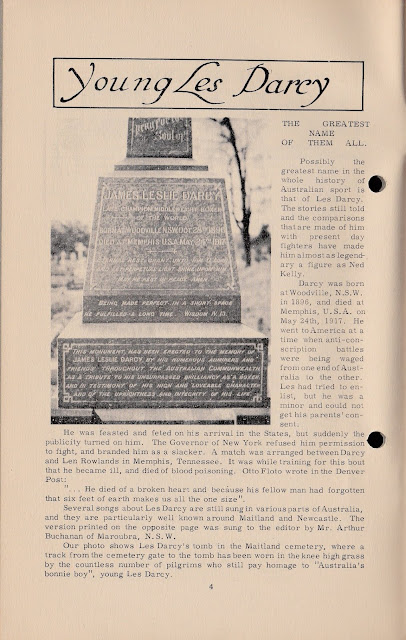 4. Singabout, Volume 1(3), Winter 1956 - Young Les Darcy The Greatest name of them all.  1996-1917 ... Several songs about Les Darcy are still sung in various parts of Australia,  and they are particularly well known around Maitland and Newcastle. The version printed on the page opposite was sung to the editor by Mr Arthur Buchanan of Maroubra, N.S.W. 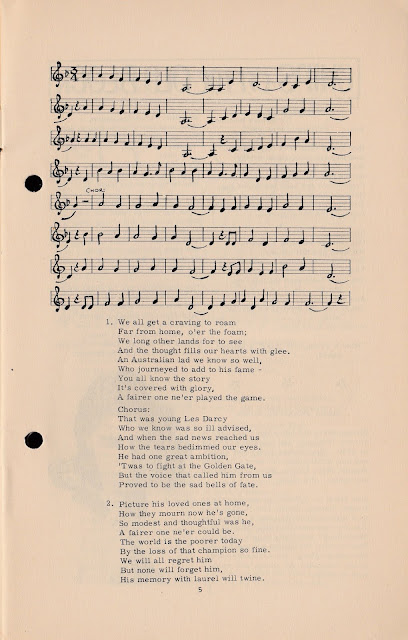 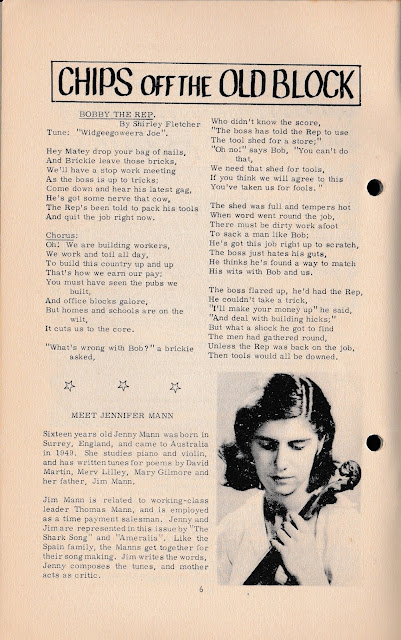 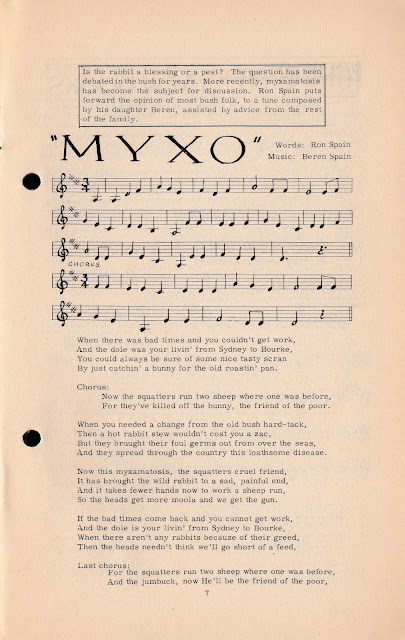 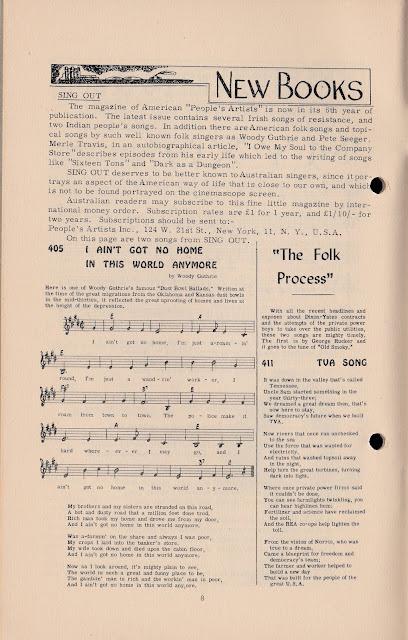 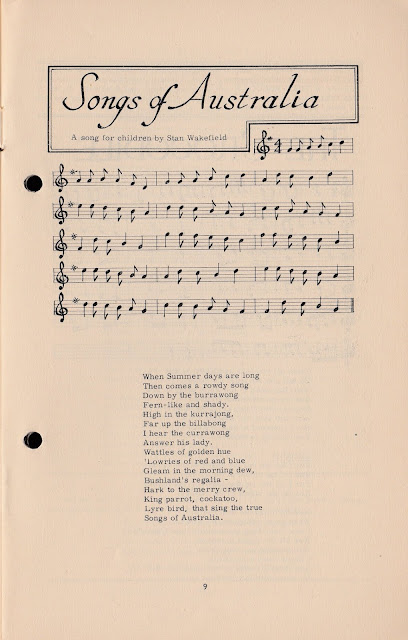 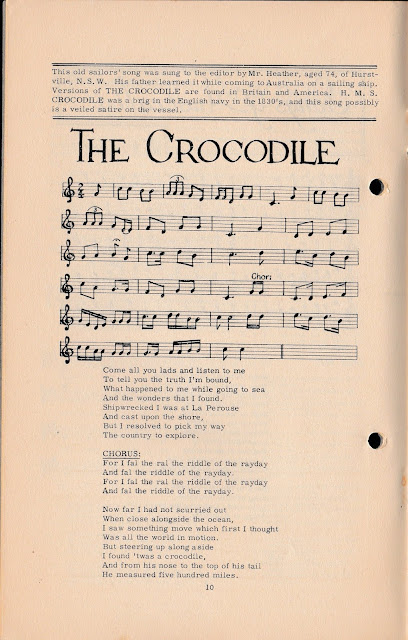 10. Singabout, Volume 1(3), Winter 1956 - The Crocodile, sung to the editor by Mr Heather, aged 74 of Hurstville, N.S.W.  His father learned it while coming to Australia on a sailing ship. Versions of The Crocodile are found in Britain and America.  HMS Crocodile was a brig in the English navy in the 1830s, and this song possibly is a veiled satire on the vessel. 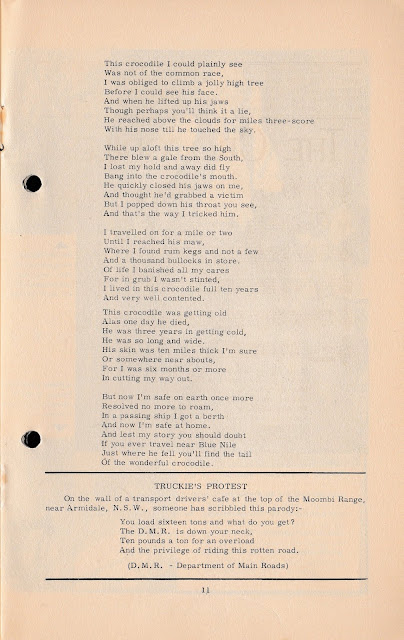 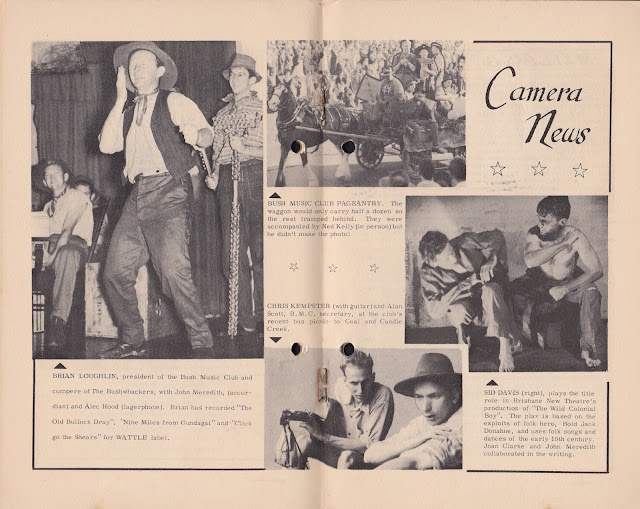 12-13. Singabout, Volume 1(3), Winter 1956 - CAMERA NEWS -  Brian Loughlin, President of the Bush Music Club and compare of The Bushwhackers, with John Meredith (accordion) and Alec Hood (lagerphone).  Brian has recorded "The Old Bullock Dray", "Nine Miles from Gundagai", and "Click go the Shears" for WATTLE label.  Bush Music Club Pageantry. The waggon would only carry half a dozen so the rest tramped behind. They were accompanied by Ned Kelly (in person) but he didn't make the photo (Waratah festival)  CHRIS KEMPSTER (with guitar) and Alan Scott, BMC Secretary, at the Club's recent bus picnic to Coal and Candle Creek. SID DAVIS (right) plays the title role in Brisbane New Theatre's production of "The Wild Colonial Boy".  The play is based on the exploits of folk hero, Bold Jack Donahoe, and uses folk songs and dances of the early 19th Century. Joan Clarke and John Meredith collaborated in the writing. 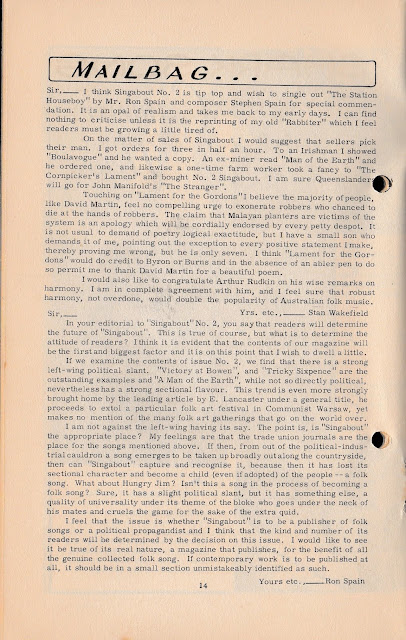 14. Singabout, Volume 1(3), Winter 1956 -  MAILBAG  Letter from Stan Wakefield praising The Station Houseboy & agreeing with Arthur Rankin about harmony.  Letter from Ron Spain regarding Singabout's "strong left wing political slant" ... I am not against the left-wing having it's say ... trade union journals are the place for the songs mentioned above ... I feel the issue is whether Singabout is to be a publisher of folk songs or a political propagandist ... I would like to see it be true to it's real nature, a magazine that publishes  ... the genuine folk song ... " 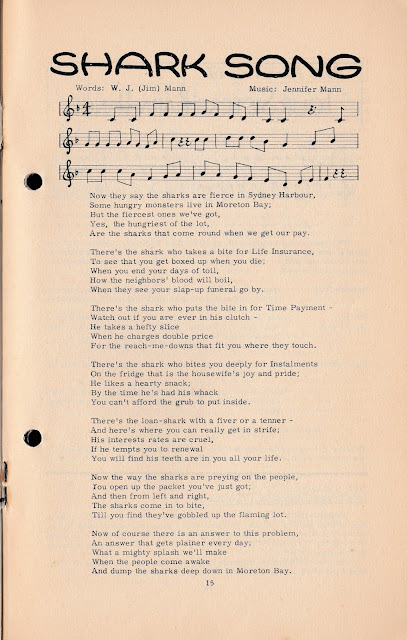 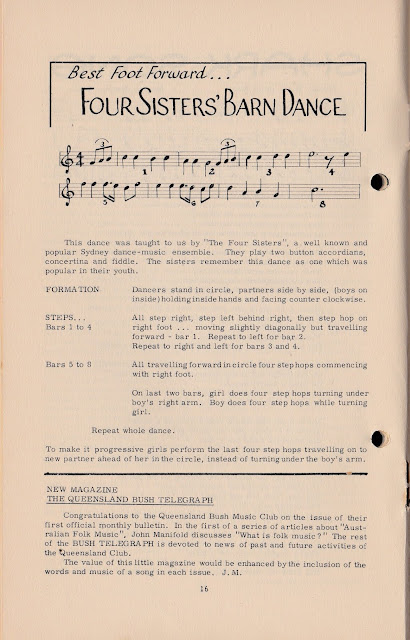 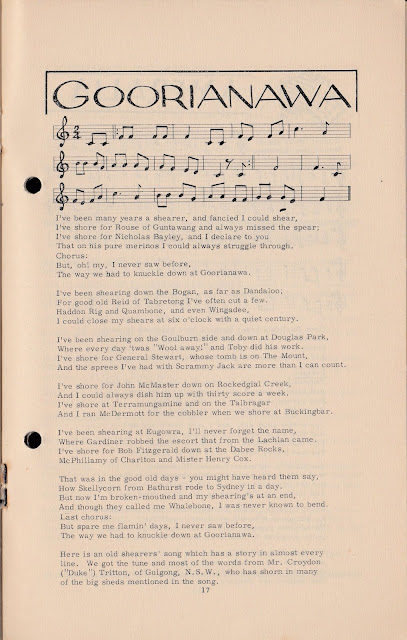 17. Singabout, Volume 1(3), Winter 1956 - Goorianawa, an old shearers' song collected from Mr. Croydon ("Duke") Tritton of Gulgong, N.S.W. who has shorn in many of the big sheds mentioned in the song. 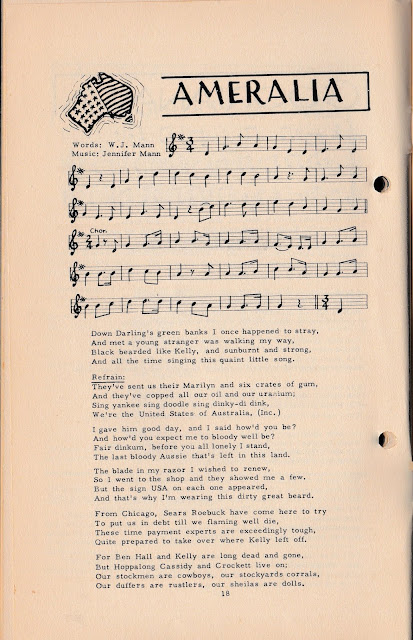 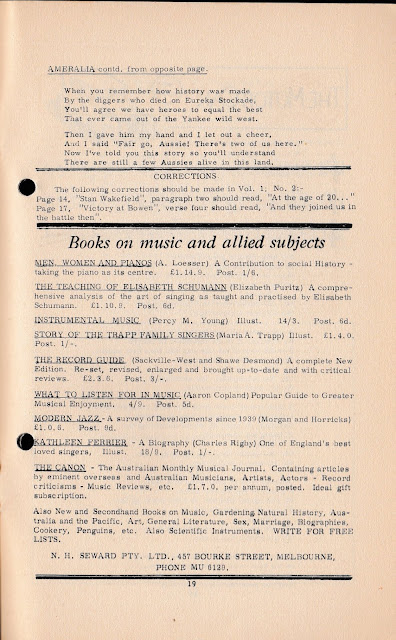 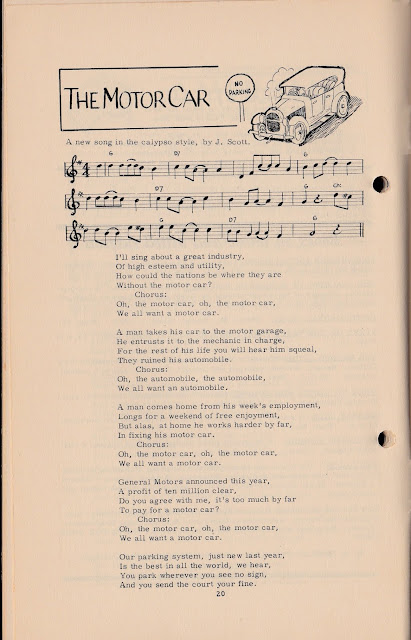 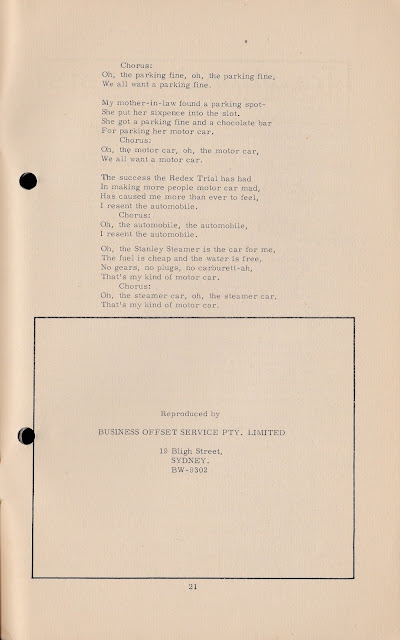 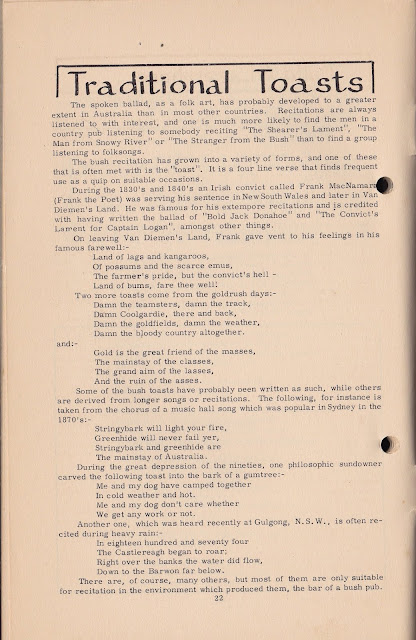 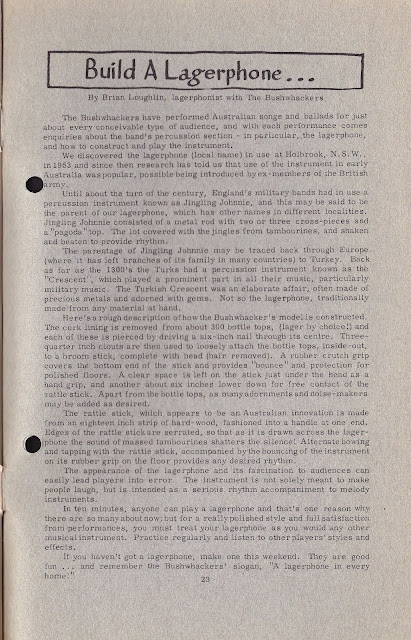 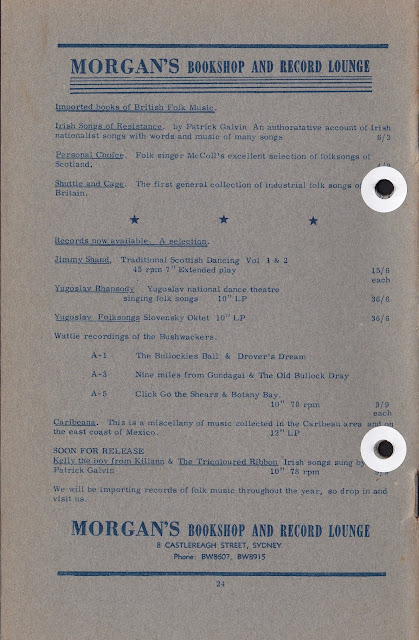