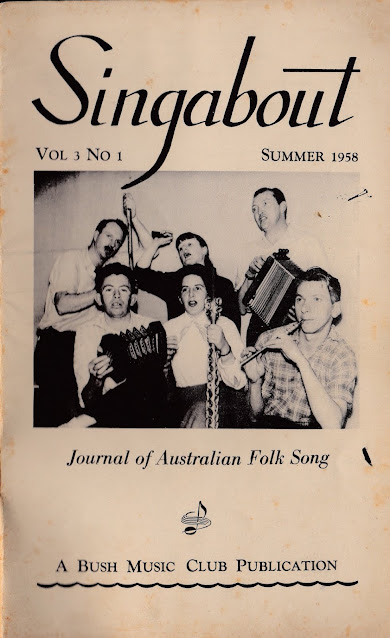 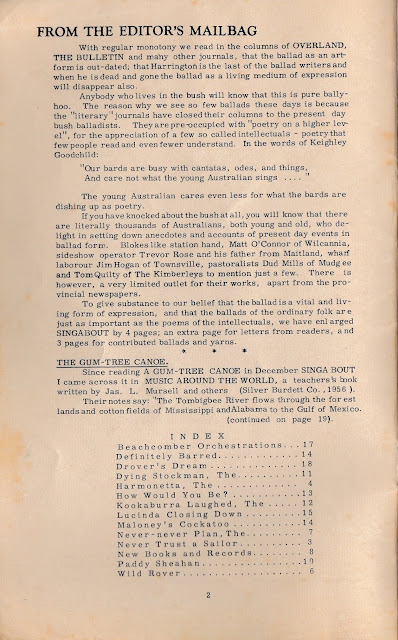 2.  Singabout - Volume 3(1), Summer 1958 - FROM THE EDITOR'S MAILBAG. With regular monotony we read in the columns of OVERLAND, THE BULLETIN and many other journals that the ballad as an artform is out-dated; that Harrington is the last of the ballad writers and when he is dead  and gone the ballad as a living medium of expression will disappear too ... The reason we see so few ballads these days is because the "literary" journals have closed their columns to present day balladists ... If you have knocked about the bush at all, you will know there are literally thousands of Australians, both young and old who delight in setting down anecdotes and accounts of present day events in ballad form. Blokes like station hand Matt O'Connor of Wilcannia, sideshow operator Trevor Rose and his father from Maitland, wharf labourer Jim Hogan of Townsville, pastoralists Dud Mills from Mudgee and Tom Quilty of The Kimberleys just to mention a few. ... we have enlarged SINGABOUT by 4 pages; an extra page of letters from readers,and 3 pages for contributed ballads and yarns.  THE GUM TREE CANOE ...  found in MUSIC AROUND THE WORLD by Jas. L. Mursell and others (Silver Burdett Co, 1956) about the Tombigbee River in America, letter cont. on  p.19.  INDEX 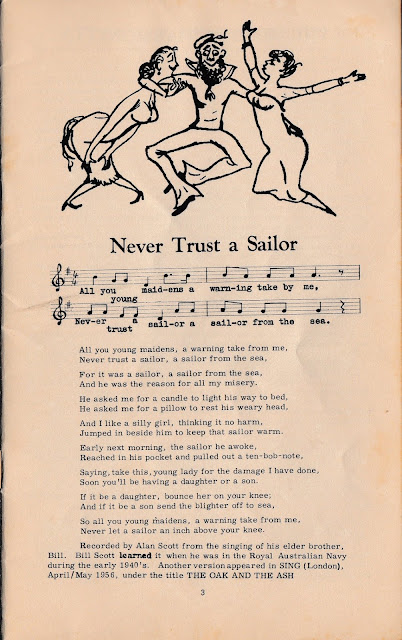 3.  Singabout - Volume 3(1), Summer 1958 -  Never trust a sailor . Recorded by Alan Scott from the singing of his older brother Bill who learned when he was in the Royal Australian Navy during the early 1940's. Another version appeared in SING (London) April/May 1958 under the title THE OAK AND THE ASH. 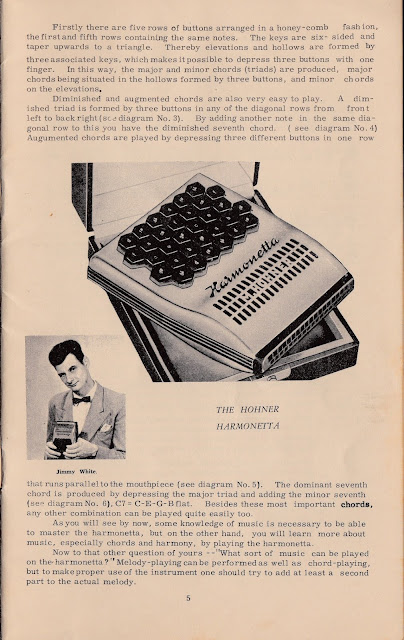 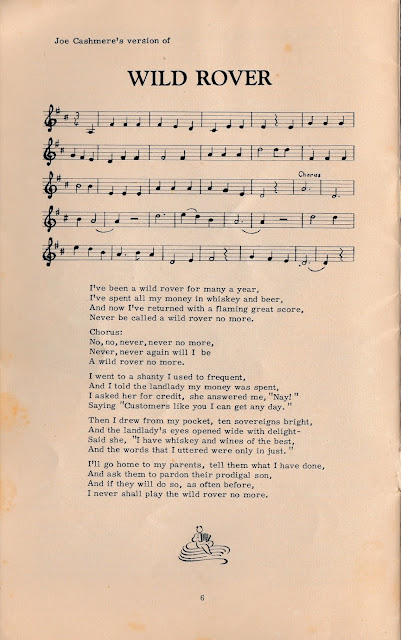 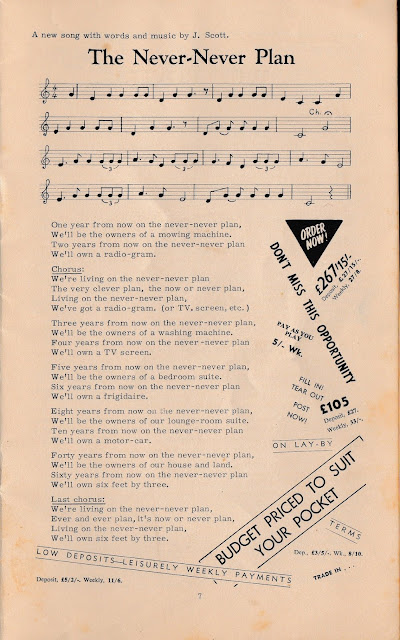 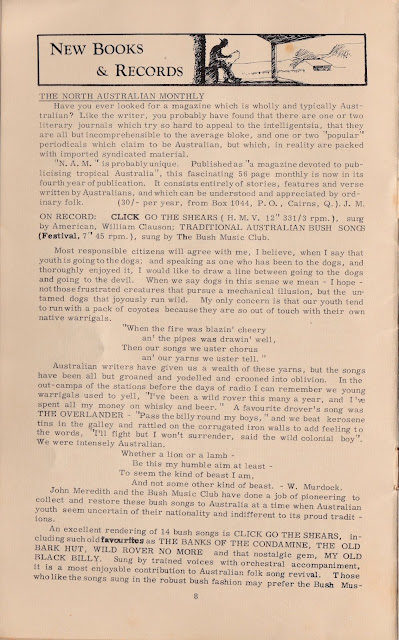 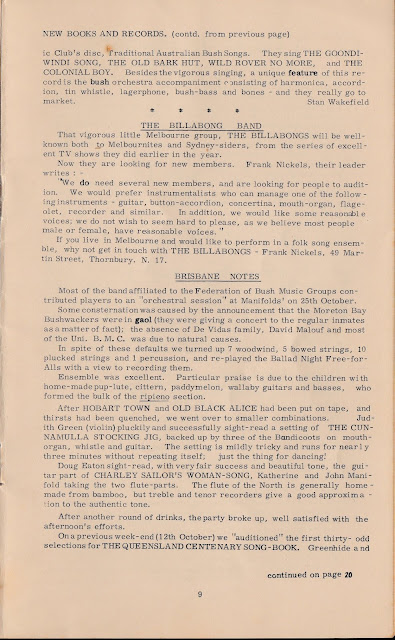 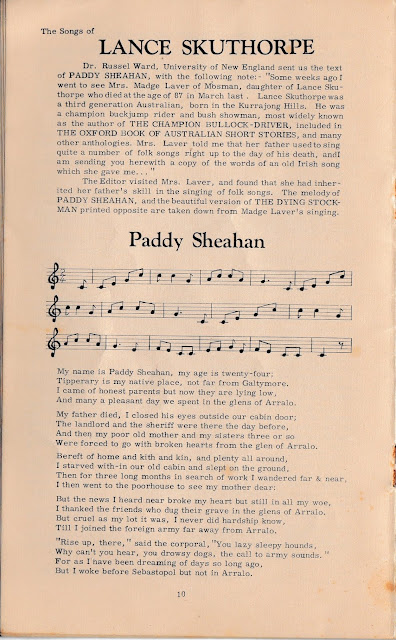 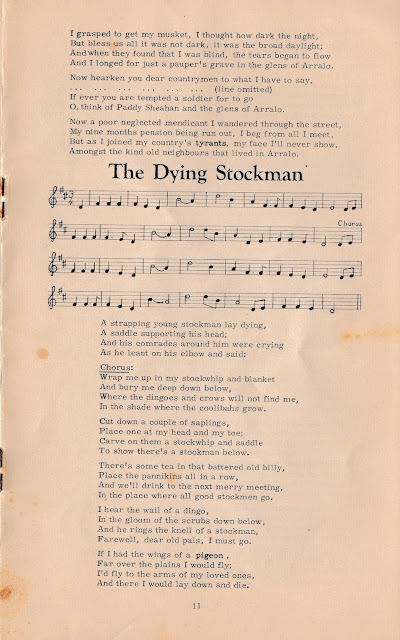 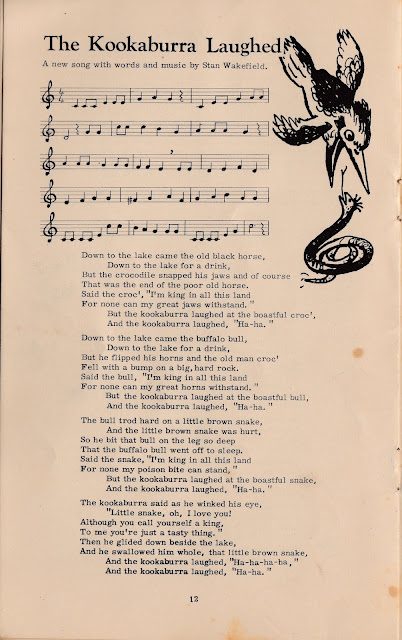 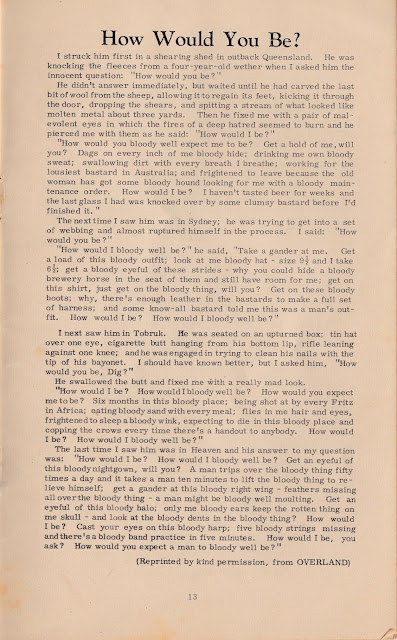 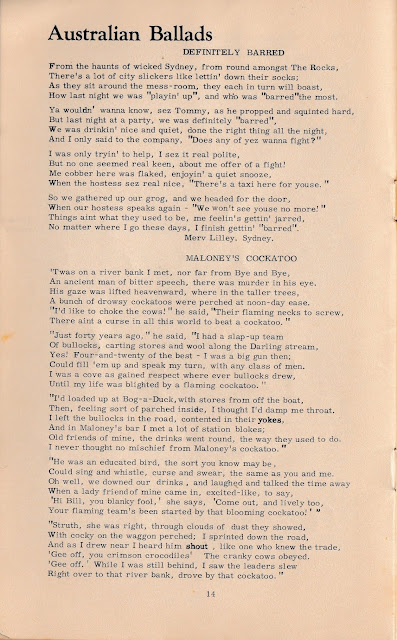 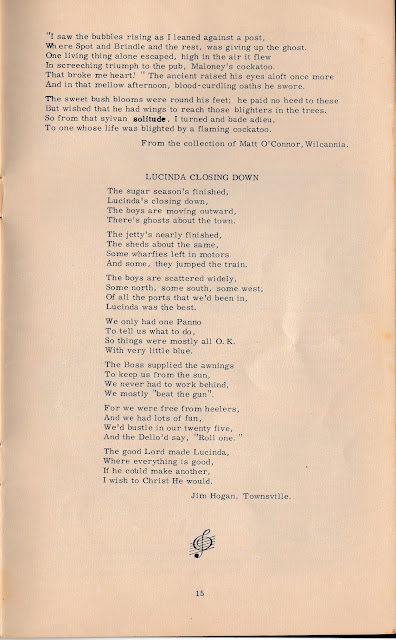 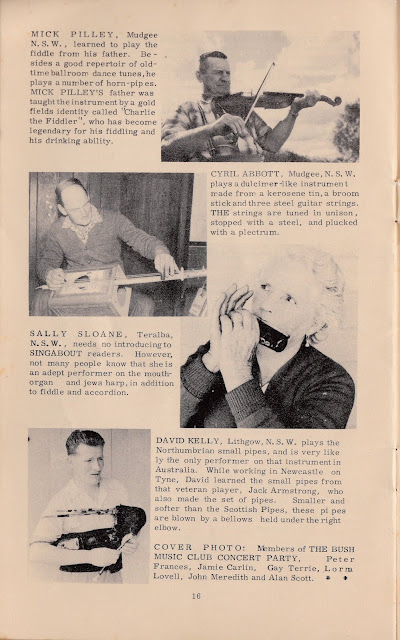 16.  Singabout - Volume 3(1), Summer 1958 - MICK PILLEY, Mudgee, NSW learned to play the fiddle from his father ... who was taught by a goldfields identity named "Charlie the Fiddler"  ...
CYRIL ABBOTT, Mudgee, NSW plays a dulcimer-like instrument made from a kerosene tin, a broom stick and steel guitar strings tuned in unison, stopped with a steel, and plucked with a plectrum.
SALLY SLOANE, Teralba, NSW, needs no introduction to Singabout readers. However not many people know she is an adapt performer on the mouth-organ and jews harp, in addition to fiddle and accordion.
DAVID KELLY, Lithgow, NSW, plays the Northumbrian small pipes ... While working in Newcastle on Tyne, David learned the small pipes from that veteran player, Jack Armstrong, who also made the set of pipes ... 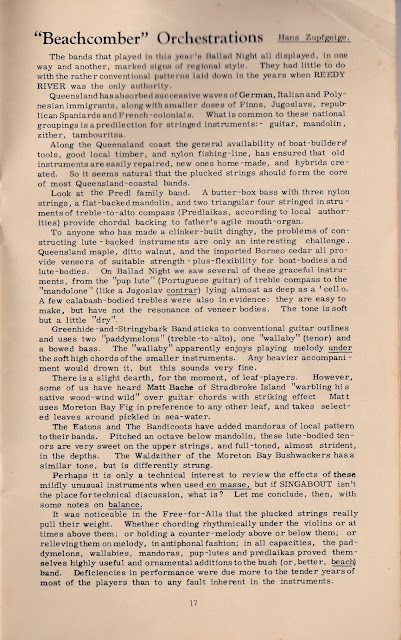 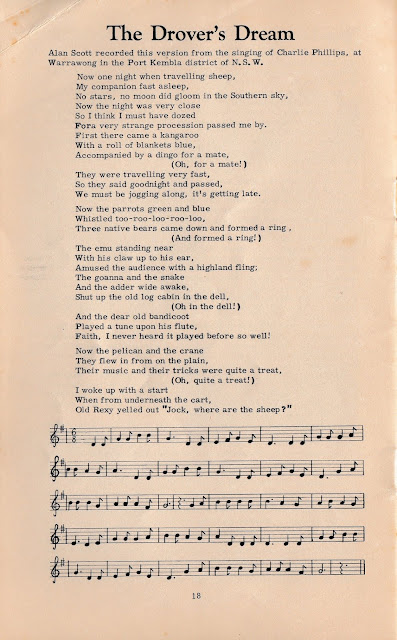 18.  Singabout - Volume 3(1), Summer 1958 - The Drover's Dream. Alan Scott recorded this version from the singing of Charlie Phillips, of Warrawong in the Port  Kembla district of N.S.W. 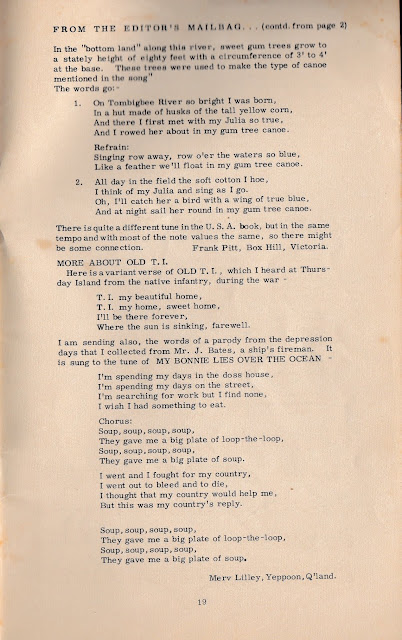 19.  Singabout - Volume 3(1), Summer 1958 - FROM THE EDITOR'S MAILBAG (cont) Letter re GUM TREE CANOE (cont) from Frank Pitt, Box Hill, Victoria.  Variant verse for OLD T.I. & parody from the Depression days collected from Mr J. Bates, a ship's fireman sung I'M SPENDING MY DAYS IN THE DOSS HOUSE, to the tune of My bonnie lies over the ocean, both submitted by Merv Lilley, Yeppoon, Q'land. 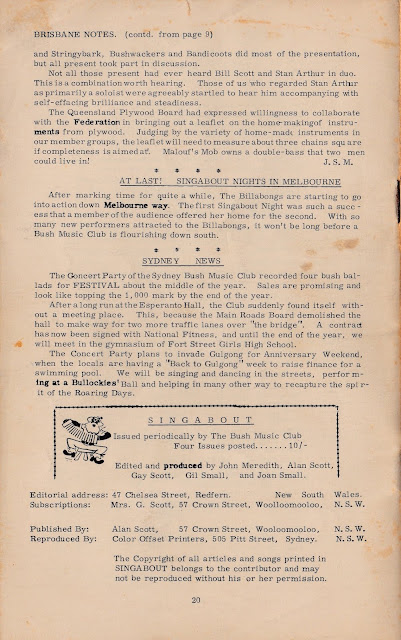 20.  Singabout - Volume 3(1), Summer 1958 - AT LAST! SINGABOUT NIGHTS IN MELBOURNE, After marking time for quite a while, the Billabongs are starting to go into action down Melbourne way. The first Singabout Night was such a success that a member of the audience offered her home for the second. With so many new performers attracted to the Billabongs, it won't be long before a Bush Music Club is flourishing down south.
SYDNEY NEWS - Concert Party recorded four bush ballads for Festival. Sales are promising and look like topping the 1,000 mark by the end of the year.  After a long run at the Esperanto Hall, the Club suddenly found itself without a meeting place. This, because the Main Roads Board demolished the hall to make way for two more lanes over "the bridge." A contract has now been signed with National Fitness, and until the end of the year, we will meet in the gymnasium of Fort Street Girls High School.  The Concert Party plans to invade Gulgong for Anniversary Weekend, when the locals are having a "Back to Gulgong" week to raise funds for a swimming pool. We will be singing and dancing in the streets, performing at a Bullockies Ball and helping in many other ways to recognise the spirit of the Roaring Days.
SINGABOUT edited & produced by John Meredith, Alan Scott, Gay Scott, Gil Small, and Joan Small.  Subsciptions Mrs Scott. Published by Alan Scott.The copyright of all articles and songs printed in SINGABOUT belongs to the contributor and may not be reproduced without his or her permission.