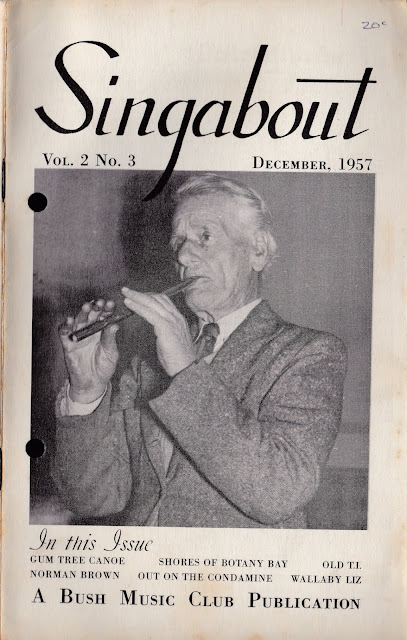 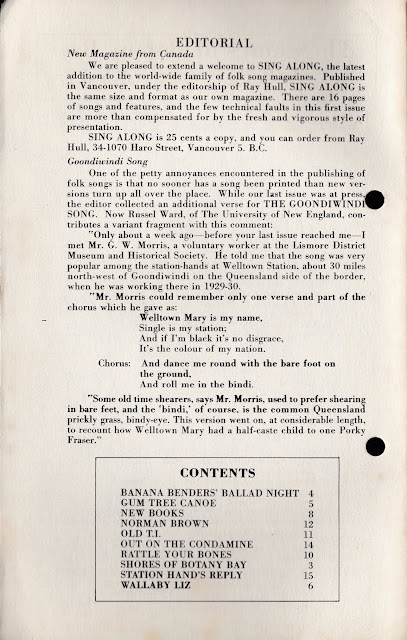 2.   Singabout, Volume 2(3), December 1957 - EDITORIAL - New magazine from Canada ... SING ALONG.  Goondiwindi Song - One of the petty annoyances encountered in the publishing of folk songs is that no sooner has a song been printed that new versions turn up all over the pale. While our last issue was at press the editor collected an additional verse .. Now Russel Ward at the University of New England contributes a variant fragment ...  CONTENTS 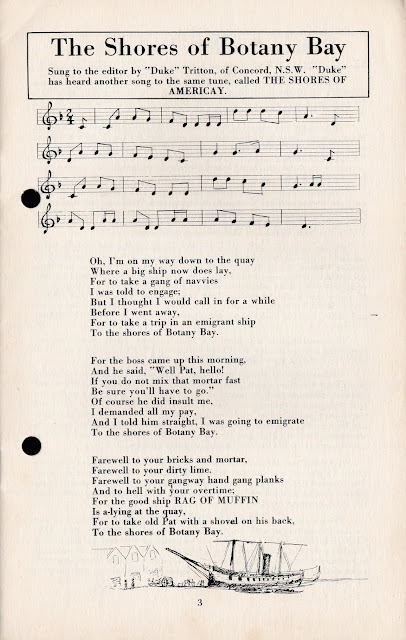 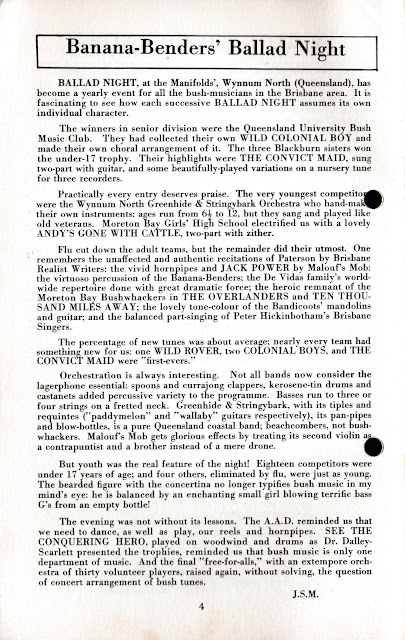 4.   Singabout, Volume 2(3), December 1957 - Banana-Benders Ballad Night. Ballad night at the Manifold's Wynnum North (Q) has become an annual event for all the bush-musicians in the Brisbane area.  ... Queensland University Bush Music Club ... collected their own WILD COLONIAL BOY.  ... Blackburn sisters won the under-17 trophy with CONVICT MAID. ... Practically every entry deserves praise.  The very youngest competitors were the Wynnum North Greenhide & Stringybark Orchestra who hand-made their own instruments, ages range from 6 to 12.  ... Morton Bay Girls High School electrified us with a lovely ANDY'S GONE WITH CATTLE, two-part with zither. ... Flu cut down the adult teams ...  One remembers the unaffected and authentic recitations of Paterson by Brisbane Realist Writers: the vivid hornpipes and JACK POWER by Malouf's Mob; the virtuoso percussion of the Banana-Benders: the De Vidas' family's world-wide repertoire done with great dramatic force: the heroic remnant of the Morton Bay Bushwhackers in THE OVERLANDERS  and TEN THOUSAND MILES AWAY: the lovely tone-colour of the Bandicoots mandolins and guitars: and the balanced part-singing of Peter Hickinbotham's Brisbane Singers.  ... nearly very team had something new for us: one WILD ROVER, two COLONIAL BOYS, and THE CONVICT MAID were "first-evers"  ... Not all bands now consider the lagerphone essential; spoons and currajong clappers, kerosene-tin drums and castanets added percussive variety to the programme.  ...  But youth was the real feature of the night! Eighteen competitors were under 17 years of age; and four others eliminated by flu, were just as young. The bearded figure with the concertina no longer typifies bush music in my mind's eye: he is balanced by an enchanting small girl blowing terrific bass G's from an empty bottle.  ...  The evening was not without it's lessons. The A.D.D. reminded us we need to dance as wall as play ... 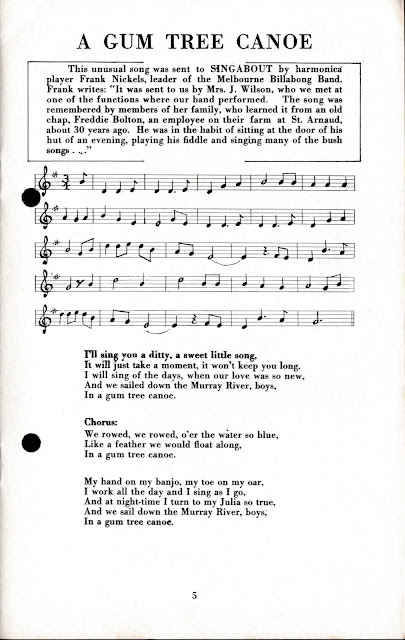 5.   Singabout, Volume 2(3), December 1957 - A GUM TREE CANOE - this unusual song was sent to SINGABOUT by Frank Nickel, leader of the Melbourne Billabong Band. Frank writes "It was sent to us by Mrs J. Wilson who we met at one of the functions where our band has performed. The song was remembered by members of her family, who learned it from an old chap, Freddie Bolton, en employee on their farm at St. Arnaud about 30 years ago. He was in the habit of sitting at the door of his hut of an evening, playing his fiddle and singing many of the bush songs" 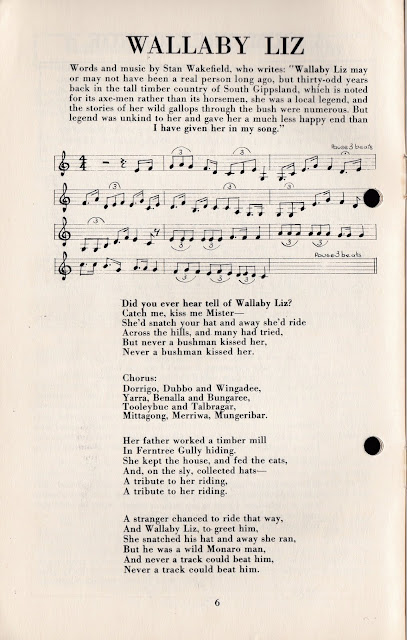 6.  Singabout, Volume 2(3), December 1957 - WALLABY LIZ  words and music by Stan Wakefield, who writes Wallaby Liz may of may not have been a real person long ago, but thirty-odd years back in the tall timber country of South Gippsland, which is noted for it's axemen rather than horsemen, she was a local legend and the stories of her wild gallops through the bush were numerous. But legend was unkind to her and gave her a much less happy end than I have given her in my song. 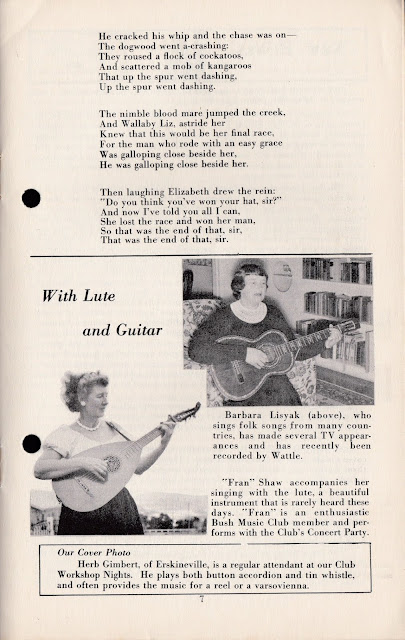 7.  Singabout, Volume 2(3), December 1957 - WALLABY LIZ  (cont). With lute and guitar. Barbara Lisyak (above) who sings folk songs from many countries, has made several TV appearances and has recently been recorded by Wattle. "Fran" Shaw accompanies her singing with the lute, a beautiful instrument that is rarely heard these days. "Fran" is an enthusiastic Bush Music Club member and performs with the Club's Concert Party. Our Cover Photo - Herb Gimbert , of Erskineville, is a regular attendant at out Club Workshop nights. He plays both button accordion nd tin whistle, and often provides the music for a reel or a varsovienna. 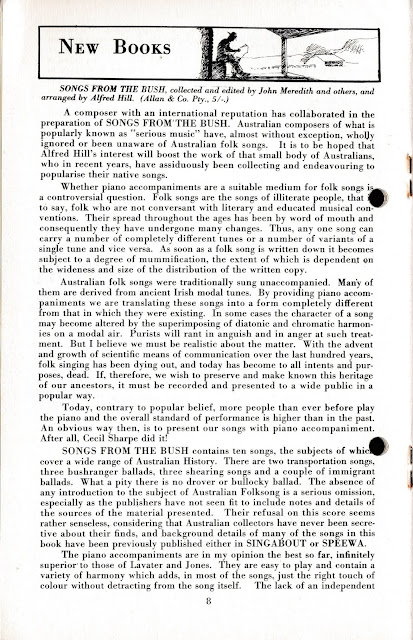 8.   Singabout, Volume 2(3), December 1957 - NEW BOOKS - Songs from the Bush, collected & edited by John Meredith and others, and arranged by Alfred Hill. (Allen & Co Pty, 5/-) A composer with an international reputation has collaborated in the preparation of SONGS FROM THE BUSH. Australian composers of what is popularly known a"serious music" have, almost without exception, wholly ignored or been unaware of Australian folk songs. It is to be hoped that Alfred Hill's interest will boost the work of that small body of Australians who in recent years have assiduously been collecting and endeavouring to popularise their native songs ... 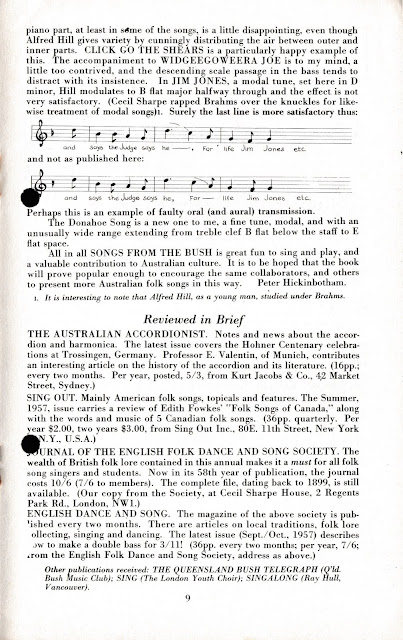 9.   Singabout, Volume 2(3), December 1957 - Songs from the Bush, (cont)  ... All in all, Songs from the Bush, is great fun to sing and play, and a valuable contribution to Australian culture. It is to be hoped that the book will prove popular enough to encourage the same collaborators, and others to present more Australian folk songs in this way.  Peter Hickinbotham   Reviewed in Brief - THE AUSTRALIAN ACCORDIONIST. Notes and news about the accordion and harmonica, available from Kurt Jacobs & Co, Sydney. SING OUT - Mainly American folk songs, topicals and features, available from Sing Our Inc, New York. JOURNAL OF THE ENGLISH FOLK DANCE AND SONG SOCIETY. The wealth of British folk lore contained in this annual makes it a must for all folk singers nd students. Now in it's 58th year ...  available from Cecil Sharp House, London. ENGLISH DANCE AND SONG. The magazine of the the above society is published every two months. Other publications received - THE QUEENSLAND BUSH TELEGRAPH (Q'ld Bush Music Club), SING (The London Youth Choir), SINGALONG  (Ray Hull, Vancouver) 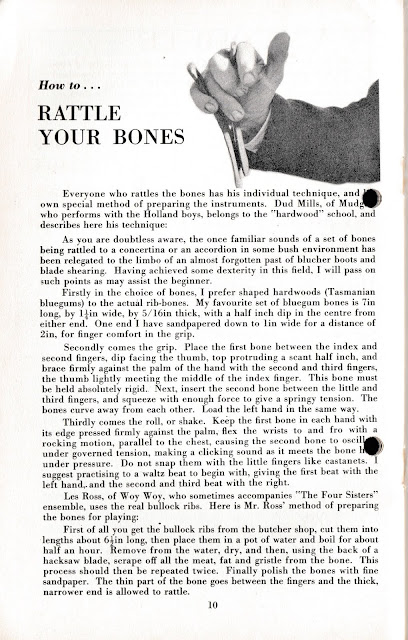 10.  Singabout, Volume 2(3), December 1957 - How to RATTLE YOUR BONES. Everyone who rattles the bones has his individual technique and his on special method of preparing the instruments. Dud Mills of Mudgee who performs with the Holland boys, belongs to the "hardwood"school and describes here his techniques:  ...
Les Ross of Woy Woy who sometimes accompanies "The Four Sisters" ensemble, use the real bullock ribs.  Here is Mr. Ross' method of preparing the bones for playing ... 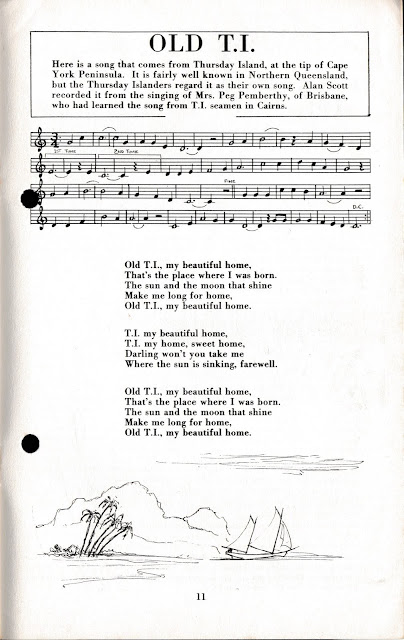 11.   Singabout, Volume 2(3), December 1957 - OLD T.I. Here is a song that comes from Thursday Island, at the tip of Cape York Peninsular. It is fairly well known in Northern Queensland, but the Thursday Islanders regard it as their own song. Alan Scott recorded it from the singing of Mrs Peg Pemberthy of Brisbane, who had learned the song from T.I. seamen in Cairns. 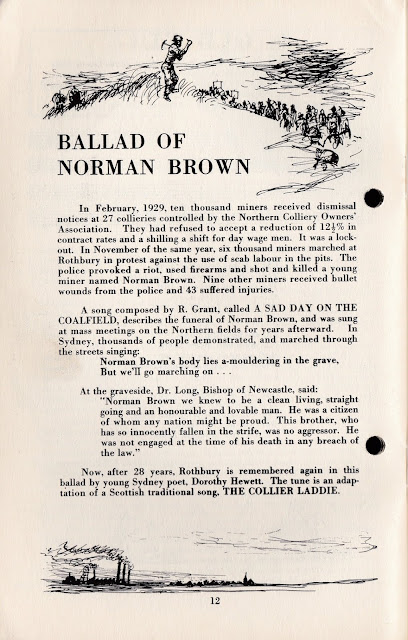 12.   Singabout, Volume 2(3), December 1957 - BALLAD OF NORMAN BROWN. In February 1929 ten thousand miners received dismissal notices at 27 collieries controlled by the Norther colliery Owners' Association ... In November of the same year six thousand miners marched at Rothbury in protest against the use of scab labour in the pits. The police provoked a riot, used firearms and killed a young miner named Norman Brown ... A song composed by R. Grant called A SAD DAY ON THE COALFIELDS describes the funeral of Norman Brown and was sung for years afterward ...   "He was not engaged at the time of his death in any breach of the law"  Now after 28 years Rothbury is remembered again in this ballad by a young Sydney poet, Dorothy Hewett. The tune is an adaption of a traditional Scottish song. THE COLLIER LAD. 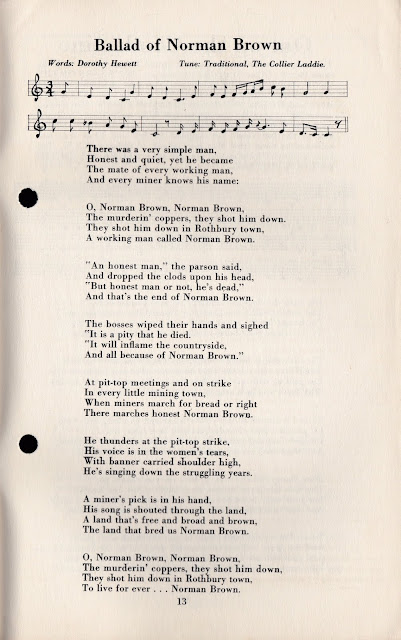 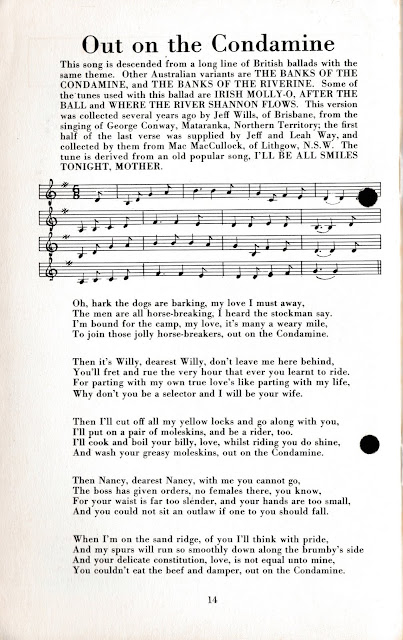 14.   Singabout, Volume 2(3), December 1957 - OUT ON THE CONDAMINE - This song is descended from a long line of British ballads with the same theme. 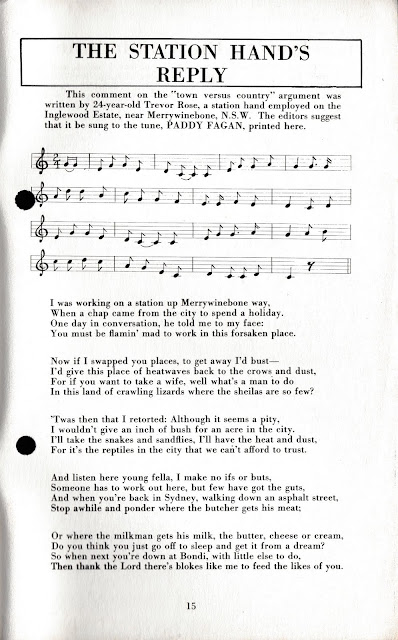 15.   Singabout, Volume 2(3), December 1957 - THE STATION HAND'S REPLY - This comment on the "town verses country" argument was written by 24-year old Trevor Rose, a station hand employed on the Inglewood Estate, near Merrywinebone, NSW. The editors suggest it be sung to the tune PADDY FAGAN, printed here. 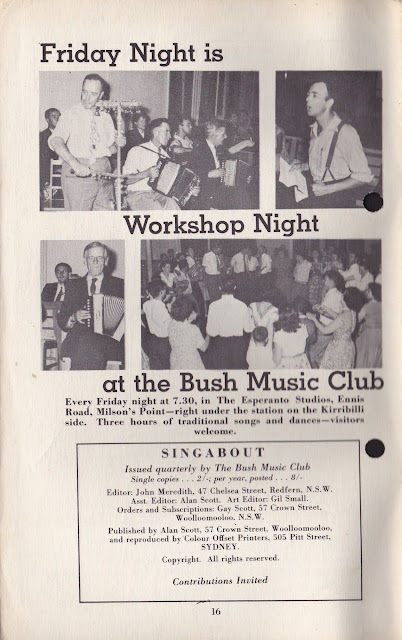