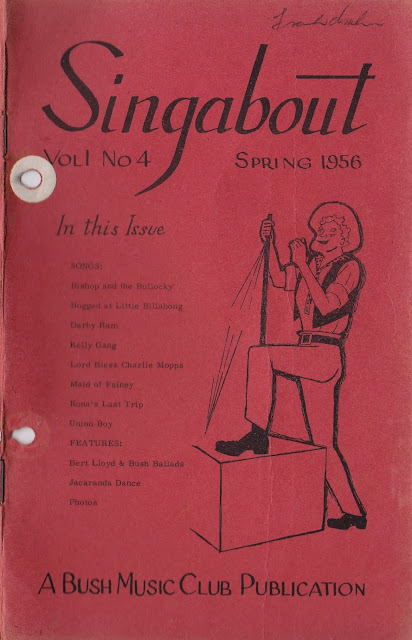 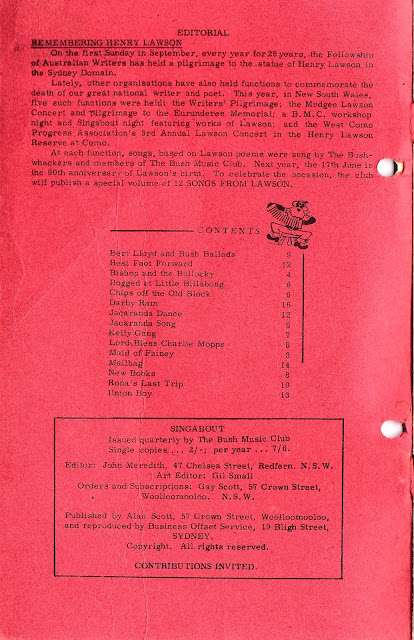 2.  Singabout, Volume 1(4), Spring 1956 - EDITORIAL - Remembering Henry Lawson. On the first Sunday in September, every year for 28 years the Fellowship of Australian Writers has held a pilgrimage to the statue of Henry Lawson in the Sydney Domain.  Lately other organisations have also held functions to commemorate the death of our great national writer and poet. This year in NSW five such functions were held: the Writers' Pilgrimage; the Mudgee Concert and Pilgrimage to the Eurunderee Memorial; a BMC workshop night and Singabout night featuring works of Lawson and the West Como Progress Association's 3rd Annual Lawson Concert in the Henry Lawson Reserve at Como.  At each function, songs, based on Lawson poems were sung by The Bushwhackers and members of the Bush Music Club.  Next year, the 17th June is the 90th Anniversary of Lawson's birth. To celebrate rth occasion, the club will publish a special volume of 12 Songs from Lawson.  CONTENTS list.    SINGABOUT.  Issued quarterly. Editor John Meredith. Orders & Subscriptions Gay Scott.  Artwork and layout Gil Small.  Published by Alan Scott. 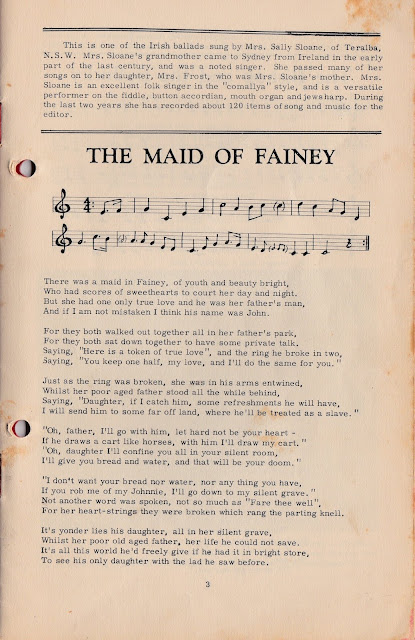 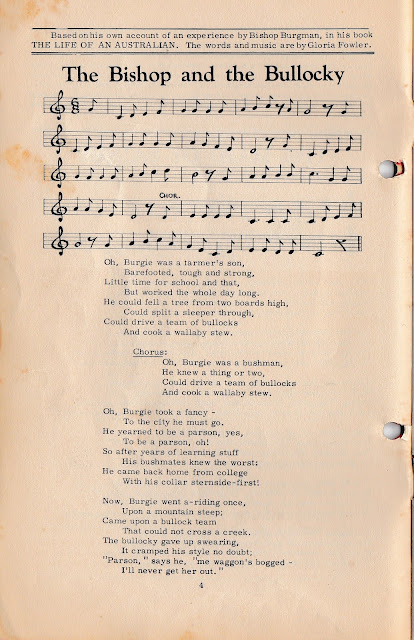 4.   Singabout, Volume 1(4), Spring 1956 - The Bishop and the Bullocky. Based on his own account of an experience by Bishop Burgman, in his book THE LIFE OF AN AUSTRALIAN. The words and music are by Gloria Fowler. 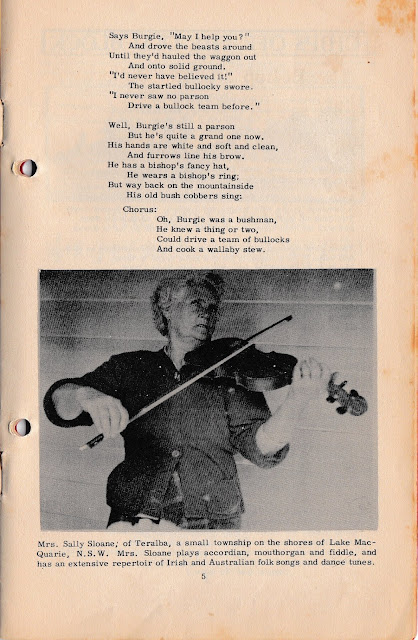 5.   Singabout, Volume 1(4), Spring 1956 - The Bishop and the Bullocky. (cont). Photo of Mrs Sally Sloane of Teralba, a small township on the shores of Lake Macquarie, N.S.W. Mrs Sloane plays accordion, mouthorgan and fiddle, and has an extensive repertoir of Irish and Australian folk songs and dance tunes. 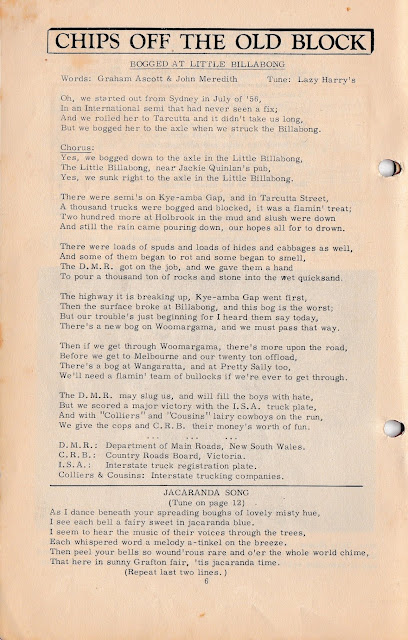 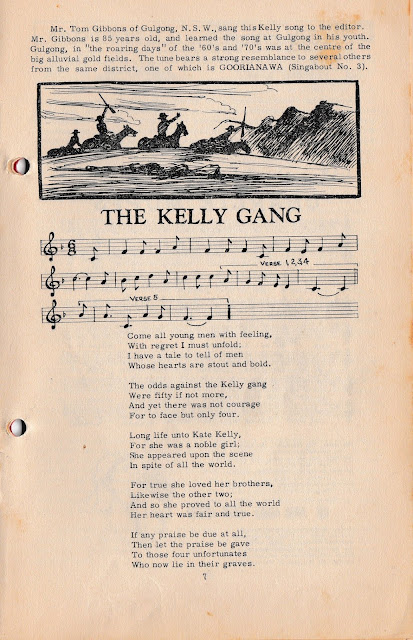 7.   Singabout, Volume 1(4), Spring 1956 - The Kelly Gang. Mr Tom Gibbons of Gulgong sang this song to the editor. Mr Gibbons is 85 years old, and learned the song in his youth. Gulgong in the "roaring days" of the '60's and 70's was at the centre of the big alluvial gold fields. The tune bears a strong resemblance to several others from the same district, one of which is GOORIANAWA (Singabout no.3) 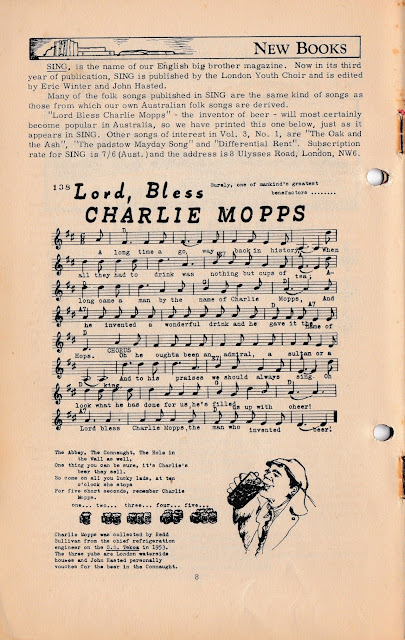 8.   Singabout, Volume 1(4), Spring 1956 - SING is the name of our English big brother magazine. Now in it's third year of publication, SING is published by the London Youth Choir and edited by Eric Winter and John Hasted. Many of the folk songs printed in SING are the same type of songs as those from which our own Australian folk songs are derived. "Lord Bless Charlie Mopps" - the inventor of beer - will almost certainly become popular in Australia, so we have printed this one below, just as it appears in SING ...  Charlie Mopps was collected by Red Sullivan from the engineer on the S.S. Tekoa in 1953 ... 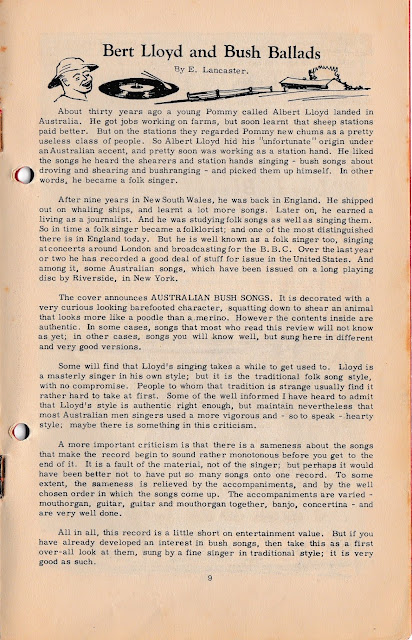 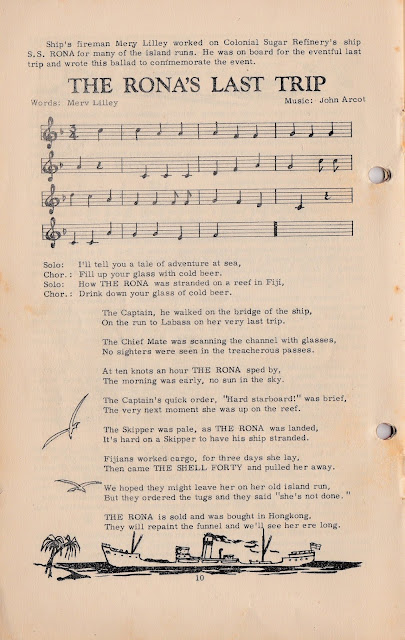 10.   Singabout, Volume 1(4), Spring 1956 - Ship's fireman Merv Lilley worked on Colonial Sugar Refinery's ship S.S. Rona for many of  the island runs. He was on board for the eventful trip and wrote this ballad to commemorate the event.  The Rona's Last Trip, words: Merv Lilley, tune: John Arcot. 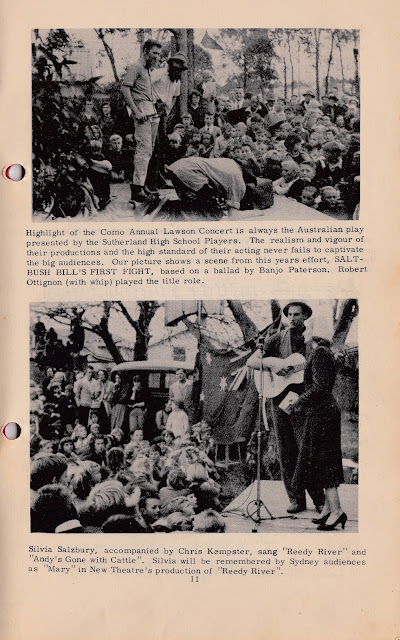 11.   Singabout, Volume 1(4), Spring 1956 - Highlight of the Como Annual Henry Lawson Concert is always the Australian play presented by the Sutherland High School Players ... Our picture shows a scene from this year's effort, SALTBUSH BILL'S FIRST FIGHT, based on a ballad by Banjo Paterson.  Silvia Salzbury (sic) accompanied by Chris Kempster, sang "Reedy River" and "Andy's Gone With Cattle" Silvia will be remembered by Sydney audiences in New Theatre's production of "Reedy River." 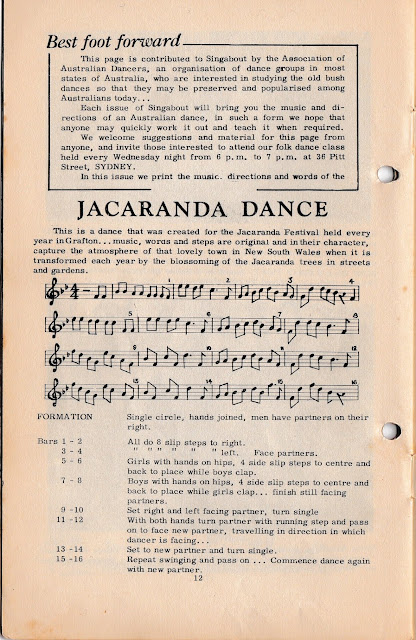 12.   Singabout, Volume 1(4), Spring 1956 - Best foot forward - Jacaranda Dance. This is a dance that was created for the Jacaranda Festival held every year in Grafton, music, words  and steps are original ... 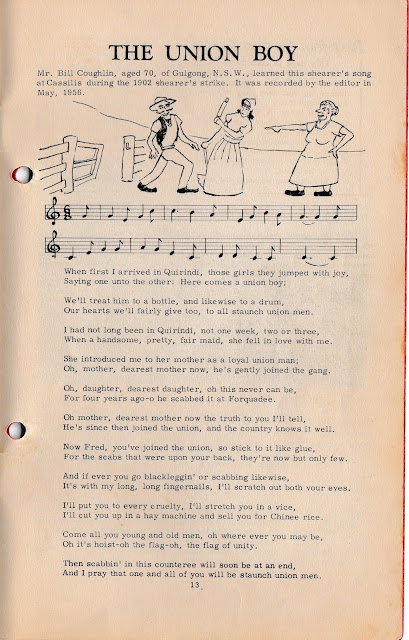 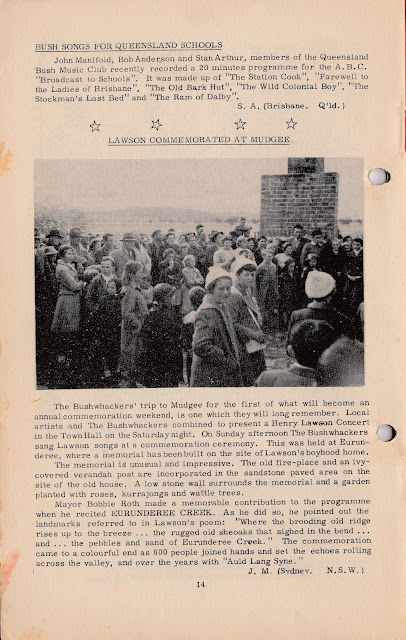 14.   Singabout, Volume 1(4), Spring 1956 - BUSH SONGS FOR QUEENSLAND SCHOOLS. John Manifold,  Bob Anderson and Stan Arthur, members of the Queensland Bush Music Club recently recorded a 20 minutes programme for the A.B.C. "Broadcast to Schools".  It was made up of "The Station Cook",  Farewell to the Ladies of Brisbane",  "The Old Bark Hut",  "The Wild Colonial Boy", "The Stockman's Last Bed", and "The Ram of Derby". 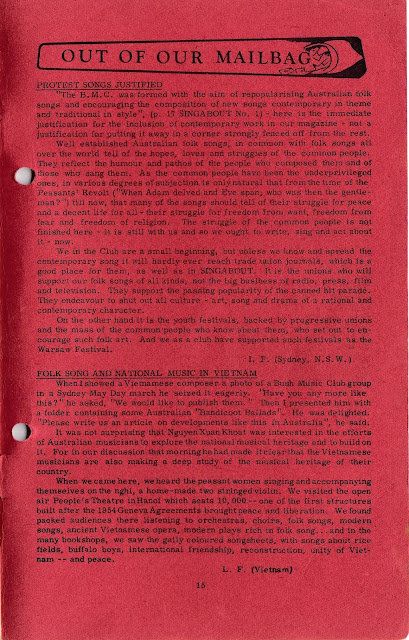 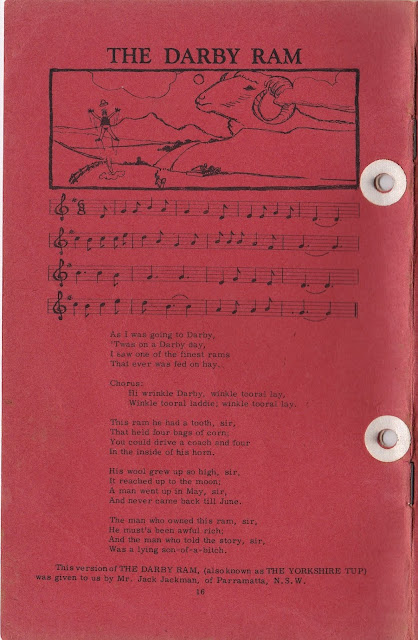