BLOG - Australian Colonial Dance - The History of Music and Dance in Australia, 1788-1840 by Heather Clarke

Australian Colonial Dance - The History of Music and Dance in Australia, 1788-1840


A collection of dances from the early Australian colonial era 1770-1850. This site reveals the history of dance in the first half of the colonial period exploring significant social and historical links.

In the modern age of intense electronic social networking, these dances shine as genuine, warm, social pleasures. Words are unnecessary while dancing, other skills are required – a smile, a glance, a touch. Could it be more different to social media on your smart phone?

In an evening of country dance one may have a dozen partners and dance with every person in the room; a group of individuals synchronised in the pattern of the dance.
Dance rates as one of the most beneficial forms of recreation:  it involves so many different aspects in such an enjoyable way. The exercise of moving through the dance, remembering the figures, listening and responding to the music, and above all, the myriad of friendly  interations.

The dance,  Port Jackson, was published in London in Thompson’s Twenty Four Country Dances for the Year 1796.  There were no particular events or theatre productions which might have drawn the colony into the public eye, providing an inspiration for this dance, in contrast to the dance Botany Bay.
~~~~~~~~~~~~~~~~~~~~~~~~~~~ 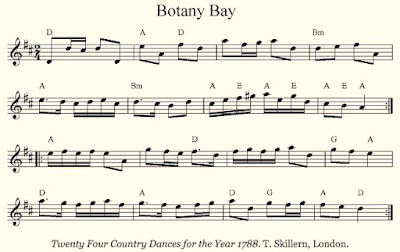 The whimsical idea of founding a settlement of convicts on the other side of the world prompted many humorous street ballads, an opera and this dance.
The new and favourite opera, Botany Bay was performed 24 times between April and August of 1787 at the Royal Circus Theatre, St George’s Fields, London.2

Reviews described it as interesting and the characters well supported 3,  ...partly moral and party comic, on the whole a good thing 4, and  The little opera, Botany Bay, may be alright for the holiday people [during Whitsun week], its passable for the Circus but not plot enough for the Royal Theatre. 5
~~~~~~~~~~~~~~~~~~~~~~~~~~~~~ 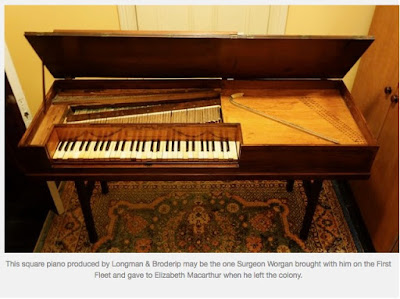 In London during the early 1760s small, rectangular, five octave keyboard instruments started to be produced. Unlike the harpsichord or spinet, these were capable of playing both loudly and softly – the forte piano or fortepiano. The demand for these small square pianos was enormous, and manufacturers began producing instruments in quantity.
George Worgan, a surgeon on the First Fleet HMS Sirius, brought a piano with him to Australia.  Although this may seem remarkable, music, song and dance were daily occurrences at all levels of society, even aboard ships of the British Navy. ~~~~~~~~~~~~~~~~~~~~~~~~~~~~~

Sailor's Hornpipe
January 21, 1788. The Governor accompanied by Capt. Hunter & some other officers went in Boats to examine Port Jackson ... The next day one of the Party took a fife on Shore played several tunes to the Natives who were highly delighted with it especially at seeing some of the Seamen dance.
The Complete Letters of Newton Fowell. 1786-1790. Midshipman & Lieutenant aboard the Sirius, Flagship of the First Fleet on its voyage to New South Wales. 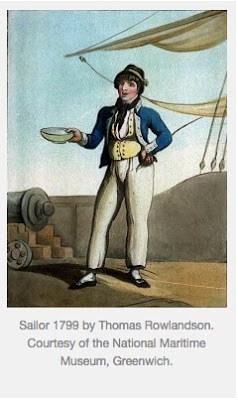 This is the earliest account of dancing in the new land – before the fleet anchored in Sydney Cove, before the convicts had disembarked, before the colony had been proclaimed – people were dancing.

It is likely the seamen were dancing a hornpipe, jig or reel to the music provided by one of the marines. Music for all official occasions, as well as informal events in the First Fleet, “fell under the aegis of the Marines who, in addition to providing a force of terrestrial and maritime ‘sea-soldiers’, supplied ships with drummers and pipers”.

Bundanoon DanceFest 2017 - scroll down to Dancing the hornpipe with Colin Townes - featuring Roland Clarke on fiddle! for back views of Heather dancing & Roland fiddling & dancing.

Email ThisBlogThis!Share to TwitterShare to FacebookShare to Pinterest
Labels: Dance