Click on pictures for full-screen image.
From the Harry Kay Collection 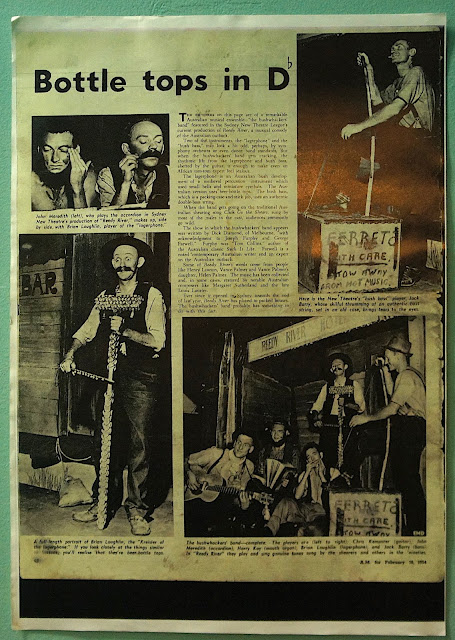 The pictures on this page are of a remarkable Australian musical ensemble "the Bushwhackers' Band" featured in the Sydney New Theatre League's current production of Reedy River, a musical comedy of the Australian outback.

Two of the instruments, the "lagerphone" and the "bush bass," may look a bit odd, perhaps, by symphony orchestra or even dance band standards but when the bushwhackers' bushwhackers band gets cracking, the rhythmic lift from the lagerphone and bush bass, abetted by the guitar, is enough to make even an African tom-tom expert feel jealous.

The lagerphone is an Australian bush development of a medieval percussion instrument which used small bells and miniature cymbals. The Australian version uses beer-bottle tops. The bush bass, which is a packing-case-and-stick job, uses an authentic double-bass string.

When the band gets going on the traditional Australian shearing song Click Go the Shears, sung by most of the males in the cast, audiences commonly go wild.

The show in which the Bushwhackers Band appear was written by Dick Diamond, of Melbourne, "with acknowledgment to Joseph Furphy and George Farwell." Furphy was "Tom Collins," author of the Australian classic Such Is Life. Farwell is a noted contemporary Australian writer and an expert on the Australian outback.

Some of Reedy River's words come from people like Henry Lawson, Vance Palmer and Vance Palmer's daughter, Helen Palmer. All music has been collected and, in some cases, restored by notable Australian composers like Margaret Sutherland and the late Louis Lavater.

Ever since it opened towards the end of last year, Reedy River has played to packed houses. The Bushwhackers Band probably has something to do with this fact. 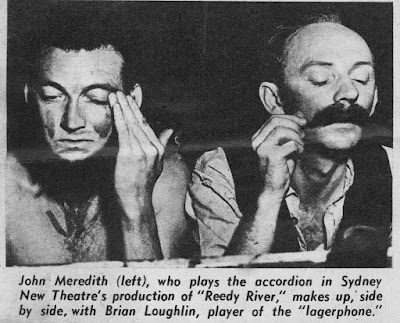 Caption 1: John Meredith (left), who plays the accordion in Sydney New Theatre's production of "Reedy River," makes up, side by side, with Brian Loughlin, player of the "lagerphone." 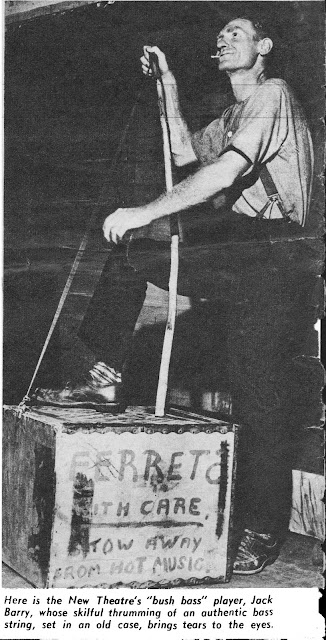 Caption 2: Here is the New Theatre's 'bush bass' player, Jack Barry, whose skilful thrumming of an authentic bass string, set in an old case, brings tears to the eyes.

Caption 3: A full-length portrait of Brian Loughlin, the "Kreisler of the logerphone." If you look closely at the things similar to buttons, you'll realise that they're beer-bottle tops. 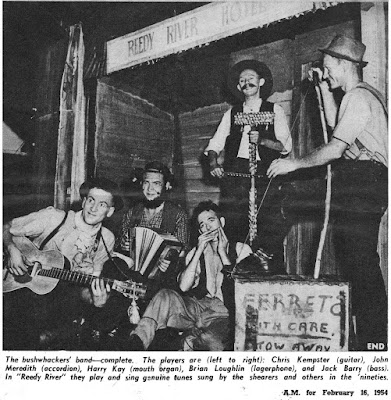 Caption 4: The bushwhackers' band — complete. The players are (left to right): Chris Kempster (guitar), John Meredith (accordion), Harry Kay (mouth organ), Brian Loughlin (lagerphone), and Jack Barry (bass). In "Reedy River" they play and sing genuine tones sung by the shearers and others in the 'nineties.